Supernatural brings audiences the long awaited crossover with Scooby-Doo allowing Sam and Dean to team up with the Scooby Gang to solve an animated mystery.

If any show can get away with an idea as ludicrous as this one it’s Supernatural. Over its very long run this show has become famous for taking ideas that shouldn’t work and turning them into classics in the eyes of many fans. Speaking as a fan, the ability to shamelessly attempt anything and make it work is one of the reasons I love this show so much and this episode is a perfect example of that. 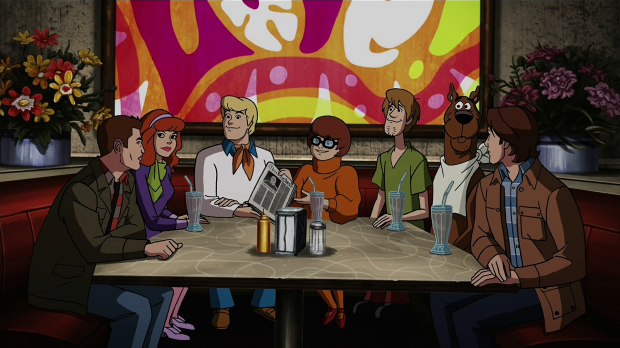 All told this episode could be considered filler in some ways because it has absolutely nothing to do with the rest of the season save for a quick mention of Castiel completing his mission and returning with fruit from the tree of life for the spell that will take them into the alternate world. Nothing else about the episode connects to anything that’s going on so from that point of view it’s disposable but if anyone decided to skip it for that reason then they would be missing out on something truly special.

The setup for this crossover is actually really simple showing that the writers wanted to waste no time in getting to the point. At the beginning of the episode Sam and Dean are fighting a possessed stuffed dinosaur which sets the tone for this episode wonderfully. It’s such a bizarre image and yet it works so well to establish that innocent things are about to become dangerous. This leads Sam and Dean to come into possession of a possessed TV that sucks them into the animated world of Scooby-Doo letting the episode fully begin.

Thirteen years of television have put Sam and Dean in a lot of crazy situations and there’s a real sense that this has made a difference to them in this episode as they both accept what has happened to them fairly quickly. Instead of spending a chunk of the episode confused as to why this is happening to them they accept that it is and move on. Dean in particular is very excited by the prospect especially when he realises that he is able to interact with the Scooby Gang. As with many episodes Sam and Dean embody a particular point of view with Sam being the frustrated, impatient one here and Dean being filled with childlike delight that one of his dreams is coming true. 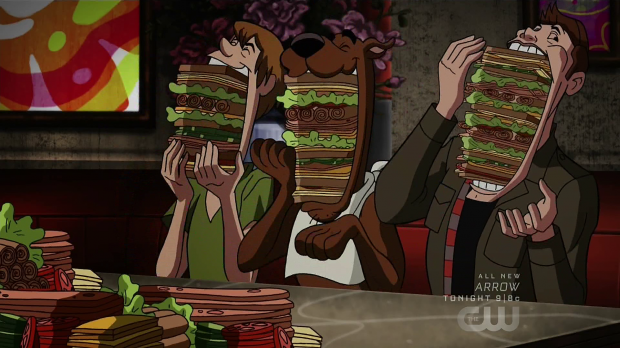 Their different positions on the situation are a great source of comedy. Sam spends a lot of the episode pointing out how ridiculous Scooby-Doo was as a cartoon and consistently points out the formula that has helped make the show remain so famous many decades later. Dean is always the one to shoot Sam down for ruining his fun. This never gets old throughout the episode as it makes great use of the comedic chops of both Jensen Ackles and Jared Padalecki who excel at line delivery here. Sam pointing out that the Scooby Gang walk away from dead bodies is brilliantly delivered and the general impatience is always hilarious. Castiel later turns up and starts off impatient but warms up to Shaggy and Scooby in particular when they apparently teach him the value of laughter in terrifying situations.

Dean’s justification for being so attached to Scooby-Doo makes a lot of sense when considering his upbringing. Being dragged around the country on various hunts with their Dad and having nothing more than a TV for company most of the time meant that he had to watch a lot of TV to pass the time. He sees Scooby-Doo as one of the few consistent things in a life filled with inconsistencies so his attachment is a very relatable one and echoes the reasons many people are attached to their own nostalgia. Like Dean many people take comfort in something that was always there for them even if it was fictional, formulaic and animated. Anything that brings someone comfort is valid and it’s clear that this brings Dean comfort so his attachment is entirely genuine.

I also like that Dean recognises the similarities between what the Scooby Gang do and what they do. They both solve mysterious, hunt ghosts -albeit fake in the Scooby Gangs case- and move from place to place. Many people have made comparisons between these two shows using those similarities so allowing Dean to acknowledge it and use it as a point of pride for him was a really nice touch. 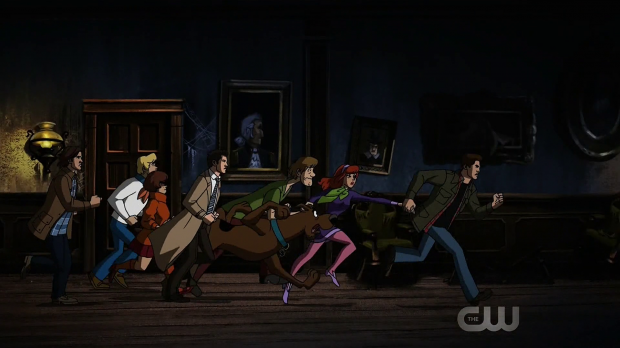 The Scooby Gang are written really well towing the line between being cartoonishly shallow and having some depth to speak of. Fred (Frank Welker) is the fearless infectiously positive leader, Velma (Kate Micucci) is the smart one who is the voice of reason, Daphne (Grey Griffin) is the pretty one, Shaggy (Matthew Lillard) is a ravenous coward and Scooby (Frank Welker) is the adorably awkward cowardly dog he has always been. Some depth is given to them as the episode progresses but there’s a lot of comedy to be had in their largely stock responses to what Sam and Dean say. They are always very receptive to what they suggest and present no barriers to the plot progressing.

This episode does a great job of delivering a traditional Scooby-Doo story with a Supernatural twist. Dean identifies that they are in a specific episode from the show’s first season called “A Night of Fright is No Delight” which means that he thinks he knows exactly how things will play out and is happy to go along for the ride to simply enjoy being a part of it. Of course things become more complicated when people actually start dying and it becomes clear that the ghostly presence is actually a real one.

Once it becomes apparent that the ghost is real the episode uses this as a way to make a comment on the corruption of childhood innocence. Despite the broad strokes similarities between the two shows Supernatural is a show targeted for adults and Scooby-Doo was very much for kids so there is a major difference in demographic there and letting the crossover acknowledge that is great. Dean doesn’t want to corrupt the Scooby Gang by letting them know that the Supernatural really exists. The reactions of the characters once they do learn the truth are exaggerated by indicative of what Dean feared would happen. Having them hunt a real ghost makes things a little too real as shown by Velma’s real terror, Shaggy’s broken arm, Fred feeling that he has wasted his life outing fakes and Daphne’s contemplation of Heaven and Hell being things that exist. 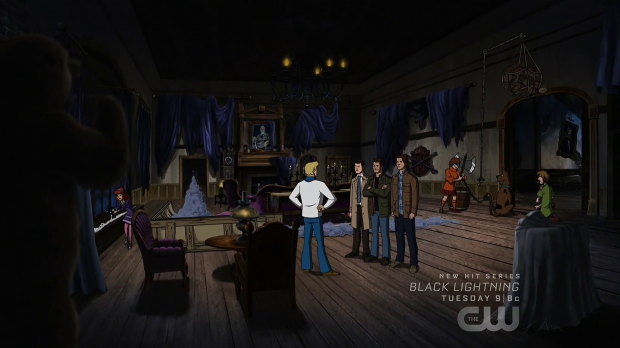 Towards the end of the episode Sam and Dean spare the Scooby Gang from experiencing the reality of the supernatural therefore preserving that innocence. This is very much a commentary on how things change for people as they get older and perhaps a jab at constant rebooting of things that may have been fine the way they were. This episode is very much a love letter to the original Scooby-Doo show and makes a case for how timeless its charm is. As far as Dean’s concerned it’s perfect the way it is and doesn’t need to be changed. Even if Dean does want to live out his fantasy of hooking up with Daphne his desire to preserve the innocence he remembers so fondly is clear.

The reveal that the ghost is a dead little boy (Kegan Frith) being used by a real estate developer using the restless spirit to scare people into selling their livelihoods works really well as it feels like a Scooby-Doo plot with a Supernatural edge to it. Revealing that the ghost isn’t innately evil is a nice touch as I always like when this show expands the morality of the threats that the Winchesters face. It also ties into the theme of corrupted innocence further linking the different parts of the story together. Letting the kid move onto the afterlife is an act of mercy on their part. There’s also no guilt associated with it as the kid hasn’t actually killed anyone outside of some animated characters though there is a strong implication that he has killed before that is largely glossed over.

As I’ve made clear this episode is a lot of fun and delights in exploring most of the tropes that Scooby-Doo has to offer in hilarious ways. Seeing Dean eat a sandwich that defies the laws of physics while delighting in how huge his mouth is was brilliant for example. We also see examples of them hiding in vases, corridors with doors that act as portals, newspapers with no writing, obvious clues that stand out from painted backgrounds and over-designed traps that don’t work. My one gripe is that Dean didn’t get to eat a Scooby Snack which is a baffling thing to leave out. Scooby-Doo is treated with affection and reverence as it should be because it was a landmark show and Scooby-Doo himself is an iconic character who has endured all this time. Perhaps in a few decades some other show will crossover with Supernatural with equal nostalgic affection. 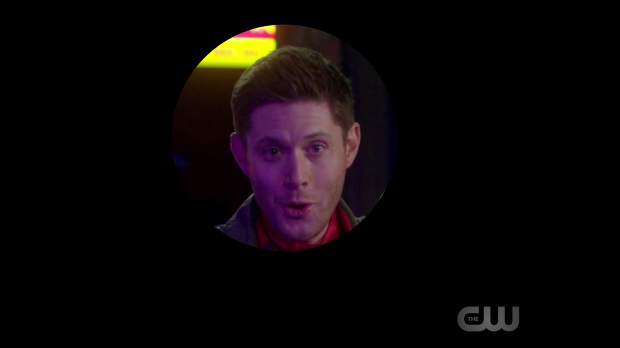 Dean wraps everything up

It may not further the plot of the season in any way but it’s a lot of fun all the same. As a crossover it works brilliantly as a way to highlight the similarities but also the differences between the two shows, make a comment on how important nostaligia is to some people and generally have a lot of fun with a silly concept. Sam and Dean occupying two different outlooks on the situation works well and adding Castiel into the mix adds is more than welcomed. The Scooby Gang are written well and the team-up has lots of opportunities for laughs by poking fun at how silly and formulaic Scooby-Doo was as a show.

Adding a Supernatural edge to the plot makes things interesting and revealing that the ghost was itself an example of corrupted innocence was a nice touch. This episode will likely be considered a classic one day and who knows, maybe in a few decades another show will crossover with Supernatural in an equally affectionate way.