“Somewhere Between Heaven and Hell”

Supernatural takes Sam and Dean on a Hell Hound hunt as Lucifer tries to find a way to escape Crowley’s clutches and Castiel is presented with an opportunity.

This episode opens in a way that could place it anywhere in the series. A cold open involving a couple who were about to experience something terrible is all too common in this show and it sets the tone for what coould be a fairly disposable episode. Interestingly the mystery can be largely removed from these thanks to the longevity of the series giving the viewer knowledge of how certain threats behave. 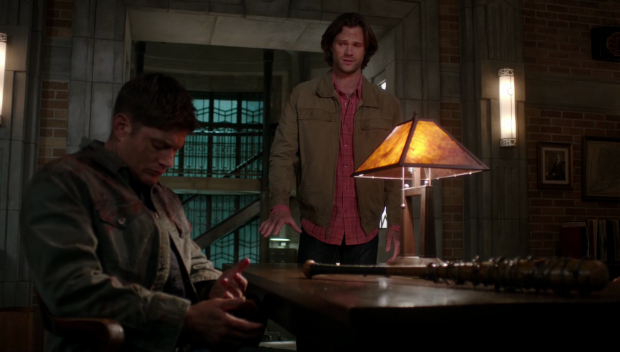 Where did Dean get that bat?

Having the problem be something we know well means that it becomes something that the episode doesn’t have to spend a lot of time on which leaves more time to spend on the background stories that are being built week to week. The case of the week wasn’t all that interesting from a mechanical point of view. Sam and Dean go through the usual motions of interviewing the girlfriend of the victim, realise what’s going on and then go about stopping the threat before anyone else gets hurt.

Even though the case wasn’t that interesting there were interesting things about it. The “girl of the week” -as Dean even calls her-, Gwen (Angelique Rivera) was good as one shot characters go. I liked the extra dimension to her relationship with her boyfriend who was killed by the Hell Hound. Having her feeling guilty because she was about to break up with him gave her some measure of depth that lets her stand apart. The episode does nothing with it really but it’s something that makes her more than a simple damsel in distress.

Another nice touch was Sam and Dean working with Crowley without any hidden agendas. There was something in it for both parties since this escaped Hell Hound was a mess that Crowley really needed to clean up in order to show that he’s the man in charge down in Hell. The highlight to this partnership was the back and forth between Crowley and Dean which even came with Crowley doing an impression of Dean in order to mock him. It’s a good way of showing the flirtatious antagonistic relationship they have as well as the history between the characters. 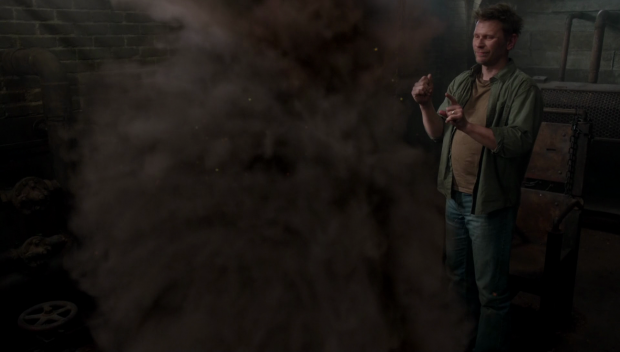 This is the latest in a string of back to back cases that the Winchesters have been dealing with. The episode establishes this brilliantly with Sam and Dean returning to the bunker after a particularly violent one where Dean is covered in pieces of the various things they have dealt with and brandishing a bat that is really reminiscent of Negan’s favoured weapon in The Walking Dead. It’s a nice meta touch to point out that it was something their Dad favoured.

It turns out that the recent abundance of cases is down to the intel given to Sam by the British Men of Letters. It’s a little frustrating that Sam lies to Dean about working with them but thankfully it doesn’t last too long and Dean’s reaction to it is a reasonable one. His willingness to trust Sam’s judgement and try it for a while shows a real maturity to Dean that has been growing in this season particularly. I’m sure there will be lots of conflict as a result of this partnership so I’m excited to see where it goes.

The escaped Hell Hound ties into the larger story by revealing that it was a distraction staged by Crowley’s lackeys so that they could free Lucifer in the hopes of being given better treatment by him than they get from Crowley. It completely backfires and Lucifer kills them both but it was a solid idea. I like how bureaucratic Hell is and how fed up Crowley seems to be with it. He also seems to have a tenuous hold on it that could lead to some kind of mutiny against him next season. 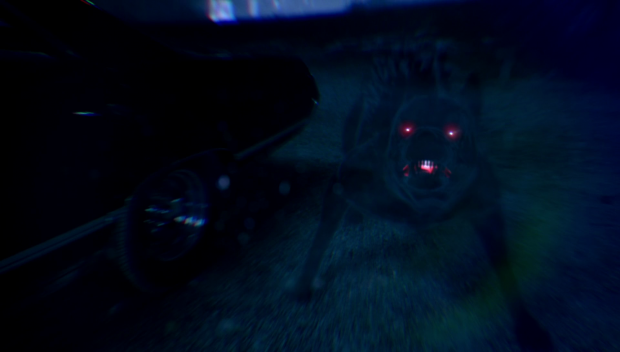 It was good to see Lucifer back in badass mode when he thought he was free and it looked like Crowley was in a lot of trouble at that point. The reveal that Crowley’s words were more meaningful than anyone could have imagined was a really satisfying twist. Specifically the wording about Crowley making Lucifer his slave proved to have the best pay-off. Lucifer’s chains were all for show because the vessel he’s in turns out to be the real prison. Crowley engineered it to give him complete control over Lucifer and takes great delight in showing it. Mark Pellegrino’s performance when Lucifer realises how helpless he is is perfect and I’m really interested to see how this dynamic will develop. A neutered Lucifer can only go so far in the show but there is still potential to be mined from it.

Castiel is faced with the possibility of redemption; something he has wanted for a long time. Heaven is in a good position at the moment because all of the Angels are united in the search for Lucifer’s love child. It might be fear that brings them together but at least they aren’t at War any more which is somewhat positive. Castiel had been written off by Heaven because of everything he has done but he is offered forgiveness if he helps his fellow Angels deal with the threat that Lucifer’s child represents. It’s easy to see how that would be a tempting offer for him because Castiel has been struggling with the loss he has experienced over the years. He isn’t anywhere near as powerful as he was and has taken the lives of so many other Angels. A redemptive arc had to come at some point and this definitely feels like the right time. How this will develop is anyone’s guess but I could see difficult choices coming for him very soon.

A solid episode with a fairly by the numbers case of the week but lots of interesting things going on in the background. The development of the Men of Letters plot by having Dean decide to trust Sam’s judgement and try the partnership out for a while is a good consequence of this case and shows real maturity in Dean. There were other good things about the case such as Gwen having more depth than required and a simple team-up with Crowley without any hidden agendas and complete with him doing an impression of Dean to mock him.

The reveal that Lucifer’s vessel is actually the prison that he’s stuck in and that he is Crowley’s slave is a really satisfying twist. There’s lots of potential to this dynamic and I look forward to seeing more. Castiel’s possibility of returning to Heaven and being offered forgiveness for everything he has done is also really interesting as is having the Angels united by fear of Lucifer’s love child. There’s a lot to build on and this episode moves things along really well. 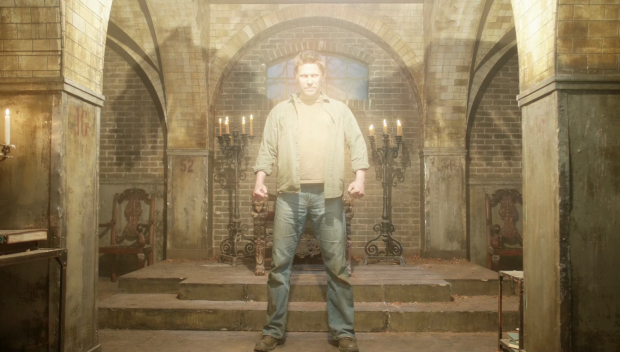 Lucifer gets his groove back…or does he?