Supernatural brings Jack back into the fold and returns to the universe hopping plot before going into its winter hiatus.

Jack’s return was inevitably going to be around the time of the winter break. He’s a necessary part of the overall plot of the season and required to move things forward. More than that he’s a character who has plenty of nuance so anytime he’s around is going to be interesting. 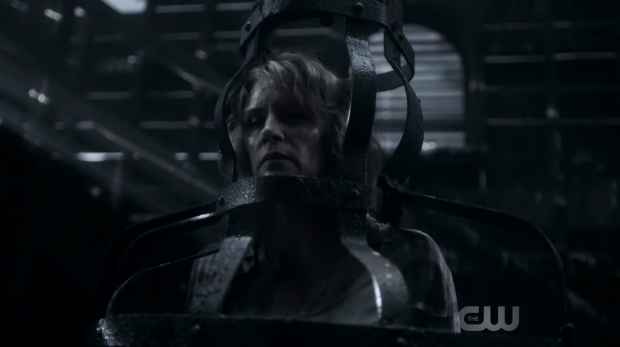 When we first see him in this episode he is in the middle of a mission and has clearly been practicing his abilities. Before he departed he was still getting used to his abilities and really stuck on the question of whether he’s a good person or not. It’s something that he would routinely agonise over and the fact that Dean assumed that the son of Satan couldn’t be redeemed was the source of a lot of that uncertainty.

In some ways some time away from the Winchesters has done him good as he is far more confident and self assured. He knows how to use his abilities to a far greater extent and no longer fears using them. On one hand it’s good to see progression for Jack even though it was always going to get to this point where he becomes more sure of himself but on the other it would have been better to see him become that rather than have it happen off screen.

Jack’s first stop is Derek Swan (Nathaniel Arcand); a Dream Walker who has the ability to perceive alternate realities. He requires the use of that particular ability as something prevents him from seeing these realities with any degree of clarity. Derek’s abilities combined with his own allow him to do that which gives Jack the next clue he needs. 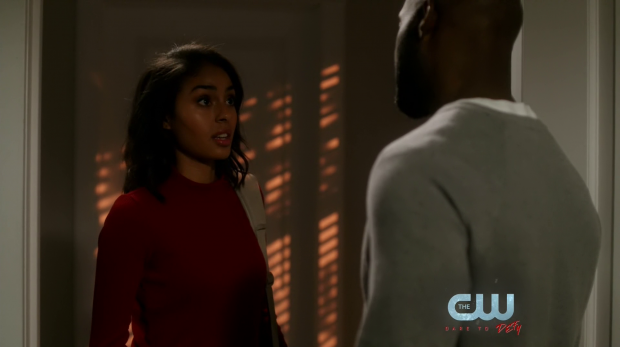 Patience goes her own way

The episode frames this scene as if Jack is to be feared. We see him almost blackmailing Derek into helping him before apparently killing him by forcing his dream walking ability to intensify. We don’t see what happens in-between right away as a chunk of it is left out to allow the viewer to leap to the conclusion that Jack’s morality is compromised to the point where he doesn’t care who he hurts in service of his goals.

This is effectively the perspective of Sam and Dean as they only see the burned out husk that was once Derek which is the source of a debate between them. Dean doesn’t want to believe that Jack is capable of this but also feels that the evidence points in that direction where Sam wants to gather more information before making up his mind. He’s more concerned with understanding dream walking and figuring out why Jack is so interested in it rather than jumping to the conclusion that Jack is automatically dangerous and has to be destroyed. It’s a familiar debate but allows both sides of it to be argued in a way that matches the story. The fact that Dean admits to liking Jack and clearly doesn’t want to believe that he is casually killing people shows a lot of progress in the way he sees him.

Once they find Jack the record is set straight and it’s revealed that he didn’t kill Derek. Letting the audience find this out at the same time Sam and Dean do was a good move as it certainly forced me to question my preconceptions about Jack especially since the last thing we saw him do was accidentally kill someone. His potential to be good or evil has been evident since his introduction so I’ll confess it was a little too easy for me to believe Jack was capable of it. 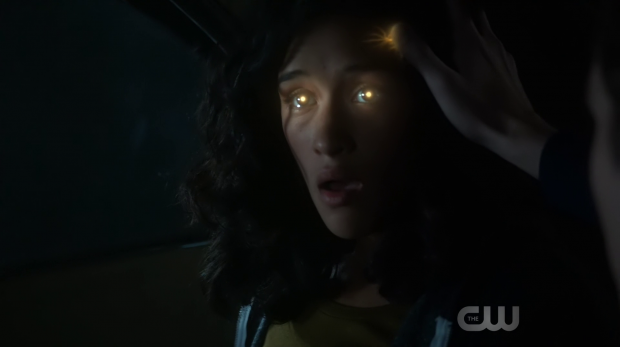 Kaia is opened up to a world of possibilites

After clearing up the misunderstanding -that I’m glad wasn’t lingered on- Jack explains that his plan involves using a Dream Walker to enhance his own powers and cross over into another reality to find Mary. He shares the vision of her trapped in a cage with Sam and Dean which changes Dean’s mindset completely. He goes from angrily mourning her loss to having hope that he will see her again and the transition is jarring for him. Seeing that his mother is alive is the last thing he expected and knowing this makes him determined to do what he can to save her.

Unfortunately this sense of urgency leads Dean to behave very out of character. Pulling a gun on Kaia (Yadira Guevara-Prip) and effectively kidnapping her is a step too far even for Dean. I get that the intent is to show how desperate he is to save Mary before it’s too late but I don’t believe that he would abandon his own morality so casually. At least he apologises later.

The character of Kaia works well in this episode. She gives off a damaged youth vibe that exists because of her Dream Walking ability. Introducing her at a self help group clearly tortured by something is a compelling start and the character only gets more interesting from there. Having her injured by her contact with other realities sets up the personal cost to her for using her powers and raises all sorts of ethical questions about whether it’s right to use her abilities. 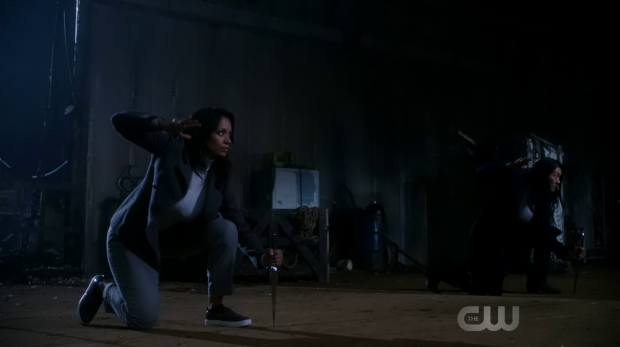 The Angels strike back

Outside of that she’s just a really interesting character who can hold her own against the Winchesters in a battle of wits. This episode is the beginning of a backdoor pilot for the potential upcoming Supernatural spinoff Wayward Sisters with the next episode reportedly properly workshopping that concept and Kaia will be one of the main characters in this potential new show. So far it looks like she’ll make for a great addition.

Her scenes with Jack were really well done in particular as they show the beginning of Kaia’s journey while exploring how far Jack has come. He gives Kaia a taste of the good that her abilities can bring to other people and adds some semblance of hope to what she once thought was hopeless. Jack has gone from doubting his morality to fully trusting the fact that he’s a good person as long as he continues to help others and use his abilities for positive ends. It’s inspiring to Kaia and will likely inform the beginning of her character arc though hopefully she won’t lose her attitude.

The ground work for Wayward Sisters is also laid down with the re-emergence of Patience who was last seen in “Patience“. Her reason for appearing in this episode is somewhat flimsy as it feels disconnected from the main plot other than Dean asking for her help because a psychic might be useful in locating Jack.

She is shown to be conflicted between using her powers and trying to be normal which fits right in with the idea of a teenager struggling to feel comfortable within her own skin. Patience is clearly predisposed to help others and springs into action when she has a vision of Jody being killed. The scenes between Patience and her father are really strong as it feels like they have a very real relationship. 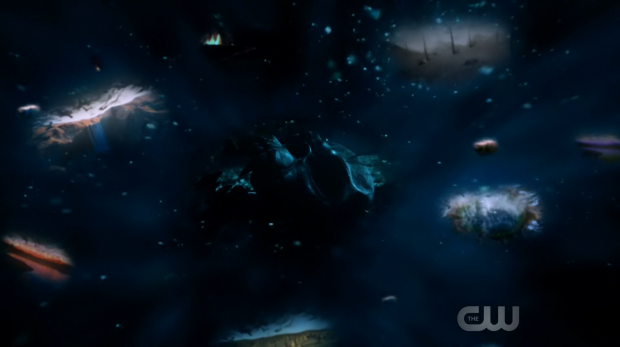 At the most basic level James doesn’t want to see her daughter harmed by a supernatural threat and thinks the only way to make that happen is for her to be forced into a normal life but Patience can’t ignore her vision and let Jody die so makes the decision to help her. This results in an ultimatum from James that could mean never coming home again which Patience accepts because she thinks saving a life is more important. It’s all really good stuff but it does feel like set up for something else rather than an organic part of the story.

The ending of this episode was brilliantly done. On a purely visual level the arena of the final conflict was very memorable and the slow building tension caused by the group of Angels slowly chipping away at the warding placed by Sam was excellent. The situation definitely felt hopeless and it all built to an exciting crescendo. Jack stepping in and using his powers in a last ditch attempt to move realities to escape was a nice touch along with his Angel Nuke power that he used.

As the episode ends Jack finds himself with Mary which marks some form of victory but Sam and Dean find themselves somewhere far more dangerous as evidenced by the giant footprint they find themselves in. Where they are I have no idea but the prospect excites me. It’s a cliffhanger that has me eagerly anticipating the show’s January return. 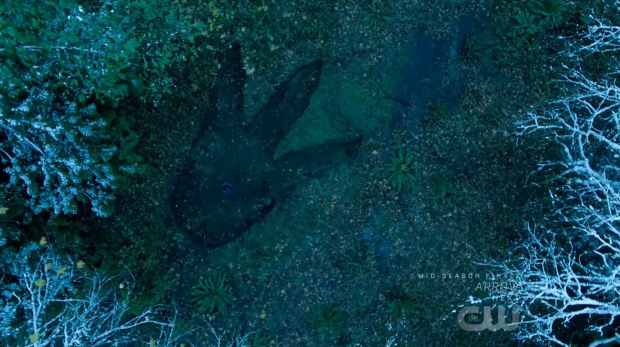 An excellent episode that picks up the main plot threat nicely and has some great progression for Jack while setting up the spin off. Keeping the end result of Jack’s visit to Derek from the audience until Sam and Dean find out the truth was an interesting test of the viewer’s belief in Jack’s morality. It was surprising to find out that he wasn’t responsible and even more surprising to learn how far he’s come in such a short time. It would have been better to see that play out but the progression is well played. Dean’s reluctance to accept that Jack could be a killer is another sign of progression in their relationship. Learning that Mary is alive is an important turning point for Dean who is fille with hope though it results in a bizarrely out of character moment for him.

The episode spends some time setting up the upcoming potential spinoff Wayward Sisters. Kaia’s introduction feels organic as part of the story but Patience’s role in the episode doesn’t quite fit. Both characters were used well but Patience’s story was completely disconnected from the main plot. The ending of the episode was excellent with a visually interesting arena and a tense climactic sequence resulting in a great cliffhanger ending.