Closure and catharsis are the name of the game when Supernatural forces everyone to deal with their grief.

Grief has defined this season so far in one way or another. Dean is mourning the loss of Castiel, Mary and even Crowley while Jack mourns the mother he never knew. The one person not consumed by their loss is Sam though that definitely means that he’s in denial because this is a TV show and that’s just how these things work. 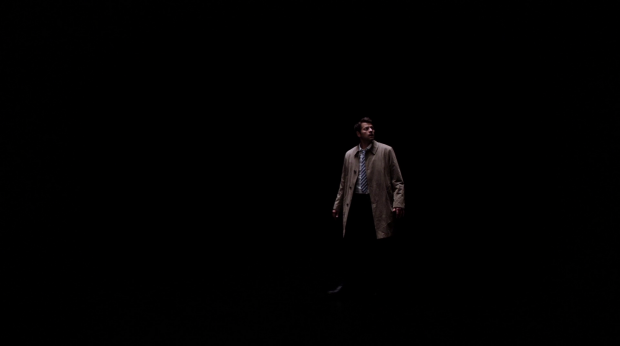 This episode gives everyone an opportunity to explore their feelings and attempt to get some closure on them. It’s not the end of the journey but it’s an important first step that plays to the established strengths of those involved.

The mechanism for dealing with these feelings works really well. Sam, Dean and Jack investigate what appears to be a relatively mundane case by their standards which turns into an introspective experience for each of them in some way. It’s the usual Supernatural setup; a series of suspicious killings in a relatively remote place with evidence that could point to a myriad of different things.

In this case it turns out to be a Shapeshifter which is an old favourite monster of mine from this show. I’ve probably explained why in prior reviews but I’ll explain again. They appeal to me because when they become someone they do so in more than physical experience. In previous episodes it has allowed a character to admit a truth that they were hiding from themselves by having it said by a dark mirror reflection of themselves. There have been other uses which gives them variety as an antagonist but I also like the true horror of being confronted by everything that you deny yourself. 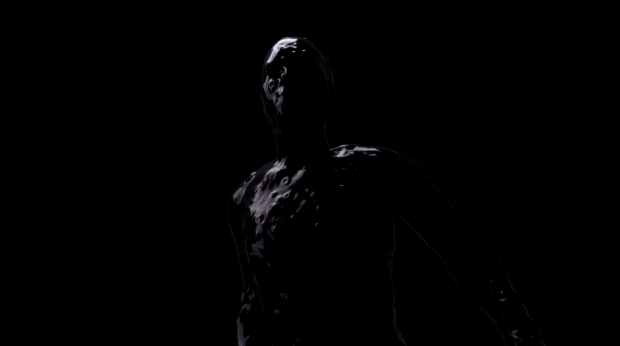 This episode gives us two Shapeshifters for the price of one which allows two different ways of exploring the same idea. Having two also allows for a red herring and we all know how Supernatural loves a red herring. At first all signs point to therapist Mia Vallens (Rukiya Bernard) using her position and her ability to kill her patients by becoming their dead loved ones. This revelation comes too early in the episode for that to be the truth so there’s definitely more to it than that. It turns out that there’s another Shapeshifter named Buddy (Niall Matter) who does that.

Mia is an interesting character and numbers among the numerous examples of friendly monsters that have been encountered over the years. All she wants to do is help people and her ability has granted her a unique way to do that. She becomes whoever her patients have lost and gives them the opportunity to achieve closure on that relationship by letting them say goodbye. It isn’t questioned because people appreciate the opportunity and find a way to rationalise it. Mia preaches catharsis and can actually deliver it to people which is nicely contrasted by the horror element of Buddy torturing his victims by having the last thing they see be their loved ones killing them. This episode isn’t terribly interested in exploring the implications of that contrast which is a shame as it could have made for a fascinating episode by itself.

Naturally Mia is able to dig into all of the denial experienced by Sam, Dean and Jack. Without changing herself she is able to get Sam to open up about how he really feels after the loss of their mother. The emotion that manifests is anger with a fair amount of resentment thrown in. Sam resents the relationship Mary had with Dean as well as never having the chance to forge a relationship with her in the same way Dean did. His outburst shows how he has been bottling it up thanks to Jared Padalecki’s wonderful acting. Jensen Ackles accomplishes so much with his facial expression as a response to it. There’s nothing Dean can say to fix the situation so he knows there’s no point in trying. It speaks to the closeness of the brothers but also how they have drifted apart after the recent losses. 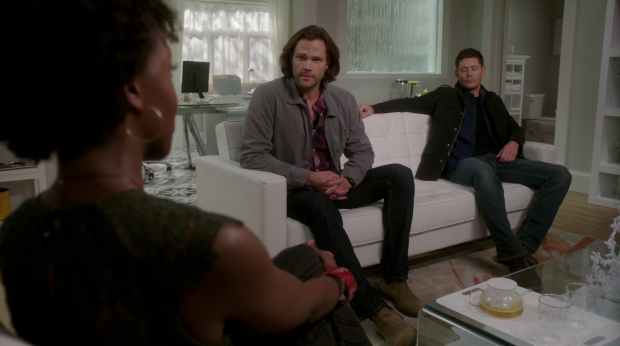 Talking through the issues

Dean’s grief has less focus but it has had plenty of attention before this so it makes sense. His journey in this episode is around his relationship with Jack. Dean still doesn’t trust him nor does he want to be around him but is resigned to the fact that he is stuck with him so attempts to make the best of it. He makes him do menial tasks like fetching food and digging up graves which irritates Sam as Dean is treating him like an intern. Of course Dean insists that he won’t be a parent to the son of Lucifer and will only go so far towards accepting him.

By the end of the episode this changes somewhat when he appeals to Jack’s better nature to get them out of the situation they are in. Dean even compliments him and seems to accept him a little more though time will tell if Jack has to do more to prove himself.

Sam being in danger brings out Jack’s powers which is the first time he’s aware of that he uses them for good. This adds to his ongoing arc of having the ability to choose what he becomes rather than being destined for evil. It’s a very definitive way of saying that this season is more about the shades of grey than the “right and wrong” at least as far as Jack is concerned.

This is a big part of the closure Jack achieves. Mia helps him by becoming his mother. Mia -as Kelly- lets Jack say what he needs  to say which comes in the form of an apology for being the cause of her death. He had no control over it but still feels guilty because his life began with the end of someone else’s. Naturally he’s concerned that he doesn’t really feel bad about hurting people which convinces him that he is destined for evil but Mia -as Kelly- tells him that actions are more important and he is able to choose. The words mean something coming from her as Mia is a monster by this show’s standards but that doesn’t make her evil. She made a choice to use her ability to help people which makes her a positive force in the world. If she can do it then Jack can definitely do it. It’s something that clearly resonates with him as physical examples are really powerful. 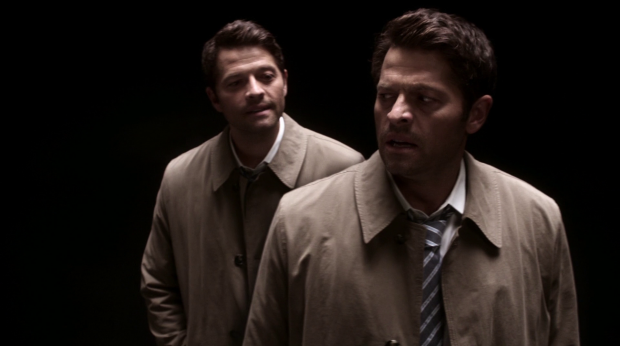 Alexander Calvert is excellent in this scene. He plays Jack’s vulnerability beautifully and has a great rapport with Courtney Ford. The complex emotions being felt by Jack are wonderfully performed and Alexander Calvert continues to create an endearing presence in his portrayal.

Castiel returns in this episode in a big way. His appearance expands the mythology of this show even further by revealing what happens to Angels and Demons when they die. It’s explained as there being emptiness before the universe was created. Angels and Demons are sent into emptiness when they “die” and sleep there for the rest of eternity. It isn’t explicitly stated but it ties into the scientific idea that nothing is ever destroyed; merely changed in some way. This certainly seems to be true for Angels and Demons.

Cas finds himself wandering the emptiness until a self identifying “Cosmic Being” takes his form and confront him. Apparently Cas is the first to ever wake up and that’s something the entity can’t understand or deal with so it spends the episode trying to shame Cas into submitting to eternal rest once again. He does so by forcing him to relive his bad decisions but this only strengthens Cas’ resolve. It reminds Cas of everything he has done and everything he is capable of doing so he promises to keep the entity awake until they are both driven insane. This grants him freedom and we have Cas on Earth again which is definitely a good thing.

The implications of introducing emptiness are mind boggling. It looks great in a TV budget sort of way because it is so minimalistic. The visualisation is complete darkness with a well polished black floor which definitely gets the point across as it fits with many people’s perception of what complete emptiness might be like. I do think that Cas is freed from this plane of existence a little too quickly as spending more time there exploring Cas trying to keep up his resolve as time continues to pass could have been really interesting. He has an entity who takes his form to play off which could have been expanded to it taking the form of anyone he has ever come into contact with including those he cared about and lost. The potential was there so it’s a shame that he returns to Earth so soon. Of course the cosmic being could easily be a recurring nuisance for him but there was plenty of potential here. We may very well see that explored when one of the brothers inevitably gets stuck there at the end of the season. 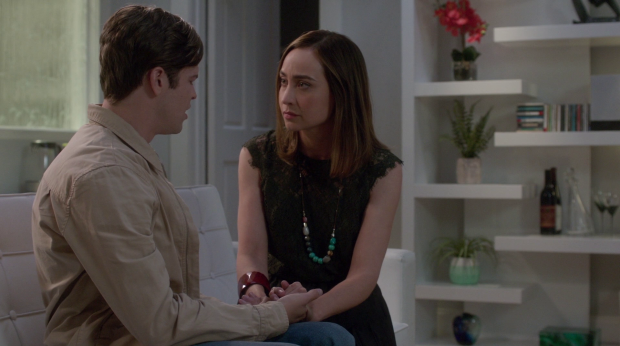 An excellent episode that organically develops the grief felt by all of the characters and offers some closure on the idea. Using a Shapeshifter as a grief counsellor who becomes dead loved ones to allow those left behind to say goodbye is an inspired idea and is used to great effect here when it comes to Jack gaining closure on his mother. He also gets reassurance that he isn’t destined to be evil by being confronted by an example of a monster who has chosen another path. Sam’s catharsis involves admitting that he’s angry and resentful about losing the relationship he never got to explore with his mother where Dean has no words of encouragement to offer. Dean manages to accept Jack to some degree in this episode by admitting he was useful.

The evil Shapeshifter was barely featured and a bit of a let down because of the limited screen time. There was a lot of potential in having Mia’s counselling method perverted into torment as Buddy makes sure the last thing his victim sees is the face of their loved one killing them. Castiel being stuck in emptiness expands the mythology of the show nicely and the way his resolve strengthens when threatening the Cosmic being works really well but there was definitely mote potential to explore the concept of emptiness and how Castiel deals with it so it’s unfortunate that it ends so soon. At least Cas is back and that’s definitely a good thing.