Supernatural goes Wild West on a case that welcomes Castiel back into the fold and lets Dean celebrate the win that he wanted so badly last week.

So far this season has been consumed by loss. Dean has been struggling to deal with losing his mother all over again at the same time he lost Castiel. Even the death of Crowley is difficult for him to deal with. This has all been well executed because the acting has been strong and other things going on have prevented the show from being consumed by angst. All the same it’s good to lighten the mood a bit and actually have some fun. 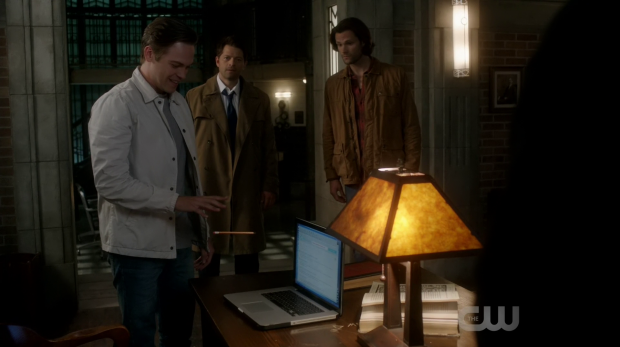 The previous episode ended with Castiel reuniting with the Winchesters and this episode picks up right where it left off to show us the reaction. At first there’s confusion followed by a quick explanation and then Dean being unbelievably overjoyed. Sam questions it to a degree but accepts Dean answer of a win being needed. There’s probably some form of denial at play as their troubles are far from over but it’s easy to understand why Sam would be content to let Dean bask in being happy for a change.

Adding to Dean’s glee is a case that involves them going to Dodge City, Kansas and being Cowboys for a while. Dean gets to wear a cowboy hat, pose as a Texas Ranger and generally bask in the glory that surrounds their current location. Jensen Ackles has always had excellent comic timing and it’s good to see him stretch his comedic muscles here. Many of the lines he delivered are along the lines of a giddy child on Christmas morning which definitely makes for a refreshing change from his dour mood this season so far. Again, it hasn’t been badly handled but we are at the right point in the season to have a break from it.

Dean is even excited about the monster they have to fight. The antagonist in question is a Ghoul that has taken the form of notorious gunslinger Dave Mather (Jonathan Cherry). Despite how horrible it is that people are turning up dead Dean relishes the thought of going up against something that looks like someone he greatly admires. It is also addressed that they have recently dealt with a creature that can change its appearance. Referencing the repetition doesn’t make it better but it adds to the overall self awareness that this show is so good at. 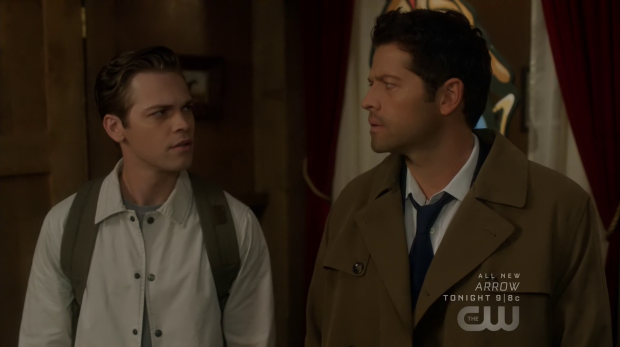 The Ghoul isn’t especially interesting or well developed though the fact that he seems to care about coroner Athena Lopez (Sarah Troyer) brings some intrigue. Athena is initially introduced to briefly cast suspicion on her as the Ghoul since it makes so much sense for it to be her given her access to dead bodies. The red herring doesn’t last long as it becomes clear very quickly that Dave Mather is actually the culprit thanks to some handy exposition from Dean.

Athena is a fairly interesting character and has more depth than the average one shot Supernatural character. She’s very out of place in the morgue according to Sam and Dean but it turns out that she’s only doing the job to raise money to attend the school that she wants. It’s a means to an end for her which feeds into her relationship with Dave in pretty small ways. She mainly exists for the purposes of the red herring but Sarah Troyer manages to make her memorable despite that.

Dave is fairly bland yet serviceable as antagonists go. There’s enough presence there to appear as a threat though he’s not especially threatening compared to what we have seen before. The real hook is that he seems to have developed feelings for Athena and is willing to commit crimes in order to further her dreams. Exploring whether his feelings are genuine or self serving might have been interesting though the episode doesn’t do that.

The meat of the episode comes from Jack’s contribution. His first in person meeting with Castiel is nicely done with Alexander Calvert and Misha Collins’ performances being impressively in sync. There’s a familiarity between them that should exist considering Castiel’s role as his protector last season. Linking them through Jack being responsible for him waking up in the Empty is a nice touch as well. 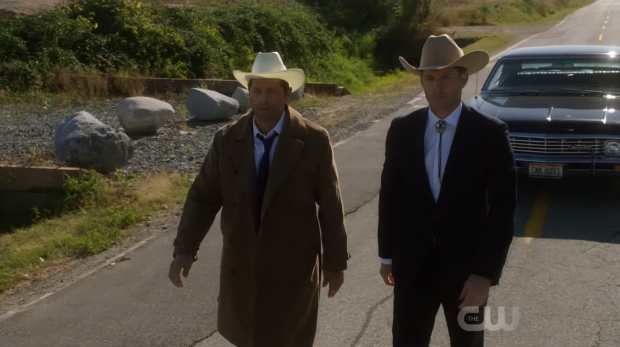 Jack is throwing himself into the life of being a hunter by finding a case, committing to the disguise aspect and throwing himself into the research. He has clearly been paying attention as he slots into so easily. Having him included creates a natural opportunity to split into groups as well. It makes sense that Jack would go with Sam as he identifies more with Sam who has shown him greater compassion. Dean and Castiel make sense as a team in this episode for obvious reasons.

Castiel’s return results in a boost in confidence for Jack who is getting better at using his abilities as shown by him casually levitating a pencil. Unfortunately this confidence comes with a lack of control which results in the accidental death of someone innocent. Nobody blames him because they all have blood on their hands so aren’t in a position to judge. It’s a definite shift in how Dean sees Jack and shows that he has been accepted by both Sam and Dean but it’s small comfort to Jack who blames himself. He wonders if the man he killed has a family and struggles to deal with what he has done. This causes him to leave and presumably become vulnerable to the various parties interested in him. Alexander Calvert’s performance in these scenes is great. The horror, guilt and remorse can be clearly seen as well as the fear that he is actually evil.

It’s a shame that Jack had to leave so soon as I would have liked to see at least another episode of him working with Sam, Dean and Castiel before having him accidentally cause the death of an innocent. It feels like he transitions too quickly from confidence in his abilities to accidentally misusing them. Maybe this will lead to something even better though the plotting does feel very rushed. 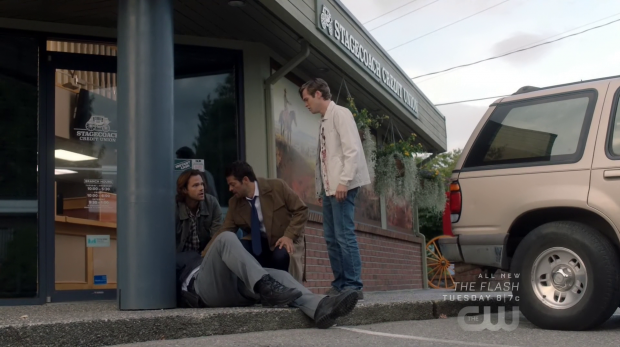 A fun if unremarkable episode that lightens the tone and lets Jensen Ackles stretch his comedic muscles. The cowboy trimmings on the episode are a lot of fun and seeing Dean lighten up to celebrate the return of Castiel was a nice touch. The villain was fairly underwhelming though tied into Dean’s love of cowboys. It would have been interesting to explore the character based reason for the Ghoul to behave the way he did but the episode wasn’t overly concerned by that.

Jack’s first official meeting with Castiel was handled well and the two actors have a degree of familiarity to their performances which makes sense given Cas’ role as Jack’s protector prior to his birth. I liked seeing Jack throw himself into Hunting and showing how far he’s come just by observing Sam and Dean. The growing confidence in using his powers as a result of Castiel’s return was nicely done as well though escalates a little too quickly to the death of an innocent followed by him leaving. Sam and Dean not blaming him shows an awareness of the fact that they are far from innocent as well as Dean’s acceptance of him. This was all good stuff though at least another episode of Jack working with Sam, Dean and Cas might have been better.