“War of the Worlds”

Supernatural moves more pieces around and starts to ramp up the tension between the various factions on the lookout for Jack.

Jack’s disappearance last week is something of a curveball for Sam, Dean and Castiel who are working to deal with the fallout of this. Finding Jack is top priority but there’s absolutely nothing to go on to start their search. This hopelessness leads them to kill time by working a case. It’s the standard go-to whenever Sam and Dean are at a loss dealing with the big picture and it leads to something bigger than was expected as it so often does. 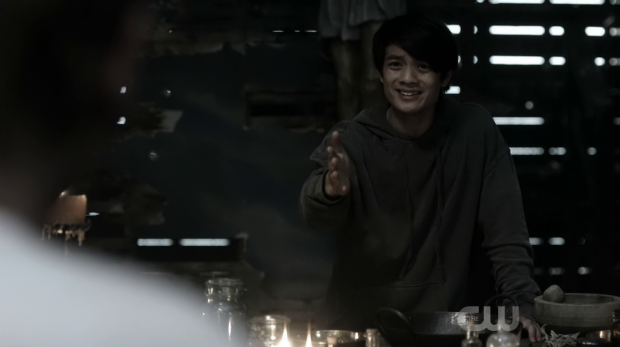 The case involves a series of ritualistic looking murders that point to Witchcraft which means that Witches are the most likely suspects. As per recent story structure the episode largely skips the routine investigation portion of the plot and goes right for the meat of the story.

It turns out that the murders are actually Witches being hunted by someone looking for Rowena. Sam and Dean are approached by a terrified and desperate Witch named Daniela (Farrah Aviva) who immediately expresses her distrust of the Winchesters while also acknowledging that she has no choice but to ask for help if she wants to continue living. I like that Sam and Dean’s reputations often precede them and a lot of supernaturally inclined beings actively look to avoid them lest they suffer the grizzly alternative.

The murderer turns out to be a familiar face in the form of the presumed dead Arthur Ketch who was supposedly killed by Mary last season. At first Ketch pretends to be his less favoured brother Alexander Ketch who wasn’t the success story of the family and uses his skills to remain hidden from the notice of the Men of Letters.

Twin brothers are about as contrived as it can get when aiming for a shock reveal. A previously unknown identical twin is often an excuse to reuse an actor that fans responded well to but was written out of the show for whatever reason. The idea of Ketch having an identical twin brother ventures dangerously close to melodramatic soap opera territory. 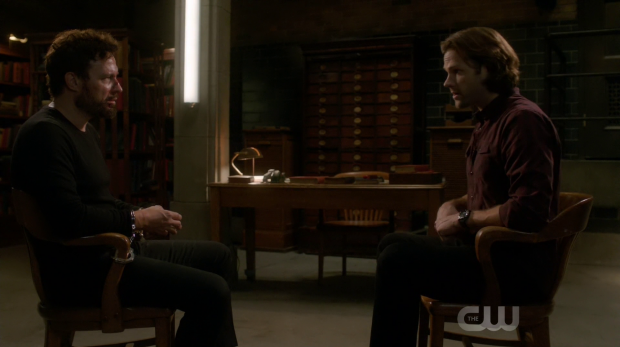 Luckily it’s all an elaborate hoax on the part of Arthur Ketch who took steps to be able to hide away should the need arise. David Haydn Jones’ performance as “Alexander” is noticeably different from the Arthur Ketch persona to the point that it’s almost convincing enough. The seed of doubt was always in my mind as it was for Dean. Sam being willing to believe it eventually was expected as it lets Sam and Dean embody the two sides of the argument but he should also be smarter than that by now.

The episode does a good job of dropping clues to the reveal without being overt about them. Dwelling on the mention of Mary and asking how she is while having a concerned expression on his face is very subtle yet telling. Dean’s line of questioning also hints that this is the point he became convinced that Alexander Ketch was a fiction.

Another reason the deception almost works is because the idea of an alternate version of Ketch joining Sam and Dean as a Hunter has a certain appeal to it. David Haydn Jones proved last season that he’s a fine addition to the cast and has great chemistry with Jensen Ackles in particular so having him play a different character who allies himself with the Winchesters would likely have created good stories.

His cover story sort of works as well. The fact that he has taken it upon himself to be a Hunter explains why he is systematically taking out Witches. With it being a series of murders it does seem oddly specific and the Daniela’s reference to him asking for Rowena adds a layer of unexplained intrigue that pokes holes in the story but it’s more or less believable to a point. 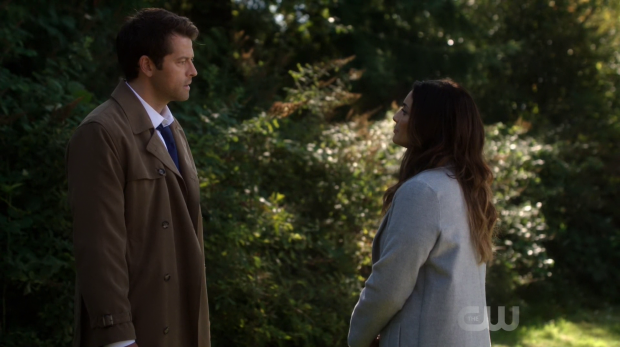 The reveal that he used Rowena’s trick to evade death makes sense given how knowledgable and resourceful Ketch was last season and being determined to find her to recharge it works from the point of view of fixing a vulnerability as quickly as possible. Ketch remains as shrewd and pragmatic as ever which is good because it’s consistent with one of the things I liked most about the character. This pragmatism comes into play at the end of the episode with the reveal that he is working with Asmodeus; it clearly fits his best interests for now so it makes sense for him to offer his help.

Asmodeus still isn’t up to much as a villain but I don’t think he’s supposed to be. This season is setting up that there are different factions all interested in Jack and he only represents one of them. As such he has to be enough of an obstacle to justify his presence but not enough to steal the limelight. Lucifer even describes him as the “runt of the litter” further reinforcing that he’s not something worth worrying about in the long term.

This episode has Lucifer return from the alternate universe thanks to a spell cooked up by alternate Kevin that opens a gateway for one journey only. It’s very fortunate that only Lucifer could go through because the alternate Michael is keen on doing the same to the main reality that he did to his own. Lucifer is scared of this version of Michael and knows that he is inferior even at full strength so that alone establishes the threat value that the alternate Michael represents. He has been tabled for now since alternate Kevin needs to find a way to reopen the gateway but it’s clear that Michael will soon be crossing over. 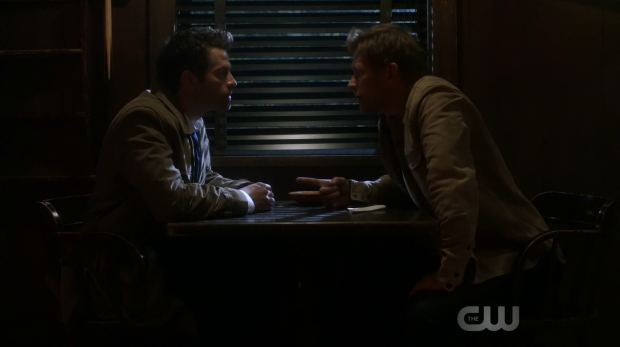 Adding to this problem is that the trip between realities was enough to sap Lucifer’s strength. He still has some of it but it’s unclear whether he has been permanently neutered of needs to recharge. Either way he’s useless for the moment and asks Castiel for help in preparing for this new threat.

The scenes between Cas and Lucifer are very enjoyable to watch. Mark Pellegrino is his usual off the wall humourous self and Misha Collins bounces off him wonderfully. Their dialogue is loaded with plot but also feels like brothers bickering which hides the exposition somewhat. Despite the fact this is yet another example of Lucifer being depowered to extend his lifespan on this show I’m eager to see what happens next. For now Asmodeus has the upper hand but I suspect that will soon shift.

Castiel also touches base with the Angel faction in his conversation with Duma (Erica Cerra). Naturally they are looking for Jack but their motivation involves self preservation. They need Jack’s power to create new Angels because their numbers have been massively depleted of late and there is a genuine risk of extinction. I like this angle even if it isn’t something the episode chooses to dwell on for any length of time. It’s an idea left lingering to be picked up later and adds a sense of urgency to any action sequence resulting in the death of an Angel. Each death is significant to them because it makes them one step closer to extinction.

One thing that doesn’t quite work is the alternate universe. It still isn’t that interesting to look at which makes it less than interesting to spend any time there. As good as Christian Keyes is as Michael there’s no reason to believe his bluster other than what has been said about him. He’s a fairly one dimensional villain so far and Lucifer’s terror is really the only thing giving the threat he represents any real urgency. The lack of Mary in these scenes is also noticeable though I suspect this will be picked up the next time we see the alternate universe. 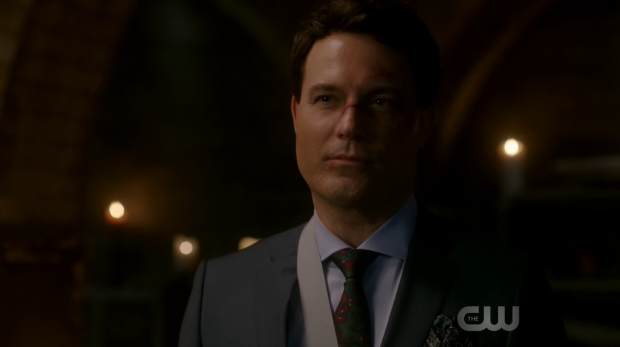 The Ketch is back

Another strong episode that moves the plot forward in really interesting ways. The return of Arthur Ketch and his attempt to convince Sam and Dean that he is actually his twin brother Alexander works really well. David Haydn Jones delivers an almost convincing performance as a different person and the clues that it is all a deception are nicely subtle before revealing the truth. Sam and Dean being on opposite sides of the belief makes sense in terms of representing both sides but Sam being inclined to believe Ketch makes him look like an idiot.

Lucifer’s return from the alternate universe allows for great interactions between him and Cas. Their dialogue is designed to drop a lot of plot but it’s nicely masked by their brotherly bickering. Lucifer having his powers neutered has long since become a trope on this show but it does allow the otherwise meagre threat presented by Asmodeus to appear more significant. For now he has the upper hand but that likely won’t last long. Similarly Michael doesn’t feel like much of a threat at this point other than being more than a match for the depowered Lucifer. The notion of Angel extinction is addressed here but not covered in depth. It’s an interesting idea and adds a sense of urgency to their future appearances.