Supernatural gives launching a spin-off a second go with a backdoor pilot focused on Jody and a collection of the show’s female characters.

The notion of a Supernatural spin-off has been discussed for years with nothing coming from it for such a long time. An attempt was made back in season 9 with “Bloodlines” and it was a complete disaster so the discussion went quiet for a while. This time the setup uses characters that the audience will be familiar with in an attempt to create interest in more stories set in this universe. 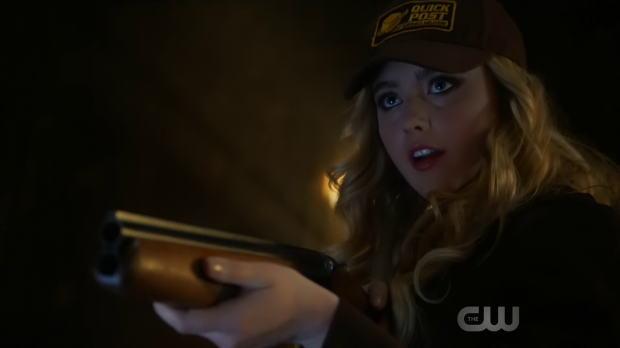 Just a normal day for Claire

In short, it works! The collection of characters already have a natural dynamic and the episode doesn’t feel off on a conceptual level. Thanks to its many years on the air Supernatural has developed a number of engaging recurring characters who can come and go with very little explanation. Jody is very much a mainstay and always enhances and episode she’s in so has earned being more of a focus. It’s also important to note that it’s perfectly natural for Jody to step up when Sam and Dean are in need of rescuing.

Jody is very much the glue that holds the characters together. Kim Rhodes has a natural authoritarian demeanour in this role and clearly commands respect from everyone she meets so is a natural fit as a mother figure for the young girls who all look up to her even if they don’t necessarily agree with her.

The plot of the episode couldn’t be simpler which is great in this case as it focuses on the characters. Everything is focused around finding out what happened to Sam and Dean and bringing them back from the dangerous alternate universe they found themselves in at the end of the previous episode. All of the characters contribute to that in some way while growing and developing as they go. 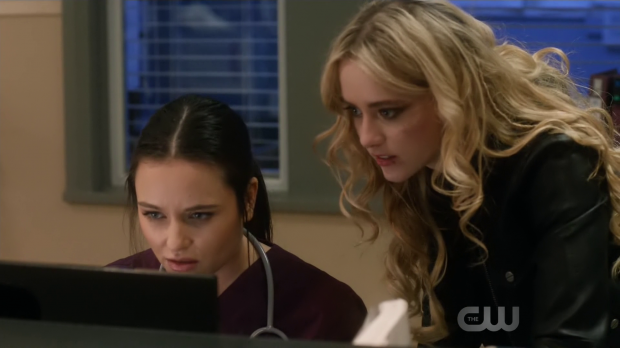 The value of research

Claire Novak is the most prominent character for this episode which makes sense since her last appearance ended with her heading off on her own to become a Hunter in her own right at least for a while so in order for her to get to the point where she might play better with others that needs to be resolved and this is the perfect episode to do that.

Her introduction here was great. We see her at the end of a routine hunt for a Werewolf where she goes in guns blazing and makes quick work of the Werewolves at considerable risk to herself. This begins her arc of realising that isn’t always a good strategy as it will only work for so long before she ends up dead. Her recklessness manifests in various ways such as her trying to attack a monster before understanding what it is. Experienced viewers will know that could be a fatal mistake.

This is Jody’s main concern and she tries to get Claire to realise this to no avail. Claire sees the careful planning and investigation side of Hunting as a waste of time as it ends up getting innocent people killed. While this is true it also makes the survival of the Hunter more likely so the strategising is necessary if staying alive is the aim. Claire isn’t able to hear that initially because she thinks that she’s invincible after surviving so long on her own. 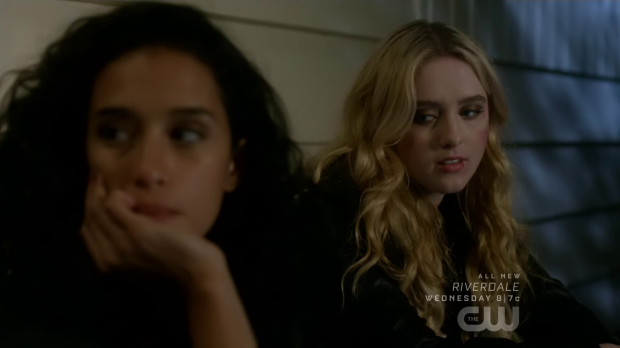 Naturally she needs to learn a lesson that changes her outlook and helps her realise that she can’t be lucky forever. This comes out of her fast friendship with Kaia who clearly reminds her of herself being a scared young woman who had nobody to protect her. They bond over that familiarity as well as some scars to prove that they’re badasses. Their scenes together are engaging and it makes Claire’s reaction to her death believable especially since she took it upon herself to be Kaia’s protector and feels like she failed her new friend.

Her relationship with Jody evolves across the episode as well. Claire seems to want her approval in the beginning and is a little taken aback when Jody isn’t impressed by her hunting methodology. The scene where she arrives back home after being away for so long she becomes the lost little girl in need of support and validation before realising she isn’t going to get it and reactivating her “tough girl” persona. Scenes like this are a testament to how well developed this relationship is.

Kathryn Newton has never been better as Claire in this episode. Her fearless and competent Hunter attitude fits the character well and it’s clear that the compassionate vulnerability hasn’t been lost. We see that in her interactions with Kaia as well as her determination to save Sam and Dean because she feels that it’s her duty to do so. 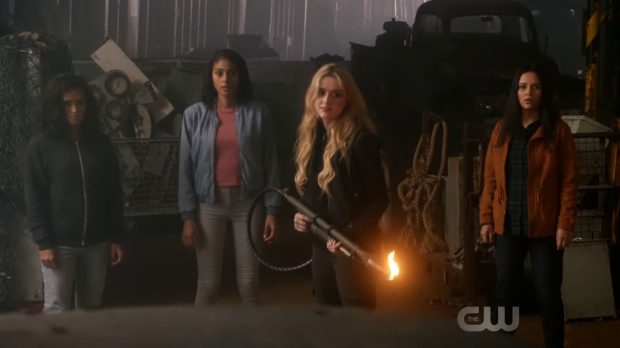 The other girls aren’t featured quite as heavily but they still have an important purpose in the context of the story. Alex uses her role as a nurse to find information on Kaia and generally makes up part of the ensemble. Her interactions with Claire are a lot of fun as they reinforce their sisterly bond thanks to the bickering and casual familiarity. This episode really excels in selling the little moments that tell us so much about the characters particularly when they haven’t been seen together in a while.

Patience is here because of her vision and her desire to stop it coming true. Claire is reluctant to believe that a psychic can be any use though grows to appreciate the validity of her claims when she sees first hand evidence of her ability to predict the future. Ever the competent Hunter she asks if the visions always come true then starts to think about how to prevent it when she finds out that the future can be changed if the right actions are taken.

The pay off to this is tragic as Patience’s visions do end up coming true because time wasn’t taken to think about how best to go about changing the outcome. Claire has the right idea but the execution is all wrong and she needs to learn to overcome that. She takes steps in that direction in this episode but it will be her arc should this be picked up as a series. 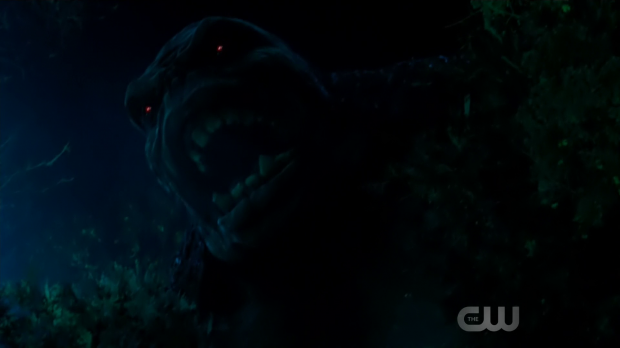 Patience turned her back on her father in the previous episode out of a desire to do the right thing. She has moments of doubt throughout the episode and even considers going back in the hope that her father will take her in once again. Her desire to do this is completely natural as she clearly feels overwhelmed by the entire situation and her first instinct is to run away from it. The conversation she has with Alex is great at showing the contrast between someone new to this life and someone who knows their way around. The casual remark Alex makes about where to bury the body of a monster says it all and the horrified look Patience gives as a response says everything about how strange this must seem to someone not used to it. Patience will clearly take on the role of the newcomer getting her head around everything she’s experience which will definitely represent a large chunk of the audience.

Donna also makes an appearance as part of the group. Jody calls her in to bring some firepower and she blends seamlessly with the group though takes on more of a comedic persona that sometimes feels out of place. It isn’t inconsistent with what we know of Donna prior to this episode but it doesn’t always fit and I’d like to see the humour spread out among the cast.

Kaia’s death was unfortunate as there was a real opportunity to develop the dynamic between her and Claire as well as the rest of the characters. It looks like her alternate universe duplicate will join the cast instead but by definition that won’t be the same even if there are similarities. The staging of her death was slightly clumsy as well so I feel that they have really missed a trick here. 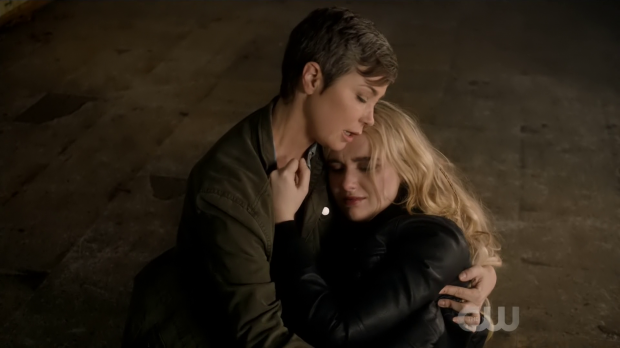 Of course it’s necessary for Claire to realise she doesn’t want to be alone and likes being part of a family. The dinner scene at the end of the episode was really touching and shows the bond these characters already have that can continue to develop. It’s a really strong foundation to build on.

The episode also boasts really good action. An ensemble cast allows for a lot more moving parts that came together really well in this instance. The action was focused on the characters with each of them getting a moment to shine during the set piece and it was just incredibly entertaining to watch with moments of tension as well as triumph.

Sam and Dean are barely featured in this episode but I don’t consider that a flaw since the focus was elsewhere and the quality of the episode was so high. They were returned to periodically to remind the audience of the stakes and that time was running out for them but they weren’t required for much else. The alternate universe looked really good if a little sparse and the King Kong size Demon creature was really cool as well. This wasn’t their story and it certainly didn’t suffer for them barely being in it. 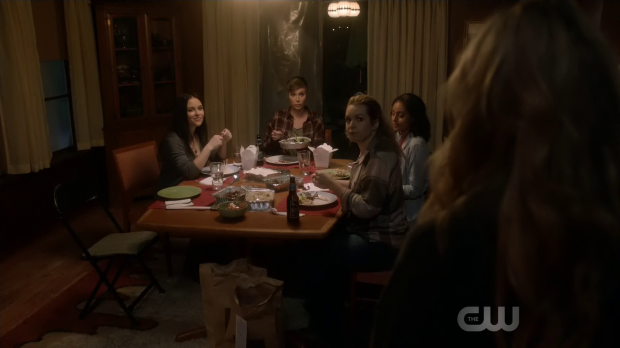 An excellent episode that feels like a natural use of the various characters even though it serves as a back door pilot. Jody acts as the glue holding the girls together and Claire is most prominent as she has to get to the point where she wants to be part of a family once again. Claire is a great character here with her badass attitude still tempered by compassion and vulnerability. Having her Jody’s approval and eventually learn that she needs to be more cautious is a great touch for her and the bond she builds with Kaia over their similarities works really well. Kaia’s death was unfortunate as there was a lot of potential there.

The other girls are featured a bit less but still come through strongly. Patience has a particularly great scene where she almost leaves because the situation is overwhelming to her contrasted with Alex being more at home and treating it like the norm. It’s clear Patience will be for the audience members who don’t know this world as well as the others. Donna is a great addition as well but shoulders too much of the comic relief when it could easily have been passed around. Sam and Dean being barely featured isn’t a flaw as far as this episode goes as everything around it was so strong. The other world looked great and the King Kong sized Demon was a great visual.