Supernatural picks up from last week as Sam takes the fight to the British Men of Letters and Dean tries to de-program his mother.

It looks like this season we get two finales for the price of one. There have been two stories running concurrently this season. Lucifer’s child and the British Men of Letters have had roughly equal time spent on them with very little overlap so we’re at the point where a resolution has to come and this can’t be done in the same episode since they are so disconnected. As always when two episodes are aired at once I am writing about the first without seeing the second so that my opinion isn’t coloured by future knowledge. 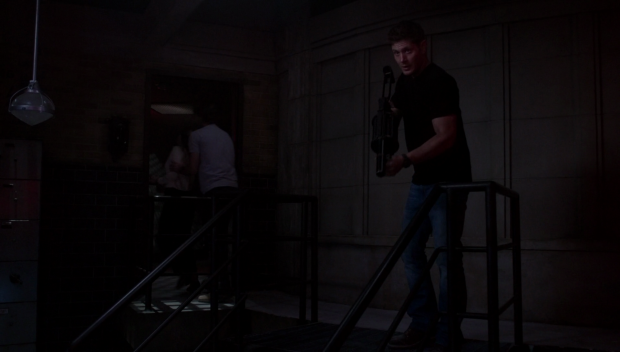 The opening of the episode where Sam, Dean and Toni were trapped in the Bunker was really entertaining and at an earlier point in the season an entire episode could have been created from this idea. Stuck in a life or death situation with someone untrusted often provides great fodder for drama so it might have been interesting to see this play out over an entire episode.

Sadly this isn’t what we get as the episode has a lot of plot to burn through so a few minutes are spent on the escape. This means that Toni has very little chance to be developed. The first attempt to use magic fails so Sam and Dean try to “Shawshank” their way out by hitting a concrete wall with pickaxes. Due to the dwindling oxygen and build quality of the wall this doesn’t work either and the brothers decide to have a bit of a heart to heart. Sam feels responsible for the situation they’re in because he chose to work with the Men of Letters. He liked the idea of American Hunters united in a common goal and was seduced by Mick’s sales pitch.

He sees now that it was a mistake but the sentiment behind it was genuine from his point of view. Dean doesn’t blame him for it as he also went along with it plus placing blame doesn’t really get them anywhere. I like that Sam and Dean are at the point where they have put the time wasting blame game behind them.

Dean’s idea to use the Grenade Launcher to blast his way out was brilliantly handled. It’s such a Dean thing to do and his boyish glee at the thought of finally using it was hilarious. It also gives him a reason to say “Yippee Ki Yay” and the resulting injury organically removes him from Sam’s mission to take the fight to the Men of Letters. I love it when plot and characterisation work in tandem like this. 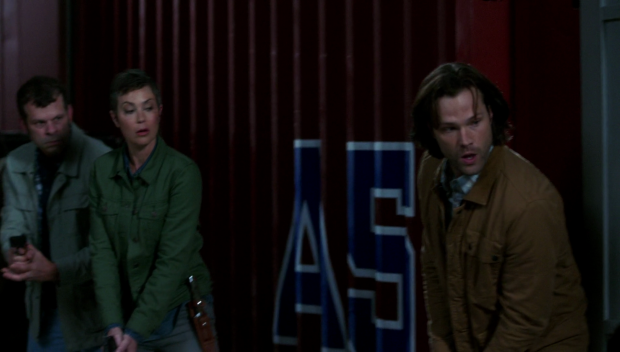 Sam gets to deliver an impassioned speech to a group of Hunters about how he was sucked into what the Men of Letters have to offer and now wants revenge after being betrayed. Sam takes full responsibility for everything he has had a part in and the speech has a sombre tone to it but it is also inspiring in its own way.

The sequence where Sam attacked the Men of Letters base with his team of Hunters was really well done. It was exciting, dynamic and easy to follow though it was fairly obvious which Hunters wouldn’t make it out alive considering it was their first appearance with almost no lines. It’s not really a bad thing but it lessens the tension somewhat when it’s clear that people are only introduced to create jeopardy without sacrificing known characters.

It does feel like a really abrupt way to wrap up the British Men of Letters plot. After a season of development it’s essentially solved by an all out assault on the American base that kills everyone inside. Dr. Hess tries to bargain for her life but Sam doesn’t want to hear it. There’s a vague reference to things he doesn’t know about which may or may not be limited to Lucifer but other than that it’s essentially resolved. The Men of Letters are still out there though as shown by the disembodied voice on the computer screen. I imagine this will come up before the show comes to its inevitable conclusion but for the most part this plot is neatly wrapped up.

Dean’s attempt to de-program his mother is the most interesting thing going on in the episode. He goes into her head to talk her into returning to her old self which feels overplayed on the surface especially for this show but the quality of what was on screen can’t be disputed. Mary’s idealised memory is one where Dean is a young child and Sam is a baby. Dean sees that this is where Mary would rather stick around and he just can’t believe it. He actually says that he hates her and calls her out on every terrible decision she made that led Sam and Dean to where they are not. The trigger is when Mary says to young Dean that she will never let anything bad happen to him which is ridiculous considering all the bad things that have happened to both of them. 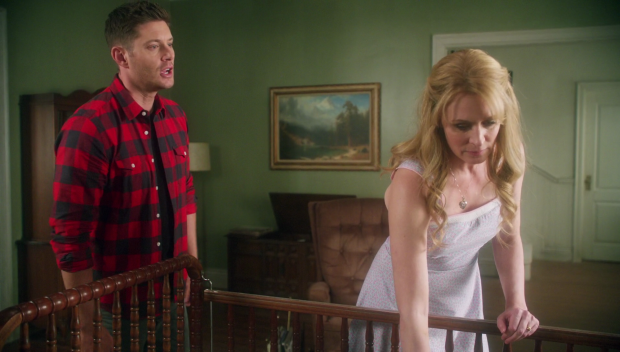 Dean puts it all on the table

Supernatural is always raising the stakes when Dean gets introspective because it’s something he rarely does. He has clearly been thinking about the way his life is for a while and finally talks about it when it looks likely that he’s about to die. For a while he thought that life was going good as they had saved the world, Cas was back and their mother had just been returned to them. Things have gotten significantly worse since then and Dean feels that they have gone from having almost everything to practically nothing. His motivation to continue is dwindling which allows him to be more vulnerable and tell his mother everything he has been bottling up.

He brings up the deal she made with Azazel and talks about how that event basically defined both of them. In particular the terrible things that have happened to Sam are rattled off such as Jess being killed, his possession by Lucifer and losing his soul. Dean properly sees Mary for the first time and definitely doesn’t like what he sees. He blames her for leaving them with John who was “a shell” as a result of her deal with Azazel. In the absence of any parental figures Dean had to step up and be that for Sam because otherwise they would never have made it to where they are now. He really resents Mary for this and it all comes out when she promises that she will never let anything bad happen to him.

This is countered by him admitting that he loves her because he can’t help it. She’s his mother so there’s no option as far as he’s concerned but he can also understand her reasons for making those decisions. Dean has made many of the same choices to protect people he loves and ultimately he is able to forgive her for everything she has done. He wants to start again to be a family again but he needs her to snap out of what Toni did to her. It’s enough to snap her out of it and there’s a sense that things are resolved between them. This scene was really powerful and Jensen Ackles delivers an outstanding performance as Dean pouring his heart out to Mary. 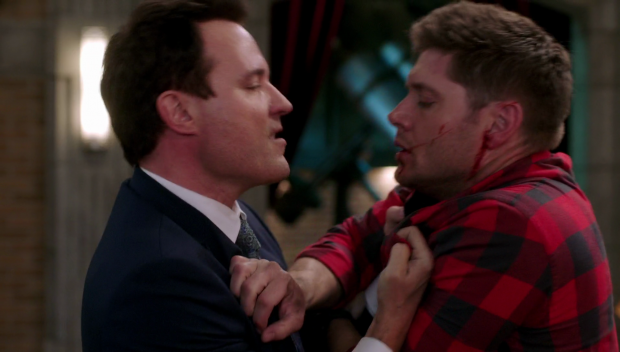 Dean vs. Ketch – the final showdown

The interruption to Dean and Mary’s heart to heart by Ketch was really jarring but effective though Toni suffers a really undignified exit. His partnership with Mary needed to be resolved and putting him up against Dean makes the most sense because the characters are more alike than Dean would care to admit. The beating that Ketch delivers is brutal and he comes across as almost feral. Any semblance of decorum is gone as he lashes out with nothing but anger against Dean who is at a disadvantage because of his injury but still manages to get some licks in. I liked the reminder that Ketch never plays fair when he exploits Dean’s injury and Dean calling Ketch out on leaving them alive is a nice touch as it was a choice that engineered the downfall of the Men of Letters. Mary being the one to kill Ketch was the right dramatic beat considering how much time they have shared over the season.

Mary takes responsibility for being cold and distant and playing a big part in the mess they ended up in. She admits that being around her sons was difficult because she saw the end result of her choices and seems almost ashamed of it. Dean no longer holds this against her because he ultimately likes the person he is. This episode is about getting it all out in the open and the Winchester family become a united whole ready for the finale.

An excellent episode that serves as the first of what will likely amount to two finales. The purpose of this one is to close off the Men of Letters storyline and it accomplishes that with a great degree of success. Everything is grounded on the characters who deal with the problem in different ways. Sam mounts a campaign to destroy them once and for all while Dean focuses on getting Mary back. Sam’s mission is a success and provides some really cool action for the episode though it was obvious who the expendable Hunters were. Dean’s efforts to de-program Mary are the highlight of the episode with complex emotional beats and an amazing performance by Jensen Ackles. Dean’s final fight with Ketch is great as well and Mary being the one to finish him off makes a lot of sense.

It’s a shame that the episode isn’t able to take further advantage of Sam, Dean and Toni being trapped in the Bunker. What we see is entertaining and watchable but it’s mostly mechanical with a little bit of character thrown in. Toni is vastly underserved and her death is really undignified. Killing off characters with very little fanfare has been a problem throughout this season. 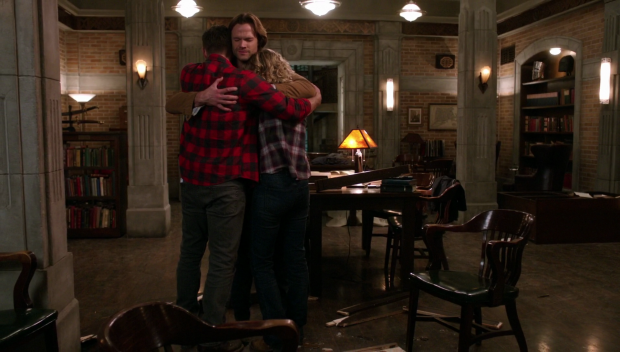