The 100 channels its inner Hunger Games as representatives from all 13 clans battle it out to decide who has control over the bunker.

Battles for survival aren’t unusual for this show as most of the major arcs have amounted to various characters fighting for their lives in one way or another. This particular scenario has the battle for survival taking place on two fronts. The most obvious is the contestants in the Conclave fighting for their lives but the real battle is for the survival of the human race itself. Whoever wins ultimately gets to decide the fate of everyone and that carries a lot of dramatic weight. 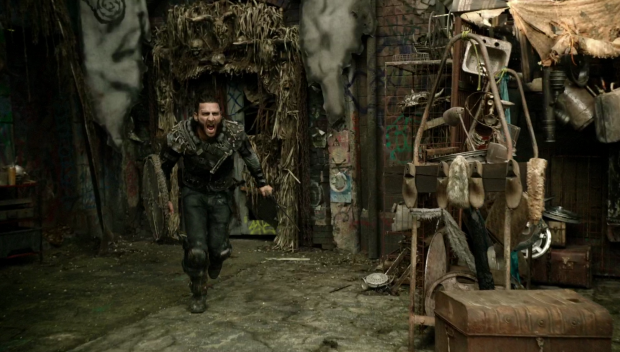 The Conclave starts with 13 representatives mostly made up of unknowns but with a few familiar characters so that we are invested in the action. Octavia fights for Skaikru, Roan represents Ice Nation, Ilian flies the flag for Trishanakru and Luna enters the battle for nobody but herself. Her clan was wiped out so she has nothing left to fight for. Her vow is the most concerning as she resolves to let nobody have the bunker and let the human race die off completely.

Luna’s participation and her vow makes some sense. She goes full nihilist and refuses to listen to any talk of a better way. She has always been a character to turn her back on everything and given what she has witnessed over the past few episodes it’s easy to understand why she might feel that humanity isn’t worth saving. The tipping point for her was probably seeing people being experimented on without their consent before Abby destroyed any progress that was made. I cite this as a possibility as the episode doesn’t really delve into her motivations which makes her participation feel somewhat out of place.

Having her involved in the action was definitely something to behold. She was a force to be reckoned with which is consistent with what we have seen of her in the past. When she was introduced she was shown to be one of the best warriors on the show so it’s definitely believable that it would take two skilled combatants to bring her down.

Octavia and Roan team up against Luna. If any pairing could be enough to bring her down it would be them and it lent itself to an excellent action sequence in an episode full of them. It could be argued that Octavia’s finisher was a little too easy but my reading of it is that Luna was weakened enough to let her guard down and give Octavia an opportunity she would otherwise never have had. Her final line to Luna “You’re wrong. There are people worth saving. Just not you!” was a great victory sentiment that was delivered wonderfully. 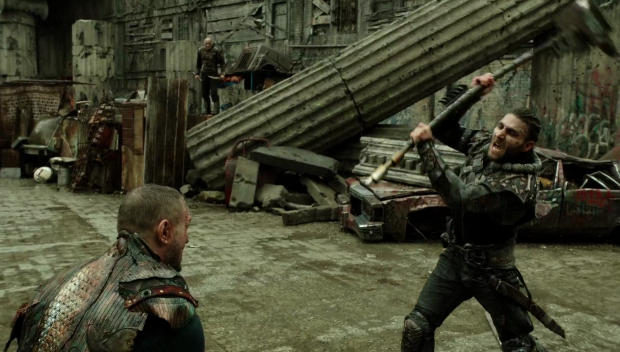 I really liked the approach Octavia took to the battle. Bellamy and Kane point out that she doesn’t need to beat 12 people, she only needs to avoid death until there is only one left. She carefully snuck around in order to ensure her own survival and only fighting to defend herself. Octavia basically plays the arena intelligently and uses the other combatants against each other. Most of the others are concerned with defeating all of their opponents and that’s what makes them vulnerable.

Octavia’s speech about working together and being one clan after her win was a solid if obvious sentiment. There was no way she was going to leave Indra or the others to meet a horrible fate. Her arc in the episode felt natural and I like that it called back to Lincoln in different ways. Progressing from “Lincoln would be ashamed of you” to Indra sincerely saying “Lincoln would be proud of you” was really satisfying and made for a powerful moment between these characters who have developed a mother/daughter bond over a long time. It’s also a nice touch that Octavia’s Warpaint was made to look like Lincoln’s tattoo. If her intention was to honour him then mission definitely accomplished.

Roan’s contribution is an interesting one as a lot of focus is given to how honourable he is. Echo breaks the rules in order to ensure that he wins and Roan’s response is to banish her for breaking the rules. He lets Bellamy go as well because he recognises that he was trying to prevent the cheating rather than protect his sister. Echo’s banishment is meaningful as it has been established how close she and Roan are. She has been his protector and biggest supporter for a while so his reaction is very much a shock. I was expecting more of a “I’ll deal with you later” response but it’s also consistent with what we know about Roan.

It’s a shame that Roan didn’t survive as it seemed that they were setting up his partnership with Octavia allowing them both to realise that cooperation was the answer. At least his death scene was incredible. Using the black rain to frame the fight was a great idea and contrasting between Luna being unaffected as Roan was burned by it added a sense of inevitability to it. Luna became almost feral and the visual of her drowning Roan was truly disturbing. 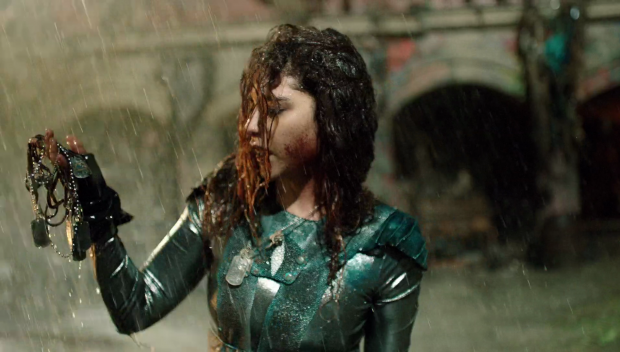 Luna in her element

The one death that didn’t really resonate was Ilian’s. He hasn’t been given enough time to develop so I’m personally not invested in him. He exists purely to further Octavia’s arc. His death felt inevitable as well though taking an arrow to the neck was really brutal and it was allowed extra emotion when Octavia had to put him out of his misery.

In general the action in this episode was really harrowing though there was a little too much rapid cutting that made it hard to follow at times.  I’m actually surprised this wasn’t flagged for being too violent but this show has always been more violent than pretty much anything else I’ve seen on network TV. Thankfully the episode always cut away from excessive gore but what was left in could hardly be considered tame. Roan smashing someone’s head in using a hammer was particularly gruesome as was Octavia cutting off someone’s arm before stabbing him through the mouth. It was impressive and really conveyed the violence of the situation.

I found the ending to be a genuine shock and can’t decide if it’s out of character for Clarke to make that decision or not. From a survival point of view it makes perfect sense to make a tough decision like this and stealing the bunker when everyone else is distracted is tactically very sound but it’s also incredibly cold. Eliza Taylor delivers the “we did what we had to do” line in a really detached way that suggests she is burying the emotion of her decision out of necessity. She is essentially condemning a lot of people to death so that she can save her own which is understandably difficult. This show is at its best when tackling complex morality so I hope that there is some opportunity to explore the reasons behind this decision. It’s possible that the next episode could show what led them to this point as it could be really interesting. It’s definitely a dishonourable tactic and renders the Conclave pointless but without it they would never have had that level of access.

An excellent episode that managed to juggle impressive action as well as strong character arcs. The focus was largely on Octavia who approaches the Conclave intelligently by sneaking around and waiting until the herd is thinned. Ultimately she only has to deal with Luna who presents enough of a challenge. Luna’s decision to doom humanity to death if she wins makes some sense given the horrors she has recently witnessed. It stands to reason that she would feel that they don’t deserve to be saved so her nihilistic viewpoint is somewhat justified. Roan is shown to be an honourable man when he banishes Echo for cheating and recognises that Bellamy was attempting to stop Echo from breaking the rules. His death at the hands of Luna framed by the Black Rain was great as well. Ilian was the weak link here because there has been little opportunity to invest in him though his death scene was appropriately brutal.

In general the action was well handled here and definitely not tame. It isn’t completely gruesome but we see a lot of detailed violence. Some of it was truly disturbing such as Roan being drowned. Clarke’s decision to steal the bunker while everyone else is distracted seems a little out of character but could also be a decision made out of desperation. I get the impression that she is trying to emotionally distance herself from the situation but I hope some time is spent exploring what led her to this point. The season isn’t over yet. 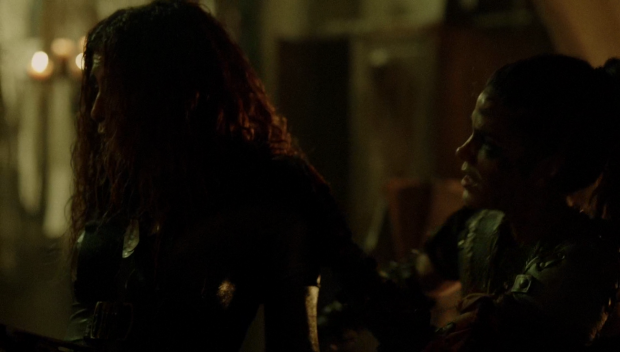