The 100 returns from hiatus with only 6 days to go until the Apocalypse with the reality of the situation really starting to sink in for the characters.

I’m really glad that the show has dispensed with last minute last hopes as a plot device for the moment as it was getting really contrived while robbing the show of the necessary drama associated with hopelessness. We’re at the stage where options are very limited with apparently no other option left to explore. 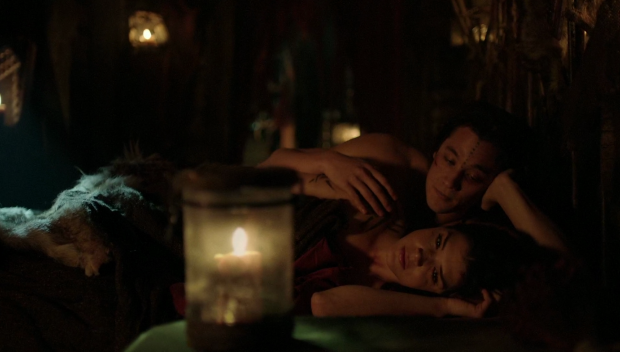 This allows the characters to make impactful decisions and for the motivations behind them to be explored. Raven is starting to accept that she won’t be making it out of this alive. Her health is deteriorating and she doesn’t have long left. As far as she’s concerned the only choice she has is to head to space, hop in a spacesuit and die with the entire universe as the last thing she sees. The calm and rational way she approaches this situation is almost eerie and the idea is really poetic. It remains to be seen if some magical cure will be discovered but I’d rather that not be the case. Of course I don’t want to lose Raven as she is the best thing in the show for me but there’s a lot to be said for a character being allowed to have a solemn and dignified end. The fact that her brain is deteriorating has a finality to it so to reverse that would be a contrivance.

Her scene with Murphy where she tells him her plan honestly and he reluctantly accepts it because of how sincere she is about it was heartbreaking. He tries to blame her for it but she won’t let him as she made the choice and is willing to accept it. As far as she’s concerned death is the only option as losing her mind is something that she doesn’t want to deal with. It’s a really mature attitude and easy to see Raven’s reasoning.

The hallucination of Becca was a nice addition because it lets Erica Cerra appear again. Beyond that it acts as an effective mirror to the presence of Alie last season. Alie was a nefarious presence for the most part and Becca is a soothing one so there’s a clear contrast there already. Becca’s influence is what gives Raven the idea to let herself die with dignity and provides the necessary information she’ll need to make it happen. It’s a bit of a plot contrivance but a welcome one because the scenes Becca appears in make for compelling viewing.

On the other end of the death spectrum is Jasper and Harper who have chosen to let themselves burn to death in a nuclear fire. It may seem overdramatic and there’s definitely a strong argument for that but I see it as capitalising on the history of the show and the characters within it. Harper is more undefined but we know a lot about Jasper and I honestly can’t see anywhere else for his character to go. He has been quickly unravelling for the past two seasons and I’ve enjoyed the sense of peace the prospect of death has given him this season. He’s suffered for a long time so now he seems ready to embrace death with a smile on his face and I can’t think of a more fitting end for the character. 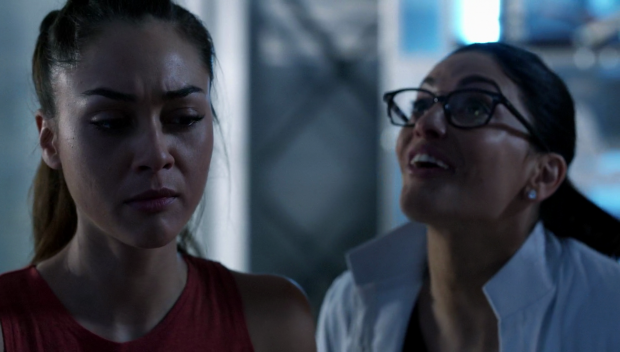 It also makes sense for a group of people to be ready to give up. Ever since coming to Earth it has been one crisis after another and I could see how that would push people to breaking point. When life is a constant struggle it’s entirely possible that people would feel that it isn’t worth living and that seems to be where this group is at.

It takes some convincing but eventually Kane and Jaha agree to leave them to it. There’s no point in forcing people to endure when they genuinely don’t want to especially when resources are so stretched. I’m not advocating assisted suicide or abandoning people in this way but I can see the point as far as this show is concerned. Extreme decisions need to be made in survival situations and letting this group die could be seen as merciful.

Monty joining the group in an effort to convince his best friend and girlfriend to go on living suggests that this plot isn’t over and may end with a change of heart for Harper at least. It would be far less satisfying if Jasper decided to live because it would mean more pain and misery for the character as well as everyone else around him. Fair enough if Monty gives it a try and fails as it will allow him to say a proper goodbye.

Octavia trying to turn her back on her violent ways was something I didn’t expect to see. Her relationship with Ilian has a tenderness to it that I definitely didn’t see coming. It doesn’t feel earned as this only started in the previous episode but what appears on screen is no less watchable. Octavia embracing the simple life as she prepares the Earth for those that come after them is somewhat cathartic for her as she gets to stop doling out death and help to create life instead. It does feel genuinely tragic when she is forced to embrace violence again in order to survive and the way she naturally goes back into that routine before declaring that it’s who she is had the right level of pain and regret behind it. The reveal that Ilian is actually a capable warrior feels like obvious foreshadowing given what happens at the end of the episode. 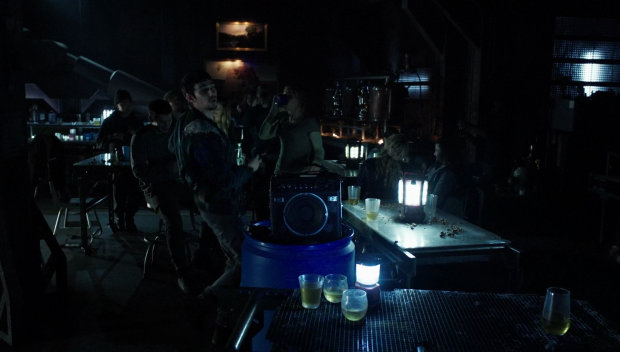 Ready for the end of the world

The political situation is given some serious attention here. Claire deciding to put herself forward as Commander feels inevitable considering she just became a Nightblood and it does feel like the only way to ensure the survival of all the Clans at once since they seem ready to tear each other to pieces.

Having Roan convince everyone to disavow Clarke as Commander due to the way she became a Nightblood was a welcome twist as it reminds us of the spirituality of the Clans. Clarke using artificial means to become a Nightblood could be seen as an insult to their beliefs and taints what being a Nightblood means to them. This enhances the mythology of the show and reminds us that the Clans are proud of their culture so won’t let an outsider come in and cheat their way to the throne.

Clarke being in charge could have made for some interesting stories. Her leadership would be tenuous as so few people would accept it so she would be facing constant opposition. Seeing how Clarke dealt with that would definitely have made for compelling viewing as it could possibly unite the Clans against her which would have been an interesting twist.

Instead we get something that promises to be a lot of fun. A Battle Royale/The Hunger Games type situation promises to give us some great action next week. It remains to be seen exactly who will be participating in the conflict. Octavia showing up could either have her fight for Trikru or Skaikru depending where she decides that her loyalty lies, Ilian could be the representative of Trishanakru based on the reveal of his warrior status earlier in the episode. If Octavia fights for Skaikru then that probably has Indra fighting on behalf of Trikru and the obvious choice for Ice Nation is Roan.

I could also see Bellamy being the warrior for Skaikru which would mean that Bellamy, Octavia, Ilian and Roan could be trying to kill each other next week. Who would win out of that is difficult to say and it would definitely mean the loss of significant characters. It’s an exciting prospect and also a really tense one. Logically Skaikru needs to be victorious so that Clarke can use her influence to ensure all of the Clans survive but equally I could see that not being the case. Time will tell and I’m interested to see the result. 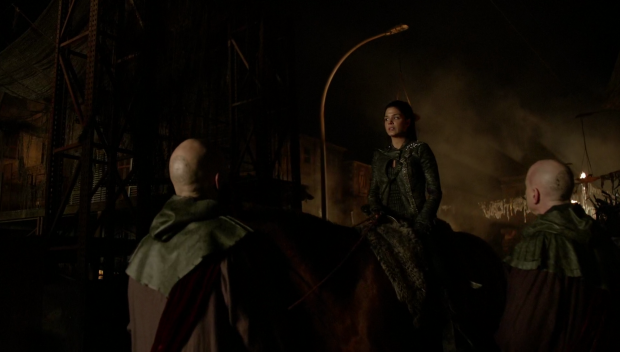 Octavia’s here for the War

A great episode that spends most of its time exploring how the characters react to the prospect of death. Raven’s acceptance that death is the only way out of her deteriorating brain situation is really powerful and dignified. The scene she shares with Murphy where he accepts and understands her plan is heartbreaking. I don’t want to see Raven die but there’s a lot to be said about characters being allowed to have a dignified exit. On the other side of this is Jasper and Harper who have just accepted the fact that they’re going to die along with a small group of people. Harper isn’t well developed but Jasper’s decision completely makes sense given his character and it’s perfectly reasonable that some people in the universe of this show are simply tired of living.

Octavia trying to turn her back on her violent ways was surprising as was her relationship with Ilian. These scenes are effective despite the relationship having no time to develop. The reveal that Ilian is actually a warrior felt like clumsy foreshadowing but Octavia lapsing back into her violent ways was appropriately painful. The political situation is really well handled here with Clarke trying to become Commander and being disavowed because the method of her becoming a Nightblood makes a mockery of their beliefs. The Battle Royale/The Hunger Games type scenario that follows promises to be a lot of fun and it seems that some significant characters might not make it out alive. Roll on next week.