The 100 begins its fourth season by picking up moments after the third season left off and starting to deal with the upcoming nuclear annihilation.

There’s never a dull moment for the characters in this show as this episode proves. We check in with pretty much everyone over the course of this episode and it just shows that there’s a lot of ground to be covered. It’s not always successful but there is merit to reintroducing everyone before delving into the story that will define at least the first part of the season. 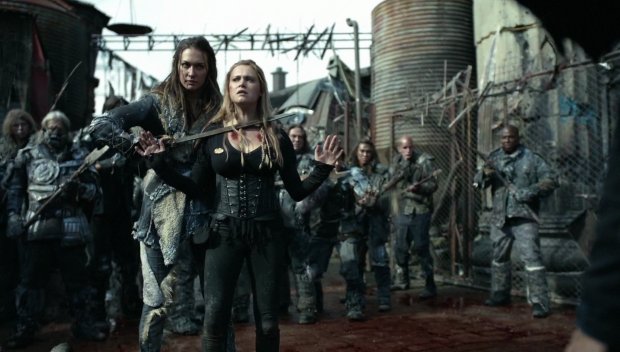 I found the opening of this episode to be really effective. Clarke has just done away with the City of Light and we immediately see the reaction to this. It’s far from positive as the people have essentially been expelled from paradise. It doesn’t matter to them that they weren’t really in control of themselves because they got to experience bliss in return. For many people that’s worth the price they were paying so being removed from that against their will isn’t something they are comfortable with.

Clarke and Bellamy see the people completely broken by what Clarke has done but Clarke never feels guilty for it. Even when she is being blamed for what is currently going on. It’s good that Clarke sticks firmly to her convictions and feels that in the long run she has done the right thing even if they only have 6 months left before the Earth is irradiated and rendered uninhabitable.

Unfortunately the rapid pace of the episode doesn’t leave a lot of time to give meaningful insight into how the characters feel but there is a really genuine moment between Clarke and Abbie. It’s only a few seconds but Clarke’s emotional admission to her mother that she loved Lexa followed by Abbie showing her motherly support was great.

Jasper has decided to go back to being self destructive after leaving behind total bliss. He is celebrating his freedom by drinking heavily while Raven works to restore the mainframe. They discuss how they feel about their current situation and there’s an interesting contrast there. Raven is glad that she can feel pain because it’s her pain and she can feel comfortable with the fact that she can own that. Jasper refers to this as “an upgrade” as he clearly feels nothing which is pretty common where Jasper’s concerned. He’s an immensely broken person and recent events will only worsen that. 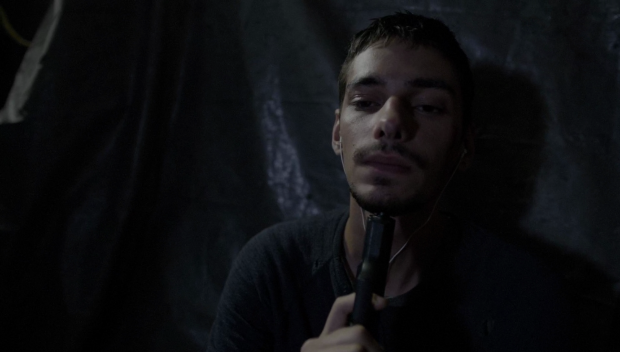 I wasn’t on board with Jasper almost killing himself because it feels played out for this character by now. Fair enough he’s a broken man but there should be other ways to show this by now. The passionless and self destructive behaviour was really effective but the almost suicide definitely wasn’t. I did like that finding out that the world will end soon perversely gives him something to live for. It’s almost as if a time limit is comforting which would make sense for someone who struggles so much with long life.

Jaha feels responsible for the current state of affairs and he really should considering that he started all of this. Alie had him under her control from early on but he should still feel a measure of responsibility for what has happened. Kane is willing to shoulder some of the blame as well and the horrified looks on their faces when they see how badly affected the people are say plenty about their current state of mind. Jaha definitely isn’t anyone’s favourite person at the moment but I get the impression he is willing to earn that trust again.

Bellamy and Kane have an interesting way of looking at things. Both characters made questionable decisions last season and it’s interesting that they decided that they are only going to look forward rather than backwards. It’s not something that I agree with because they should be made to reflect on what they did rather than simply ignore it and move on. It’s good that corrective measures are being taken but the consequence free approach that comes with simply forgetting about it is a confusing one.

Tensions are running high between the coalition and the Skaicru. Naturally the coalition blames the Skaicru for everything that has happened lately and relations have taken a massive step backwards. Ontari’s death is blamed on them and the potentially fatal injury dealt to Roan has created a power vacuum that means decisions will take some time to be arrived at. Everyone has a different view on what should be done next and this causes problems for the strained alliance. The internal politics in this show have always been compelling viewing and the tense political situation is handled well here. 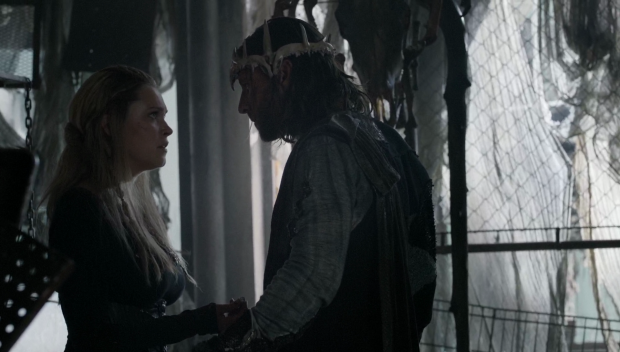 Clarke gives Roan the Flame and shows him another way

There’s lots of tension in these scenes with Bellamy’s attempt to negotiate being the best example. He is doing everything he can to prevent War but it seems completely inevitable at this point because he’s unwilling to agree to the terms that he is given.

Repairing the political situation comes down to saving Roan’s life. Using Octavia as a Trojan Horse to make it possible to gain access to him so that he can be healed is a clever idea and it’s a cool sequence. Once Roan’s life is saved he is able to rally the people behind him using the Flame but that decision isn’t an easy one to make. His people want him to kill Clarke so that he can absorb what she represents. Unfortunately she currently represents a threat to everyone and killing her would give the people confidence in him as a leader. Giving him the Flame means that he doesn’t have to kill Clarke but I imagine it’s a temporary solution and Roan will continue to be on shaky ground.

Octavia’s role in the episode is a fairly confusing one as she was content to go off on her own after killing Pike moments earlier from the perspective of the characters. Not that I mind her being around but it isn’t addressed in any way and really should have been. Maybe the writers decided they didn’t know what to do with her on a solo mission and thought she would be better served among the others but there was probably a more organic way to do it.

The approach to the impending Apocalypse is an interesting one. Only a select few know the truth which makes a disturbing amount of sense. There are two ways to do this; the first being to be honest and incite panic among the people which potentially creates a situation that can’t be controlled and the second is to let people live out their remaining days free of the burden that comes with that knowledge. Neither option is especially attractive but it’s interesting to see Clarke and the others wrestle with that decision and ultimately have the conviction to stand by it. The dictates of TV Drama tell us that the truth will come out but the secret being kept should keep things interesting. 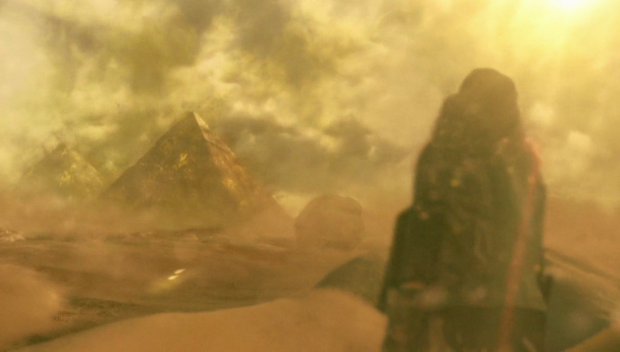 A taste of things to come

One major problem with this countdown to the end of the world plot is that it’s very large in scale so how can it possibly be resolved in a satisfying way? I doubt that every character will be irradiated and killed at the end of the season because that would end the show but high stakes plots are usually solved in contrived ways. This plot does allow the show to do interesting things with the characters but it will eventually have to be resolved.

A solid opening to the season that sometimes feels a little too busy. Clarke being blamed for expelling everyone from paradise and having to look at how broken everyone is was a really good start to the season and the hints at finding ways to move forward were compelling as well. There wasn’t much time for meaningful development but Clarke still managed to have a really genuine moment with her mother.

The political situation has become tense again and all hinges on Roan who is able to unite the clans by keeping the Flame rather than murder Clarke like many want him to do. It’s still tenuous but for now things are stable. Jasper’s self destructive tendencies are starting to feel a little bit repetitive but his reaction to finding out that they have 6 months to live felt right. It’s almost as if he finds it easier to live when he knows there’s a time limit. Deciding to keep the upcoming meltdowns a secret is an interesting idea as it’s one option of of two terrible options. Naturally the secret will come out but for now things are relatively stable. I’m not sure how the show can resolve the nuclear annihilation plot in a satisfying way as the stakes feel that little bit too high.