The 100 closes off season 4 with the arrival of the Death Wave and a race against time to make it into space before it’s too late.

Last week ended with the last ditch plan to escape into space and live on what’s left on the Ark. To make this happen, Raven needs to problem solve with not a lot of time to do so and figure out a way to make a two person craft hold 8 people long enough for them to get onto the Ark. 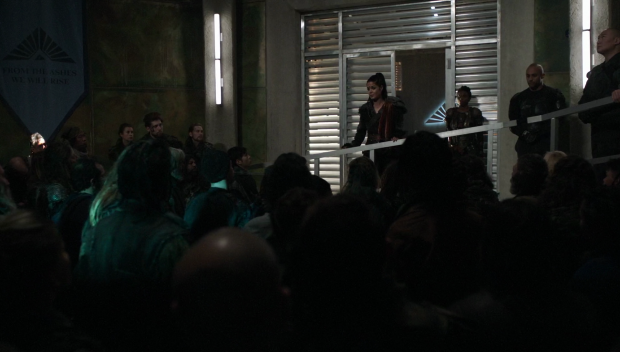 This episode reminded me of The Martian in some ways. There are notable differences but the idea of using science to solve a series of problems is a commonality that both of these have. This is by no means a bad comparison as I thought The Martian was an excellent piece of cinema with a brilliantly executed story.

The episode almost entirely focuses on the 8 people trying to get into space before the Death Wave hits and it takes the form of solving one problem after another. Focusing on this one group of people allowed the sense of tension and urgency to be built up over the course of the episode. Raven in particular became more unhinged as the episode went on when the weight of the situation gradually piles onto her.

Plots like this thrive on unforeseen problems and escalation so it’s no surprise when these two things happen in abundance. It would be boring if everything went according to plan and the group escaped with some time to spare so problems have to crop up.

The most significant issue is the damage to the communications system on the capsule. This means that sending a remote signal to the Ark telling it to turn the systems online isn’t possible and Raven is ready to give up. Lindsey Morgan plays her brief freak out wonderfully as if she was holding onto that last small hope and the prospect of losing it was enough to tear her apart completely. 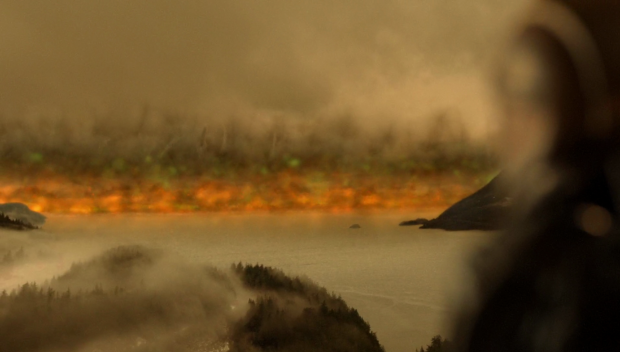 Of course it isn’t the end and it’s possible to use a nearby satellite dish to send the activation signal. Clarke tasks herself with that job and heads off with very little time left. As you might expect this doesn’t go as planned and Clarke has to manually trigger the signal. The problem with that is that there’s no time to do that and make it back so Clarke has to make a choice. She chooses to sacrifice herself so that her friends can live and accepts her apparent fate. It’s a great character moment that is the best showing of Clarke as a leader all season. When it comes down to it she is able to make the ultimate sacrifice in order to protect her people. The moment she accepts her fate and gets to work is a great moment that was well played by Eliza Taylor.

It’s a pretty safe assumption that Clarke won’t die and she makes it back to the bunker with seconds to spare. This somewhat downplays her sacrifice as she doesn’t actually give her life for her friends but it doesn’t take away from the decision itself as Clarke had accepted that she was going to die. There is a loss for her since a last second plan to let her board the capsule didn’t present itself so she still has to deal with living on Earth without her friends and separated from those in the Bunker.

There are some excellent visuals associated with Clarke’s mission such as climbing the tower with the Death Wave in the background quickly closing in on her position. It’s an imposing and ominous visual that highlights the danger of the situation but also the beauty of it. This entire season has been a ticking clock and that image sums up the inevitability that has defined this season.

The difficult choice is furthered by showing the others waiting for Clarke’s return until the very last second. Bellamy doesn’t want to leave her behind but the choice becomes about leaving her behind or everyone dying. Raven is pragmatic about it and the decision is made to leave but it’s definitely with a heavy heart as nobody wants to leave Clarke behind. They will all be eternally grateful but there’s a sense of regret to it as well. Bellamy voices this feeling the loudest as it hits him harder that they have effectively abandoned Clarke. 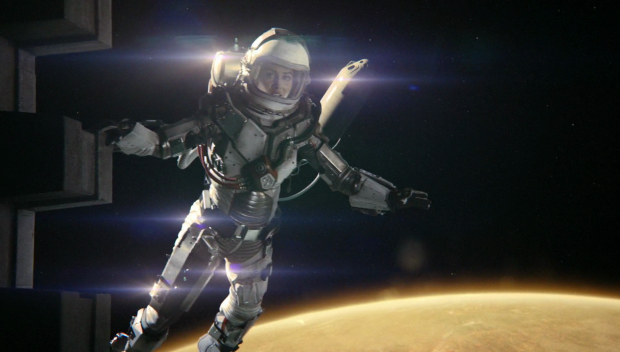 Raven’s development in this episode is limited due to her being focused on solving one problem after another. Her sense of panic and becoming more overwhelmed makes up much of her emotional arc. There is some pay off for her when she gets to live out her wish of taking a space walk. Despite the fight for survival that makes up the situation there’s a sense of wonder about it as Raven gets to achieve her dream.

The space sequence was really tense. It really felt they were racing against time with each successful step keeping them just ahead of certain death. The urgency associated with sharing a very small oxygen supply helps build on this and makes the success feel more satisfying when it finally does come.

Other characters have some opportunity to shine as well. Murphy and Monty are able to work through their differences when paired up on a mission which proves to be fairly entertaining. They essentially bicker with one another but there’s a lot of pain in those words and this does allow them to come to some sort of understanding which is definitely required if they’re going to be stuck together for at least five years.

Echo decides that she doesn’t want to take her chances in space and would rather allow herself an honourable suicide. Bellamy spots what’s going on and talks her out of it which makes for a nice moment between them that could be hinting at a relationship starting between them when they’re in space together. Bellamy will likely end up with either Raven or Echo and I’m not sure what would be preferable. 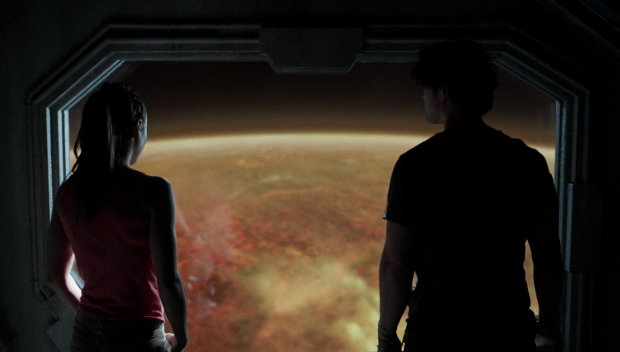 One thing the episode struggles with comes as a result of the singular focus. Considering “Praimfaya” is a global event it would stand to reason that we would get to see how it affects the other people. We do get that brief scene showing Octavia taking charge of the Bunker and delivering a rousing speech about surviving under harsh conditions. This and the scene before it where she and Bellamy have a brother/sister talk are all well and good but it would have been impactful to see all those not lucky enough to be inside the Bunker consumed by the Death Wave. It would have been grim but would also have humanised the situation and shown the actual cost in human lives the radiation danger represented. After an entire season of build up it’s surprising that the show doesn’t lean into that tragedy.

The ending was nice and tantalising. A time jump was inevitable as it allows the show to move forward away from what we have seen before while allowing the characters to develop in new and interesting ways. We can also explore the time on the Ark or in the Bunker through flashback next season but the prospect of jumping forward 6 years allows for massive changes in the characters.

Clarke watching the ship land and finding out that it’s a prison transport raises a lot of questions. Where did it come from? Why was it never talked about before? Who’s in there? It makes sense to introduce a lot of new characters as the numbers have dwindled a lot recently so a group of prisoners could shake up the show in interesting ways. Another mystery is who Madi (Imogen Tear) is and where she came from?

A well executed finale that kept the focus on a small group of characters allowing the tension and urgency to build throughout the episode. The plot is basically a problem solving one that intensifies as the time runs out. Most of the drama is achieved with several problems slowing everyone down and needing to be solved on the fly. Clarke’s mission to activate the satellite tower to send the signal that powers up the Ark is a great moment as it means a massive sacrifice for Clarke who decides that protecting her people is the most important. It has weight because there is a loss associated with it even if it isn’t her life. She has to live alone and can’t spend the five years with her friends. This choice is echoed by the other characters who have no choice but to leave her behind. This whole sequence is met with stunning imagery as the Death Wave quickly approaches.

Raven’s development is somewhat limited in this episode as she has to solve the problems but there’s a pay off for her when she achieves her dream of doing a space walk. There’s a sense of wonder to the sequence despite the constant ticking clock. Other characters like Murphy, Monty and Echo get solid moments throughout as well with a particularly well done scene between Bellamy and Echo. One thing the episode doesn’t do very well is show the implications of the Death Wave. Save for a short yet effective scene involving Bellamy and Octavia that leads to Octavia showing her leadership skills we see nothing of anyone else. It would have been grim but effective to see the Death Wave consume everyone not lucky enough to make it into the Bunker. The ending reveal of the prison transport raises a lot of questions that will likely be answered next season and the prospect of the time jump is an interesting one. 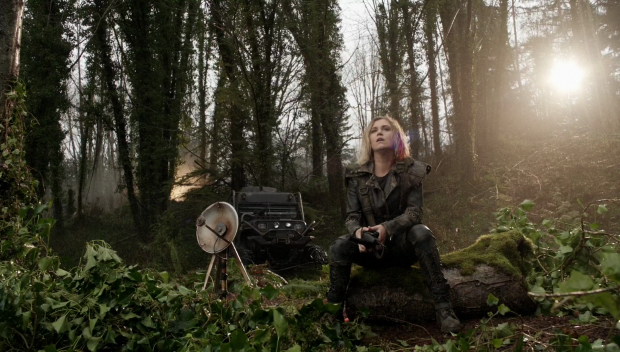 Clarke hopes for someone to answer

This has been an uneven season for me so I hope that The 100 gets back to the intense characters drama that it has historically been good at rather than the end of the world stakes that plagued this season. It wasn’t terrible but wore a bit thin after a while.

I think the time jump will be good for the show as it allows the characters to move on and new relationships to form. I’m not sure what way things will go but it’ll be interesting to see the show essentially do something of a soft reboot.

In terms of reviewing the show I think I’ll be stepping down after this season. It’s not that I don’t like the show but there are other shows I am more interested in covering and I just don’t have the time to do everything. I would be interested in keeping reviews of the show on the site so if you happen to be interested then drop me a line on @KneelBeforeBlog on Twitter or email me on craig@kneelbeforeblog.co.uk. I’m always keen to expand the base of writers so if this interests you then get in touch. 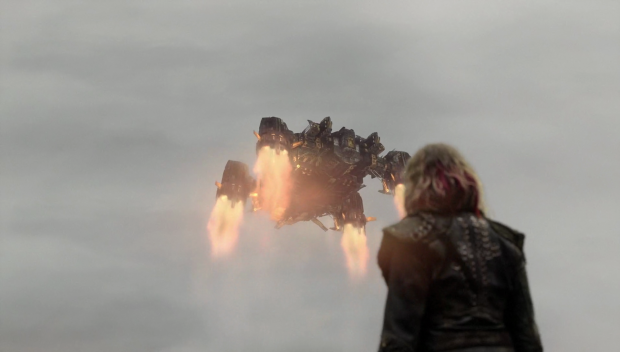