The 100 picks up on the ending of the previous episode and tells the story of the residents of the bunker following Praimfaya.

This show has always been about survival in one form or another. I mentioned last week that the Grounder philosophy is that life is a fight that only ends with death and that certainly rings true in this show. Any stability is quickly shattered in favour of the next problem. In general this makes for engaging television because there is very little drama in stability so framing the storytelling around weathering one crisis after another is a natural way to keep things interesting through creating tension and conflict. 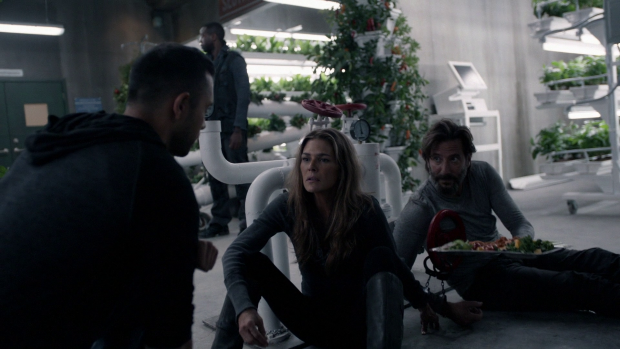 Kane and Abby have to address their relationship

Last season ended with more people than the Bunker could sustain entering it but there was a great deal of determination to make it work because the situation was a temporary one only supposed to last 5 years. The people are certainly hardy enough to endure difficult living for a few years if the end result is that they can return to the surface for a life that will be considerably easier.

This episode picks up roughly around the same time as the previous one with the only crossover being when Clarke tried to dig into the Bunker and failing. Abby notices Clarke’s efforts and realises that they are stuck under thousands of tons of rock so returning to the surface has become impossible. Naturally this creates panic among the population as they don’t have the resources to sustain everyone in the Bunker indefinitely. The permanence of the situation causes a lot of unrest and turns the population into a ticking time bomb.

Eventually, a group of what were once known as Skaicru, lead by Hydroponic farmer Kara (Kyra Zagorsky) stage a mutiny and lock themselves on the level containing the farm and water recycling technology. Effectively they devolve into a “them or us” mentality and choose to take the opportunity to save the people they care about. Talking about being Woncru (one crew) is all well and good but that philosophy has to be believed and at this point it just isn’t. There was a degree of peaceful coexistence when escape was a possibility and there was enough food to sustain the population but a desperate situation creates desperate people who show their true allegiance. In the case of Kara and those who follow her their allegiance is to who they consider their people and they are content to condemn the rest of the population to starvation if it means that they survive. 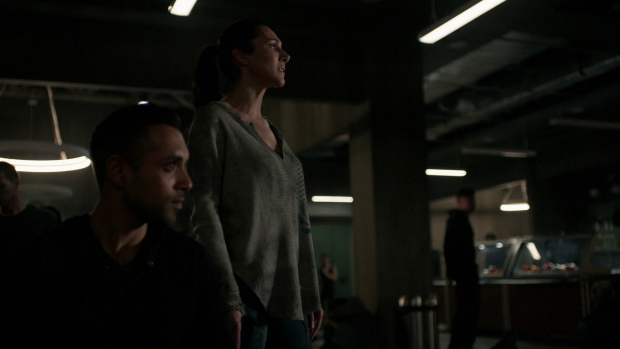 The beauty of this is that Kara’s point of view can be understood. She is a desperate woman who is still grieving the death of her husband who was lost in the initial struggle for places in the Bunker. As far as she’s concerned her actions are justified because they are the only way to avoid making difficult decisions in the future. Her resistance to the idea of culling the population is clear so it’s easy to extrapolate her actions as being the only logical choice. Of course she is actually still deciding to cull the population but she doesn’t have to face the people who won’t survive so it’s considered better. There is no “right” answer in this scenario so even though Kara’s point of view is skewed by her own selfish desires she does still have the best interests of those she cares about at heart. This show has always been good at presenting difficult moral choices and following through on them with no easy fix. The character motivations don’t always make the most sense but not finding a miracle solution is one of the hallmarks of this show which makes situations like this more compelling. The episode could have done more to establish Kara as a counter to Octavia but as antagonists go she was good enough for the most part.

Octavia begins her journey towards leadership once the mutiny happens. Before this Gaia and Indra both encourage her to step up because she is the obvious choice as far as they are concerned. Octavia sees herself as a warrior rather than a leader but unlike much of the population she truly believes in the concept of Woncru so is best placed to turn that idea into a reality. Her skills as a warrior allow her to enforce it as well so her arc is about accepting those responsibilities and deciding to lead the united people.

Advice comes from the most unlikely of sources in the form of Jaha who relays his experience of being in charge of a society when resources were strained. He talks about the tough decisions he had to make and how they served the greater good even if they weren’t popular. Jaha’s words do resonate because Octavia is in a position to understand the meaning of them. It’s easy to condemn decisions when the situation is out of your control and results in the deaths of people close to you but when considering the people as a whole there is a need to be dispassionate so that the majority can survive. Octavia understands this now and is able to adapt Jaha’s advice in her own way. 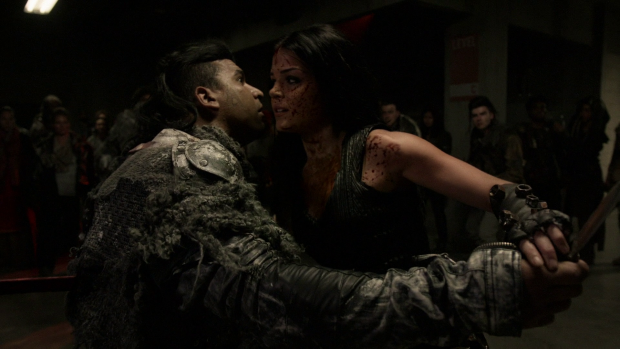 Octavia shows what happens if people don’t follow her

There’s a lot to unpack from this. Jaha has been a problematic character throughout but he has consistently stood by his decisions and made few apologies for them. He genuinely believes that they were the right thing to do based on available information. I ike the way he uses the example of floating Octavia’s mother because he felt that her actions brought them closer to death. His aim is to make Octavia understand the thought that goes into making such big decisions and clarifying that it’s not personal.

Morality is never black and white in this show and Jaha is a good example of that. One thing that can be said of him is that he has always had a strong sense of Humanity. He is willing to make tough unpopular decisions and is fully aware of the Human cost that they carry. His encouragement of Octavia in this episode comes from a very compassionate place as he wants to minimise the bloodshed that will definitely occur if he opens the door and lets an angry mob in to stop the mutiny by massacring everyone inside.

Octavia takes charge of the situation in a really impressive way by essentially forcing the people to think of themselves as one society rather than a collection of different factions. She offers a simple choice; be Woncru or an enemy of Woncru. It’s technically democratic though being in opposition of Octavia’s ultimatum isn’t recommended as that results in death. It’s a really powerful and effective scene with a powerhouse performance from Marie Avgeropolous who plays Octavia as confident and full of authority. Octavia’s movements as she easily dispatched those who oppose her are skilled and graceful as she makes it clear who should be followed. 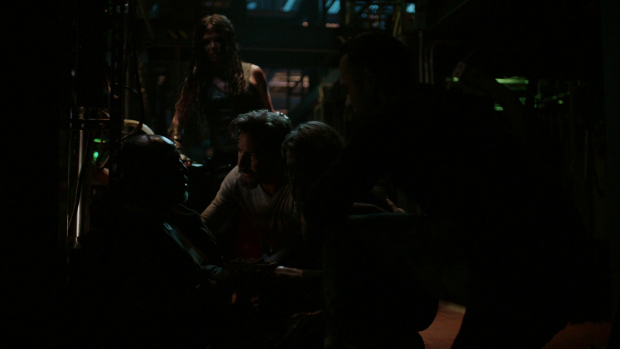 Her interpretation of Jaha’s advice when she takes her place as leader of Woncru is interesting. She clearly understands his point of view but doesn’t want to make decisions that condemn specific people to death. Her solution to this is to allow the people to fight for their right to survive in a Gladiatorial arena reminiscent of Ancient Rome. Her idea is for anyone who breaks the rules of the society to be put in the arena to answer for their crimes. This also provides entertainment for the masses and offers some compromise on the need to cull the population without Octavia deciding who lives and who dies. It’s not a perfect solution but there is no such thing and whether Octavia has done the right thing is open for debate.

Kane and Abby’s relationship is well handled in this episode. There is tension between them because of Cain’s decision to force Abby into the Bunker. He tells her that it’s because the society needs a Doctor but she points out that this rationale didn’t stop him trying to float her back in season 1. Eventually he admits that it’s because he loves her and couldn’t bear to let her die. The tension between them is well performed and feels natural given the circumstances. It’s very clear that they haven’t entirely reached an understanding at least in that timeframe and the appearance of Kane in the arena brings in extra complications as well as developing a mystery around what he did to end up there.

This episode marks Jaha’s death after dodging it so many times. His death is both impactful and moving which befits a character that has been in the show in the beginning. There’s no denying has his contribution to the show has been variable with a notable mistake of his being the introduction of A.L.I.E. as well as the questionable decisions he made as a leader. Despite that he has been a significant character who carries a lot of dramatic potential. His presence will certainly be missed in the show and his death felt appropriate for the character. 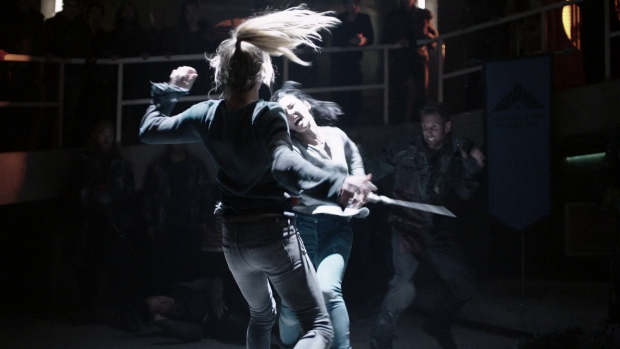 That’s one way to deal with population control

An excellent episode thet explores the situation in the Bunker following Praimfaya. Octavia’s reluctant movement towards leadership is really well handled and feels earned when she decides to pursue it. I like the way she took the advice of Jaha and interpreted in her own way in order to handle the situation. The morality is far from black and white but she sticks to the decision she makes and follows through on it because she believes that it’s the best way forward.

The episode does a great job of showing the growing desperation in the Bunker and how grim the situation is soon to become. Kara makes for an engaging enough antagonist though isn’t featured enough to make her a true oppositional force to Octavia. The handling of Abby and Kane’s relationship was wonderfully complex without a simple resolution and enriched the characters in how it was handled. Jaha’s death was appropriately impactful without ignoring his questionable actions in the past.