“The Children of Gabriel”

The 100 continues to build the background and mythology of Sanctum by introducing characters native to that planet and exploring how they relate to the new arrivals.

At some point someone will have to come up with a collective noun for the characters of this so so that they can differentiated from the other factions that are starting to come into play. For now I’ll stick with Wonkru as that was the last formal name they were given. This episode introduces two new factions for them to deal with; The Primes and the titular Children of Gabriel. It’s a fairly familiar setup in that there are opposing factions in conflict with one another though we’re still at the early stages of understanding who they are and what motivates them. 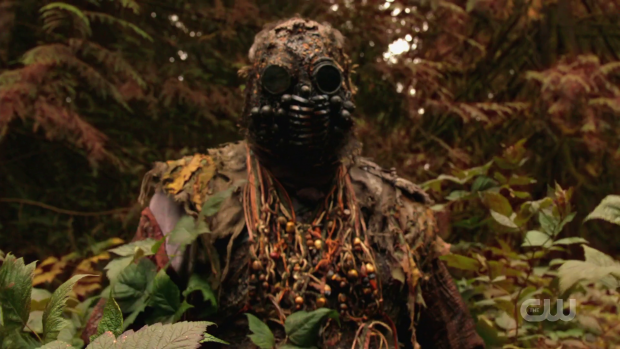 Despite the title, most of the time is spent with the Primes who act as something of a Royal caste because of the Nightblood. As such they feel that they have some sort of claim on Sanctum and are the rightful rulers who can make all of the decisions. There’s no denying that the settlement they have built is a functional one and that their philosophy is peaceful but there’s still a lot of ground to cover in terms of how they see themselves relative to others. The Children of Gabriel act as the antagonists for the episode because we see this group from the perspective of the Primes which will more than likely turn out to be heavily biased after misguided beliefs and horror stories that will be passed down through the generations. This show is all about exploring different perspectives so it’s clear that there is more to the story than we are currently seeing.

On the surface the Primes seem like reasonable if overly cautious people Russell (JR Bourne) acts as their leader and is understandably wary of the new arrivals. He’s very careful not to make a decision about whether they can stay because he has no reason to trust them. Clarke takes on the role of spokesperson for Wonkru after Russell basically assumes that she’s in charge based on the way she conducts herself. Raven is the only one to openly object and Bellamy actively backs her so it’s clear that despite the obvious misgivings the group still see Clarke as their leader. I’m not sure it makes a great deal of sense given everything that has led to this point but for simplicity the writers need a single voice to represent the group and Clarke has historically been good at that sort of stuff so she’s naturally elected.

Her main argument is that her people need help surviving their new surroundings and need a place to live. She talks about wanting a peaceful existence but Russell has his reservations having heard everything about her past thanks to Jordan being very forthcoming with information. The dinner scene where Clarke shares a meal with Russell and his wife Simone (Tattiawna Jones) is interesting because it acts as a minor trial for Clarke who is forced to account for her actions and confront the chequered past of both her and her people. Russell sees violence as a “contagion” and he doesn’t believe that the new arrivals are capable of living peacefully despite their best intentions based on how violent their past has been. It’s perfectly understandable to not want such an unpredictable element introduced into a peaceful living situation so immediately Russell is an intelligent and compassionate character with a strong challenging dynamic with Clarke. It’s good to see opposition manifest in different ways and that compelling stories can be told without the immediate threat of violence. 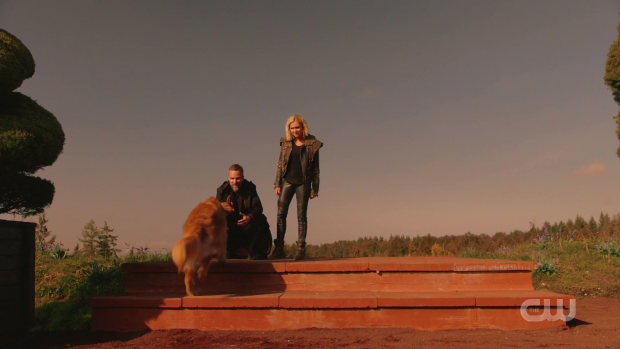 The problem with this is that it highlights that the Wonkru characters are stagnating. This very episode delivers another example of Murphy worrying about being a good person after he fears ending up in Hell following his near death experience. It may be slightly remixed but it’s another version of something we’ve already seen, the challenge to Clarke’s leadership on Raven’s part is another instance of mistrust that doesn’t move things along and there are further lingering threads that aren’t explicitly referenced her but exist all the same. This episode in particular introduces a few intriguing new elements that are fertile for development but when it comes to the lingering plot threads there needs to be definitive progression that moves both the story and the characters along otherwise the show risks being stuck in a loop and the compelling new elements could become swallowed by redundant plotting if the writers don’t take steps to resolve them. There is an opportunity for Wonkru to make a good impression thanks to Clarke saving Delilah (Ashleigh LaThrop) from the Children of Gabriel acting as proof that her people can be trusted. This is enough to have the current small group welcomed on a trial basis.

As I’ve mentioned, the Children of Gabriel aren’t explored in much detail though there is some explanation of their backstory. They are descendants of “The Demon Gabriel” as Russell puts it. Gabriel was the first man to go berserk during the red moon and kill a bunch of people which led to him being banished. Now his descendants populate the area outside the shield and appear to be savages in comparison to the Primes, at least as far as the Primes are concerned. They are also looking to impress someone referred to only as the “Old Man” which suggests some sort of hierarchical structure with a leader in need of constant pleasing at the top of it. The group will definitely be fleshed out further in the coming episodes but for now the focus is on the negative perception of them. There are hints here and there of something deeper but for now it’s best to keep the narrative relatively simple.

Octavia quickly manages to make an enemy of them despite repeated insistence from Bellamy not to engage them in order to free their people. Despite the fact that the Children of Gabriel are withdrawing Octavia savagely attacks and murders them because that’s the only way she can see to solve her problems. Bellamy reacts with disgust and leaves her to fend for herself because they can’t afford any more enemies at this point. He mentions that Monty gave them a second chance that shouldn’t be wasted. Octavia can’t see that what she did was wrong so Bellamy makes it clear that she isn’t welcome until she understands. This points towards that progression I was talking about and it makes sense for Octavia because she only reacts to extreme displays so perhaps being truly isolated is what she needs to realise the value of life and other people. Bellamy’s final words “My sister died a long time ago” are clearly cutting and hint that Octavia may have some semblance of her former self buried deep within her. It remains to be seen if she will be able to find it but isolating her for a while might be interesting. 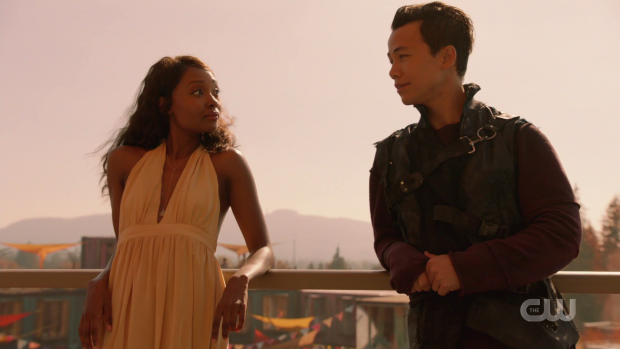 Jordan tries his hand at flirting

It looks like she’ll have company in the form of Diyoza who is banished because her reputation precedes her. The Primes talk about her being on a par with Hitler and Bin Laden which does seem somewhat harsh though stories can expand across generations as they are retold so it works that she would be seen as a historically evil figure even if it is overdramatic.. If this means that Octavia and Diyoza will join one another on a redemption arc then this could be a really good thing.

Hopefully there will be more opportunity for Diyoza and Madi to interact as what was featured here worked wonderfully. She wants Madi to experience a more normal childhood. She also expresses a maternal instinct towards her when they’re paralysed and captured by keeping her calm and furnishing her with a useful observation skill. These are brief moments but form the basis for what could be an interesting relationship that could help define Madi beyond her connection to Clarke. The writers are slowly sowing the seeds for more complex and interesting interactions.

The one character relationship that doesn’t work here is Jordan and Delilah. It goes from them first meeting to Delilah wanting to have sex with him in the space of a handful of words exchanged. It’s reasonable that there would be a mutual attraction there but having them reach that stage feels flimsy and unearned. It is entertaining to see Jordan have no idea how to talk to women and be so earnest in how he tries to relate to people. Delilah also makes an impression because of how genuine she seems. Developing their relationship towards a romantic pairing is something that should take longer and they would both be better served by the application of more deliberate development. 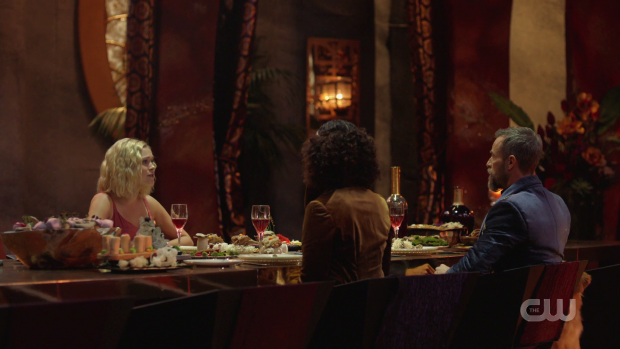 Dinner and a trial

A strong episode that focuses on developing Sanctum in a clear yet deliberate way through slowly fleshing out the new factions that are introduced. The Primes are the focus here despite the title and they come across as Sanctum’s royalty. Whether they deserve that accolade or not is up for debate but so far Russell seems like a reasonable man who wants what’s best for his people. The dinner scene where Russell and his wife Simone basically put Clarke on trial and force her to account for the terrible things she has done is really interesting as it sets up the idea of violence being a corrosive element that the Primes are concerned about letting anywhere near their society. The Children of Gabriel represent that idea as far as the Primes are concerned and they struggle to see Clarke’s people as being any different. Ultimately Clarke proves that they deserve a chance when she saves Delilah and the opportunity now exists to explore whether Wonkru can live peacefully.

The Children of Gabriel don’t receive much development but it’s clear there is more to come and there are hints of depth as well as motivation contained within their appearance. Octavia setting out to make an enemy of them is expected behaviour and leads to a really powerful moment where Bellamy banishes her until she learns the value of life and can commit to this second chance they have all been given. It makes sense to isolate her at this point and set her on a path to crawl out of being at rock bottom. It looks like Diyoza will join her on this journey as she is banished for apparently being up there with Hitler and Bin Laden in terms of historical evil. It’s somewhat overdramatic but illustrates how stories can evolve over the course of many years and generations. Hopefully there will soon be more of an opportunity for Diyoza and Madi to interact as there was some brief yet compelling stuff in here. The relationship that doesn’t work is Jordan and Delilah who move from being bashfully attracted to sleeping together which feels somewhat swift. Jordan is great to watch in his attempt to talk to a woman and Delilah is a good character so far.