The 100 continues to offer as many complications as potential solutions to the rapidly approaching Apocalypse problem.

Using science to turn everyone into Nightbloods so that they can be immune to the radiation is a really promising lead that bears exploring. The scenes set in the high tech lab were the most interesting in the episode for me because of the implied cost of that hope. 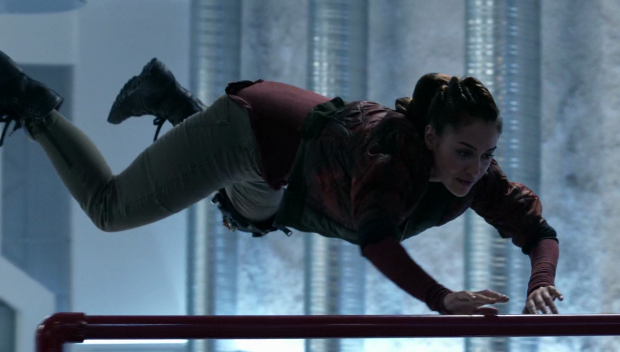 Raven has an interesting hallucination

Raven has another problem to add to her ever growing list when it turns out that she still has some of Becca’s code in her brain that is supplying her with much needed knowledge to save everyone. The flip side is that the effect of that causes seizures that will almost certainly result in her death. Raven has had to deal with a lot since the show began as has every other character but this latest thing feels really well connected to her as a character. She has always defined herself by her usefulness to the people around her and this knowledge allows her to continue being useful.

The seizure induced hallucination that Raven experiences looks great and is impressively trippy. It has the added benefit of being important to the plot but also allows the show to do something creative and different to what we normally see. The setting of an immaculate high tech lab is also unusual for this show so there’s a lot to find noteworthy in these scenes.

Raven shows a lot of nobility when she decides that she is going to embrace her newfound abilities and use them to help people until she can’t any more. It’s a very noble and heroic thing for her to do while also being consistent with her established character. There is a really cheesy superhero/superpower vibe that also creeps into this as feeling like abilities are both a blessing and a curse is all too common for that genre. It risks feeling somewhat out of place in this show not to mention the dramatic convenience of her developing these but for now it’s handled well enough.

Her contribution allows for a significant step forward to be taken in solving the problem when it is revealed that zero gravity is necessary to create nightbloods. This is consistent with what we saw of Becca’s work last season and gives the characters something else to work towards. The reveal that there is a rocket also housed in the lab could have been a little too convenient if it weren’t for the added complication of no fuel. It all seems to be coming together so well with the necessary fuel being in abundance in Arkadia. Naturally nobody can have a happy ending in this show, certainly not so early in the season so the destruction of Arkadia removes the potential for an easy resolution to this problem. 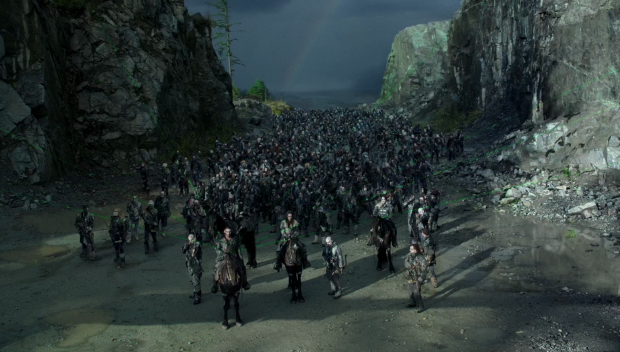 The Ice Nation prepare for War

The destruction of Arkadia was shocking and unexpected but also clumsily handled. Linking it to the survival of Octavia seems like it would work on the surface but Octavia’s survival is something that doesn’t entirely work because it seems to unbelievable that she would survive the stab wound as well as the fall. It all seems to be a plot device that allows Ilian to find her and gain access to Arkadia so that he can destroy it. Again, on the surface it seems like it should be good but there was nothing more to it than the bare details. The attempted justification that Ilian has gone insane with grief over the loss of the City of Light doesn’t wash as explanations go.

There was some potential in having Bellamy believe that Octavia was dead and have that motivate him for a while. It’s baffling that he finds out pretty much right away and removes all that potential. It’s a pity because Bob Morley was playing a grieving Bellamy really well and this could have provided scope for him to feed into the plot in really interesting ways.

The stand-off between Skaikru and Ice Nation didn’t work for me either but that’s largely because it feels far too soon for this to happen. Roan has always been portrayed as someone who is intelligent and fair minded as well as being a natural leader so his rush to assume Clarke is double-crossing him feels completely unearned. It’s likely that he is worried that someone might try to overthrow him as per the rumblings in the previous episodes but even at that this situation isn’t well developed enough for his decisions to feel natural. This plot has suffered from a lack of development through minimal screen time so maybe if this had happened more gradually it would work better.

Despite this I liked his discussion with Clarke about finding the middle ground. Using Arkadia as the bargaining chip on both sides is a really good idea because up until it is destroyed it represents the only hope for survival. The joint decision to share it along with the assurance that Roan’s people would help keep people out even through they aren’t the chosen few to survive makes a lot of sense and shows how reasonable these characters can be as leaders. It might have been a little premature to destroy Arkadia in this episode as there could have been some time spent on how the decision to share the space affects the people in both groups. 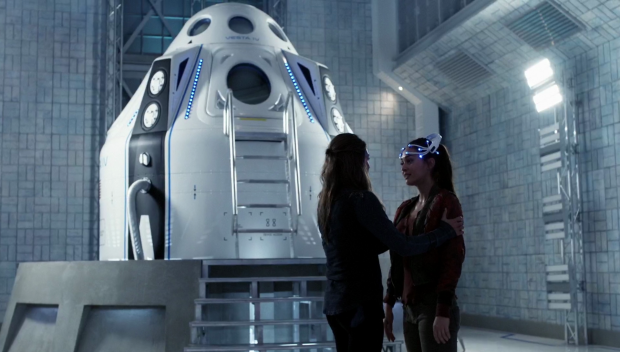 The stand-off between the two groups was really tense throughout as the mistrust on both sides means that there is always a possibility that someone could become too trigger happy and spark an all out War between the factions. I like how the episode continues to play up that tension for as long as it can.

Riley (Ben Sullivan) seems to be the biggest risk on the Skaikru side as he is resentful of being enslaved by the Ice Nation. It seems like a solid motivation for him to be unstable but we laughably know almost nothing about this character despite how prominent he has apparently been in the lives of many of the characters. It feels like a bit of a retcon to characterise him as an important part of the lives of so many since we haven’t seen this prior to this season.

Despite that the risk of him shooting Roan is handled well as a definitive moment for Bellamy who talks him out of it by appealing to his better nature and assuring him that he doesn’t want that kind of blood on his hands. Starting a War isn’t something that Riley would be able to live with as Bellamy knows all too well through his actions last season. Riley seems all set to kill Roan but eventually sees the better way and stands down. If Riley was a better developed character then his pain and mistrust would enhance this but at least it offers a really strong character beat for Bellamy who is starting to see the practicalities of the lessons he has learned.

An interesting episode that has some issues with it but lots of potential to carry through the season. Raven and Abby’s attempt to turn everyone into Nightbloods is really interesting thanks to Raven’s enhanced abilities that also come at a significant cost to her. Her heroic declaration that she’s happy to help people as long she can is a nice touch but could quickly become cheesy if not kept in check. The rocket that can help them into space to crack the Nightblood creation seems like an ideal solution until Arkadia is surprisingly destroyed.

The destruction of Arkadia was a shock that didn’t quite work because Ilian’s motivation is so flimsy and it’s a waste of Octavia being believed dead especially considering Bellamy already knows that she’s alive. The stand-off between Skaikru and Ice Nation works well because it’s really tense as both sides struggle not to start fighting. Riley’s part to play doesn’t entirely work because the character is so poorly developed but it does provide a solid moment for Bellamy who is able to relate his experience of having blood on his hands. Despite how reasonable Roan seems as a leader I’m not really buying his decision to go after Skaikru as his motivation for doing so isn’t well developed. The discussion he has with Clarke and the compromise they reach is interesting but the potential for developing it is ruined by the destruction of Arkadia. There was scope to see how both sides react to the reduced chance of being chosen. 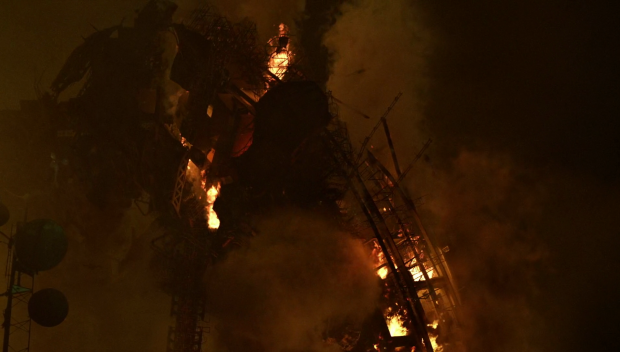