The 100 deals with the aftermath of the destruction of Arkadia as Raven tries to figure out a way to safely fly to space and return.

This episode picks straight up from last week with the former citizens of Arkadia looking on at the destruction and considering how all hope has been lost. It should feel more significant than it actually is considering their home has been destroyed and with it some semblance of hope that some of them will survive but I’m finding the “one problem after another” structure to this season to be a little tiresome. In broad terms each episode promises potential salvation in some way only for it to be destroyed by the end of the episode. 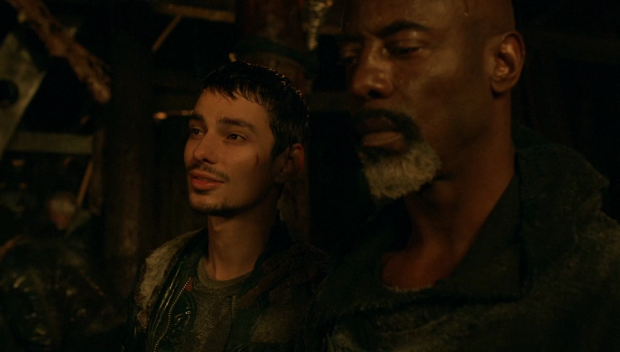 Time to give up

Not that the individual events themselves are badly done but it does make every episode somewhat predictable and makes any good news feel somewhat empty since it will inevitably be undone. A better way to handle this would be to spend some time exploring how the good news affects the characters so that the inevitable loss of hope is more impactful.

The loss of Arkadia is pretty much a microcosm of that as none of the characters are nearly as angry or upset as they should be. Jaha has a really defeated look on his face which definitely endears him to Jasper who has similarly given up hope. The major difference between Jaha and Jasper at this point is that Jasper has taken it upon himself to make the most of what time he has left by behaving in the most childish way possible where the pain of loss is very raw for Jaha. Jasper’s advice to “stop caring” sums up his position on the situation and it actually does seem to work for him

Jaha’s character arc was about him exploring giving up on survival and just making the most of whatever time is left. As with Jasper this manifests itself as self destructive behaviour in the form of drinking moonshine and lamenting everything that has been lost. He does eventually have a wake up call and comes out the other side of this fully committed to saving everyone once again. It made sense for sure but it was also done far too quickly. Having at least another episode of him experiencing life as Jasper does would have been interesting. I get that the characters are swiftly running out of time but these rapid fire character arcs don’t feel real or organic at any point.

Speaking of swift character arcs, we have Octavia who seemed to be on the road to forgiving Bellamy for his actions last season. Her position on Bellamy had completely changed by the beginning of this episode as shown when she blatantly told him that Octavia died when he killed Bellamy. She has gone from near acceptance to outwardly blaming Bellamy for Lincoln’s death and it has completely come from nowhere. I feel that the purpose of this is to get Octavia to the point where she is at her darkest and can understand the actions of Pike when she is almost driven to them herself. Her near execution of Illian as punishment for destroying Arkadia takes her to that darkest point where she is able to find a different perspective on choices. 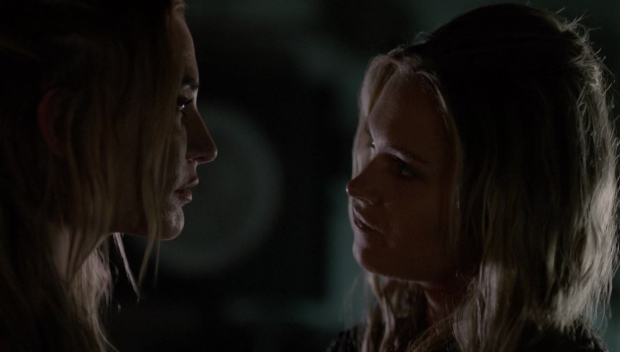 Just getting on with life

It’s especially significant since she almost kills him on the very spot that Lincoln was killed which quite literally puts her in Pike’s place. It takes Kane to help her realise that and Octavia proves herself to be the better person by not doing what Pike did. It’s an important step forward to her but I wish her journey to getting there didn’t feel so contrived as it robs the moments of some of its power. Hopefully this marks the start of Octavia’s healing process and we will see her less pained in the coming episodes.

Having Monty, Kane and Niylah making a case for Illian’s survival throughout the episode was a nice touch. It gives the group scope and allows for healthy debate when not everyone is so bloodthirsty in dishing out punishment for crimes. What Illian did was terrible but there’s a real danger of the various factions devaluing life by having anyone who breaks the rules killed so it’s good to see there are members of the cast unwilling to constantly live with blood on their hands. Finding punishment without killing is more interesting narratively and creates natural conflict within the characters.

The main plot of the episode involves Roan, Clarke and Bellamy transporting Hydrazine to Raven so that she can fuel the rocket to take her into space. This was really entertaining as it allowed for some really cool action sequences. I really liked the vehicle chase as it looked great and had appropriate stakes with the Hydrazine being at risk. The fact that a barrel of it ended up being lost added extra weight since the efforts proved to be futile. It may fall into the “one bad thing after another” structure but it works really well.

Roan and Bellamy proved to be a compelling pair as they have different stances on the issue of loyalty among the factions. Bellamy seems to think that there are plenty of people eager to get along but Roan doesn’t agree and thinks that Clarke is the only one who looks out for those outside of her own group. It’s a fair point and it’s easy to imagine why people would be compelled to only protect their own bubble even though there is a much bigger picture to consider. 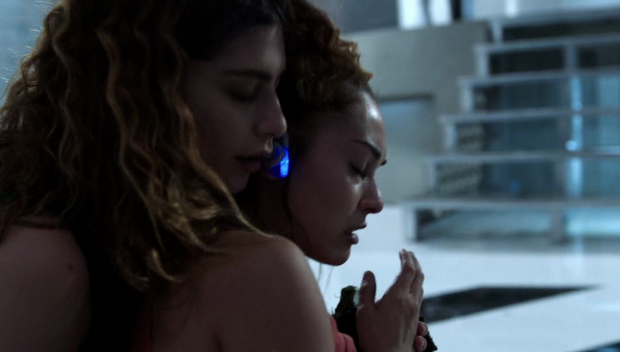 I don’t necessarily think that Clarke is as inclusive as Roan seems to suggest she is. It wasn’t long ago that she was really doubting her role as a leader and only considered survival from the point of view of Arkadia. She did eventually come round to the idea of including others but that was more out of necessity than anything else. It does appear that Clarke is going to be the one promoting togetherness from here on out which does make sense given how she has developed since the show began. It could be said that Arkadia’s destruction has freed her of that internal conflict as she is no longer burdened with deciding who gets to survive. A new plan needs to be created and it’s better if it includes everyone.

It’s impossible not to infer a connection to real world issues in this plot. Uncertainty in our own world is causing many people to look out for themselves with political leaders delivering messages promoting isolationism as well. It makes sense that these ideas would be lampooned in The 100 since political messages are at the heart of everything that goes on here. Naturally the show is going to promote a message of being stronger together because it’s a positive one and it’s a lesson that the characters will all need to learn sooner or later. Thankfully this political allegory doesn’t overpower the character moments but the episode is definitely all the better for it being there.

Outside of that Clarke’s characterisation is really strong. I really like that she is pursuing a relationship with Niylah. So far it is completely angst free and seems to be out of a mutual desire for intimacy without any serious ties. They are both people who need someone at this point and it doesn’t have to be any more than that. Niylah even recognises that Clarke is still grieving for Lexa and assures her that Lexa would be proud of her. It’s complex and shows a different kind of relationship while allowing Clarke to heal without feeling that she is being somehow unfaithful to Lexa.

I really enjoyed Raven’s scenes despite how outwardly predictable they were. She often has engineering problems that seem hopeless at first but prove solvable because Raven is apparently capable of solving any problem she puts her mind to. Having the remnants of Alie in her brain helps her in this instance but the problem of getting back to Earth safely isn’t one that’s easy for her to solve. 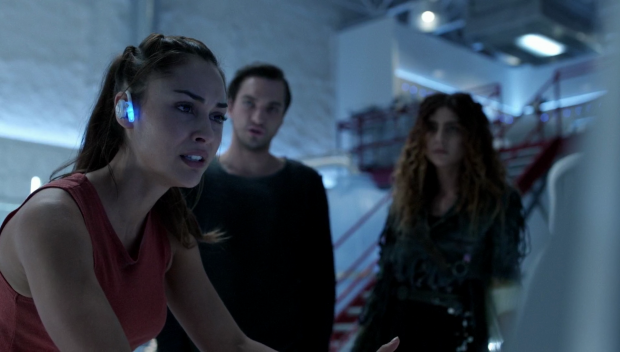 Last week pointed out that there were significant consequences to her tapping into that knowledge and using the technology. We know that Raven is fine with those consequences as she knows that others will ultimately benefit from it.

The effects are clearly seen in this episode by her having stress induced seizures brought on by her repeated failures. Attacking Murphy is another effect that amplifies the fact that she blames him for her injury. This causes Murphy to feel even worse about the fact that she will never forgive him. His self loathing is handled with enough sophistication to not be overly angsty and it allows for a really compelling conversation with Luna who is able to relate her own experience of hating herself because of being raised as a killer simply because her blood is a different colour. Her advice is able to help Murphy see things differently and start on the road to forgiving himself.

Luna serves a number of important purposes in this episode. She is able to stop Raven from killing Murphy and help her calm down a little. She is also able to suggest landing the ship in water instead of attempting a safe landing on land which makes the whole mission possible. Of course the lack of Hydrazine is a problem and finding that out causes another painful seizure for Raven. One problem after another yet again…

A solid episode that has some problems that the show in general needs to overcome. The “one problem after another” plot structure is starting to get really predictable as there is never any time for the more hopeful events to sink in which lessens the weight associated with them being taken away. Jaha’s arc of giving up just as Jasper has before coming out the other side was strong but happened far too quickly. Octavia putting herself in Pike’s position and realising that she is a better person than he is begins her healing but her shift from starting to forgive Bellamy to completely dismissing him doesn’t work at all.

Clarke, Roan and Bellamy’s role in the episode lent itself to some really impressive action sequences and allowed the show to make an interesting commentary on real world issues through what the characters are experiencing. The lure of isolationism contrasting a message of togetherness is clear and powerful. Clarke pursuing a relationship with Niylah is wonderfully complex as it is completely free of angst and allows Clarke to grieve for Lexa while moving on with her life. Raven’s plot works well enough but the solution was never in doubt. Her attack on Murphy and the seizures clearly show the consequences of what she is putting herself through and Luna is allowed to have a compelling  impact on the overall plot. 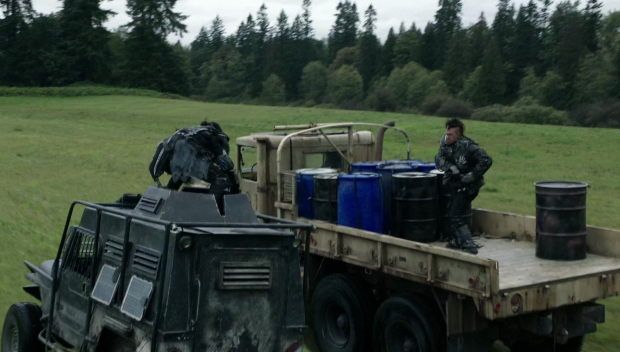