The Expanse is back into the swing of things, its disparate ensemble continuing to drive the narrative as everyone takes a few steps further towards the culmination of their various stories.

I’ve repeatedly mentioned, both last week and in write ups of season 5, that it’s the characters that make The Expanse what it is. The show’s commitment to portraying every side of a situation makes it far more engaging than many of its contemporaries and worthy of being mentioned alongside classics of the genre. Also, such focus on exploring how people deal with the decisions they make is what gradually begins to shunt current events in the direction of a final conclusion. 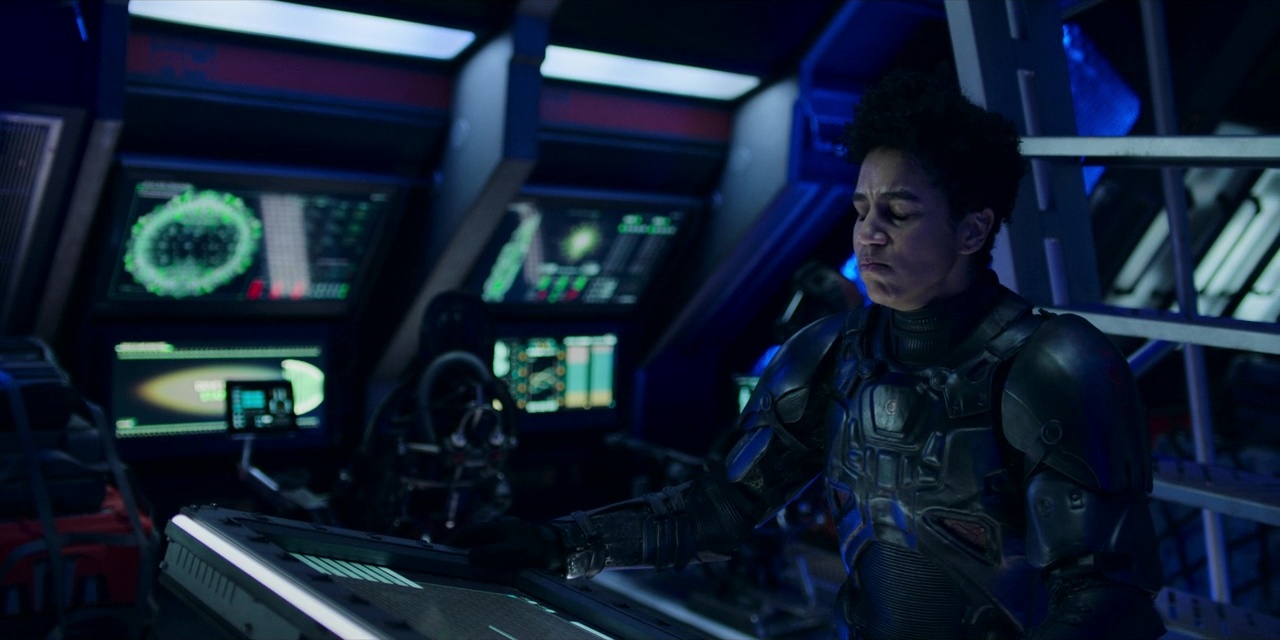 The main events this time around build on last week’s discovery of how Inaros has been sending asteroid strikes at Earth, and Avasarala, via Bobbie’s surprise appearance, instructs the Rocinante to locate the spotter ship – after which the episode is titled and thus signifying how much of the events revolve around it – and recover any Free Navy intelligence it might possess. Unfortunately, such a mission is a bit trickier than the standard seek-and-destroy scouting jaunts they’ve so far been on since, as Amos points out, incapacitating and commandeering an enemy vessel is much harder to pull off than simply creeping up and destroying it.

The engagement showcases the superlative effects work that has long been standard for the series, and the encounter being a chase rather than a full-on fight gives it some variation on the ship-to-ship fights usually seen, while the swift manoeuvring demonstrates just how complicated combat space flight would actually be if attempted when, unlike a lot of sci-fi, you’re actually constrained by the laws of physics. It also reminds us of what a superlative badass Bobbie is; even for a battle-hardened marine it’s quite a feat to leap out of an airlock between two spaceships – each probably soaring at multiple times the speed of sound – to land on one with seemingly little effort.

Naomi is ready to join her right up to the moment she has to jump out the ship, whereupon she freezes. It’s clearly the result of the lingering trauma she suffered throughout the events of last season, which culminated with the pervious time she performed such an action, undertaken in the full belief and acceptance it would be the last one she ever made. After everything she was forced to endure, both physical and psychologically, it would be unrealistic for her to experience no aftereffects from it, and it further marks her as one of the series’ most consistently compelling characters.

Clarissa immediately jumps out to take her place, also covering for Naomi in the process, and while you could cynically see it as an opportunistic attempt to ingratiate herself with a crew that is yet to fully accept her, she has just as much to lose from Inaros’ ultimate victory as everyone else, so allowing the best chance they have to get one up on him to be botched just to make a point would be an unwise course of action. 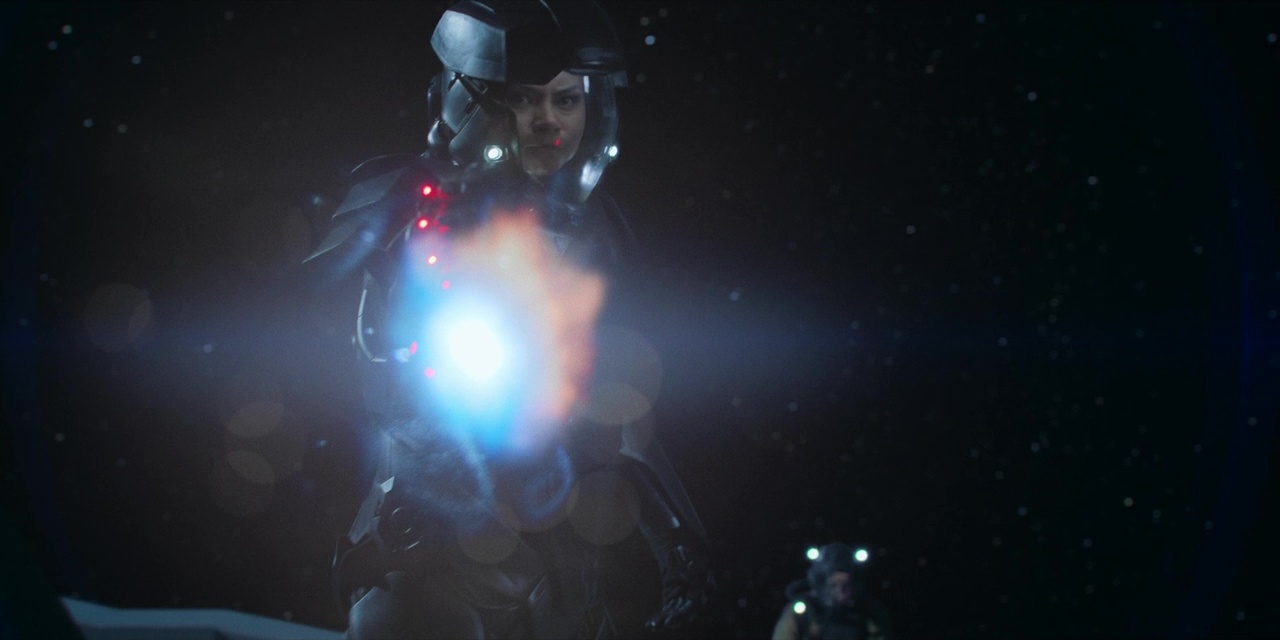 The heat of combat

Bobbie’s HUD judgementally analyses the two enemy combatants coming to greet her as “low threat,” and indeed she wouldn’t have needed any help had a third brandishing a rocket launcher not appeared from behind her. He might have managed to take her out were it not for Clarissa activating her berserker mode and moving so quickly it’s not immediately apparent what actually just happened over the previous two seconds. Unconscious and your head being orbited by globules of your floating vomit certainly isn’t the most elegant situation one can be seen in, even to someone who just saved your life, but such a thought wasn’t something she even considered in her reaction. It demonstrates that even if Clarissa hasn’t been accepted as a true ally she still considers the crew worth protecting whatever the physical cost to herself.

It was a genuinely touching moment when Holden referred to Clarissa as a crew member, actually accepting her as part of the onboard unity rather than someone whose presence is merely grudgingly tolerated. Her reaction it might well be the first moment of genuine happiness she has experienced in all her time on the show, what with her previously being consumed by either anger or remorse. Of course, the likes of Bobbie and Naomi will still be wary of her, but it’s nevertheless a small step towards attaining the redemption she so desperately desires now that it’s something she can let herself want without torturing herself with its unattainability.

There is some inconsistency over whether she is now being referred to as Peaches by everyone. While Amos continuing to use the nickname he bestowed upon her is to be expected, to hear Holden use it as well is a little jarring as it sounds informal and personal, which doesn’t tally for him talking about someone he is yet to completely trust. Perhaps she wants to be referred to as such, the name being symbolic of a new beginning and a desire to leave behind her old identity that was responsible for such much death, but if so it’s something that needs to be established else it may suggest some confusion over how she is perceived. 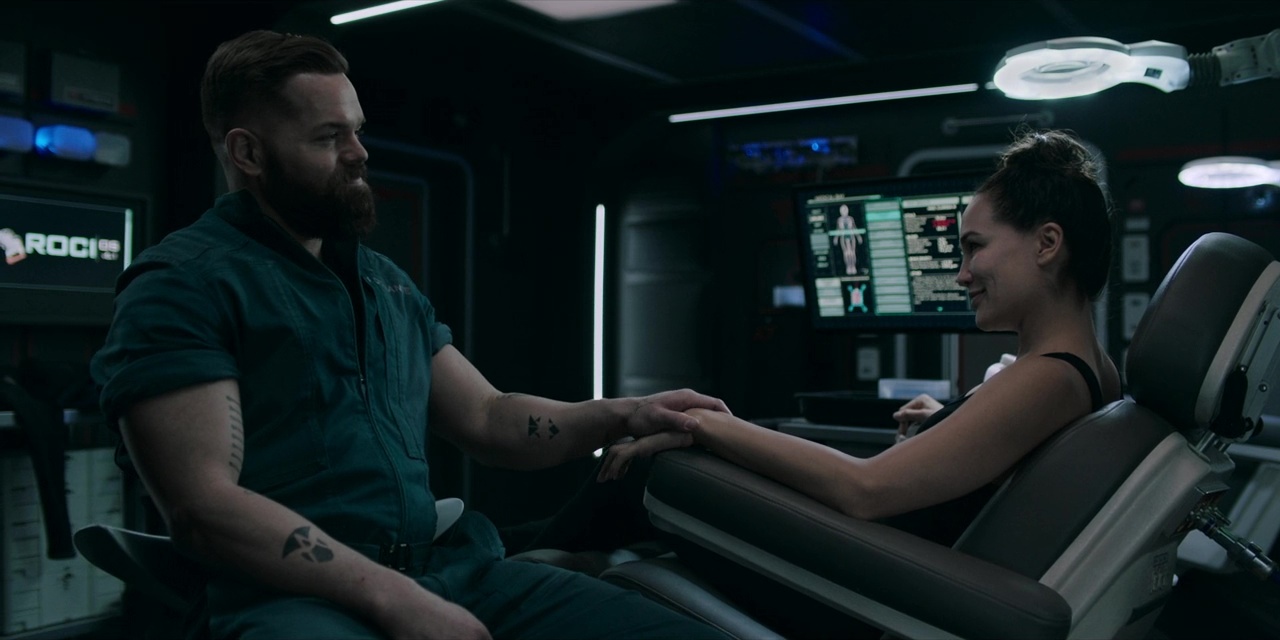 A moment of relief

Meanwhile on Ceres, we check back in with Filip, now confined to the brig after shooting Yoan last episode. While there was little ambiguity about what provoked him, his emotional expression makes it clear that he only killed his friend in a surge of drunken anger, and now given the chance to sober up and reflect on his actions it’s clear he regrets what he’s done. Although Inaros managed to write off the death as a military matter, he can’t ignore Filip’s volatility is causing problems for him, since if someone in a position of authority is perceived as being unable to act in a rational and controlled manner it erodes faith in the command structure.

While Filip is shaken by Inaros’ vehement disappointment, you can’t help but also imagine his confusion at such a reaction after acting like exactly the kind of man his father is raising him to become. Also, when you remember last season when Inaros mentioned he and Cyn sometimes came to physical blows over disagreements in a course of action, it comes off as somewhat hypocritical, and might well lead to his turning against his father’s iron-fisted command.

Filip may begin to realise that his father has really only seen him as a tool to be used rather than a child to be cherished. There haven’t been any moments that Inaros actually displayed any genuine love and affection for his son, rather perceiving and presenting him as someone whose accomplishments are merely reflections of his own. Indeed, Inaros’ voice cracking ever so slightly at having cause to mention his dead friend is one of the few flashes of genuine emotion he has ever shown. 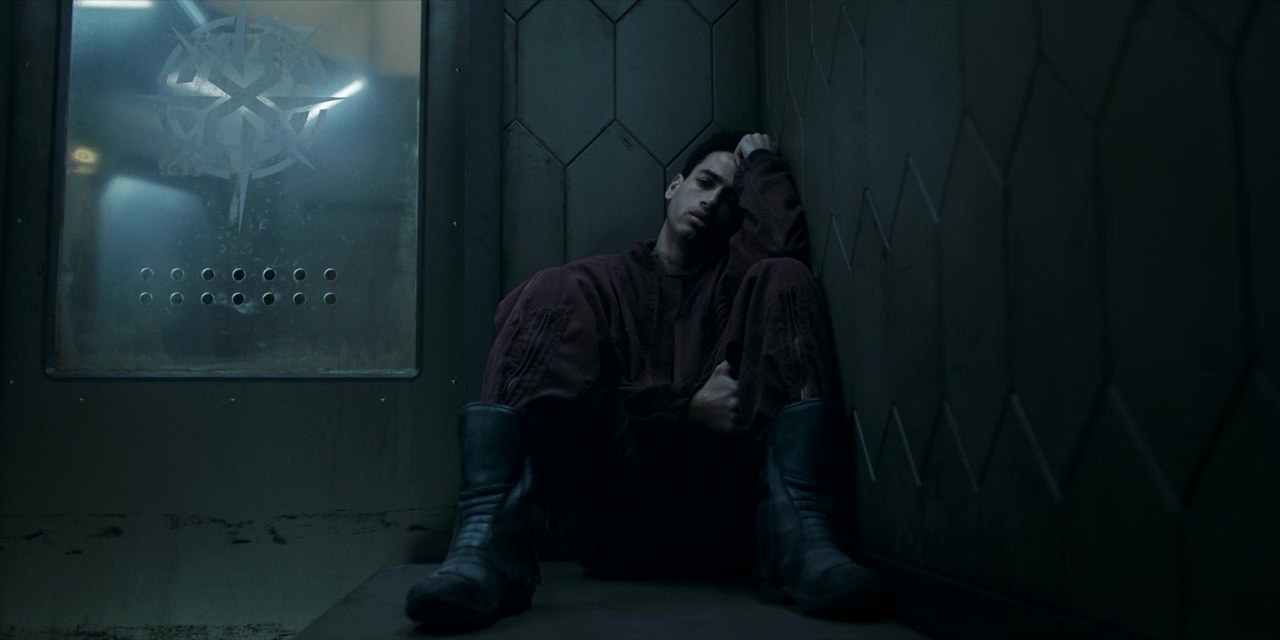 The cold light of day

Once again, Filip’s youth is a major factor in what he’s going through. People as young as him rarely have to endure thoughts and emotions of such intensity and complexity as he has dealt with, and him coming to realise that he can make his own choices rather than remain beholden to what others expect of him is likely the main direction this season will take him.

Aboard the Zenobia, Avasarala’s main points come from her interactions with the media, an unfortunate but necessary aspect of any premier’s time, which are primarily represented by Monica and her intrusive proclamations. The reporter is now seemingly of the opinion that Avasarala is exceeding the parameters of her power to shut down press access, and ignoring her requests for details in particular. It’s difficult to get an exact read on whether she truly believes this, or is merely expressing the antagonism she has decided her chosen profession calls for.

Since her introduction in season 3, Monica’s periodic appearances have largely been characterised by her being annoying and getting in the way, and her scenes in the last episode seemed to continue in this tradition. However, it now looks like she has an actual use, being drafted in by Avasarala to use her talents to put a human face on the suffering of the people of Earth, thus redirecting her self-righteous tenacity into something of more productive value. 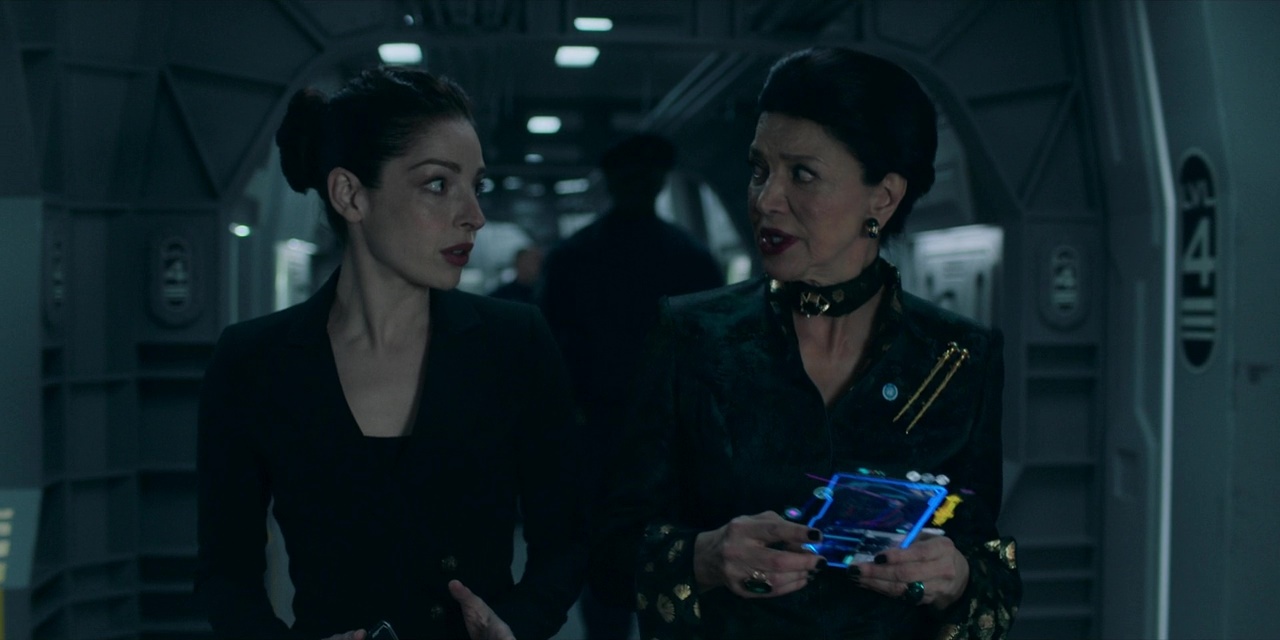 Many Belters, not unreasonably, hate Earth for the life of servitude it forced them to live, and as such are revelling in the destruction being rained down on the planet. However, while it’s easy enough to despise a perceived enemy when they’re merely a nebulous concept upon whom you can project all your suffering, when you’re forced to see them as actual people it can be a lot harder to take joy in their fear and anguish. The suggested manner of addressing this is also a great example of how certain situations bring out cooperation between people who don’t particularly like each other, but nevertheless have to work together for the common good.

Drummer and the Tynan don’t have a great deal to do, this time around merely meeting with a Golden Bough ship to offload Michio onto. However, it transpires that although ostensibly belonging to a faction of the OPA, which in turn is now controlled by Inaros, they’re not too enamoured with the lack of bounty his leadership has brought and long for a return to the days of honest piracy, seeming to sow the seeds of rebellion. Since Inaros generally keeps his military in line through fear and intimidation, it’s not unreasonable to assume that many leaders and captains would gladly put an end to his tyrannical rule and replace him with someone less inclined to reign in their wanton thievery and smuggling.

Back through the Ring Gate on Laconia, I may have been a little hasty last week in my prediction that relating the events of the Strange Dogs novella was heralding the incorporation of events of future novels. Rather, the next brief chunk of story, Cara telling her parents what she saw and attempting to save the alien creatures, is instead likely setting the series up for a future revival after its planned conclusion, which given the decades-long time skip between Babylon’s Ashes and Persepolis Rising could take place at any point if and when it actually does. As such, even though The Expanse is being brought to a conclusion, it’s still looking to the future. 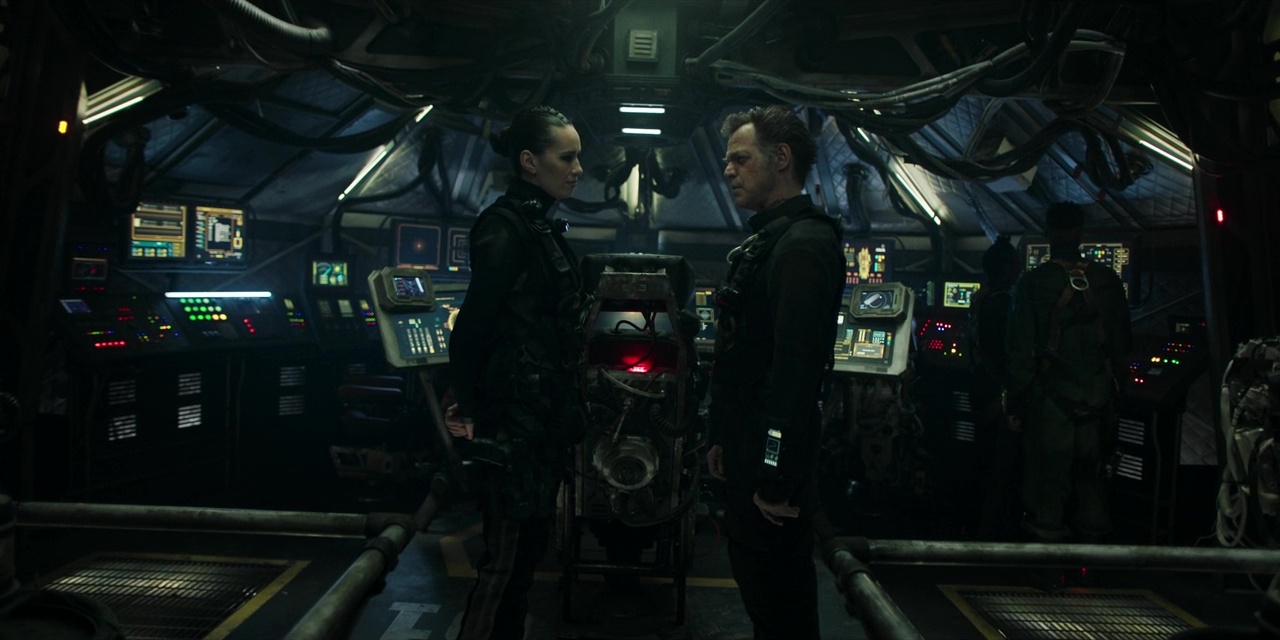 “Azure Dragon” only gradually advances things towards a final conclusion, but it’s nevertheless more engrossing with every passing moment. Its deft balance between action and story holds things together, while numerous character moments continue to remind us why the series’ wide ensemble is so compelling.