After a character-heavy opening of season 5, The Expanse shifts gears into an action-oriented chapter as a revolutionary killer’s plan of fear and destruction is put into motion.

The bulk of my last review was built on The Expanse generally being heavily geared towards the characterisation of its main players, both central and supporting, but this time things move at a much faster pace as the heroes begin to face the destructive enemy they are up against.

After saying goodbye to Baltimore, Amos travels to a high-security subterranean prison to visit Clarissa Mao (Nadine Nicole), now serving a life sentence for organising a terrorist attack in season 3 and attempting to frame Holden for it due to her lingering daddy issues. The intent is to juxtapose the two inherently violent people and contrast their current situations: Amos with a steady job, a crew held together by mutual trust and respect, and a life that is his own where he is answerable to nobody, whereas Clarissa exists in restrained and drugged-up isolation where merely being allowed to get up and walk is the highlight of her day, everything she was, is and ever will be reduced to a name on an inmate registry.

In Clarissa, Amos sees the unrestrained sociopath he could have become without Lydia’s guidance as a child, a perspective hammered home to him after his return home and its stark reminder of everything he endured and escaped from after taking his life into his own hands and killing the original Amos Burton. He most likely also wonders if he would have ended up in a place like this had he not had his friends around him to temper and channel his worst impulses. Unfortunately, any deep introspection is cut short by an attack of another of Inaros’ meteors impacting the planet. Similarly, Alex and Bobbie in their pursuit of the ship Babbage is on to further their hunt for the arms dealers is cut off after the attack and all other considerations are rendered temporarily moot and anything they might have done is paused for now.

Avasarala is proved right about her warnings about Inaros, only too late receiving proof and the petty vindictiveness of politics preventing her from getting the information to her UN successor Nancy Gao (Lily Gao). Such was the sudden nature of the attack, she doesn’t even have time to consider that had events not transpired as they did to land her in her current position, it would probably have been her on Gao’s plane… space shuttle… thing… and consequently the one blasted out of the sky by the shockwave of a meteor impact. Gao’s presumable death will doubtless pave the way for Avasarala’s re-ascension to power since the rest of Earth’s government will probably be adopting standard headless chicken protocol, putting her directly in the firing line for responsibility of meeting a threat she was the only one actively attempting to prevent. 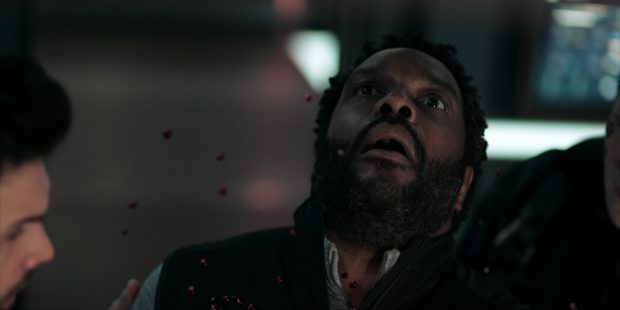 We as an audience are so jaded to the tropes of disaster movies that it’s nigh impossible to dismiss knowledge of them when there is a word-threatening event going on, especially one as familiar as a rogue meter strike. However, the series craftily played out the structure of such stories in the previous episode without us realising, with the investigation into what was going on and all the rushing around to prevent disaster being seamlessly incorporated into the character-driven narrative, so by the time everything was revealed, it had become a completely different story.

Instead, this one plays out in the aftermath of the meteor strike, focusing on the shock, confusion and loss just experienced. There’s barely even any time to take stock, as treachery in the ranks of Tycho Station personnel is revealed and Fred is shot in the back by the mechanic Sakai (Bahia Watson). He has always been such an indomitable presence in the series, that he could be taken out by a simple act of betrayal seems anticlimactic, but his death is only one of millions of others that went unseen on the surfaces of Earth and Mars, vast hemispheres of flame blooming into the sky the only concession to marking their demise.

Given the number of ways the characters deal with the weightlessness of space and are able to move themselves normally it can sometimes be a little jarring when we are given a reminder of the existence of zero gravity, which has most often been acts of violence. Drops of Fred’s blood remaining in the air remind us of the lack of downward force, and refuse to fall as though floating in silent acknowledgement of the shock just experienced. 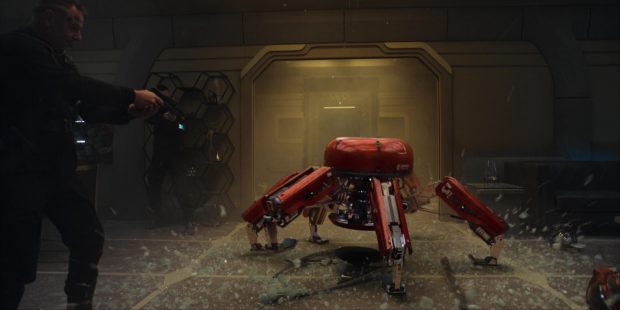 Even a high-tech world still has a few surprises

The following battle as Inaros’ forces invade the station to steal the protomolecule is fast and brutal, especially when some kind of crimson metal tarantula bot comes to rip open the alien substance’s hiding place. It’s as overtly sci-fi as things have gotten so far this season, and the look of bemused incomprehension on Holden’s face suggests it was intended as an utterly surreal encounter, and makes you wonder what other contraptions Inaros has at his disposal.

Exactly how Monica fits into everything is still not clear, since it’s retrospectively apparent from Sakai’s betrayal that the reporter was part of a Xanatos Gambit to set up the ambush of Inaros’ forces coming to steal the protomolecule from Tycho Station, but exactly why there was a secondary plan to abduct her after the theft doesn’t add up, since her usefulness would have presumably ended at that point. Perhaps Inaros wants someone skilled at manipulating media perception to rework how people view him, although after actively murdering millions of people in the name of social liberation, how he is thought of by either side is unlikely to be altered by a couple of one-to-one interviews.

When orbital defences are re-tasked to deal with the remaining bombardment, there is a sigh of relief rather than a rousing cheer like you’d have in a Hollywood actioner, as people would still be too emotionally stunned to express any elation. This is where the theoretical movie would actually end, but with Inaros now in possession of the final sample of the protomolecule, it’s actually the point where things begin to get serious. 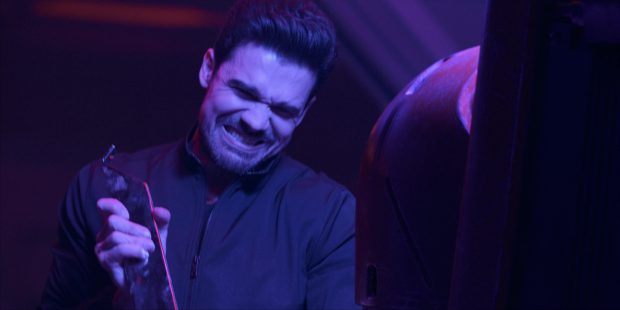 Sometimes you don’t have time to pick your battles

As for the man himself, he finally makes a proper appearance when Filip brings Naomi to him like some kind of hunting trophy, and is as predictably presumptuous about how she should feel about seeing him again. So deluded is he over his personal victory he genuinely believes she would be happy rather than repulsed by his actions, and doubtless assumes that enough reiteration of his revolutionary rhetoric will convince her to join him without coercion.

His philosophies also come out more clearly, declaring a belief that strength is making others fear you and blaming his claimed retribution on the past crimes of Earth and Mars. His declaration of “We are free” is unlikely to prove in any way accurate, as humanity’s two pre-eminent superpowers are not going to cower in fear over the actions of one ruthless madman, fear of the protomolecule repurposed as a planetkiller weapon or not. Some will question the veracity of his claims, others will point out that one man can wield little true power, and there will probably be some conspiracy theorists claiming a false flag operation intended to justify military action against the Belt and its populace.

Natives of the two Solar System planets will turn against their Belter colleagues either in mistrust for their cultural association with the man who orchestrated the deaths, or kill random Belters they encounter in proxy retaliation, because one of the main points of this series has always been that humanity remains the absolute worst no matter how technologically advanced we become. 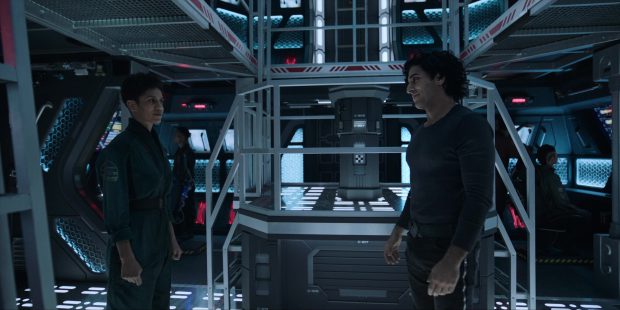 However, it’s entirely possible Inaros already knows all of this and doesn’t care. If he is willing to commit mass murder on a global scale, then sacrificing some of his own people for the cause, or the greater good, or however he wants to see it, will be perfectly justified in his eyes. Like many people full of their own sense of self-importance, he is blind to his own hypocrisy, unironically talking about a “better path” after indiscriminately murdering millions of people, and tacitly claiming that a path of growth and advancement can be built of a foundation of blood.

In case you’re wondering, the episode title is named for the Battle of Gaugamela, where Alexander the Great won a decisive victory against the army of the Persian king Darius III. Even though Darius’ military might greatly outnumbered Alexander’s Hellenic League, the Greek warlord’s greater tactical planning and shrewd use of his forces led to a decisive victory that began the downfall of the Achaemenid Empire. The reference’s relevance comes from the forces at Inaros’ command being a tiny fraction of those at the disposal of Earth and Mars, his judicious use of what was available allowing him to launch a devastating attack against powers much greater than himself, and in doing so intends to cut off the empire of each of the planets and claim the vast regions of space, along with its vast resources, for the Belt and its people.

Inaros sees himself as such a visionary it’s not out of the realms of possibility that the comparison has occurred to him, although whether he will go on to weep when there are no more worlds to conquer or be taken out before he can do even more damage to the fragile peace that exists within the Solar System remains to be seen. 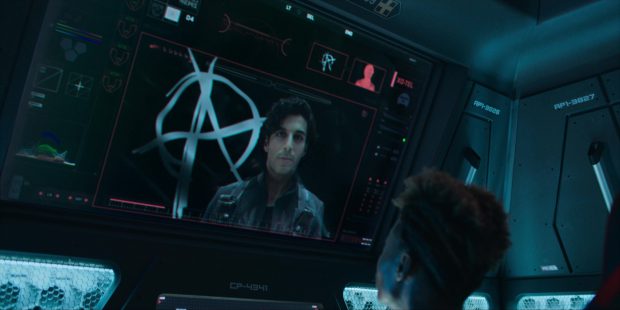 “Gaugamela” runs at a much faster pace than the opening salvo of episodes and launches us right into the series’ main event. Although characterisation takes a back seat to action, it’s still just as engaging, focusing on the human aspect of the tragedy rather than blood and explosions. With Inaros now declaring his intentions, the next challenge will be to figure out how to defeat someone with no compunction about killing anyone he feels is a threat to his cause.