The Expanse continues its build up to the season finale with another fairly sedate episode continuing events in a holding pattern, while also continuing to put one character in particular through the wringer.

After the emotional intensity of the last episode, this time the focus is more evenly spread out among the various characters, each of whom solidly asserts their current place in the ongoing story, as well as offering tacit suggestions of what kind of a part they will play as the narrative comes to a conclusion.

After an unfortunate absence last episode, Amos and Clarissa make a welcome reappearance, returning to Baltimore to seek Erich’s help in getting off Earth. Along with discovering the covered bodies of a group of elderly people left outside their nursing home, the human cost of the meteor attack is again spelled out not in numbers, but rather the innocent lives pointlessly and needlessly snuffed out in service to a madman’s vision of glory. It also serves as an indicator that life on Earth will continue to get worse before it inproves, and as such a situation will likely induce the pair’s baser impulses to come to the surface, it’s not on they want to remain in.

The pair find Baltimore even more of a wasteland than previously, now being partially submerged from coastal defences failing in the attack damage, and is likely a situation repeated the world over where the impacts were felt the worst. Even so, it’s easy to see why Erich is reluctant to abandon the city. He’s someone who has spent his life scrabbling for a sustainable place in a decaying world, and when he’s finally risen to the top everything that allows the fractured society to at least partially remain functioning has been demolished, leaving all that he fought for effectively meaningless.

As far as Amos is concerned, threats are typically things he can either ignore or address immediately and get the results of the posturing out of the way. Since he didn’t ever expect to come back to his hometown, Erich’s warning that he shouldn’t ever again darken the corners of the gangster’s empire was immediately disregarded as unimportant. He views life and its hardships through a spectrum of unshakable pragmatism, and speaks in simple statements of fact that if people choose to ignore it’s on them, so sometimes his engagement with people can be somewhat terse and lacking in practicality, which is exactly why having Clarissa along with him has proven useful.

The two extremes of Clarissa’s life are brought into stark contrast by her convincing Erich to listen to her, telling of places where the obscenely wealthy keep holiday homes and shuttles capable of leaving the planet, contrasted against a story about the madness of a fellow inmate who murdered her children. It demonstrates the extremes of life she has experienced in a short space of time, and in the process eloquently defies Erich’s dismissal of her as a poor little rich girl.

Out in space, Drummer makes another appearance, now reduced to scavenging the drifting debris that was the ships of Inaros’ detractors. Having been pressed into joining the Free Navy, the uncertainty of how loyal the crew are supposed to be to their new master and commander is clearly becoming an increasing cause of contention among them. They’re essentially all one big family, and when you’re close to people it becomes that much easier for your words to cut them. However, the converse is also true, and a daft moment of water being sprayed in zero-G leading to them sucking up the floating droplets is all it takes to briefly break the tension, only for it to pass just as quickly and the reality of the situation they’re in sinking back in.

It remains to be seen if Drummer’s trepidation over angering Inaros will trump her contempt for Inaros’ henchwoman Karal (Olunike Adeliyi), or if she’ll end up killing the glorified lackey in the absence of anyone else on whom she can take out her anger. It’s not entirely clear how Drummer, the ship and its crew will fit into the grand scheme of things aside from being an additional ship in the force eventually mustered to battle Inaros, but that they’ve periodically returned suggests some featured part is planned for them. 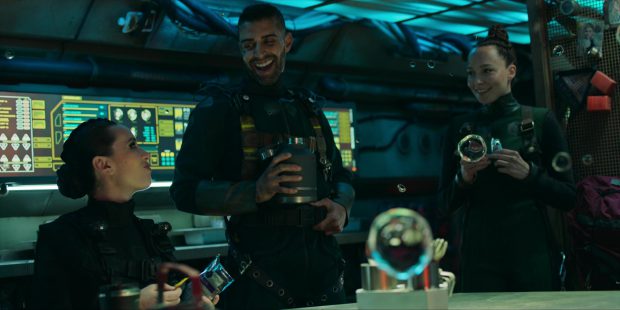 A moment of levity

Also among the stars are Holden and his temporary replacement crew searching the wreckage of the Zmeya for any trace of the protomolecule, and when they find none conclude it was completely obliterated in the blast. This reiterates the issue mentioned last time of the unlikelihood of such an occurrence actually coming to pass, especially when Inaros intended for its Damoclesian threat to keep Earth and Mars at bay. Okay, the plan was for Inaros to kill Holden by luring them to a ship rigged to explode, but there’s no guarantee Holden wouldn’t have informed someone of the protomolecule’s apparent destruction. Either way, the one thing with which Inaros had to threaten the Inner Planets is gone, meaning there would be nothing to prevent them from launching the full-scale counterstrike that his having the glowing blue weirdness was intended to prevent.

Even absent of such a supposed development, military wheels are in motion back on Earth. Paster (Sugith Varughese), the current UN secretary general, makes his first real appearance after his introduction, and for someone who claims that he didn’t want the position, it turns out he’s quite an orator. His speech attempts to appeal to the best of humanity, talking of rebuilding and togetherness than vengeance and retribution, but this is unfortunately followed up by a reminder of one of The Expanse’s core tenets, that humanity as a species utterly sucks., and the danger of this being proved in violent and explosive ways is ever present.

As predicted in an earlier writeup, reprisals are being planned as though the entire Belt was complicit in the attack on Earth, rather than the perpetrators being merely a radical faction of a separatist movement. There is a habit of military leaders to see everyone even tangentially associated with an enemy as being part of their forces, not just in the typically presented way of their genuinely believing it, but also because they have to tell themselves such so they can live with the awful things they feel must be done in the name of bringing hostilities to a close with the enemy defeated. A knowing glance between Avasarala and Admiral Delgado (Michael Irby) silently agrees that for all Porter’s attempts to appear in command, it’s only a matter of time before he ends up being steamrolled by the military into authorising what they want, further escalating tensions and resulting in even more innocent people dying. 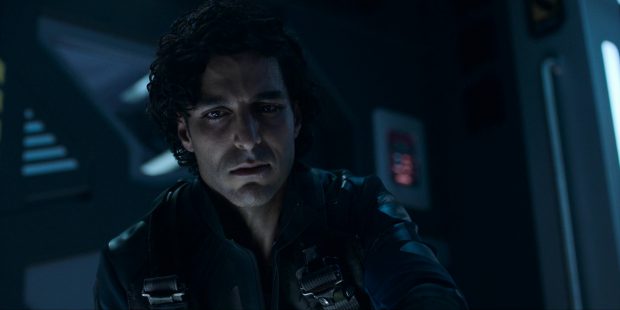 Even villains have emotions

However, this week’s main event is once again centred around Naomi, but this time she’s completely alone since the only Inaros/Filip scene is the terrorist blaming his son for Cyn’s death in the suffocating vacuum of Naomi’s escape to keep the boy further dependent on the good graces of his father.

Most people, when finding themselves alone aboard a disabled spaceship wired to detonate would simply give up, but after carrying out an escape that only had a fraction of a chance of resulting in her survival, Naomi is not about to surrender at the next hurdle. Because every decision in this show has to be made in within the confines of an urgent timelock, she discovers a faked distress call from herself intending to lure the Rocinante into a trap, and spends her time trying to overcome it.

As well as someone often acting as the heart of the show, Naomi is also an engineer and mechanic of no small talent, first managing to jury-rig a new transmission from a spacesuit helmet, then when that fails to send searches for the source of the bait message with only a spacesuit absent of any air supply. Each foray into the vacuum-sealed corridors of the ship takes Naomi longer, and is probably doing her some brain damage in the process. 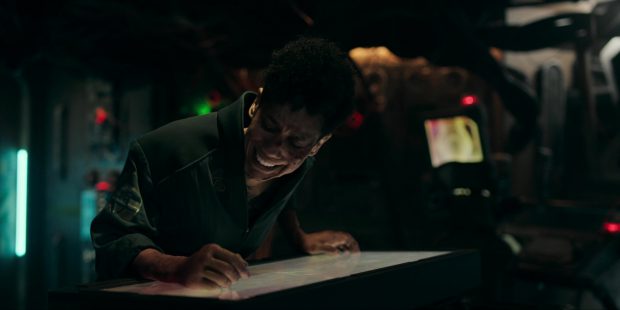 One problem after another

At first, it’s not clear exactly what she’s trying to do. It at first seems like she plans to simply stop the transmission, but that of course couldn’t account for people, perhaps even Holden, having heard the message and already being on their way to search for her. Nor is it clear why she keeps repeating the words of the message to herself like some manta of self-flagellation pushing her along her attempts.

Only when she achieves her end goal is it made clear, ingeniously and judiciously short circuiting the transmitting message to subtly change its meaning and hope that people pick up on the nuance. How she will actually proceed from here is anyone’s guess, but Naomi has always been the kind of person who will put herself in dangerous situations to protect people she cares about, case in point her attempts to find Filip, since she must have known of the risk of Inaros finding out and taking extreme exception to it. Having done all she can to warn Holden of the danger, her immediate objective is complete, and the notion of her own survival is something she will think about when she has the mental headspace to actually do so.

For an actor, portraying a character isn’t just about saying lines; inhabiting them is just as much about how they move and react, and it can be a challenge when they have nobody with whom they can play off against by speaking their thoughts and feelings. All that Dominique Tipper has to verbally work with is a series of increasingly despondent expletives, but Naomi’s mounting desperation over being used as bait for a death trap is consistently apparent in her expressions, as is the despair that threatens to break her resolve to find a solution as each part of the problem presents itself, each of which is augmented by the ever-growing sheen of grimy sweat on her face and darkening of pressure-burst blood vessels around her temple. Tipper has elevated her performance to another level this season, and this episode only further proves what an invaluable contribution her presence is to the show. 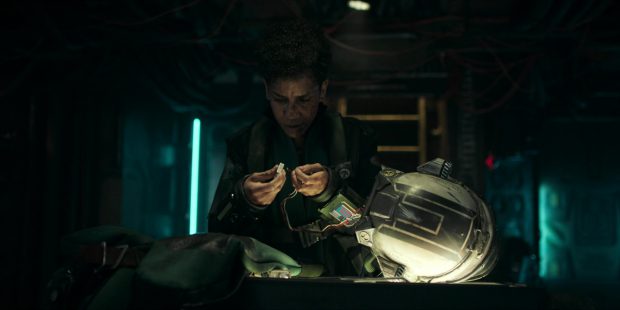 “Hard Vacuum” is another episode that, aside from Naomi’s increasingly desperate forays into the titular oxygen-deprived corridors, largely consists of reactions to previous events and setups for ones to come. However, things are now coming to a head so even the smallest events are becoming more engaging, increasing the tension as the story builds to a climax.