Season 5 of The Expanse comes to a close with as much action and emotion as has been seen throughout, while also setting things up for events to explode into its sixth and final outing.

Generally speaking, individual seasons of the series have largely been a single story in and of themselves, while also serving a larger narrative surrounding the emergence of the protomolecule and humanity’s tentative steps into the wider universe. This one is a little different due to the novels Nemesis Games and Babylon’s Ashes forming a duology of sorts, and as such at the conclusion the current plotline is far from over. 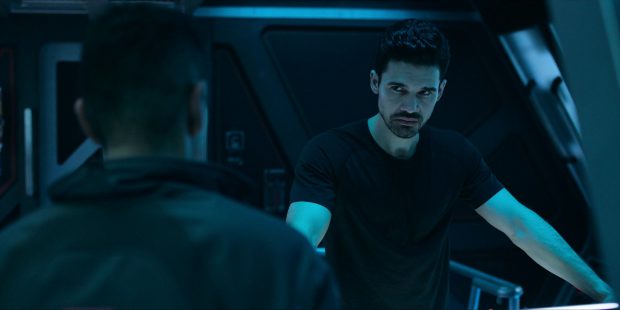 After spending most of the season being completely reactionary and largely ineffectual, Holden finally gets something to do, after realising Inaros’ ships are ready to intercept them on their mission to rescue Naomi. Ever the noble and at times overdramatic hero, he opts to engage the vessels in the Rocinante while Alex and Bobbie burn off in the Razorback, his stoic declaration of holding off the attackers as long as he can a clear acceptance of the unlikelihood of making it out alive.

To be honest, they probably wouldn’t have had Drummer not chosen that exact moment to take back control of the Tynan from Karal and turn its weapons against Inaros’ ships to provide a decisive advantage. Taking out the vessels was probably as much catharsis for how she and her crew have been treated as it was taking a stand and aiding in saving probably the only person still alive and not on the ship who she actually cares about. It was surprising that Michio was the one to kill the obnoxious Karal rather than Drummer herself, and signifies her acceptance of the path Drummer has put them on by turning against Inaros, even if she doesn’t agree it to be the best course of action. It may have also been a brief concession to her featured role in the novel being given to Drummer for the adaptation, so returns at least one significant moment to her.

I’ve mentioned a few times the lack of action in comparison to previous seasons, and for those who have been bemoaning its absence, the intense space battle more than makes up for it, the soaring arcs of glowing artillery fire tracing across black space and the glow of missile engines lighting up the void as they burn unerringly towards their targets and exploding in mini supernovae of azure fire. It’s a gripping sequence of dramatic shots and spectacular effects, while the ballistics play into real-world physics that sets the action apart from much of sci-fi that tends to ignore it for expediency. 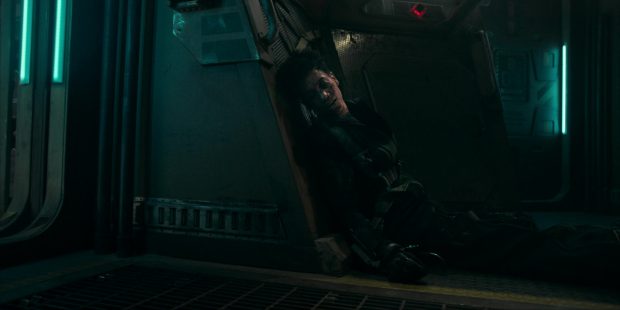 Pushed to her limit

When Naomi’s makeshift HUD shows the Razorback inching ever closer to an explosive demise, she continues her flagellations of desperation. Bashing at pipes, she eventually knocks pressure loose to activate a thruster and send the ship into a spin to make the approach more treacherous. Her path of never receiving a moment’s break continues, and even though now so weak she can barely stand, after hearing Alex’s transmission of their approach, does the only thing she still can to alert them to the threat they are blindly soaring into, and ejects herself into space knowing that this time there is no chance of her survival, but hoping the Belter hand gestures she makes will be seen and relate the danger, her final sacrifice offering her a glimmer of hope that she might save the lives of her friends.

Such a central character being in genuine mortal danger isn’t something you often see, and the increasingly urgent warning bleeps of her swiftly depleting air supply and a single tear escaping into zero-g followed by a gentle fade to black suggests that she is slowly passing out and her already oxygen-starved brain will soon completely shut down for the final time. The extreme close up of her face as she spins helplessly in space shows the ordeal from her perspective, unsure as we are of exactly what’s happening from the limited visual perspective, only faintly making out the muted voice of Bobby as the former soldier hands her a literal lifeline.

The whole season has for Naomi has been an arc of her implacable determination to see a task through to its end, but the previous two episodes have gone above and beyond to portray her refusal to give in to despair and do all she can to protect those she cares about, even at the cost of her own life, and has been equal parts compelling and heartbreaking to watch. 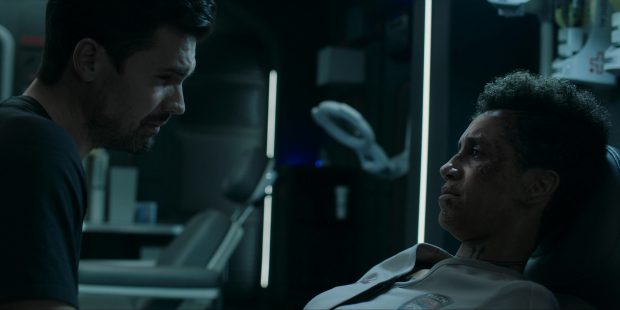 Depending on your knowledge of outside circumstances, Alex’s death from a stroke induced by the hard burn to reach Naomi comes as either a genuine and tragic shock, or something that fits with how the production will move forwards in the wake of the slew of allegations of against actor Cas Anvar. It’s unclear if it was always the plan to depart from the books and kill off Alex to create some lasting consequence of the war the core characters have been thrust into or if it some reshoots were undertaken to permanently write him out – official word has been distinctly cagey on the matter – but his passing fits with the notion of self-sacrifice the series has espoused, even if the performance is now irrevocably tainted by association, and was certainly a more significant sendoff than his dying off screen between seasons or being unceremoniously ditched in some other way. For viewers unfamiliar with what happened it was certainly sudden, but not so much that it seemed jarring.

The lingering issue of Naomi’s “In case something goes wrong” message to Holden is finally resolved, and transpires it was left hanging due to the revelation of its contents only now being of maximum emotional impact, telling him of the happiness of the makeshift family they formed, and to not grieve but go on without her. It demonstrates that even when heading off on a personal mission she knew the potential danger of, she was still thinking of those she has become closer to than anyone.

A similar issue comes up with Drummer’s crew, as Inaros makes good on the implied threat and executes Serge in response to her betrayal. The crew are just as much of a family as well as being polyamorous lovers, and just because we haven’t spent as much time with them or they themselves haven’t been together as long doesn’t make the loss any less significant, and the fragmenting of the crew in response to Drummer clearly having accepted such a retaliation feels wholly appropriate and believable.

Despite this, you can understand her decision. It wasn’t about putting Naomi’s life above those of her crew, but choosing to take a stand against Inaros’ tyranny towards those he purports to be allied with. Accepting his dominion would have been to put herself and those she cares about permanently in his thrall, and that was a situation she refuses to accept. From Inaros’ perspective, it also sends a message about the price of betrayal to the others still under his command, cementing his control by demonstrating his willingness to summarily execute anyone in the name of military obedience.

The season’s main event ends with Naomi’s rescue rather than a battle with Inaros, and the extended coda sees, as predicted, Avasarala back in power following a coup against the incompetent Paster and the inter-culture unity of the Rocinante lauded as representative of what humanity should strive for. In a less serious moment, Amos beautifully manipulates Holden by using their personal history to get him to unknowingly agree to Clarissa joining the crew, setting up an interesting dynamic as they work with someone who previously tried to kill them, summed up by Holden’s hilarious look of utter bemusement as he tries to silently process what the hell just happened.

Celebrations are short-lived, however, as Inaros attacks the ships guarding the Ring Gate, and aided by the firepower of Medina Station, gains control of the wormhole network. This will give him a significant advantage going forwards as any opposing forces will be unable to enter Ring space, setting the warlord up as the de facto controller of interstellar travel. Although at the end of the novel Nemesis Games, from which this season was largely adapted, the battle against Inaros isn’t over, the way events of the series haven’t always exactly followed the books led me to believe that he might be dealt with this time around. It may have just been wishful thinking on my part to hope I wouldn’t have to put up with his smug smirking longer than necessary, and being such a personal preference I can’t hold it against the episode as an objective creative issue.

Also dealt with is the unspoken yet lingering issue of the protomolecule, which it transpires was ejected from the Zmeya prior to the ship’s self-destruction, hidden in a barrage of missiles and now taken to a distant extrasolar planet where rogue Martian military are attempting to use it to weaponise the infrastructure left behind by the Ring Builders and kickstart their new world of militaristic might. I’ve mentioned previously how frustrating was the lack of mention of the fate of the alien substance, and like Naomi’s message is only brought back up now that it’s narratively pertinent, but the big plans for it are going to be epic to see realised on screen.

Finally, we check back in with the treacherous Sauveterre and Babbage aboard the Barkeith, whose attempt to travel through the Ring Gate is met with a time stop and a swirling red mist like that seen by Evie in the last season on Ilus, resulting in the ship being torn from existence. This doubtless signifies that the Unknown Aggressors, the mysterious alien force that destroyed the empire of the Ring Builders two billion years previously, are now fully aware of the new presence using the ancient technology, and will provide the greatest danger yet faced by anyone through the entire series. 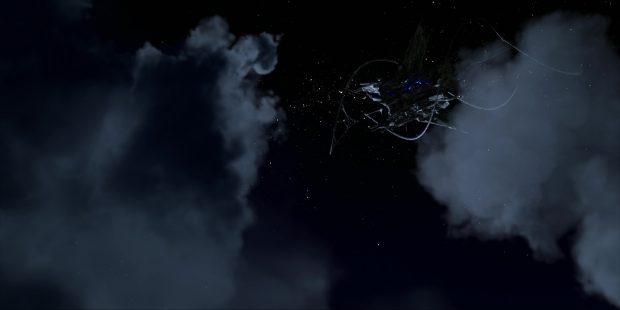 “Nemesis Games” is everything viewers have come to expect of The Expanse, featuring intrigue, excitement, peril, loss, sacrifice, and the loyalty of people willing to do anything for one another regardless of the consequences. Although not a conclusion to the current story, it ties up the loose ends of previous events and sets things up for the concluding season to go out with a bang.

Overall, this season of The Expanse has felt like a long precursor to the next one, establishing the moving parts for the full-scale conflict about to break out across the wormhole-spanning galaxy. Its focus on humanity, both our compassion that forms the best of us and the violent selfishness we are forever unable to move past, espouses both the good and bad of what makes us human, which when it comes down to it is what the best kind of sci-fi is always ultimately about.