The Expanse concludes its build up to the series finale that sees people reflect on how they hope to end the escalating conflict, along with everything that brought them there.

In addition to compelling action and character studies, The Expanse has also delved into discussions of ethics, both as further facets of developing its wide ensemble and in a general sense of the base drives of humanity. My predictions on the direction this final season would take have been a little off at times; I proclaimed last week that it would be the final episode where things were at a lull, but this penultimate instalment continues such a pace to give greater focus on where everyone is psychologically as we inexorably inch towards the final confrontation, while exploring the core of the morality that has been at the heart of the series right from its inception. 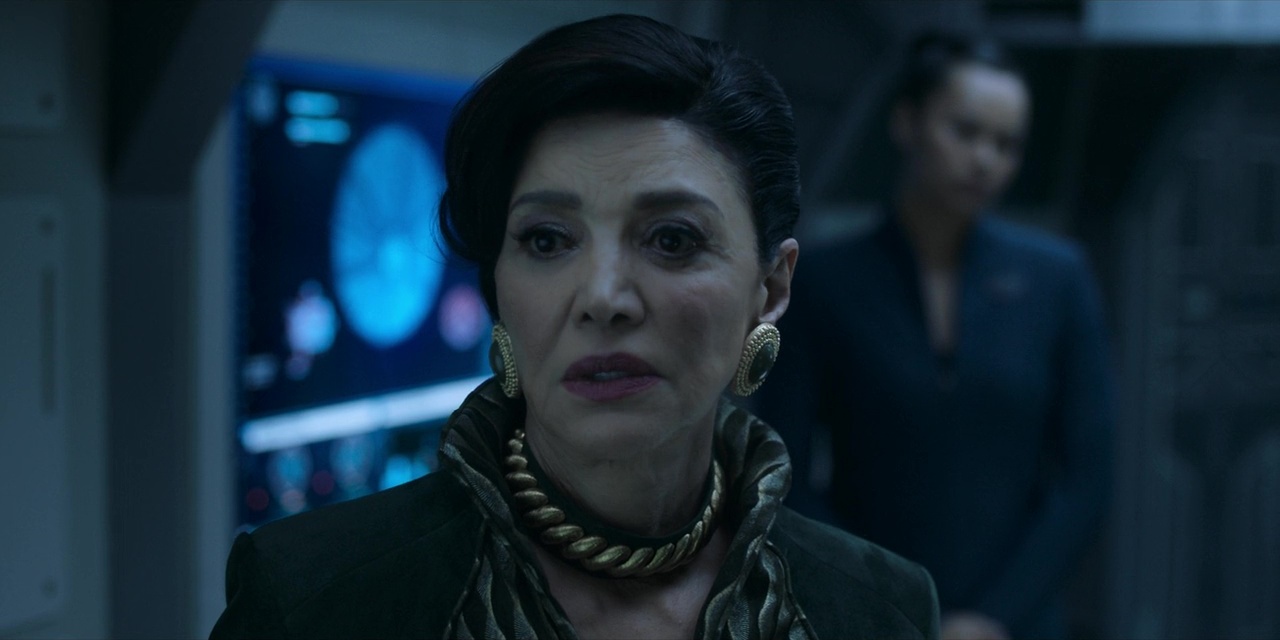 Reflecting on the past

Unlike much of the rest of the season the focus is on Avasarala and Drummer, two characters part of the principal ensemble but haven’t had a great deal to do, something I’ve become increasingly aware of after having comparatively little to say about them in each review.

The only action is the opening sequence of a Martian strike force making a play for Medina, only to be swiftly taken out by gigantic railguns grafted to the surface of the Ring Station. It was an inevitable outcome from a narrative perspective, as winning through nothing but advanced force of arms is an unimaginative way to conclude a conflict, and establishes why such a tactic can’t be used here. It also demonstrates both the power that weaponry infused with the protomolecule can muster and also that an assault against Inaros’ control of the Ring Gate cannot succeed without an enormous loss of life, and as such is a course of action Avasarala won’t sanction.

It would also involve abandoning Ceres and its citizens to starvation and certain death, and thus go against everything she’s trying to convince the Belter populace Earth has become and only confirm what they already believe it to be. Her priority can’t just be winning the war against the Free Navy, but she also has to think about how humanity can progress afterwards, otherwise the resentment driven by the cultural oppression and interplanetary stratification that ignited the current hostilities will only continue to fester and lead to a similar, if not worse conflict. 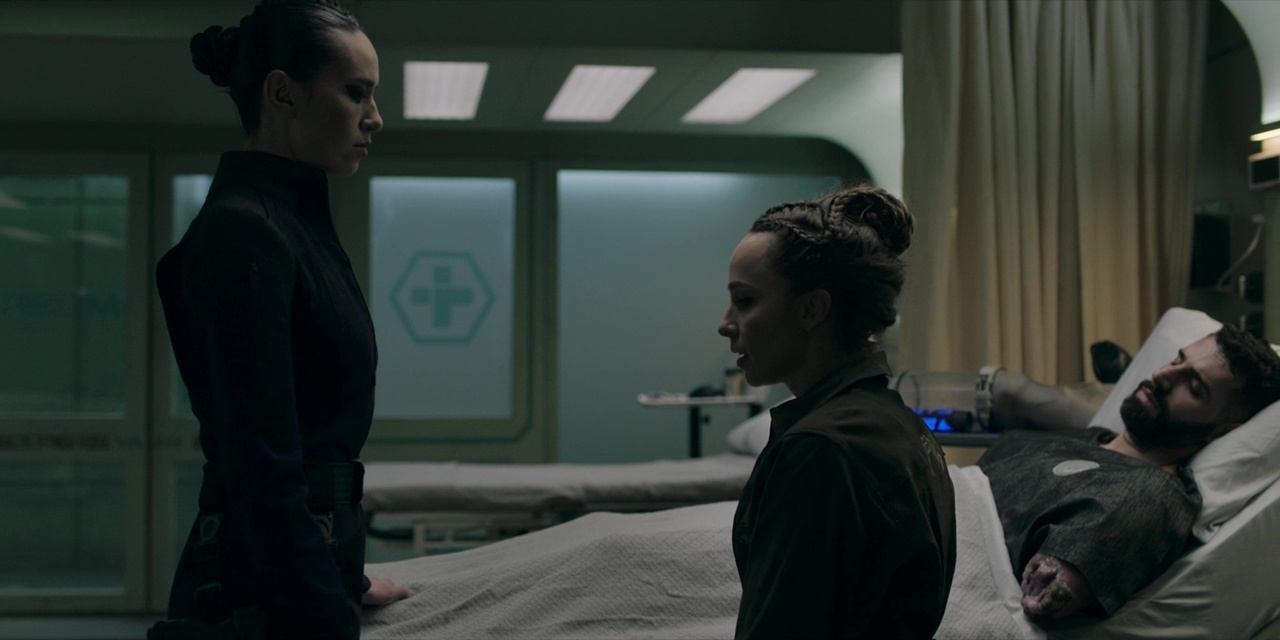 The focal events kick off with Drummer’s arrival on Ceres with supplies looted last episode from Inaros’ deep space stash, only to find herself treated like a criminal suspect by an officious harbourmaster. It’s one thing to be wary of saboteurs, but quite another to wilfully turn away aid offered unconditionally, and Avasarala overriding the transmission to welcome Drummer and her people is a small step towards the two women coming to an understanding.

Avasarala’s other issues include wrangling Monica, dealing with the emergence of the Unknown Aggressors (via a cameo from Elvie Okoye (Lyndie Greenwood), the Ilus biologist from season 4 and one of the few people to have witnessed the actions of the supremely powerful alien beings and lived to talk about it), and convincing Holden to not share the information with Inaros in the hope it would convince him to co-operate. Although she hasn’t had much in-person involvement in the series’ major events she’s still a significant presence, and it seems that one way or another many characters can’t operate without her backing and authorisation.

At one point she’s seen injecting herself with something that tacitly calls back to Bobbie’s earlier comment that she looks tired. That it almost pointedly wasn’t followed up upon means it’s bound to be something far more serious than the basic stimulant she claims it to be, and the truth will doubtless be revealed at the most dramatic juncture possible. It’s understandable why she’s hiding the affliction, since as not only an older person in a high-powered position but also a woman, she can’t show any kind of physical frailty lest it risk undermining people’s trust in her capacity to maintain functional. There’s also a callback to her introductory scene in season 1 that saw a suspected terrorist Belter tortured on her orders, observing that such ruthlessness and callous disregard for Belter life is how she is still perceived, and shows, like many of the series’ characters, just how distant she now is from the person she started out as. 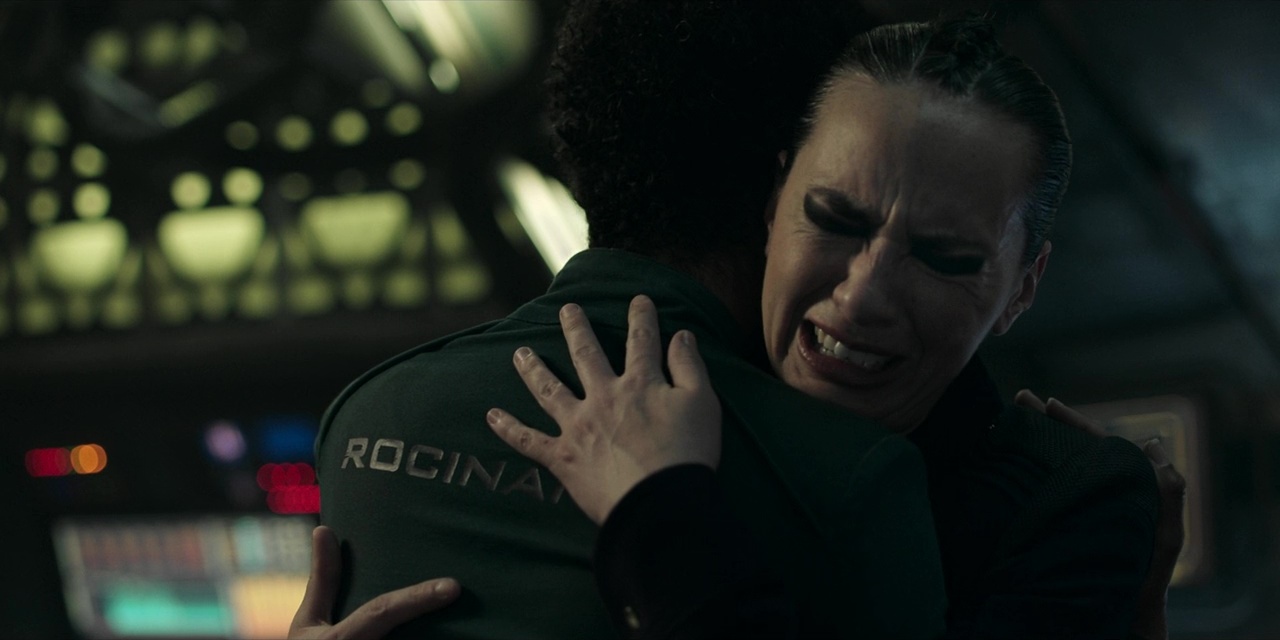 Even stoic warriors can only take so much

Drummer’s side of things sees an interaction with Naomi, their shared history and implied romantic tension that has largely gone unexplored at least being addressed with their in-person convergence. Drummer’s hostility is understandable; from her perspective Naomi has repeatedly chosen the Inners over her Belter heritage, in a further reiteration of the “us and them” mentality that has been the driving force of much of the show’s socio-political themes. The conversation also highlights the duality of Naomi’s identity, seeing her slip into the pseudo-South African accent of the Belter creole, as opposed to the East London inflections of Dominique Tipper’s natural voice when Naomi speaks to anyone else.

As much as Drummer might try to convince people otherwise, she’s only human and subject to the same foibles as the rest of us, but she has for so long projected an air of indomitability you sometimes forget she’s an actual person. She’s also someone who over the course of the last two seasons has gradually lost everyone who meant something to her, and with Michio and Josep staying behind on Ceres she is finally alone. It’s why Naomi’s request to ally with Avasarala and the Inner forces hits her so hard. With Naomi being someone she was once as close to as everyone in her poly family it feels like a betrayal to be asked to go against everything she believes in, while also accepting that it’s the only course of action that makes sense. Her tearful profanity efficiently sums up the dichotomy, and to see her succumb to as close to despair as someone like her is capable demonstrates just how much recent events have affected her.

Outwith the main two, other characters come to important, but less focal revelations. After discovering Tadeo in the brig for contacting Ceres to lean what fate befell his brother, Filip learns the explosives on the station were planted by his father’s own people, showing he was evidently uncaring of the loss of Belter life their detonation would cause. Filip’s belief in Inaros and his cause has fluctuated multiple times since his introduction, but the blatant hypocrisy on display and confirmation that Inaros cares more for his own glory than the lives of those he purports to represent and fight for finally makes the boy unequivocally understand who and what his father truly is, and it might well be the tipping point that pushes him towards finally rejecting the life of aggression and warfare thrust upon him. 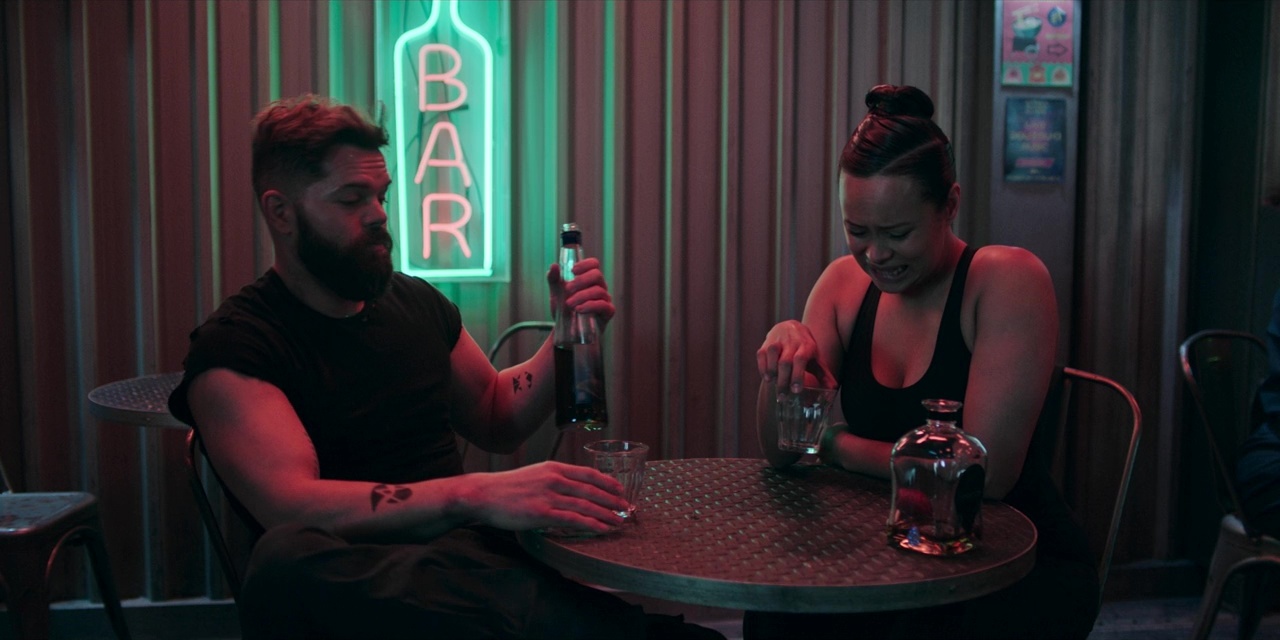 Rest and recuperation and rumination

Amos is still uncertain of the wisdom in continuing to follow Holden after learning of his decision to disarm the missile that would have killed Inaros, and for much of the episode disappears on a bender of drinking and whoring. When Bobbie catches up to him, it’s interesting to note that he tells her the issue was Holden recognising Filip on the enemy ship, as we didn’t see anybody (i.e. Naomi) explain the circumstances to him, meaning he must have figured it out for himself, further suggesting that Amos’ pragmatic thought process and blunt speech mask intelligence greater than he is often given credit for. He’s brought back around by Bobbie’s talk of the different things for which she has stood throughout her life – only one of multiple indirect invocations of the episode’s title – simplifying the ideals until they boil down to simply fighting for the people who stand beside you and have your back, politics, history and personal beliefs becoming irrelevant in the face of basic survival.

The most dramatic moment, naturally, comes right at the end, seeing Avasarala leave the safety of the Zenobia for the first time since arriving on Ceres to meet Drummer in person. She also ditches the boardroom attire in which she’s usually seen for something more causal and in line with the blue-collar society she’s walking into the heart of.

The discussion is, naturally, a tense and terse one, with Drummer defensive and hostile despite Avasarala’s reasoning that Inaros is a threat to them both, and Avasarala accepting of the fact Inaros can’t be defeated without Drummer’s help. All in all, it’s not so much “the enemy of my enemy is my friend” but rather “the enemy of my enemy might be someone whose current priorities align with my own but isn’t someone I can trust to not turn on me the moment said priorities are resolved.” Not as concise, certainly, but far more accurate and nowhere near as reductive. Human nature isn’t driven by a black and white binary where each person exists wholly within one of two sets of rigidly defined and diametrically opposing parameters, but is a mess of contradictions that continue to evolve and fluctuate due to myriad conditions and experiences, and so can’t be expected to remain inflexible and unchanging over the course of a whole lifetime.

Of course, generations of hostility and mistrust can’t instantly be overcome with a single agreement, but there’s certainly worse places to start than each of them being prepared to trust the other, albeit grudgingly, and offers a glimmer of hope that the mistakes of the past might not be repeated. Assuming, of course, they all survive what’s to come. 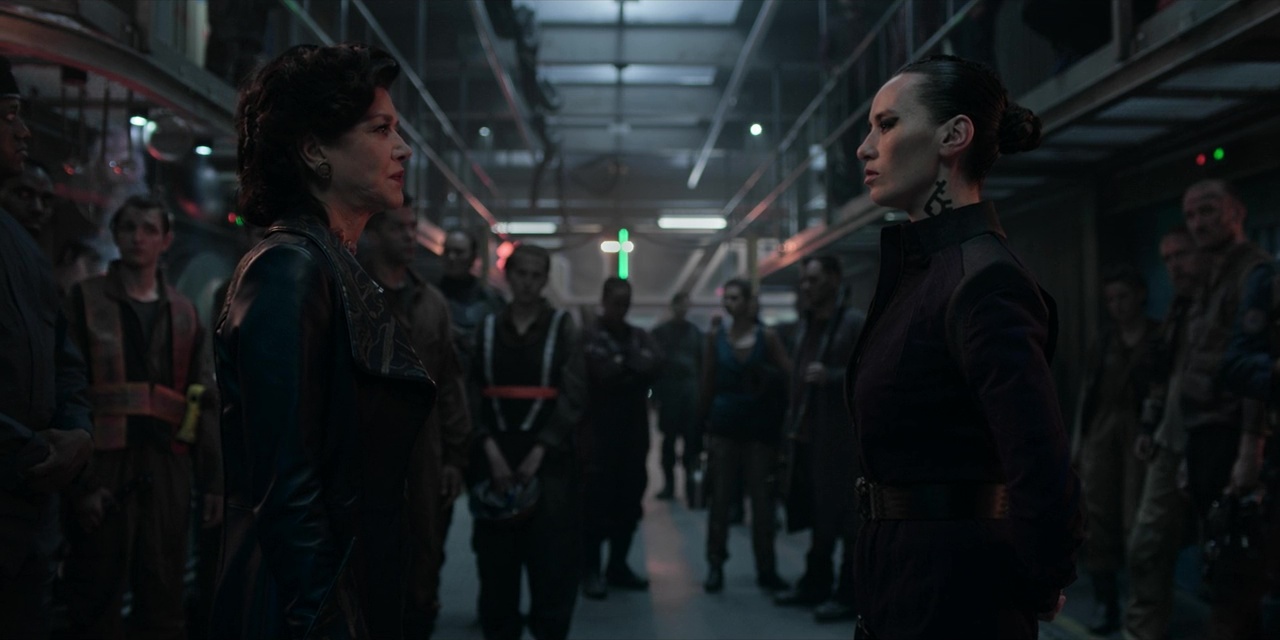 “Why We Fight” brings The Expanse’s character arcs to a point where they won’t interfere with the inevitable intensity of the final episode and puts many of them in positions where they have to truly decide what it is they stand for. Its introspective nature is both a strength and a weakness; taken by themselves the featured events do little to advance the story, but nevertheless neatly set everything up for the series finale where the battle for both the fate of the Solar System and the soul of humanity will be decided.