The Flash introduces a villain from the future who claims to know Savitar’s true identity and offers it in exchange for letting him go.

In every superhero story there will eventually be the impossible choice where the hero can’t possibly make the right one. Abra Kadabra (David Dastmalchian) represents that for Barry and the episode clearly lays out the difficulty of that choice. If Barry lets him go then he will be told Savitar’s identity and will have a better chance of saving Iris. The flip side to that is he would be letting a known murderer walk free just to appease his own selfish desires. 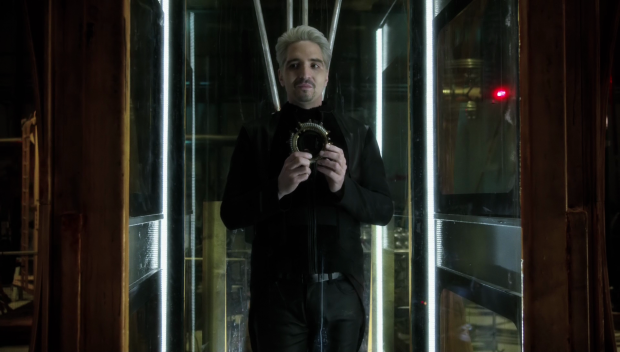 It’s a tough decision to be sure but the episode doesn’t really do anything with it. Barry never seems to be outwardly struggling with the decision despite the fact it should be something that he is wrestling with the entire time. I wonder if he naively assumed that locking Abra Kadabra up in the pipeline would eventually provide the answer that he wanted or if the writers just didn’t know how to make this a significant conflict for Barry.

The only exploration we get of the difficulties Barry is having with the decision is when he talks to Iris about it. He seems content to go along with it at that point and save her life but she gives an impassioned speech about her life not being worth all the lives that Abra Kadabra could take if he’s allowed to go free. It’s fairly predictable but does allow Iris to be somewhat selfless for a change. There is still very little definition to her character but she does sort of work as a sounding board for Barry’s moral conflicts as she is able to deliver the obvious answer.

My issue is that Iris’ speech shouldn’t have been enough to let Barry drop the idea of letting Abra Kadabra go. This decision should have been at the root of the episode and we should have been kept guessing as to what Barry would do. Based on his characterisation this season I could absolutely believe that he would make a selfish decision like that with no thought to the consequences.

Joe is the one that provides the selfish choice when he takes Abra Kadabra up on his offer but is interrupted by Gypsy at exactly the wrong moment. The way this plays out is truly absurd. Abra Kadabra milks the reveal by slowly saying “Savitar is…” before he’s interrupted and it’s utterly ridiculous to watch. It’s like a music talent show increasing tension by drawing out the reveal with awkwardly long pauses. I understand Joe’s point of view on the situation and Jesse L. Martin plays the conviction behind his decision excellently especially when he tells Gypsy that he took an oath to protect his family as well as an oath to uphold the law and his family always takes priority. Joe’s decision comes from a place of compassion and his own selfish needs which makes perfect sense when it happens to be his daughter’s life at stake. His devotion to Iris is further reinforced when he delivers the emotionally charged tale of his irrational fear that he might lose Iris when she was a baby. It was a nice story and it was well delivered. 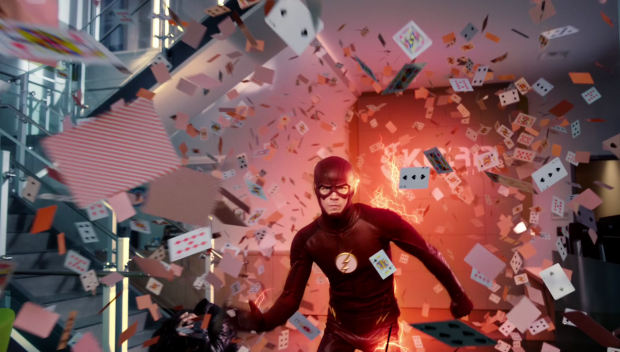 Barry tries his hand at 52 card pick up

The episode should have focused on Joe and Barry’s approach to the decision and emphasised that neither choice was an especially good one. Since they are the closest to Iris then they have the most to lose on a personal level if she died so I’d have liked to see them occupy both sides of the debate. Barry could have been on the side of not letting Abra Kadabra go free for the reasons that Iris laid out and Joe could have been the father figure only interested in saving his daughter. It would have been a clear cut conflict between rational thinking and emotion to help explore the issue but we get none of that.

To make matters worse the reveal never actually comes so the whole debate is for nothing. It wastes a potentially interesting villain by tieing him to the insufferable Savitar plot. Everything about Abra Kadabra is connected to Savitar which prevents him from becoming a proper villain on his own. David Dastmalchian is good fun and chews scenery really well while the visual effects team do a good job of visualising his abilities. There’s a particularly well executed chase sequence involving Barry running up and down buildings in an attempt to catch him. It’s just a pity that Savitar hangs so completely over this show at the moment because it means that everything else is dominated by it.

I do like the approach taken with Abra Kadabra. Having him be a villain from the future who uses technology to simulate magic is a nice idea for this show while also being consistent with the comics. It allows his abilities to be almost magical while still rooted in science in keeping with the general approach this show takes to its villains. The famous Arthur C. Clarke quote “Any sufficiently advanced technology is indistinguishable from magic” is mentioned and it accurately sums up what Abra Kadabra represents. He is someone so far beyond Team Flash in terms of his understanding of science and technology and that makes him a credible threat. Having his tech be outside of the team’s understanding is a bit of a get out clause in terms of fighting him but it works well enough despite the episode barely being about the threat he represents.

A lot of what Abra Kadabra said doesn’t really work as far as threats go. He makes reference to Savitar being Barry’s greatest enemy but we have seen no evidence of that so far and it’s unlikely to develop to that degree in the remaining episodes. Certainly a voice from the future telling us that does absolutely nothing to make it any less unbelievable. I did like the mention of Devoe which suggests that Clifford Devoe aka the Thinker could be the non Speedster villain for season 4. 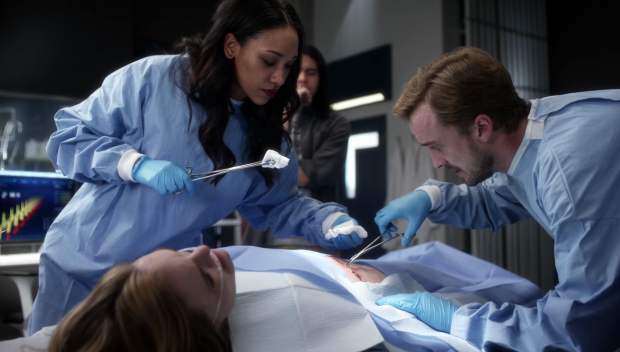 Caitlin assists on her own operation

Gypsy comes back in this episode because she is chasing after Abra Kadabra. She has a personal stake in this one as he was responsible for killing her partner though it doesn’t come across all that well. I used to find Cisco’s flirtateous banter with Gypsy to be endearing but it has gotten to the point where Cisco is coming across as a creep for relentlessly refusing to take no for an anwer. If this becomes a relationship because he harrasses her to the point that she agrees to be with him then that will be really concerning.

Caitlin’s frosty -pun definitely intended- relationship with Julian comes across fairly well. Him being angry with her for lying to him about the Philospher’s Stone and feeling like he was being used makes some sense. It’s mostly enhanced by Tom Felton’s performance and the road to forgiveness feels organic enough. The sequence where Caitlin was assisting on her own surgery while staying awake through the unimaginable pain was impressive and her “death” was a genuine surprise. It looks like Killer Frost will be a significant issue in the coming episodes and I’m more interested in exploring how Team Flash deal with one of their own becoming a villain than anything else this show is doing right now.

Barry’s decision to go to the future as an information gathering exercise just proves that this character is fated to learn absolutely nothing. He has been warned time and time again how dangerous it is to mess with the timeline and has had first hand experience of the issues it can cause yet he continues to make the same mistakes. Going into the future will not go well for him and I dare say that he’ll learn other things to be tortured about so this show and Barry as a character is doing nothing but running in circles.

Another frustrating episode that wasted a potentially worthwhile villain by connecting him to Savitar. Abra Kadabra was fun enough as villains go and lent himself to some impressive visuals but beyond that everything he did and said was about Savitar. In theory presenting Barry with the choice to let a murderer go free in order to save Iris could have been interesting but the episode does very little with it. Joe had the best material within this plot but having this explored with Barry being on the opposite side could have worked well. It’s made worse by the fact that the promise of the reveal goes absolutely nowhere which makes Abra Kadabra feel even more wasted.

Gypsy’s return is problematic as the flirtatious interactions between her and Cisco have altered from endearing to creepy. Cisco is essentially harrrassing her at this point and the whole thing is uncomfortable. Her personal connection to Abra Kadabra could have been more than it ends up being but as presented it’s just a thread that goes nowhere. Caitlin’s troubled relationship with Julian is handled well enough and the road to forgiveness feels organic enough. The scene where Caitlin assists with an operation on herself is particularly impressive and the Killer Frost cliffhanger has me interested in exploring Team Flash dealing with a villain that comes from within. The promise of Barry going to the future only serves as proof that he has learned nothing and the show is going to continue going in circles. 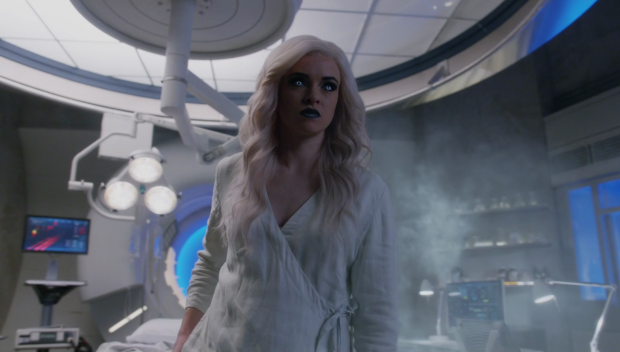 Killer Frost back in action