The Flash returns for an eighth season with the beginnings of a five part crossover of sorts and a new threat to be dealt with.

Crossovers are a tricky business in COVID times but the limitations haven’t stopped the producers of The Flash from having a go. Instead of getting the main cast from every currently airing show together for a celebratory event the approach is to pull in guest starts that have left ongoing shows or come from shows that have finished. Batwoman is also making an appearance somehow. Crossovers are always fun and focusing on secondary characters as the guests is an enticing approach as it provides fodder for different sorts of interactions. 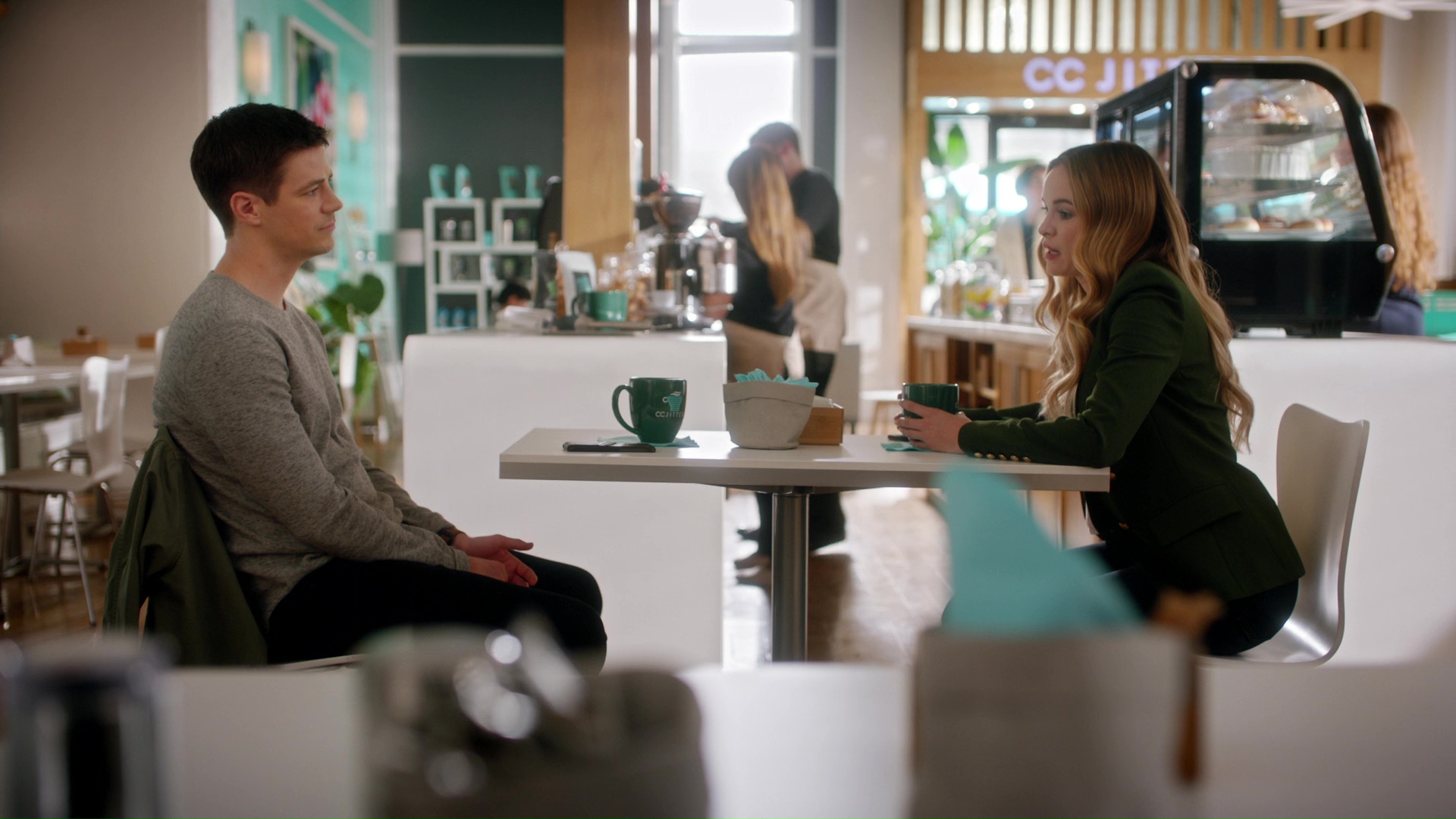 Nice to see some down time

The guest in this episode isn’t quite what could be called a secondary character. Brandon Routh’s Ray Palmer shows up in Central City for a tech conference and to crash with the West-Allens following a past offer of a place to stay if he was ever in town. His introduction in the episode is delightfully awkward with Ray interrupting Barry and Iris having a rare romantic evening. His failure to read the room is amusing and the idea that he didn’t think to call ahead is bizarre but in line with Ray’s eccentric personality.

Ray left DC’s Legends of Tomorrow to support his wife Nora in her role as a Fairy Godmother -if you haven’t seen Legends then explaining it would take too long- and is trying to figure out what his purpose in life is now that he isn’t travelling through time. He is currently attending the conference as a guest speaker but has no plans to get back into the industry and start a business. In many ways he’s adrift as he doesn’t know what to do with his life but seems adamant that he doesn’t want to be juggling responsibilities any more. Chester wrongly assumes that he is attending the conference because he wants to get back in the game and gets himself in a funk when Ray tells him that isn’t the case. As always a setback dents Chester’s self confidence and makes him doubt his ability to do anything right. This is something that is quickly solved by him getting stuck into a problem to solve but Chester’s fragile sense of self belief is an interesting ongoing characteristic.

Over the course of the episode Ray comes to realise that it is possible for him to be a devoted husband, a tech genius and even a part time superhero. Barry helps put him on the path to this realisation by encouraging him to use his skills and intelligence to invent a life that works for him rather than look for something that exists elsewhere. It’s unusually helpful and insightful advice from Barry that allows Ray to consider alternatives to solve this existential conflict for himself. 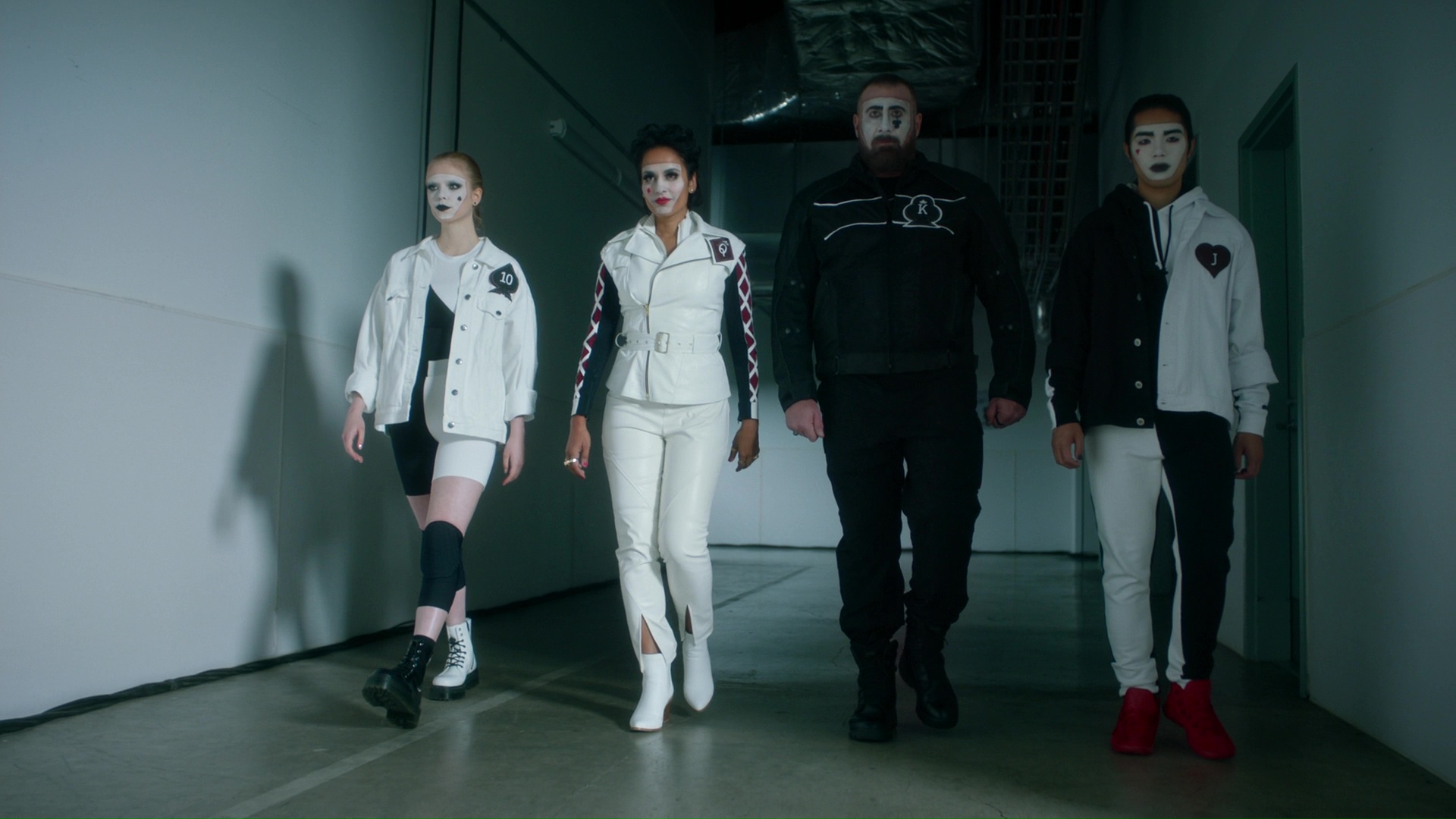 Ray is always an enjoyable presence thanks to Brandon Routh’s effortless charm. It’s unfortunate that his role in this -sort of- crossover has now ended as his continued presence would have certainly been an asset but his role had clear purpose and concluded nicely so at least his appearance was a meaningful one. His contribution to an action sequence was visually impressive and his parting words to Barry about showing the antagonist who he really is helped Barry take a step forward so there was a real neatness to his overall contribution that made his presence essential.

As mentioned Barry is unusually insightful in his conversation with Ray and this extends to the rest of the episode. He appears to be in control of his life with a strong balance between his day job, exploits as the Flash, his friendships and his marriage to Iris. He approaches the Royal Flush gang with calm resolve and takes a measured approach to the looming threat that will plague him throughout this arc. It’s the most character development Barry has received in a long time though it’s unfortunate that it has happened offscreen and it’s unlikely to be permanent given past performance.

It’s great to see Barry as a more measured and confident leader with a semblance of control over his own life reflecting the experience he has gained over the years as the Flash. Notably the episode showcases the characters -including Barry- indulging in some down time and interacting in ways that aren’t designed to prop up an ongoing arc. For the first time in a while they come across as friends who enjoy being around one another and that’s refreshing to see. Barry and Caitlin getting a cup of coffee while Caitlin discusses her willingness to start dating again was a really strong low key scene between two friends. This is something the show has been lacking for a long time so hopefully this represents an intent to feature this more. 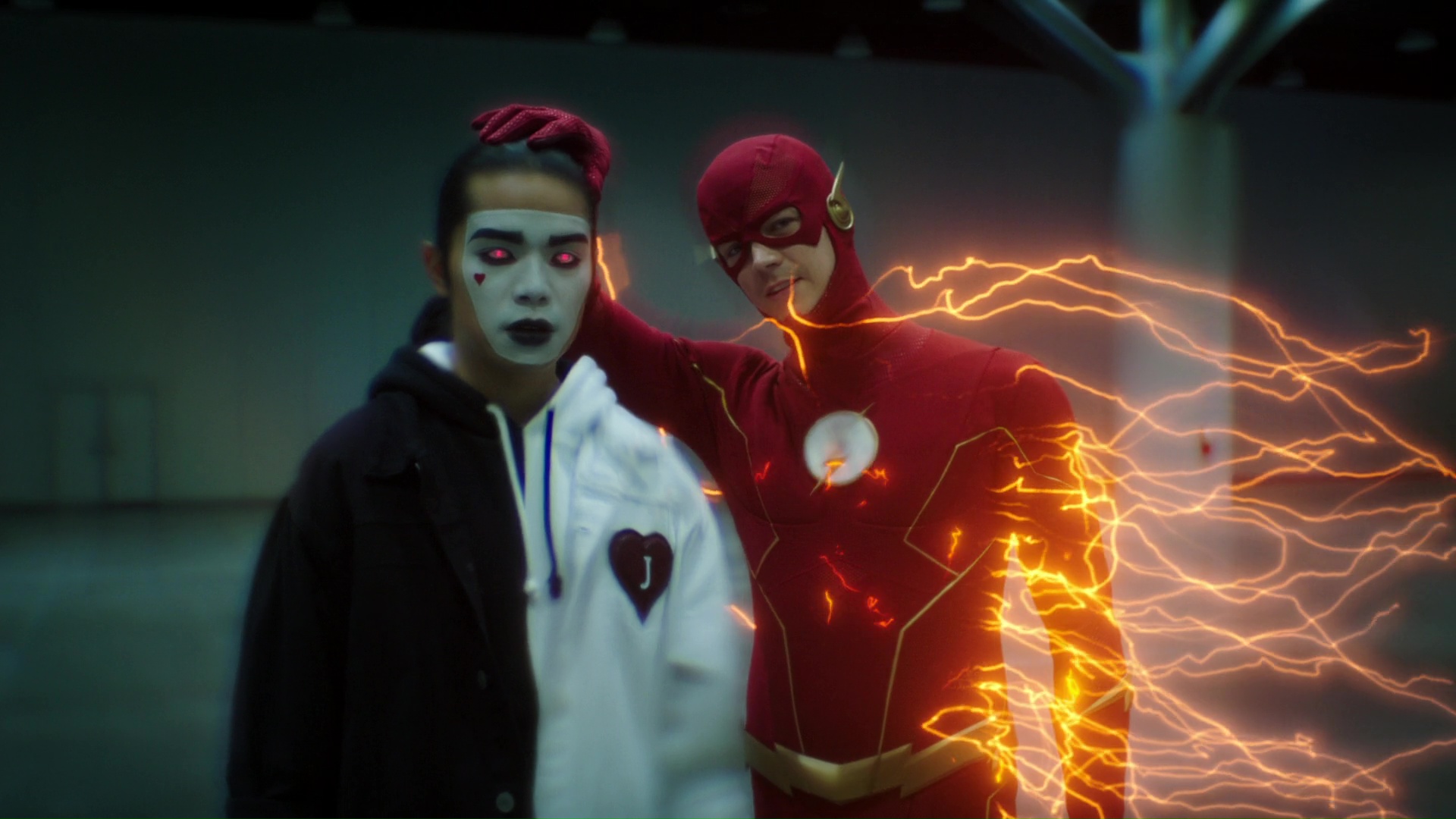 The episode contains a theme that the audience is beaten over the head with repeatedly; that theme is “levelling up” and it touches many of the characters in different ways. Barry is mentioned to have levelled up with his powers following the events of the previous season though it’s difficult to see any actual evidence of this in the way he uses them. There is a slow motion sequence where he sets up the Royal Flush gang to take down themselves though this isn’t anything he couldn’t have done before. Similarly his handling of saving people threatened by a train collision is suggested to be particularly impressive but it also isn’t something he couldn’t have done before so other than Barry’s uncharacteristic competence the episode fails to establish that his powers are measurably stronger. Such a claim is meaningless at this point anyway.

Iris has levelled up in terms of her journalistic venture. She now has employees, a podcast and has changed the name to “Central City Citizen Media”. She’s busier than ever and in control of an outlet that is experiencing massive growth. It’s unclear how this sudden burst of success came around but Iris handles her role well and comes across as fully confident in what she is doing with her life.

The Citizen plot has more to do with Allegra’s development than Iris as she has already “levelled up” to a particular point where Allegra has more growth to achieve. Iris puts her in a position that she doesn’t feel ready for where she is in charge of people far more experienced than her. The rationale behind it is that Allegra understands the voice of the people so is best placed to ensure that the Citizen always showcases that. It plays out in the expected way with Allegra encountering resistance and being overpowered by those who believe they know better than her before stamping her authority and highlighting that she understands what the mission statement of the outlet is. It’s unclear if this will be a good fit for Allegra or what the purpose of it is but involving her in different stories to round out the character is certainly good in theory. 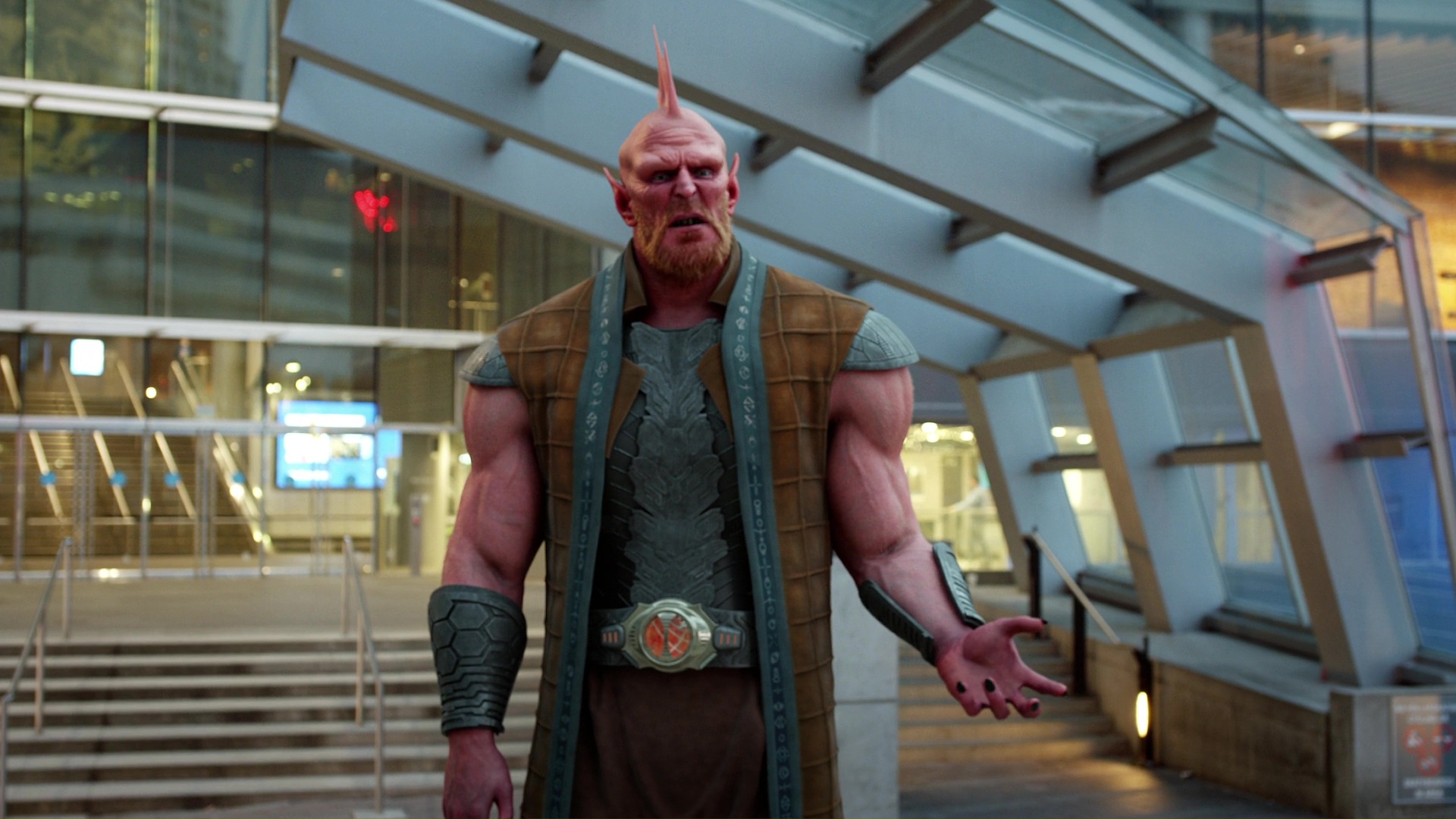 A threat from beyond the stars as well as the future looks to be what will be dealt with over the course of this arc. Despero (Tony Curran) comes back from 10 years in the future to kill Barry before he can be responsible for the end of the world. Team Flash working to prevent vaguely explained future events is far from new territory but Despero is a charismatic antagonist so far thanks to Tony Curran’s effortless performance. Much of the dialogue is awful and his 10 foot tall CGI form could use a few more rendering passes but there’s definite complexity here in that he doesn’t come across as cartoonishly evil. He fully believes in what he’s doing because he has seen the future come to pass and blames Barry for the destruction.

They are are an impasse currently as Barry has no intention of destroying the planet and Despero is being honest about what he has seen so questions need to be answered on both sides. Barry opens up to Despero so that he can be seen as a person who always tries to do good. It’s a compelling setup that introduces the villain well and presents an interesting mystery to carry over the next four episodes. 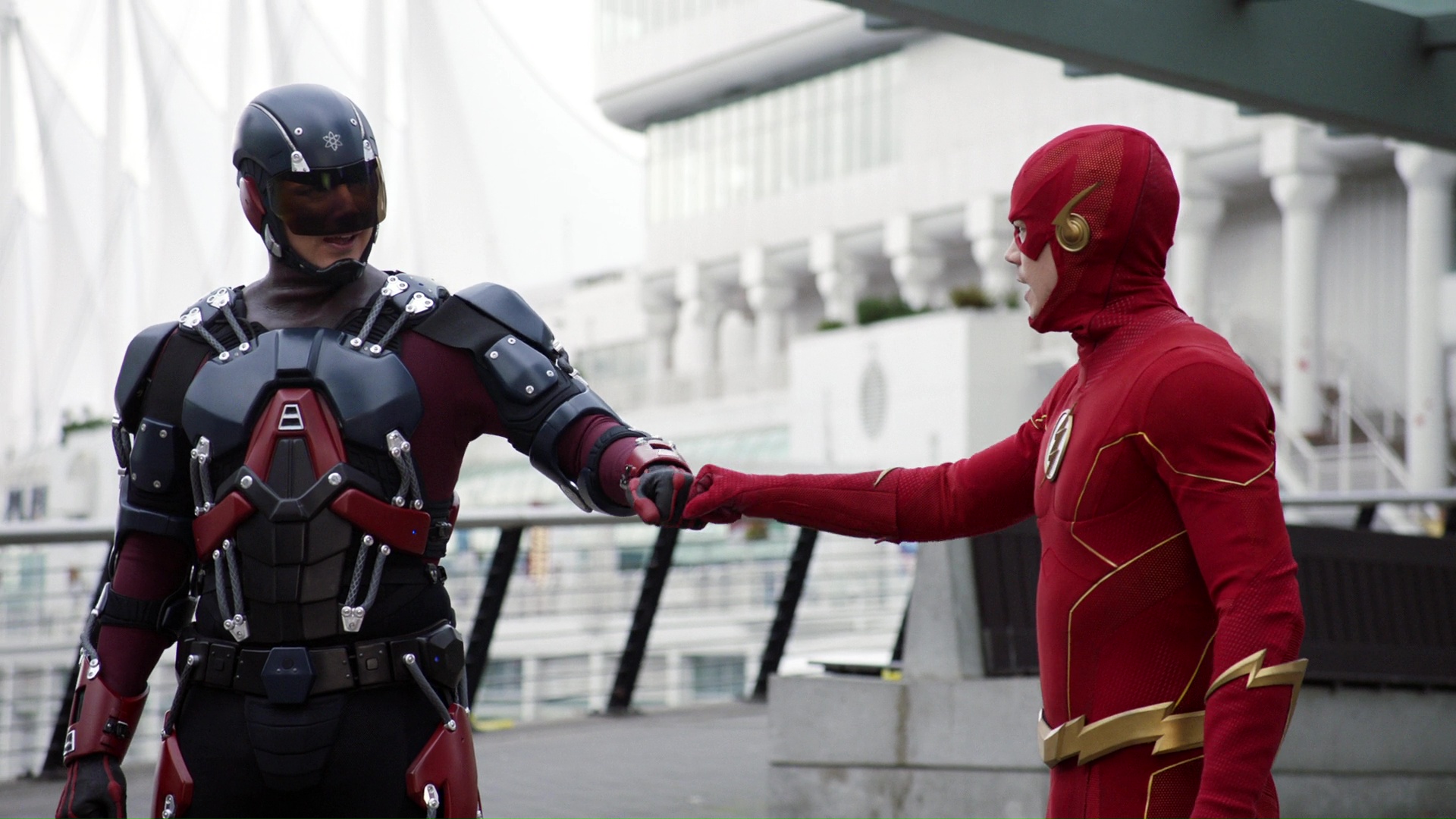 A promising start to the season that provides some refreshingly low key character interactions, sets up a compelling mystery with an interesting villain and makes good use of the guest character. Ray Palmer’s inclusion in the episode was a delight thanks to Brandon Routh’s effortless charm. He has a defined arc he works through around finding renewed purpose that he resolves after some unusually insightful advice from Barry. He works well in the action sequence that contains some strong visuals. Chester’s interactions with Ray work well and allow for a resurgence of his fragile sense of self; an interesting ongoing characteristic. Barry is characterised as being a competent and confident leader secure in his position. It’s great to see that he has developed though how he got to that point isn’t shown and it’s unlikely to be permanent. There are a few low key character moments such as Barry and Caitlin going for a coffee. Such moments have been absent for a long time so hopefully this heralds more of them.

Levelling up is a theme that the episode beats the viewer over the head with. Barry is said to have levelled up in his power level though the way his powers are used don’t seem to be anything beyond what he was capable of doing before. So far he appears to have levelled up in competence which is certainly refreshing. Iris has levelled up in terms of the Citizen which has now become an outlet with employees and a podcast. This plot is more a showcase for Allegra who is promoted to a position that she feels she isn’t ready for. It plays out in expected ways with her suffering a setback after being walked over by more experienced reporters only to stamp her authority. It isn’t hugely interesting but developing Allegra by giving her different plots is good in theory. Despero is a promising villain so far with Tony Curran’s charismatic performance beating some really bad dialogue and questionable CGI. There is complexity to him as he comes from a position of believing Barry to be responsible for the end of the world while recognising Barry is sincere in having no intention to end the world. There is an impasse for now as both passionately believe their angles to be true which creates plenty to chew on over the coming episodes.