The Flash concludes the “Armageddon” event with a moral dilemma, a visitor from the future and an addition to Barry’s costume.

I suppose the best way to describe this opening arc is “inconsistent”; aspects of it have been engaging while others have been confusing or ludicrous. The latter two is certainly something that audiences should be used to by now on this show but there was the suggestion of occasion to this event that the content never manages to live up to. External pressures have made filming true crossovers impossible but the compromise of bringing guests onto this show to weave through this arc has mostly been positive albeit bizarre in some cases. The storytelling itself leaves a lot to be desired but overall the quality has been higher than what has long since become the norm for this show. It’s frustrating that the bar is so low with The Flash at this point that it being better than borderline unwatchable is something to celebrate but we are where we are. 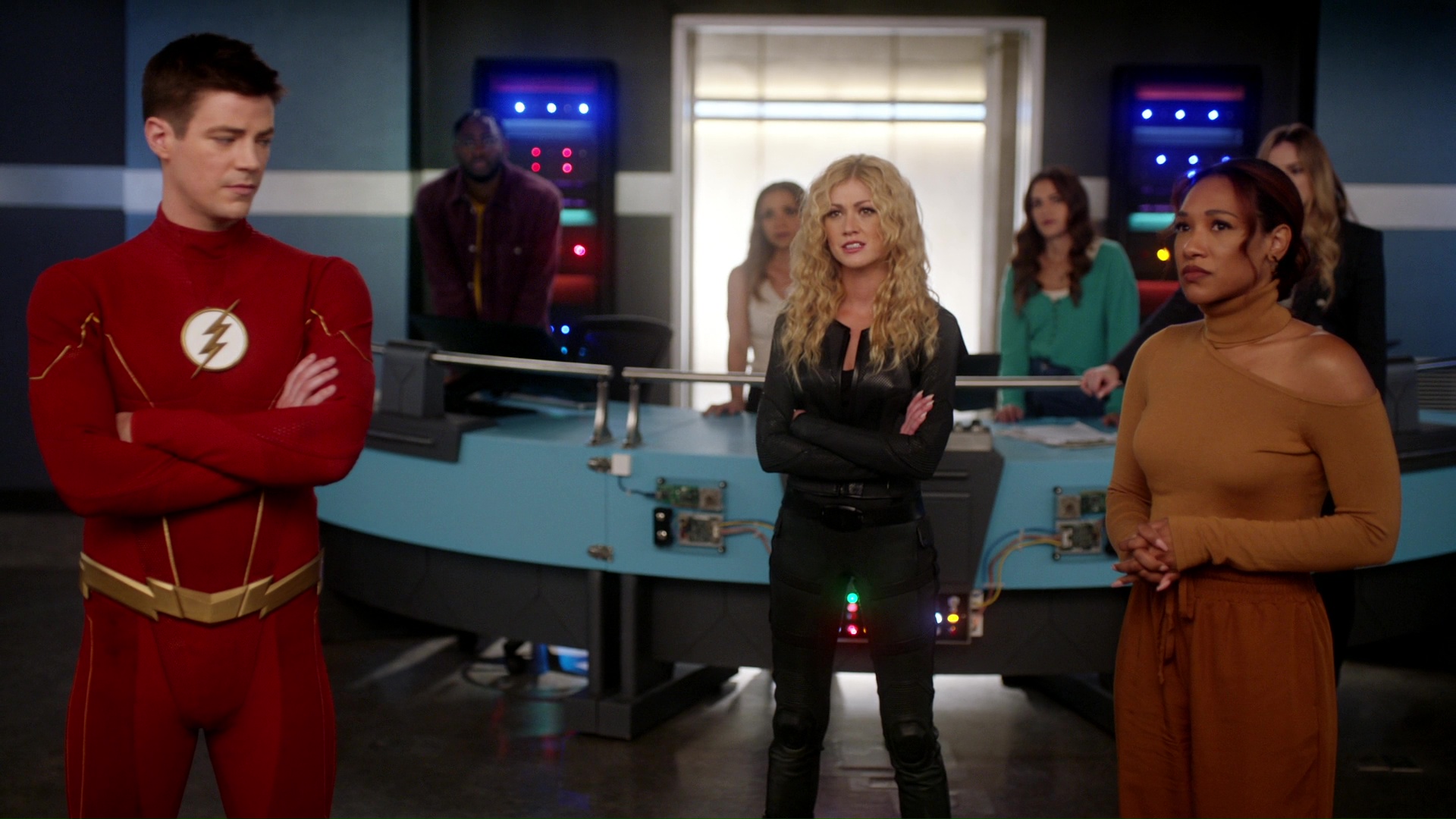 Some help from the future

The final part of “Armageddon” acts as an epilogue of sorts with the previous episode pretty much wrapping everything up. Barry has managed to return the timeline to normal which means that Joe is alive and nobody but him remembers anything that happened since the season began. It’s a tedious reset button plot but at least Barry doesn’t make the decision to keep the truth from everyone else and is immediately upfront about what happened. This means that there is some weight to what happened though the lack of lessons or insight makes it all seem very superficial. All it amounts to is another broken timeline with a few changes that act as a novelty before returning to the status quo.

One lingering problem from the deleted timeline is Eobard Thawne who comes to the present day asking to be saved by Team Flash. He is soon to be erased and wants to remain alive so asks to be saved. This sets up the moral dilemma that the team have to wrestle with for a chunk of the episode. Do they save him or let him die? It’s a difficult question because Thawne represents a significant threat both to Team Flash and the rest of the world so arguably letting him be erased is a viable option since it will prevent so much future suffering. Allowing this to happen when they could do something to save him could be interpreted as them committing murder so the issue isn’t to be taken lightly.

It’s an engaging enough moral question though it’s well worn ground on this show and nothing here takes the debate in new or interesting directions though it is still well handled with various character perspectives coming into play. Most visceral is Caitlin’s point of view. She argues from the point of view of a doctor dealing with the inevitability of losing a patient. She talks about being taught that very early in her career and that acceptance being part of being a doctor. Added to that is the personal animosity she harbours for Thawne because of all the things he took from her. She blames him for Ronnie’s death and holds him responsible for a long list of terrible things she has had to deal with. This motivates her hatred for him and her desire to ensure it’s impossible for him to harm anyone ever again. 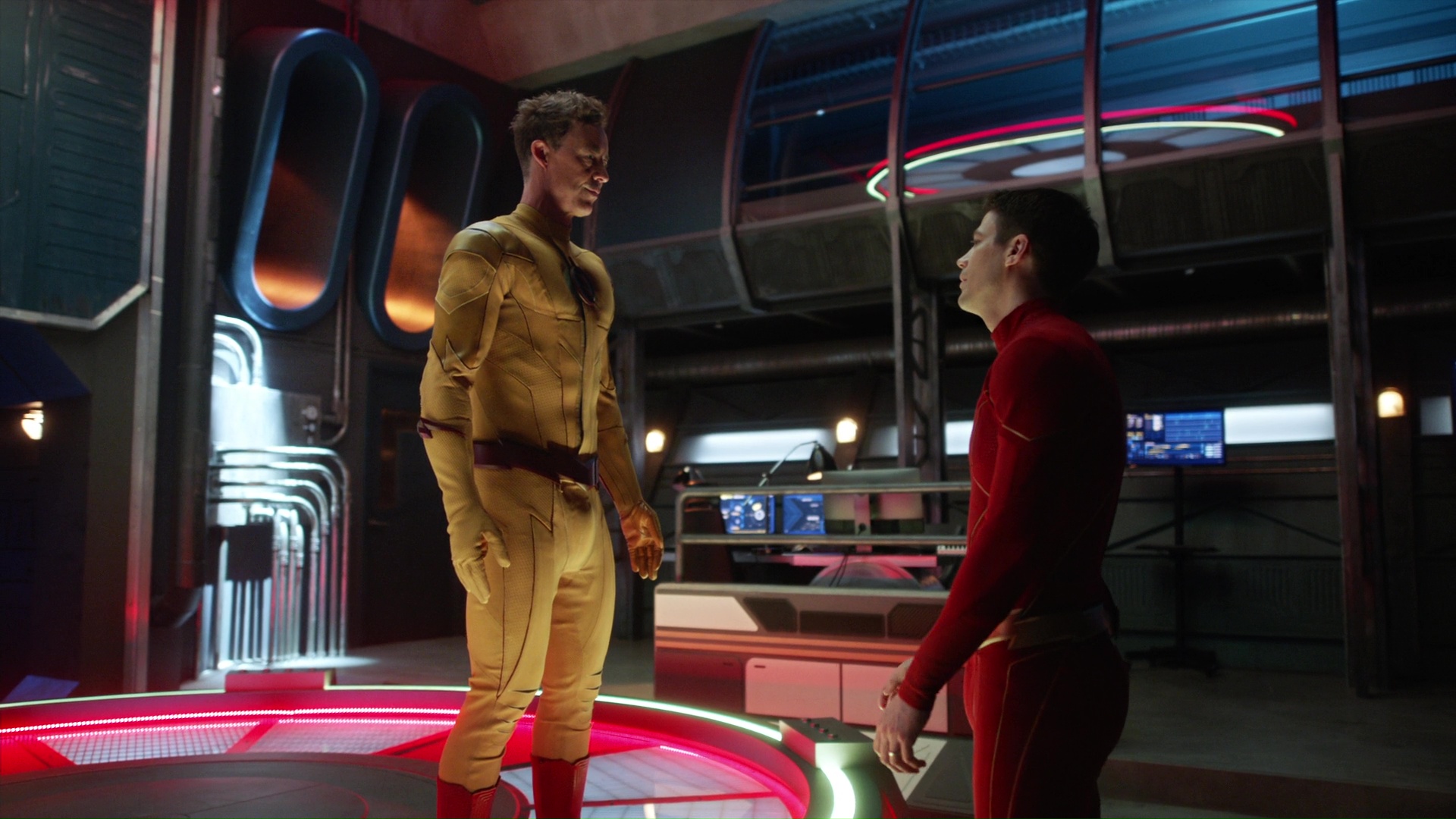 Give me one good reason why I should save you

Barry is torn between his heroic instincts and everything Thawne represents. Their conversation where Thawne details the reason he started hating Barry is an illuminating one even if it does struggle to seem credible considering all the changes to the timeline that have been done since this show began. There is no cohesive story so it’s unlikely the events Thawne talks about could ever happen. It only serves to highlight the missed opportunities in building this complex non linear antagonistic relationship. The purpose of the conversation is to confirm that saving Thawne changes nothing about their relationship as he flatly states that he will go back to devoting his time to destroying Barry’s life. In theory this should make the choice easier as knowing he won’t stop means that it’s possible to conclude that he’s too dangerous to be left alive.

The debate is settled when Joe weighs in and demands that Barry come to his senses. As far as he’s concerned there’s no choice to make because they have been made aware of a problem and directly asked for help in solving it so they now have an obligation to do everything they can to save him. Joe’s point is that Barry doesn’t get to choose when to be a hero and can’t forget his obligations when it becomes personally convenient to do so. With Joe’s speech the decision is made and Team Flash won’t compromise their principles. It’s all well and good to have this argued from a morality standpoint but the episode never digs into the real complexity of this issue. Thawne is a very dangerous man so there’s an argument that anything he does following this point is their responsibility since they’re the reason he still exists. Instead a compromise is found where they rob him of his speed and lock him up in a secure facility. Something that will undoubtedly be a very short term solution.

Adding to the “let him die” side of the debate is visitor from the future, Mia Queen who is very much back to her less well adjusted outlook following a relentless two year campaign to find her kidnapped brother. She is at the point where she’ll kill if she feels that she has to and she strongly believes that Thawne shouldn’t be saved. A brief scene with Iris outlines this and sets up her being convinced otherwise later in the episode through the usual appeal to her better nature. As good as it is to see Mia in the mix her presence wasn’t necessary as she is largely used as an obstacle later in the episode and only contributes to the debate in ways that almost any other character could. 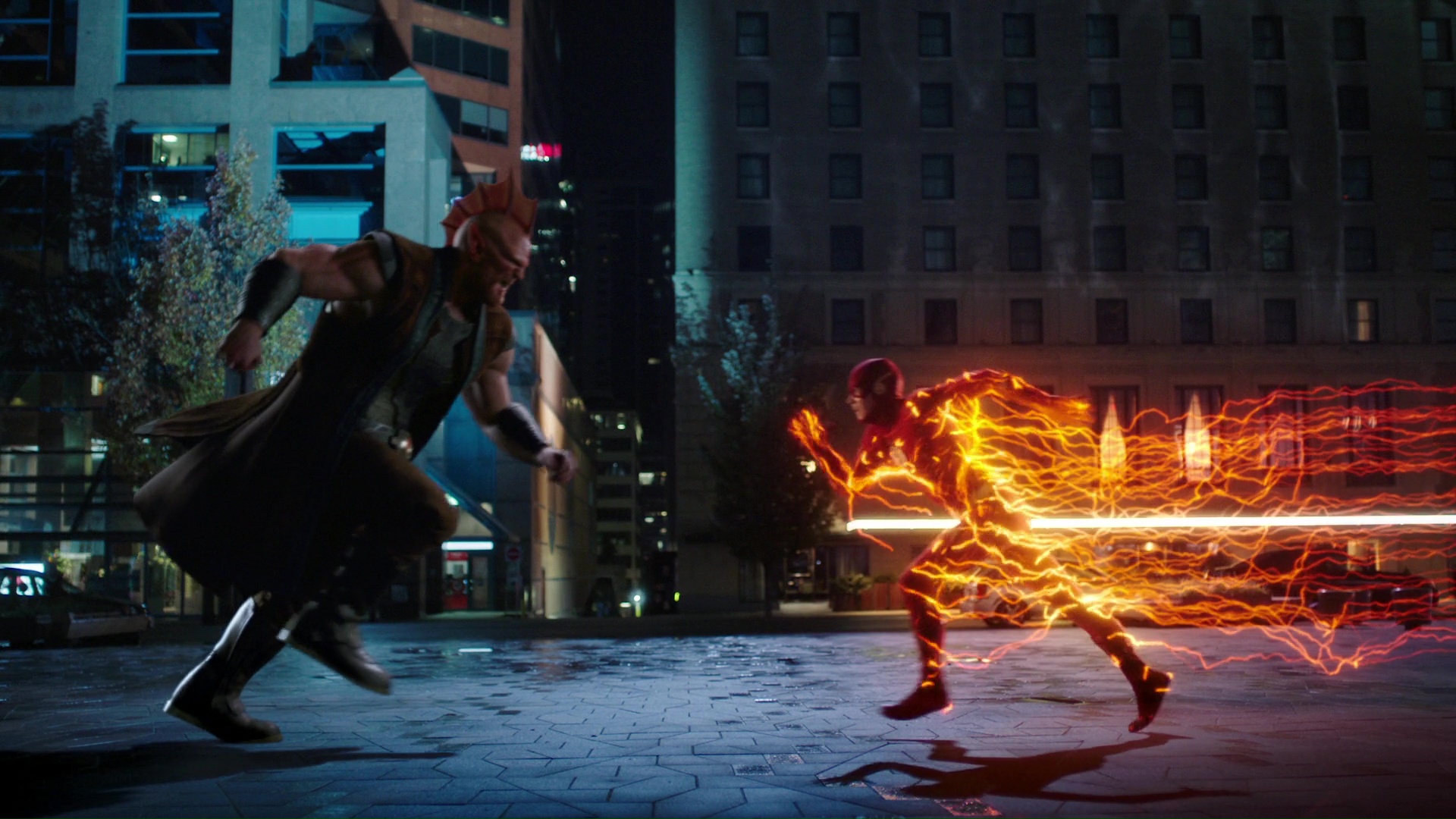 Despero also returns to try and force the decision. He believes that Thawne should be erased because he doesn’t want the world to be destroyed so he possesses Mia to attack Team Flash and tries to distract Barry long enough to let nature run its course. After a promising start Despero amounts to a disappointment because his presence in the story is largely passive. He first appeared to outline the problem as he saw it, some time was spent building to that eventuality before pointing out that it was all a fallacy. This episode confirms that Despero hasn’t been entirely honest about his own origins so it’s unclear what his purpose actually was other than to provide an excuse to extend the convoluted plot a little longer. In this episode he’s relegated to depth free antagonist who fuels an action sequence where Barry exhibits yet more uses of his powers that have never been seen before. This show has no grasp on structure any more and Despero is a great example of that.

Another superfluous appearance was Damien Darhk who got washed up in 2021 following Barry fixing the timeline. He expects to be erased in the same way Thawne was but doesn’t ask Team Flash to help him because he’s currently taking the place of his daughter, Nora who hasn’t returned yet. Ince the timeline corrects he will disappear and Nora will be restored which is exactly what he wants. He appears towards the end of the episode to talk to Joe about fatherhood making them better people before sharing a final moment with Nora prior to him being erased. It works well and Neal McDonough’s performance is excellent but his appearance is unnecessary particularly with him not participating in the main plot such as it is.

The celebration once the Thawne situation has been dealt with was a nice moment. Taking the time for Team Flash to simply enjoy being around one another is always a positive addition to the episode. It lets the tension subside and reinforces that this group of characters are a found family who are at their best when together. The actors have such strong chemistry that is good to see utilised outside of constant crisis situations. Adding Mia to the dynamic could have been better as she doesn’t meaningfully interact with any of them with the bulk of her contribution to the celebration being a furthering of her search for William which may never be resolved. The Armageddon arc is now over with a long hiatus for The Flash before seeing what the rest of the season will bring. 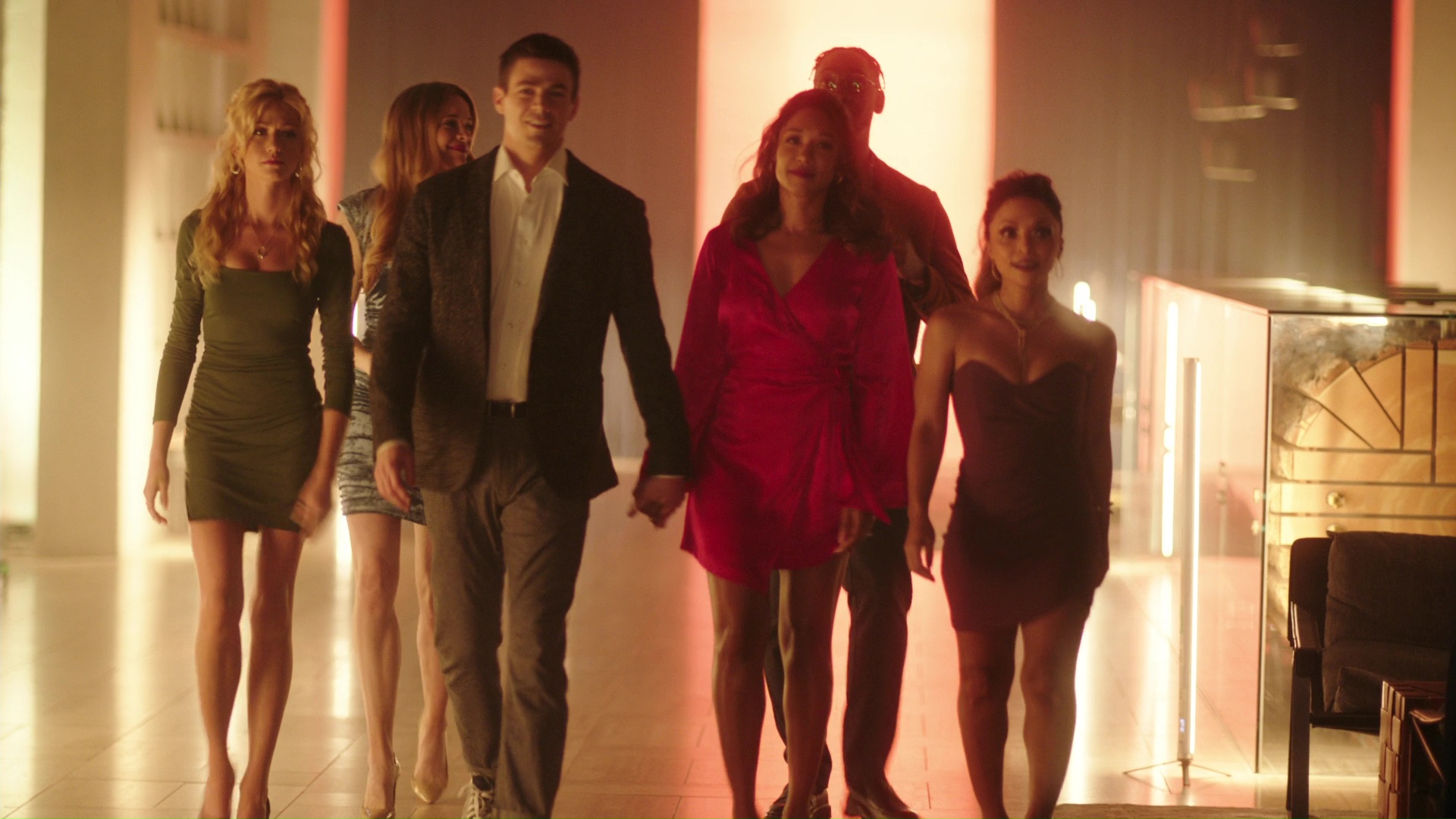 An uneven episode with a shallow moral debate, some engaging character moments and an underwhelming conclusion to the arc. Thawne presenting Team Flash with a moral dilemma through asking to be saved brings up a familiar conflict that superheroes have to deal with but doesn’t take it in new or interesting directions. It is still well handled with certain character perspectives such as Caitlin viewing him as a patient she can’t save while hating him for all he took from her. Barry learns through talking to Thawne that letting him live means that they will be in constant danger. Joe puts an end to the debate by pointing out that heroes don’t get to choose whether someone gets to live or die. They have been asked and can do something to help Thawne so they have an obligation to do so. This is all well and good but it ignores the range of points that could be raised in favour of simplifying the issue. It’s further simplified by finding an easy compromise involving robbing Thawne of his speed and locking him up; something that is unlikely to stick.

Adding to the “let him die” side is Mia Queen visiting from the future. Her presence is welcome but unnecessary as she doesn’t feed into the plot in any meaningful way. She exists to be an obstacle that the team have to deal with later and argue for Thawne’s life being allowed to end before being convinced otherwise later in the usual way. Despero’s inclusion in the episode further highlights how meaningless his role in this arc was especially with it being pointed out how dishonest he was about his own origins. He fuels an action sequence and little else. Damien Darhk’s appearance was entirely superfluous though the scenes he had were strong. Team Flash taking the time to celebrate was good to see as it allows the cast’s natural chemistry to shine. Including Mia in the dynamic could have been better but otherwise it allowed tension to be released. The Armageddon arc is now over with a long hiatus for The Flash before seeing what the rest of the season will bring.