The Flash picks up on the cliffhanger from last week when Grodd stages an attack on Central City at the head of his Gorilla army.

I’ve talked in the past about how I applaud the ambition of the creative team on this show. Having Grodd and King Shark in episodes at all is really impressive given the budgetary limitations of a weekly TV show. Showing Gorilla City and an army of Gorillas in any capacity is going to be an incredible strain on the limited resources the show has so the fact that the creative team are willing to give it a go is definitely worth some recognition. 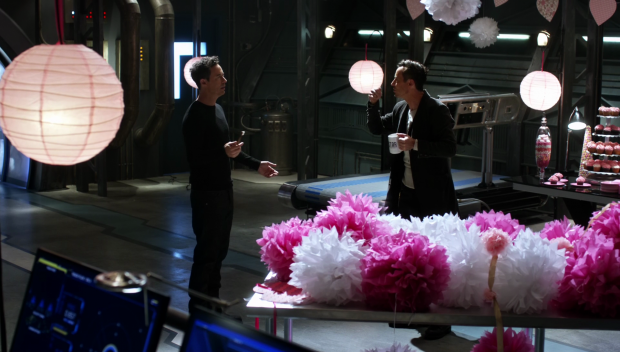 A tale of two Wells’

My relationship with this show is very troubled this season because I’m just not enjoying it due to some persistent mistakes that should be really easy to solve. I’ll admit that this episode hasn’t been as bad as some of the others but the problems the show has are still on display.

A big issue I have with the show is that the writers seem to forget that The Flash used to be a lot of fun to watch. It was notable because it embraced the comic book roots and didn’t add any unneeded darkness or grit. It was a show that didn’t take itself too seriously but still managed to inject the right amount of emotional weight to prevent it from becoming disposable fluff. Embracing the comic book roots is something that still happens but the default tone seems to be a really gloomy one. I suppose this goes hand in hand with the constant raising stakes but there should be a way to find some kind of balance that allows the show to be fun now and again.

This episode is especially downbeat throughout. The focus is more on the various team dynamics and Barry trying to resolve an internal conflict than the pending Gorilla invasion. For budget reasons the episode could probably only do so much with the Gorilla’s but the lack of focus on that problem made it seem far less urgent than it should have.

Barry’s major dilemma this week is over whether he should kill Grodd or not. It’s clear to him that he will never stop his campaign to destroy Central City and the only way to prevent that from happening again is to kill him. The lethal force debate is a common one over on Arrow but has largely never been an issue here because Barry and Oliver are very different people who have become heroes for very different reasons. Barry has rarely had to face the idea of killing and anytime his enemies have wound up dead hasn’t been as a direct result of anything he did. 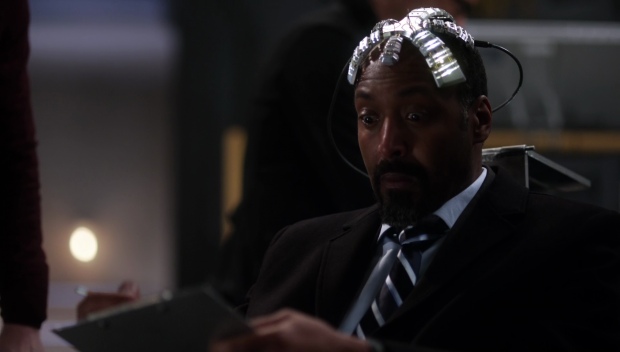 The question makes sense in the context of this episode as Grodd clearly isn’t human and lives in a society where killing is the norm in terms of asserting dominance. Killing Grodd would likely prevent the invasion and change the future in some way. Of course there’s no guarantee that the events are linked as the Gorilla invasion is unlikely to be connected to Savitar in any way.

I was surprised that Barry seriously considered lethal force against Grodd because it just doesn’t seem to be in his character to think that way. Fair enough he’s desperate to save Iris any way he can but there should be lines that Barry is unwilling to cross. The whole scenario was manufactured so that Iris could give him a pep talk about being a hero and standing up for what he believes in. She also tells him that her survival isn’t worth him losing what makes him a hero. These are all platitudes we’ve heard before with slightly different wording. As I said, the question over killing Grodd does make sense but I think Barry should have been the one championing a better way.

His conversation with Harry actually highlighted the problems with Barry as a character. As Harry puts it, he’s an idiot. There’s more to it than that but Barry consistently fails to recognise what the Flash represents as a hero. Harry points out that Barry inspires him to be a better man and points out that doing one questionable thing makes it easier to do more. Basically Harry doesn’t want to see him slip into a dark pattern of behaviour because he’s much better than that.

Harry’s presence brought a lot of good moments with it. The back and forth he had with H.R. was amusing to watch though I do feel that Harry was somewhat harsh to his doppelgänger when constantly berating him about his lack of genius. Seeing Tom Cavanagh play two distinct versions of the same character in an episode highlights how good an actor he is and how well he has crafted the characters that he plays. Other than looking the same there is nothing to connect the two versions of Wells and this episode has some fun exploring those differences. 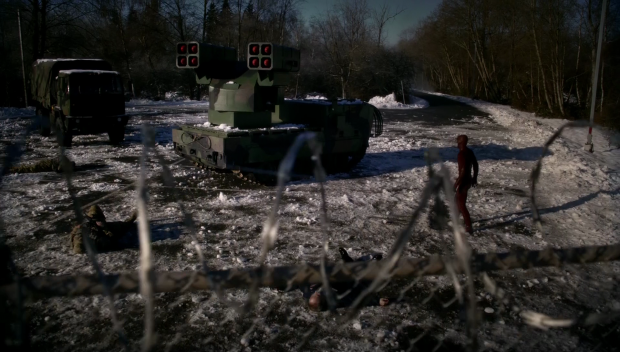 Jesse’s plans to move to Earth-1 to be with Wally thankfully don’t take up too much time in the episode and I’m pleased that not a lot of time was wasted before Jesse decided to tell Harry she was moving. I also liked that Harry’s reaction was very accepting even if it doesn’t mesh with his overprotective nature. It’s possible that he has become less overprotective in the time we haven’t seen him so I’m willing to go with it. Telling Wally that he’s dying was a great way for Harry to mess with him. There’s nothing he can do about the move but he can at least have some fun with it in the meantime.

As for the Wally/Jesse relationship I’m still far from invested in it. Other than some flirtatious earlier in the season it largely feels like it has come from nowhere and their cosy interactions at the end of the episode suggest that the relationship is further on than it should be. It seems that the writers are more keen to write relationship milestones rather than developing them organically. Barry’s proposal to Iris backs up that theory in spades because their relationship hasn’t developed organically either.

Cisco had a big part to play in this episode with most of his scenes focusing on his connection to Gypsy. His powers have grown to the point that he is able to vibe emotions from people which proves to be dramatically convenient because he senses that there’s more to her than she’s letting on. This progression amounts to her declining to help before finally agreeing when asked again. I feel like Gypsy’s role could have been far more significant than that but I like the flirtatious nature to their relationship and Gypsy telling Cisco that she couldn’t handle him was legitimately funny. I can’t help but think that Gypsy is the Earth-19 gender bent version of Cisco. That would be an interesting reveal if it were to come to pass especially considering all the Star Wars references.

The Gorilla invasion itself was relatively well handled considering the resources the show has. An early scene involving Grodd taking over Joe and using him as a mouthpiece established the threat well enough when he made Joe shoot himself. It did result in some weird magnet memory play that wasn’t really necessary and the nuclear threat detour definitely wasn’t needed. What is it with the CW superhero shows and nukes? It’s become laughable at this point. 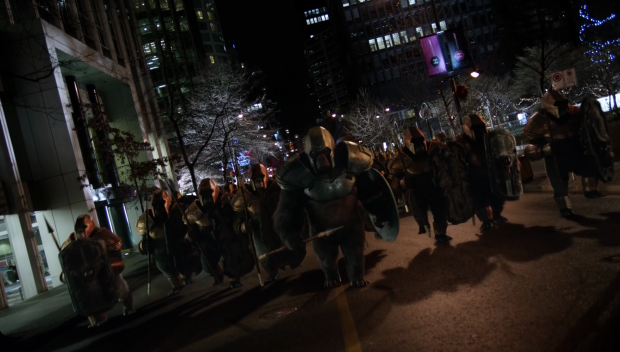 Grodd and his army finally arrive

I found the whole stopping the nuke sequence to be ridiculous because it was so completely bereft of tension. Barry was frantically typing on a keypad as the other characters stood around reminding him of how much time he had left and reading what was on the screen that the viewer could also see. There’s probably no way to make something like this exciting so there’s no real point in doing scenes like this.

As good as the visual effects were when Wally, Jesse and Barry took on the Gorilla army I didn’t really feel the threat that they were supposed to represent. It all took place on a nondescript street and the army didn’t really do much other than know Wally and Jesse off their feet. Barry still hasn’t learned that rushing a shield isn’t a good idea.

The sequence got better when Solovar was brought in. His brief fight with Grodd made for good viewing even if it seemed like no contest between them. This actually makes sense as Grodd was reluctant to face Solovar directly last week so at least we find out why that is.

My issue with bringing Solovar in is that it solves the problem a little too neatly. Grodd is defeated and allowed to be locked up in an A.R.G.U.S. facility while Solovar takes his army back to Earth-2 never to bother anyone again. It does open the door for less budget heavy Grodd appearances in the future but we still have no real insight into Gorilla city as a society. Solovar certainly isn’t a character because we know nothing about his leadership style or what makes him a better choice than Grodd. I like that Gorilla city was done but a lot of the potential was wasted. 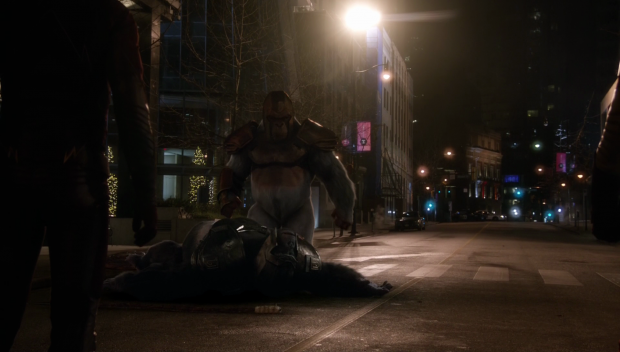 Another uneven episode that downplays the Gorilla invasion threat in favour of internal team dynamics. Barry’s internal conflict over whether to kill Grodd makes sense in context given how Gorilla City works as a society but the argument for killing shouldn’t have come from Barry. It felt like a manufactured way to bring out the same platitudes we hear almost every week. Harry being back was a lot of fun with everything from his back and forth with H.R. and winding Wally up about Jesse moving to Earth-1. It’s a shame that he’ll be gone again.

Cisco had a lot to do in the episode mostly around convincing Gypsy to help. He can apparently vibe emotions now and uses that to appeal to her better nature. Their flirtatious banter back and forth is a lot of fun so I hope to see more of that. The Gorilla invasion when it happened was visually impressive but didn’t amount to much. I found the nuclear threat to be laughable and the Gorilla army didn’t actually do much so there wasn’t a massive threat associated with them. The fight between Grodd and Solovar made for good viewing but wrapped things up too neatly and the lack of characterisation for Solovar makes it unclear why him winning is any better.