The Flash heads to Earth-2  when Harry is captured by Gorilla Grodd who has bigger plans than Team Flash initially thought.

Grodd (David Sobolov) has been one of the more interesting antagonists this show has had. A lot of that is to do with the fact that he has been rendered convincingly using what must be a limited CGI budget. He is also an interesting character who has been seen as a brutish villain as well as a misunderstood monster. In his two appearances he has evolved and this episode marks the next stage in his evolution. He is now fully articulate and has some really sinister ambitions. 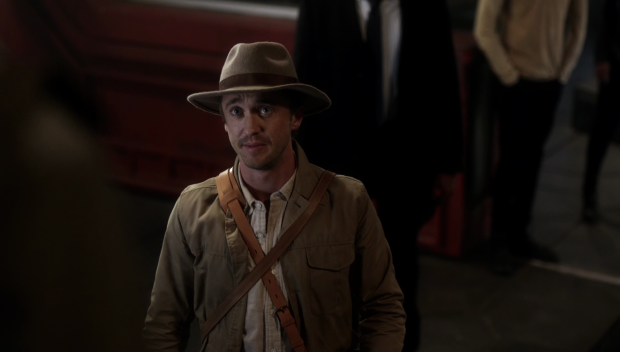 Indiana Julian and the City of the Psychic Apes

Given how expensive Grodd is to show on screen the show can’t have long scenes featuring the character but the way they get around that is fairly inventive. Having him telepathically control humans to get his point across works really well and it allows Tom Cavanagh to play yet another character. His performance as Grodd is excellent from the way his mouth moves to the tone of his voice. It’s unintentionally hilarious to watch how seriously the other characters seem to take it but it does work really well.

At first it seems like Grodd is asking Team Flash to help him take down his rival Solovar (Keith David) so that he can lead the Gorillas and stop them from invading Earth-1. Naturally it turns out that Grodd is the one intending to invade Earth-1 because he resents humanity for banishing him to Earth–2. It’s a valid motivation but Grodd’s plan was far too easy to predict. I’m baffled that anyone on Team Flash couldn’t at least think to find out more information before deciding how to act. All they have is Grodd’s word on the situation and they only interact with Solovar for a very short time before deciding that Grodd’s side should be taken.

Barry’s fight with Solovar was impressive enough albeit short and cartoonish looking in places. I’m not going to hold it against the episode because the effects team did some really impressive work here. The fact that we got to see Gorilla City with a large population at all is notable and having a fight between Barry and Solovar that managed to be as creative as it was definitely deserves some recognition.

The biggest problems this episode had was with the characters rather than the visuals. Grodd and Solovar are apparently bitter enemies but almost no time is spent developing that in any significant way. Solovar wasn’t a character as such as he only seemed to exist to misdirect the viewer from what was really going on. It really was a waste of the excellent vocal talents of Keith David to give Solovar such a reduced role. This could have been a really good story about Grodd and Solovar’s hatred for one another. 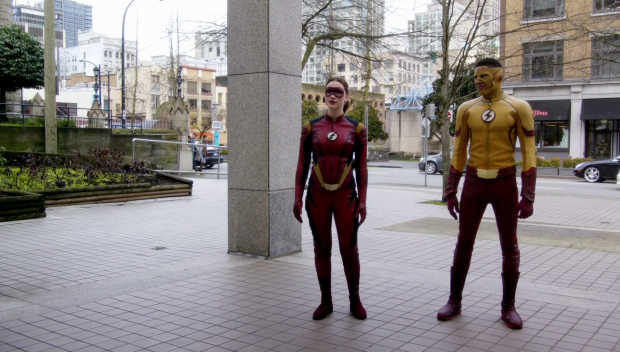 Members of Team Flash don’t fare much better as they spend most of the episode sitting in a cage. This could have been an opportunity to deliver some insight into the character dynamics but this largely doesn’t happen. It’s just another example of them missing the obvious and making poor decisions. The decision to bring Caitlin along because Grodd felt a connection to her could have been the emotional hook for the episode but Caitlin barely interacts with him. In a better episode Grodd could have caused Caitlin to feel sympathy for him before betraying her to show how much he has evolved. Another missed opportunity that was staring the writers in the face.

Julian is a character that is really growing on me. I laughed when he showed up in his expedition gear and the references he made to Planet of the Apes were a nice touch on a meta humour level as Tom Felton appeared in Rise of the Planet of the Apes. It was Cisco who got the famous “mad house” line though. It does seem that Julian’s days are numbered now that he is actively pursuing Caitlin.

It’s great to see Harry back as I had almost forgotten how good a character he was. His trademark sarcastic cynicism was fully on display and his shocked reaction when he saw that H.R. was still on Team Flash was really amusing to see. Hopefully he won’t be gone after the next episode as Team Flash could really be doing with his input into the Savitar situation.

The episode fails on a basic logic level. Grodd reveals that the whole thing was a deception to get rid of Solovar and use Cisco to open a breach to Earth-1. Not a bad plan on the surface but most of it could have been achieved through mind control. What was to stop him mind controlling Barry to fight for him before forcing Cisco to open the breach by also using mind control? Solovar even takes control of Cisco at one point so it’s not as if he couldn’t do it. I’m also not clear on how he managed to get a hold of Gypsy but that may be explained in the next episode. 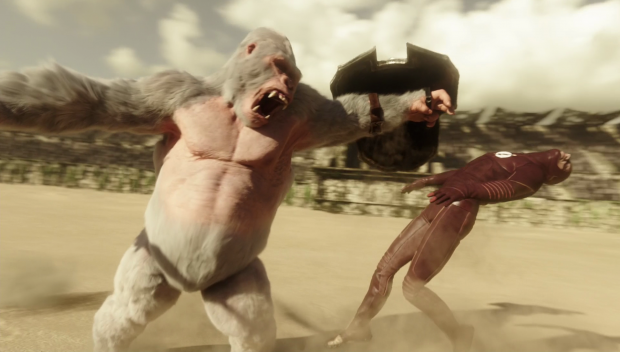 Solovar proves to be a challenge

I did like that Barry tried to appeal to him on an intelligent level by pointing out that violence isn’t something commonly associated with intelligence. It seemed like it would be a typical speech that changes the mind of the villain but Grodd is so committed to his plan that he isn’t willing to a listen. I like when a villain sticks to their guns and the hero fails to get through to them.

The escape was really badly done. Cisco offering himself up as a sacrifice to stop Grodd from carrying out his plan was all well and good because it shows him as heroic and willing to go the distance in service of doing the right thing. The biggest issue was the mechanics of the whole thing. It seems that the only way to kill Cisco was for Caitlin to use her powers rather than simply strangling him or something which artificially puts the threat of Killer Frost back on the table.

We’re definitely heading that way because there’s no way that the show can leave that be and get away with it but suggesting that this might be the way to do it is a bit ridiculous. Also, apparently Grodd was able to suppress both Barry and Cisco’s powers but couldn’t do the same with Caitlin’s because he didn’t know about them. My assumption was that it was the same technology they use in the pipeline which should have been the same assumption that Cisco was operating on so things are just being made up on the spot to suit the plot at this point.

The mechanics of the escape involving Barry being frozen to death only to bring himself back was fairly ludicrous as well. What reason did Grodd have to drag him out and leave him just outside the cell other than for a convenient escape? It boggles the mind how badly this was done. 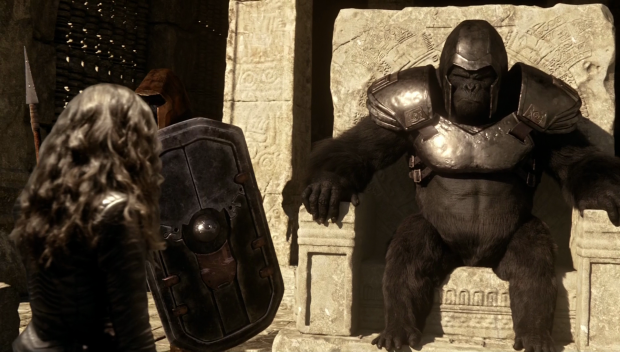 Obviously the Gorilla army attacking Earth-1 is going to happen which does create a potentially interesting narrative around Barry’s desire to prevent Iris’ death. It has been established that he has already made minor changes but it seems possible that attempting to prevent Iris’ death might end up being the thing that causes it. I imagine this will be a point that’s raised next week and if it isn’t then it definitely should. There’s still a lot of work to do to make this future prevention story compelling.

Back on Earth-1 there wasn’t really anything interesting going on either. The focus was on the budding Wally/Jesse relationship but there’s nothing interesting about it. Apparently Wally has been pining for her since she left but this is the first we’ve heard of that. Maybe he’s just saying that because he thinks that’s what she wants to hear but I honestly don’t think the writers are clever enough to craft a story like that. All this feels like is a standard manufactured conflict situation that resolves itself with the expected speech by the end of the episode. Jesse’s desire to move to Earth-1 pretty much comes from nowhere and I wonder why it isn’t addressed that her leaving would leave Earth-2 without a Speedster protecting it. Why was Wally moving to Earth-2 never suggested? It would make a little more sense.

There was a good scene between Jesse and H.R. where he tries his hand at fatherly advice even though he isn’t her father. It seems that he’s pretty good at it even though the message he delivers is essentially “follow your heart”. Tom Cavanagh really doea a great job this episode by pulling triple duty as H.R, Harry and Grodd. Is there no end to his talents?

I’m sure it’s easy to tell that I’m really frustrated with this episode but it’s much bigger than that. Basically I’m at the point where I’m growing incredibly frustrated by the show itself. To put it bluntly, I don’t think it’s good any more and this episode is a perfect example of that. Some good character moments and ambitious concepts aren’t really enough to hide the lazy writing and complete departure from logic. I like the characters and I’m still compelled to see what happens so I’ll keep watching if only to stay up to date with the wider universe it inhabits but quality has been steadily declining since the excellent first season. 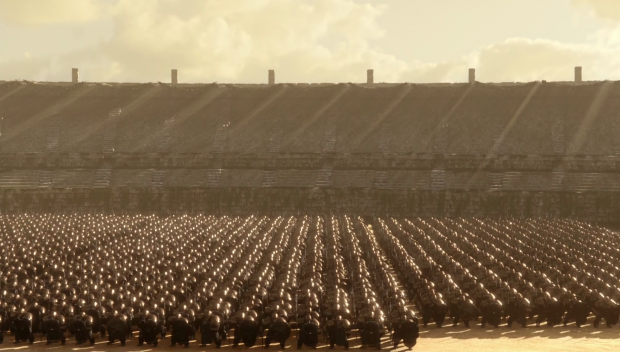 An ambitious episode that doesn’t manage to deliver quality where it really counts. Doing Gorilla City on a budget can’t have been easy and the effects team should definitely be recognised for the impressive visuals they managed to create this week but there were so many problems with it. Grodd’s motivation was strong enough but the episode doesn’t build the rivalry he has with Solovar in any significant way. Solovar was barely a character and a waste of Keith David’s talents. There were also a lot of missteps in how the Team Flash characters were used and the complete departure from logic at frequent points in the episode.

It was great to see Harry back and Tom Cavanagh’s triple performance was absolutely the highlight of the episode. I hope he stays around for a while longer than the next episode. Earth-1 had very little interesting going on as well with the Wally/Jesse relationship feeling completely forced. There was a good scene between Jesse and H.R. though. Hopefully next week will be better.