The Flash starts to establish its new status quo as a tech based villain starts attacking people in Central City.

One of the promises that came with this season was that The Flash as a show was going to lighten up. Last season was consumed by dark and angsty storytelling so the producers promised that this season would abandon that in favour of a tone resembling the one that drew people to watch the show in the first place. 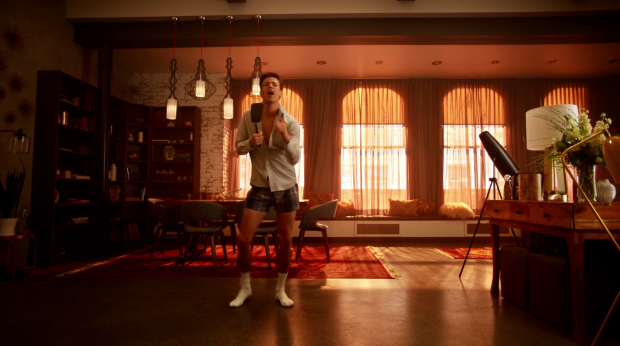 So far they seem to be making good on that promise. Barry is very light hearted in this episode and is back to enjoying being a superhero. His recent return from the Speed Force has put a spring in his step and he’s focusing on what is good about his life though I could have done without yet another tired repeat of the Risky Business dancing scene. The same applies to Cisco who is less burdened by responsibility now that his best friend has returned. He has resumed his role as the quippy tech guy and it’s a good place for him to be.

The writers will need to watch out though as it’s possible to go too far in the other direction. If everyone’s having too much fun and the episodes forget to really be about something then the whole thing simply feels disposable. That isn’t the case here but there is a risk of falling into that trap.

Despite the lighter mood there are some lingering issues that the team have to deal with. Barry and Iris struggle to find a rhythm now that they’re working together, Cisco has trouble finding time away from his work to spend with Gypsy and Caitlin is keeping her Killer Frost relapse a secret.

I’ll cover off Caitlin first as she does very little in the episode other than bounce off Cisco to tell him when he’s painfully misguided about his relationship with Gypsy. She is also the one to suggest a solution to Barry and Iris’ communication problem but there’s nothing in here for her as a character which is disappointing as it shows The Flash still has issues with its female characters in terms of giving them agency and engaging plot lines. There is one scene where she fights back her transformation into Killer Frost which adds nothing other than telling the audience that she is keeping this a secret from the team. This sort of lazy storytelling was really frustrating last season so I’m disheartened to see it continue here especially when there’s no good reason for it. 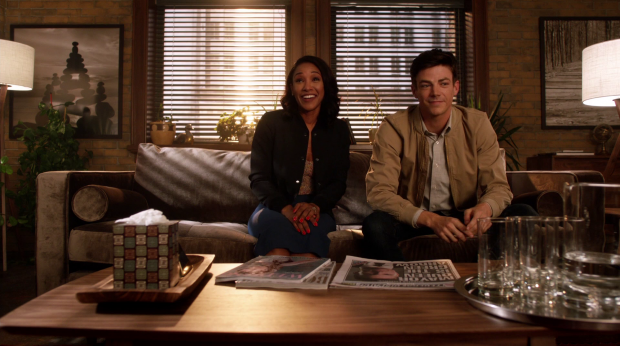 Barry and Iris are having trouble communicating as a couple. There are a lot of adjustments to be made with Barry being back and the two of them working together as part of Team Flash. Barry is shown to be ignorant of any issues between them despite the fact that Iris isn’t exactly subtle about her less than enthusiastic reactions to the things he does. The first example is when he goes ahead and makes all of the wedding plans without consulting her. It’s clear his heart is in the right place but it’s still a stupid thing to do though I can see why Barry might not see a problem with it since he was able to put her name on the lease of an apartment without consulting her and there were no issues there.

That’s the problem when a show doesn’t bother to explore a relationship like this. It’s unclear what Iris is willing to put up with and the actual dynamic hasn’t been established which means that every conflict they have is completely manufactured just to pad out an episode. In this case a lack of proper communication seems somewhat reasonable as relationship issues go but the approach left a lot to be desired.

I was confused as to why Iris bypassed the “trying to talk to Barry” step and went straight to couples counselling. Fair enough he was doing things without consulting her and making outlandish assumptions but there was no attempted confrontation so the whole thing feels meaningless. The couples therapy scenes are entertaining enough for the most part though there’s very little of note that comes out of them. Iris does finally open up about feeling abandoned by Barry who just left with very little consideration for what it would do to her. It allows Barry to see that things aren’t as perfect as he thinks they are. Of course it could have easily been accomplished long before that point but hopefully it’s a lesson that Barry can learn.

Barry isn’t exactly at his best in this episode and I’m actually alright with that. I don’t expect heroes to be flawless because that’s boring and more engaging stories can be told about characters who grow because of lessons learned. This show has the persistent problem of characters learning the same lesson week on week and instantly forgetting it so we’ll see if Barry bears this in mind and adjusts his behaviour accordingly. 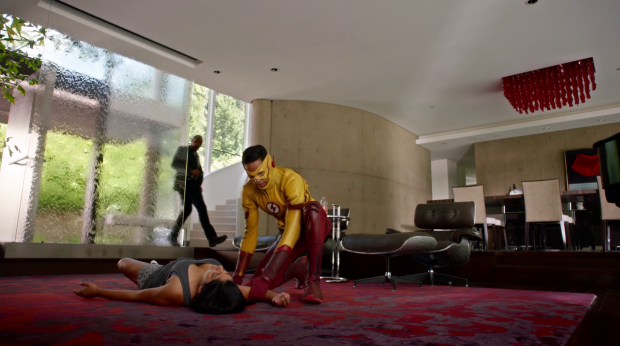 Wally gets to do something

Cisco is having his own relationship issues with Gypsy when he cancels their date once a crisis erupts. She tells him that it’s fine but as anyone knows; when a woman says that the opposite is meant.. I mean this sarcastically as the writers of this show don’t understand how real people interact sometimes. Considering Cisco is working to prevent loss of life his lack of attention on keeping a date with Gypsy should be understandable. Especially considering her job but the episode takes this simplistic view to manufacture conflict. Gypsy being upset with him because of her desire to celebrate “One One One Day” is also ridiculous because there’s no way Cisco would ever know what that is unless she had told him ahead of time. He does make it up to her and all seems well but it’ll make no difference when Cisco finds out that Gypsy is an alternate version of him who happens to be female.

The villain of the piece is Ramsey Deacon aka Kilg%re (Dominic Burgess) – the link has very little to do with this version-; a Metahuman with the ability to control all kinds of technology thanks to merging with malware that he created. The details aren’t really important but the character is. This version is a Silicon Valley app developer who feels betrayed by his partners who cashed in on his idea. His response to that betrayal is to systematically hunt them down and kill him. The ways he does this are really creative such as causing an elevator to shake someone to death and sabotaging an insulin pump to deliver a lethal dose. His motivation is dull and predictable but a tech based villain feels like a refreshing change.

When he takes on Barry he is able to take advantage of the new tricked out Flash costume and assume control of it. This leads to some comedic moments such as the suit’s raft protocol activating and inflating to a ludicrous size but there is also real tension to it as Barry becomes his literal worst enemy which externalises this familiar problem for him. The solution to the problem comes from Barry listening to Iris and taking her suggestion which completes the conflict arc in this episode despite the fact that Iris was the least equipped person to suggest any way to stop the suit from self destructing. The concept was fine but the execution left a lot to be desired. 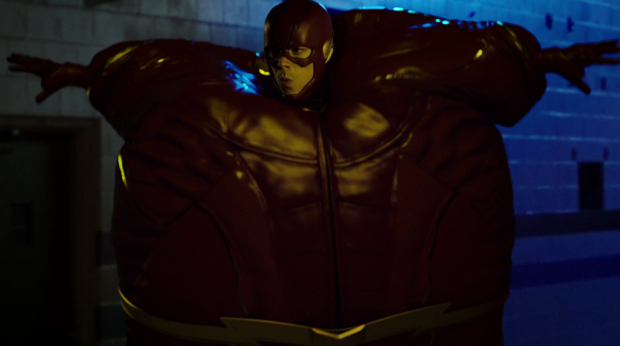 Raft mode isn’t the most flattering

The most interesting thing about the villain is the tease that his powers didn’t come from the Particle Accelerator explosion. He doesn’t reveal where they came from but makes sure Barry is aware that there are others. My money is on the Speed Force Storm at the end of last season being the most likely explanation.

I found all of the features in the new Flash suit to be overkill. I realise that’s the joke but they only seemed to exist to manufacture the problem of it being used against him later in the episode rather than having any practical purpose. The sensors and mapping software seem like good features that should probably stay but I’m glad that Cisco is going to be removing the excess tech. I wonder if this is a response to Spider-Man’s tech based costume in Spider-Man: Homecoming as there were definite similarities.

It may be the early part of the season though it feels like there are very few stakes. The Thinker has appeared twice and each time hasn’t done all that much so the stings at the end of the episode are only serving to remind us that he exists but haven’t provided any real information on who he is. That wouldn’t be a problem if there was any sense of threat during the episode itself but outside of the tension caused by Barry’s wonky suit there really wasn’t any.

This is a new feature that I’ll be including in all of my reviews of The Flash until the problems with this character are fixed. I’m of the belief that the writers aren’t interested in this character and forget he’s there half the time. This episode is a good example of that as he appears in scenes, has a few lines but ultimately does very little. There’s even a scene where Barry shuns his offer of help and leave him in his dust.

He is the one to stop the lethal insulin dose but his contribution is barely acknowledged. In the end battle he is casually knocked out with a single blast from Barry’s new suit and is later seen cowering in the corner. Poor Wally, this reviewer knows you’re alive. 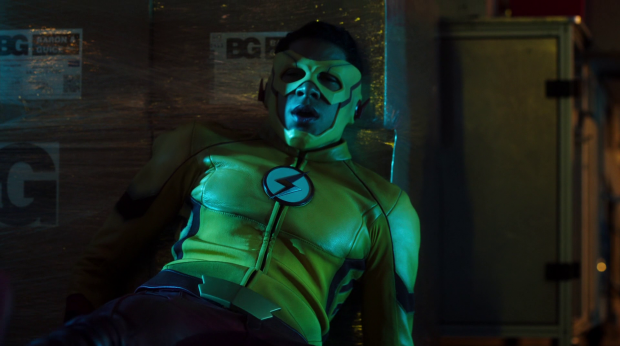 An improvement over the previous episode but still doesn’t manage to get over some of the systemic issues that the show suffers from. Caitlin is still underdeveloped and is back to keeping secrets from her friends, Barry still refuses to listen to Iris which creates unnecessary relationship problems and Cisco is juggling his work as well as keeping a date with Gypsy who is angry with him for doing so. None of these conflicts are that interesting though they are on occasion entertaining despite the fact that they never should have happened in the first place.

Despite that this was the most fun episode we’ve had for a while. It’s good to see Barry being light hearted and enjoying being a superhero again, Cisco is back to his quippy self and even Caitlin joins in on the entertaining banter. The villain was interesting as it’s something the show hasn’t done before though filling Barry’s suit full of tech just so it could be controlled was really contrived. The promise of new villains and a new villain factory is as expected really and something the show needs.