The Flash brings the new Wells into the fold as Barry deals with a rampaging Kaiju along with his difficult co-worker.

This is the mandatory episode where a character portrayed as being unlikeable has reasons for being the way he is. It looked like the episode was going to subvert that trope when Julian shot down Barry’s assumption that there might be a tragic reason behind his dislike for metahumans. Julian considers it a waste of having powers when they are used for personal gain like robbing banks or hurting people and is jealous that he didn’t get powers because he would ultimately use them to benefit the world. 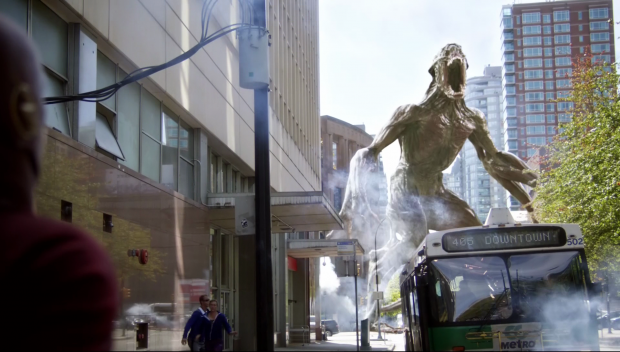 A monster in Central City

Barry’s counter is that Julian might not understand the reasons people have for behaving the way they do and it’s a valid point but the argument isn’t explored in any detail. Julian’s attempted justification that he understands because he struck out on his own from his rich parents to make a name for himself. He is somewhat ignorant of the reasons people have for becoming criminals but his heart does seem to be in the right place.

Amusingly he thinks the police in Central City have become lethargic since the Flash is always on hand to solve any metahuman problems. It would be a valid point if we hadn’t seen plenty of examples where that isn’t the case. The Flash does inevitably defeat metahuman threats but the police have never really been portrayed as incompetent or lazy before now but I can accept that Julian has convinced himself of this.

Barry’s attempt to get to know Julian to end the rivalry is a good idea in theory and I liked that Julian remained resistant to it. Grant Gustin’s performance as he worked through his nausea while appealing to Julian’s ego was spot on and provided a solid comedic moment.

The reversal of Julian’s position on both Barry and the Flash felt really unearned though. It’s framed as if Julian didn’t realise that the Flash protects people. Having the Flash stop Julian from becoming a killer is a solid enough idea but the revelation that Julian has because of this doesn’t entirely work for me. If this had provided a basis for him to question his assumptions over the next few episodes then fair enough but it happens too quickly. Maybe he will get better eventually but this episode did nothing to convince me that I should like Julian. 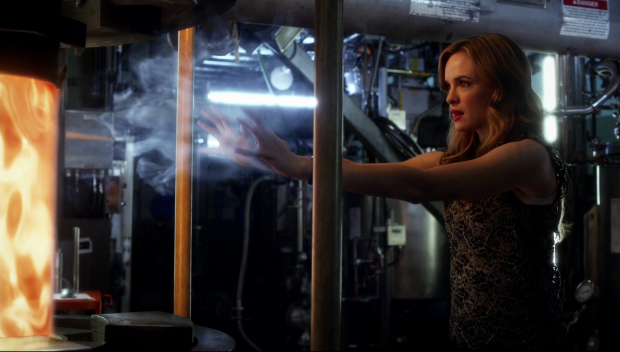 Caitlin tests the limits of her powers

H.R. Wells definitely elevates the episode but only for superficial reasons. He’s far different to the other versions we’ve seen and Tom Cavanagh clearly has a lot of fun with it. The way he rambles on about nothing in particular while people stare on in frustration is really amusing.

The episode cleverly plays with the Harrison Wells trope -if indeed two instances can be considered a trope- where he is obviously hiding something. In this case it’s nothing sinister but his recordings initially hints that it might be. It turns out that he’s a fraud and has journeyed to Earth-1 to get ideas for his next novel. He has no scientific knowledge but considers himself invaluable as an idea man. Does that make him the Steve Jobs of his Earth?

The discovery of this was really well done with everyone slowly realising that he actually doesn’t contribute to the conversation in any meaningful way. In the end Team Flash give him the benefit of the doubt and let him stick around which is fine by me but I can see this becoming tiresome after a while. I’m sure Harry and Jesse will be back before long and this is a nice diversion in the meantime.

Caitlin’s part of the story was the most interesting part this week. It’s rare that we get to see her involved in her own plots and develop independently of the rest of the cast so this was welcomed. Her relationship with her mother was teased last season when Caitlin met her Killer Frost counterpart from Earth-2 so it’s good to finally see this play out. 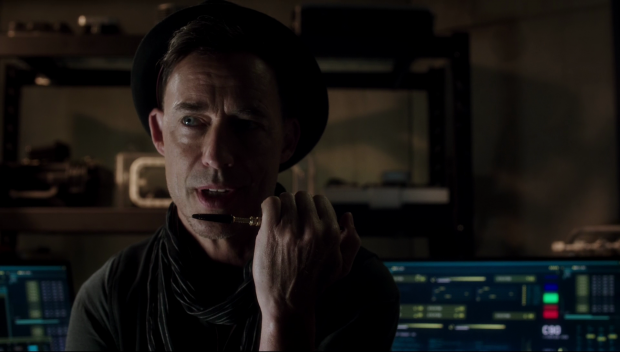 H.R. Wells is hiding something

It’s a strained relationship between Caitlin and her mother, Dr. Tannhauser (Susan Walters) is a tense one because Caitlin essentially abandoned her to pursue her own interests. The blame rests in both directions as Dr. Tannhauser can’t really be described as warm or nurturing. She does what a mother would expect for her daughter but seems to regard her as a scientific curiosity rather than family. Caitlin’s reasons for building her own reputation to stay out of her mother’s shadow can be easily understood but so can the resentment. It’s a really complex relationship and having it play out against the backdrop of Caitlin’s powers manifesting keeps things relevant for her current problem.

Caitlin’s powers are being handled well so far but I’m still unclear on why she doesn’t confide in Cisco and the others. Her talk with Cisco at the end of the episode reminds us how close they are and how strong their relationship is so there’s no reason why she shouldn’t open up to him. Especially since Cisco dealt with a very similar problem last season. Their discussion about failed family relationships is a good one and Cisco’s insight on losing a family member without repairing that relationship has weight to it.

I do like the idea that Caitlin’s abilities are tied to her emotional state and that she is letting them consume her without really meaning to. She causes harm completely by accident in this episode and regrets it but I can see this escalating to the point where she accidentally becomes a villain because she can’t stop herself hurting people. If done right it could be a compelling story but it remains to be seen if it will continue to be as interesting as it currently is. 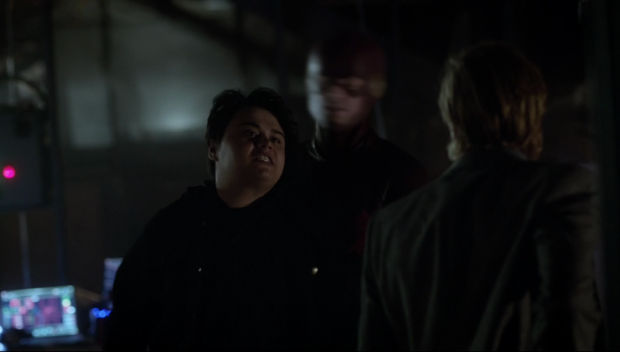 The villain of the week has to be one of the worst on record but maybe that is because the rampaging Kaiju idea ended in disappointment when it turned out to be a hologram. Having an opponent that size does create the logistical issue of how Barry can defeat it but the Empire Strikes Back plan of knocking it over by tying its legs with rope would have been cool to actually see. It might be a bridge too far in terms of budget but the show has accomplished CGI wonders before like Grodd or King Shark.

Having the monster be a hologram generated by a high school kid who was sick of being picked on and wanted to feel powerful for a change was a bit too Scooby-Doo for my liking. It’s a good idea on paper but it just feels off when presented on screen. I’m even more surprised that nobody made the Scooby-Doo connection. Usually Cisco is right on that.

A bizarre episode that has some good moments but loses points because of sheer lunacy. The strongest scenes were Caitlin attempting to reconnect with her mother while studying her powers. It’s a complex relationship that is very well handled and doesn’t offer any easy answers. I’m still not sure why Caitlin doesn’t confide in her friends but so far I like how this has been handled. The attempts to develop Julian are very mixed. On one level it’s interesting to see that he has a black and white view of how people should behave with powers but on another level the attempt to humanise him and make him seem not as bad as we thought doesn’t really work.

H.R. Wells is still good fun and I like how the episode plays with the hidden agenda aspect of the previous versions. He might get tiresome eventually but so far he’s a fun addition to the cast and allows Tom Cavanagh to play a very different character than he usually does. The villain of the week was the worst yet despite a cool looking holographic Kaiju. The twist is a little too Scooby-Doo and doesn’t really work.