The Flash deals with Barry training the latest addition to the team when another Bus Meta makes their presence felt in Central City.

Barry has found a new project in Ralph Dibny. He has taken it upon himself to turn an arrogant, self obsessed chauvinist into a hero and it’s an uphill struggle. As the episode opens Ralph doesn’t take anything seriously and struggles with the concept of helping others. He has spent so long looking out for only himself without any empathy for others that helping people doesn’t even cross his mind. 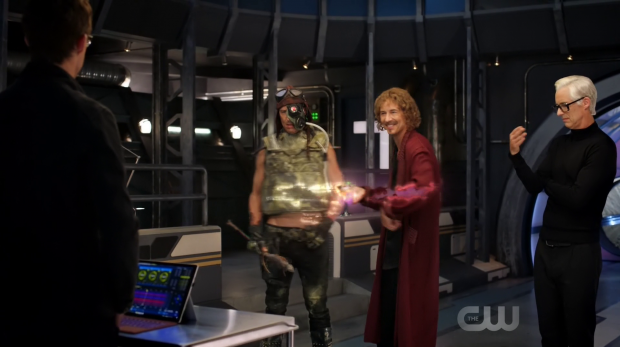 The Council of Wells

This is one of the major sources of tension in the effort to bring down Mina Chayton aka the Black Bison (Chelsea Kurtz); or at least it’s supposed to be. I’m fine with it on a conceptual level as not everyone is innately heroic or selfless so the idea that someone has to learn that protecting people is the most important aspect of the superhero gig is a good idea. The problem is that the execution was so clumsy with Barry being so easily incapacitated despite the fact that he is supposed to heal a lot quicker than he does when knocked around. Given his speed he should have no problem stopping Mina and saving the people she puts in danger but Ralph needs to learn a lesson so Barry’s powers are effectively neutered for the purposes of this episode. Arguably Barry could be taking a step back and having faith in Ralph to do the right thing but that’s not what goes on either so the whole thing is a convoluted mess.

There are other problems with Barry in this episode. First of all he uses his speed to take a mugger to hospital when not in the Flash costume and later in the episode Barry and Ralph visit the injured girl in plain clothes despite them being in costume when the incident happened. B

A turning point for Ralph comes when his decision to focus on catching the criminal results in a young girl being injured. It’s about the most obvious and manipulative thing the writers could have done to make the point but it does work from the point of view of forcing a change but it is completely lacking in subtlety. Hartley Sawyer’s performance in the scene where Ralph reflects on the blunt realisation of the potential human cost to his decisions. It’s another example of the cast elevating mediocre material that gets the point across in a really obvious way. 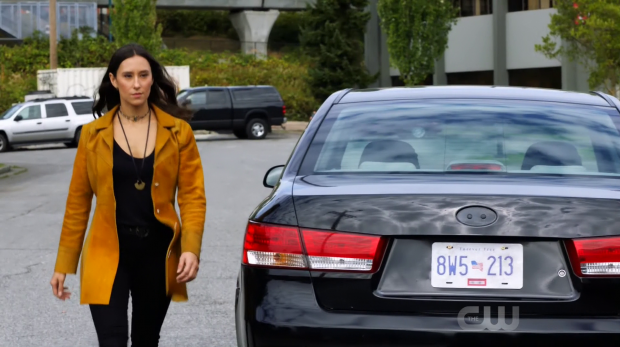 Mina aka the Black Bison strikes

The characterisation of Ralph in this episode is bafflingly tone deaf. It feels like the script is trying too hard to create comedy for one thing which isn’t a reflection on the ability of Hartley Sawyer who has proven himself to be amusing in previous episode but there’s something really overt about the way it comes across here. There are some laughs now and again but most of the jokes don’t land and watching any scene he appears in is an exercise in frustration. Even worse is his attitude to women shown by him referring to them by their measurements in a casually offensive way. It isn’t taken seriously and it has previously been established that Ralph tries to be a bit of a ladies man but it’s far too sleazy for my liking while being casually brushed aside. He also has the worst costume that has ever appeared on this show though hopefully it’s a prototype that will disappear very soon.

Mina is a fairly underwhelming villain and there are issues with sensitivity considering her Native American heritage. The episode handles it really badly in the subtext by having white men telling her that cultural artefacts belong in a museum. There is a half baked attempt to explore the historical side of Native American culture and their place in the United States but it’s so flimsy that it might as well have been left out.

She did have a really cool power that created some impressive visuals with the notable highlight being the T-Rex skeleton in the final action sequence allowing for quoting Jurassic Park and for Ralph to complete his journey towards realising the importance of altruism. 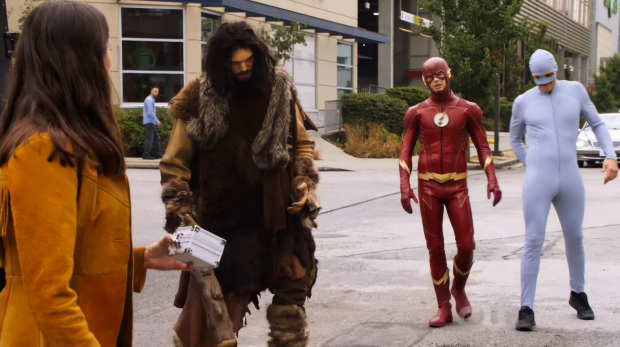 The lingering threat of the Thinker is furthered in a subplot featuring Harry and Cisco. They need to narrow down the abundance of DeVoe’s to find their enemy and to do that Harry comes up with the idea of bringing in some extra help. He reaches out into the Multiverse and comes into contact with other versions of himself to help work the problem.

In theory this is a great idea because Tom Cavanagh is great at playing different versions of the same character so seeing more of that in action seems like it will be a positive thing. The practical result is far different as the other versions of Wells come across more like caricatures than anything else. We have an arrogant German scientist, a lothario and a Mad Max style post Apocalyptic with a very brief appearance from a Gandalf style Wizard. There’s nothing to these characters other than their defining features which makes this feel like a wasted opportunity.

There is a potential problem with the Council of Wells on a conceptual level. Now that it exists as a resource what will be the excuse for not using this every week? It could also go too far in the other direction and become a crutch that the show leans on. Either way it will likely be mishandled. 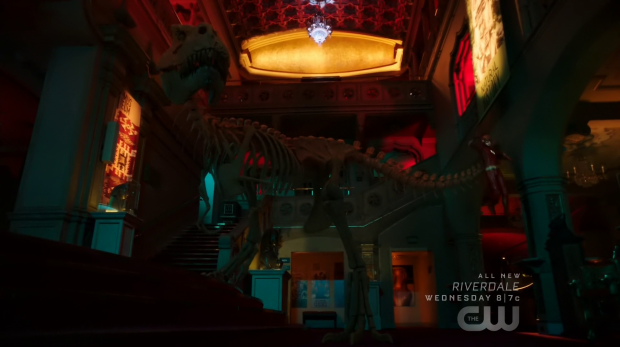 Night at the Museum

Despite this, Cisco and Harry deliver most of the episode’s genuine funny moments. Cisco pointing out how ludicrous it is for Harry to take his advice to make friends and find other versions of himself. Harry sees them as different people but part of the point of these scenes is to prove that across the Multiverse the core person is the same. It’s funny to think that the only person Harry sees as worthy of his friendship is other versions of himself though it also plays into something the episode tries to make a serious point about.

Harry is filled with self loathing which makes people react negatively to him. Basically he’s abrasive so people are abrasive back to him and it prevents him from making meaningful connections. Cisco suggests that he has to find a degree of self respect before others will respect him and this pays off with him treating the other versions of himself with that respect which then gets the intended results.

All of this is fairly uninteresting but lets Carlos Valdes and Tom Cavanagh play off each other which always makes for fun viewing. I just wish that a better use for the Council of Wells had been found rather than -admittedly entertaining- one note caricatures. 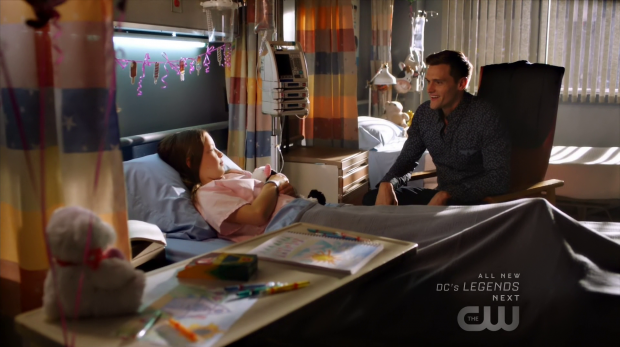 The end result of their efforts does make for a reasonable cliffhanger and a shift in approach for Team Flash. Narrowing down the results to the right DeVoe allows the team to be proactive for once and take the fight right to their enemy before the situation inevitably escalates. This shows that some lessons have been learned from the past and that Barry is willing to take the initiative when information is presented to him. This is all positive and goes some way towards making up for mistakes the writers have taken with the show in the past.

Naturally it can’t be as simple as finding the villains secret lair and bringing him to justice. With them living in a -somewhat- real world there are rules to follow and they need proof. This isn’t what they get when arriving at DeVoe’s house as he seems to be a normal guy in a wheelchair. I liked this reveal because it adds some humanity to DeVoe and creates intrigue as to what more there is to him.

He’s still missing but I feel like it’s worth continuing this feature. Barry taking responsibility for training a new hero is reasonable enough but I can’t help but feel that many of these story beats could have been used in Wally’s training. Wally and Ralph are very different people but many of the lessons could easily be applied to him. Ralph’s training isn’t especially well developed but it has more attention than Wally’s ever did so it deserves a mention that Wally could also have been used instead. 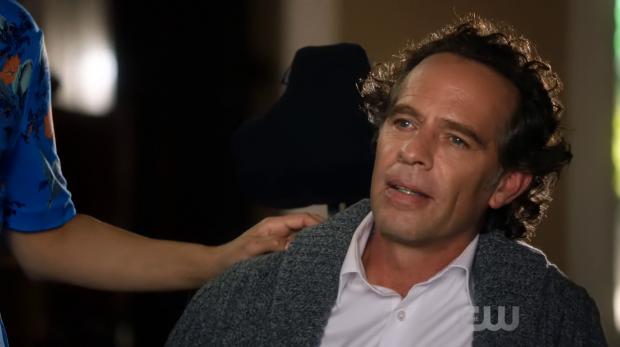 An underwhelming episode that tries too hard to be funny while failing to deliver anything meaningful. Ralph is a poorly used character in this episode thanks to his casual and uncomfortable chauvinism though he does have a handful of endearing moments such as his reaction to being indirectly responsible for the injured child. It’s very on the nose but represents a harsh lesson being learned and illustrates Barry’s points about what it means to be a hero. Unfortunately the execution of this is all over the place as Barry finds himself effectively neutered so that Ralph can be in a position to solve the problem. Barry’s speed should have been more than a match for the problem.

The villain was underwhelming though had a cool power that allowed for some entertaining set piece moments. With the villain being Native American unfortunately the subject of cultural heritage is handled with a lack of sensitivity and would have been better left out entirely. The Council of Wells was a reasonable idea in theory but the execution left a lot to be desired. The alternate versions of Wells were 1 dimensional caricatures and Harry’s arc was somewhat lacking though it does allow for some fun interactions between Cisco and Harry. I found the cliffhanger ending to be effective as it shows growth in Barry as a character and willingness to be proactive rather than reactive. Seeing DeVoe as a normal guy in a wheelchair is an impressive twist as it adds layers to him as a character while deepening the complications for Team Flash.