The Gifted makes use of Lorna being back in the fold as the Mutant Underground try to figure out their next move.

Prior to this episode we have seen barely any of how Lorna fits into the group dynamic. We know what others think of her and have a very clear sense of her relationship with Marcos but what she brings to the group has been something of a mystery before this point. 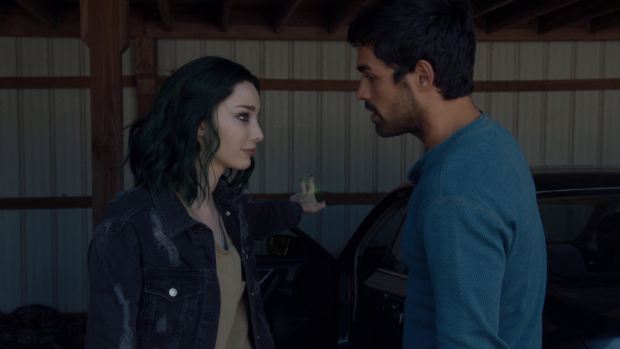 This episode doesn’t supply answers to that right away either because the focus should rightly be on Lorna and Marcos reunion. They have a lot to talk about since they last saw one another since they have a baby on the way. As they travel together they have an innocuous discussion about what to call the child when its born and use the dialogue to establish that Lorna has a deep connection to the unborn child that combines motherhood with Mutant awareness. This show is very character driven and moments like this are what makes it worth watching. It helps that Emma Dumont and Sean Teale have such effortless chemistry adding so much depth to all of their scenes.

Lorna and Marcos’ journey together also allows for some action. The most impressive was them working together to take down a Sentinel Services Drone that was on their tail. It was too far away for Lorna to use her magnetic powers -which establishes a clear limitation for her otherwise devastating power- so she uses them to float a mirror that Marcos uses to reflect beams of light that destroy the Drone. It’s a clever use of the two sets of powers and clearly shows how naturally the characters work together. It’s also a really interestingly shot scene as there is no real spectacle involved with much of the destruction happening off screen leaving the camera to focus on the characters in the car. This show isn’t about the powers it’s about the people who use them and scenes like this remind the viewer of that distinction.

Spectacle does come into it when Lorna effortlessly disarms their pursuers in order to take Turner hostage. It’s a quick scene but also shows how practiced she is in using her powers and how effortless it is when she is unrestrained.

The scene also tells us a lot about Lorna as a character. She is very much a no nonsense type not afraid to use her powers in a way that others might find terrifying. Marcos would rather they don’t take the risk but Lorna doesn’t see any danger because the forces they are facing are inferior. It’s not explicitly stated that this version of Lorna Dane is the daughter of Magneto but there’s a sense of the unswerving confidence associated with that character in Lorna so it’s likely a reference to her parentage even if the show doesn’t go down that route. 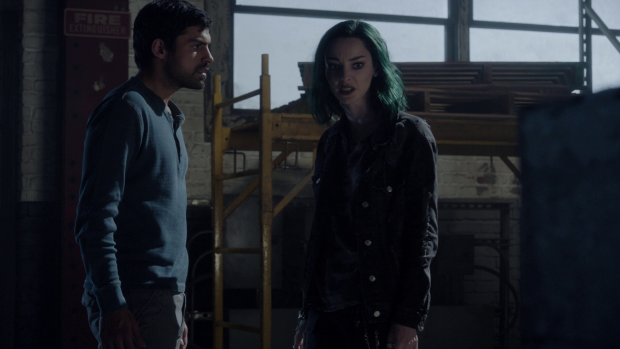 Lorna’s reason for capturing Turner is to interrogate him about what happened to Pulse. It’s a fairly brutal interrogation in terms of how unsympathetic Lorna is. It fits because she has no reason to be after the way this man has personally treated her before now. She’s dismissive of his answers and not shy about threatening him with more violence which again references Magneto’s personality.

The interrogation also provides a reason to reference the events referred to by the characters as 7/15. This serves as a turning point for both sides in the Mutant/Human conflict and is fleshed out a little by the flashback opening showing Turner having a picnic in the park with his family before a Mutant rights rally escalates horribly resulting in many deaths including Turner’s daughter. This provides him a clear motivation though seeing the event adds very little to the mythology of the show or to Turner as a character as it just reminds us of information about him we already know. 7/15 is seen as a turning point for both sides as it is what started to the zero tolerance approach to Mutants.

Ultimately the exploration of this as a motivating factor for both sides of the conflict is fairly uninteresting. The usual platitudes come out such as it being the actions of a few who don’t represent the opinions of the many. It’s a fair statement and relatable in terms of what goes on in the real world but there’s nothing more to it than that; at least in this episode. Having the statement come from one of the non white characters does carry some weight to it though as it broadens the representation and strengthens the message.

Dreamer has a big part to play in this episode. Clarice finally confronts her about implanting the false memory of John into her brain in order to force a connection between them so she could control her powers. The scene plays out pretty much as expected with Clarice being angry and feeling violated that this was done to her without her consent. Dreamer is apologetic but doesn’t regret what she did as she felt it was necessary. She even offers to remove the memory as if that is all that is required to fix the problem but Clarice refuses to let Dreamer mess with her head again. It’s a good heated discussion and Jamie Chung plays her part really well. Elena Satine doesn’t come across as well by comparison but perhaps her character is supposed to come across as detached considering her ability. 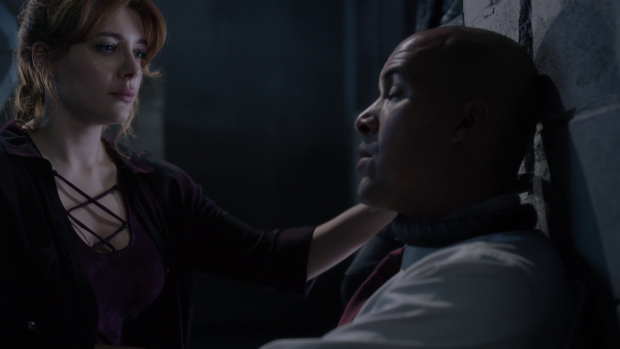 She also uses her power on Turner in an effort to learn more about what happened to Pulse. Probing his mind does provide some of the required information but it’s completely open to interpretation. There’s a mysterious symbol that will become important and a site that Reed knows almost nothing about so there’s a solid mystery to contend with now that we’re in the second half of the season. It’s good that there’s a sense of plot momentum while the character work remains the focus.

Dreamer using her powers on Turner has a really brutal consequence. He has forgotten about his daughter’s death so returns home to his wife looking for their daughter as he no longer remembers what happened to her. Not only does he have to relive that grief as if for the first time but his wife Paula (Frances Turner) has to go through that with him. No matter what he has done this is something undeserved and it suggests that Dreamer has little concern for others considering how freely and carelessly she uses her powers with no thought to the consequences.

Reed is making for an interesting addition to the group because his presence automatically creates friction. This is best shown through Tex/Fade (Jeff Daniel Phillips) who is very quick to out Reed as the man responsible for prosecuting many of their kid. The reasons for the animosity are obvious and there is the potential for some of the Mutants to doubt the leadership of this group for colluding with a former enemy.

This makes Reed’s arc in this episode about redeeming himself and proving his usefulness. He is more than happy to do both of those things and offers himself up as bait for the police while providing information on the tactics used by Sentinel Services and generally freely giving information as requested without a second thought. It’s enough for Tex to gain some respect for him by the end of the episode while still leaving that friction between them that will keep their interactions interesting as the episodes progress.

The other Struckers have less to do as they work to make sure that Harry/Trader doesn’t die. It involves a blood transfusion from Andy who is a universal donor and Lauren helping to apply pressure to bleeding wounds using her powers. Meanwhile Caitlin is tasked with removing the bullet. It’s all necessary plot movement but the characters could be better used. I do acknowledge with an ensemble cast there are bound to be characters used less effectively than others but it still stands out when less meaty material is given to some of them. 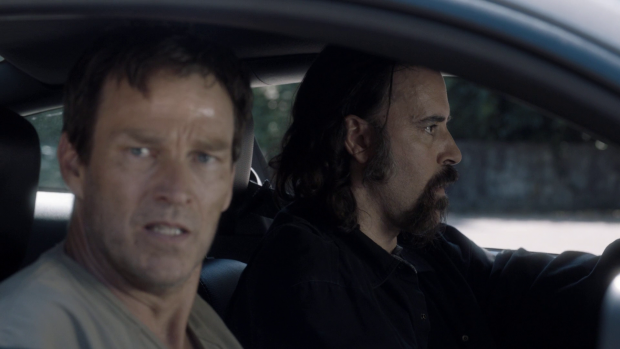 An excellent episode that makes good use of Lorna being back in the fold and takes the time to focus on her relationship with Marcos. The scene where they work together to bring down a drone shows how much they compliment one another while keeping the attention on them and even revealing a limitation to Lorna’s powers. It’s densely packed and very well done. We also get a sense of Lorna’s personality when she takes Turner hostage and shows him no mercy when interrogating him. Marcos doesn’t completely agree with what she’s doing which again delivers important insight into their relationship.

Dreamer’s use in this episode was well handled. The way she casually uses her abilities without consideration of the consequences shows a lack of concern held for anyone else and a sense of comfort with doing what she feels is necessary. Clarice confronting her about the implanted memory of John was a well done emotionally charged moment that highlights how much of a violation this was. Reed makes for a good addition to the group and sets about proving himself despite the friction felt by the Mutants he was once responsible for prosecuting. Sadly the rest of the Struckers are used less effectively but it’s a small weak point in an otherwise well done episode.