The Gifted splits off the various stories and explores different schools of thought on what it means to have powers.

Differing opinions on what to do with Mutant powers is among the bread and butter of the X-Men franchise. In its purest form we have Charles Xavier who believes in peaceful coexistence and that powers allow Mutants to feel comfortable in their own skin. Magneto is the alternate viewpoint with his belief that Mutants are superior and deserve to use their powers to take their rightful place as the dominant species on the planet. Both arguments have merit and it’s explored in various ways in both the films and comics. 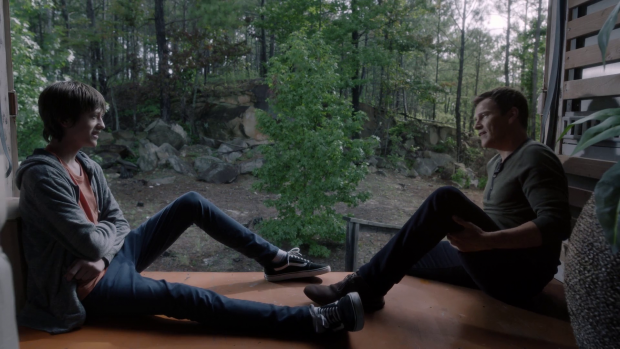 This episode distils that debate into something a little less grandiose. Lorna -who is possibly Magneto’s daughter- believes that Mutants have to learn how to defend themselves so has a singular view on what their abilities should be used for. In her head they are at War and they are fighting for survival so preparation is key. Lorna’s attitude is reflected through how she uses her powers when taking on the humans. She’s confident, focused and fully connected to the emotional weight of the situation because that’s where her power comes from. Emma Dumont’s facial expression says it all when she uses her powers and her line delivery is very similar to that of a military general showing that she is fully committed to her own way of thinking.

The counter to that comes from Caitlin who speaks out against her harsh training methods. It’s not the best visualisation of how young Mutants could be trained as it basically amounts to Lorna throwing things at kids and encouraging them to stop. Being in real danger of harm is fair enough in terms of honing skills but starting them off with that part of the training is a bit extreme. Caitlin intervenes specifically to protect Lauren from having a saw thrown at her face. Lauren is definitely in a good position to protect herself based on what we have seen so far but that’s besides the point when it comes to what this training represents. As far as Caitlin is concerned Lorna is putting kids in danger because it’s unclear before beginning the training whether they can control their powers well enough to deflect the dangerous objects being thrown at them. In essence Lorna has forgotten that Mutants are also human and not all of them can be moulded into soldiers as easily as she was.

There’s also a bit of PTSD at play here which makes sense given that Lorna spent about half the season locked up in prison with no hope of escape. Being back among her friends is likely to be something that requires adjustment and Emma Dumont’s performance is unhinged but not to the point of her breaking down completely. 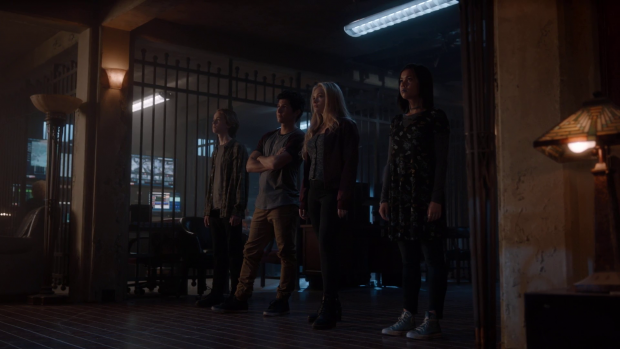 Welcome to the Danger Room

Caitlin has a vested interest in teaching the younger Mutants as well though her approach is far different. Her reasoning is more personal as it starts to sink in that her children won’t be able to simply go back to school so any hope of an education is over with. She sees that the situation is similar for many of the younger Mutants so starts to collect material to run her own school within the Underground. It’s a noble ambition and reminds the viewer as well as the characters that holding on to some semblance of Humanity is crucial otherwise survival comes at too high a price.

This conflict also plays out when Reed and Marcos take Andy on a mission with them. Reed’s perspective is very much that of a concerned parent who doesn’t want to willingly put his child in danger no matter how willing he is to take risks. The role of a parent is to protect their child so Reed is torn between his desire to keep Andy safe and the needs of the mission at hand. There’s also plenty of friction caused by Andy thinking that his parents want to control him and keep him from reaching his full potential. It’s a very teenage overreaction and works well enough in context. Percy Hynes White does enough to seem petulant without taking it to the extreme and there’s a growing sense of frustration to the character suggesting that his tolerance for his current situation is reducing.

Andy and Reed are able to have a conversation to get everything out in the open. It’s clear that the Strucker household was less than idyllic and that Reed’s commitment to his work meant that his relationship with his family suffered. Andy felt neglected and alone which made his bullying problems worse. He felt that Reed wasn’t someone he could approach because he was never home to be involved. Reed is apologetic and wants a second chance at the relationship. It’s all pretty standard father/son dynamic stuff but it’s well handled and very well performed so it hits the right emotional beats. It’s clear from a later conversation that there is still work to be done here in repairing the relationship so it’s good that a meaningful chat isn’t enough to fix everything. 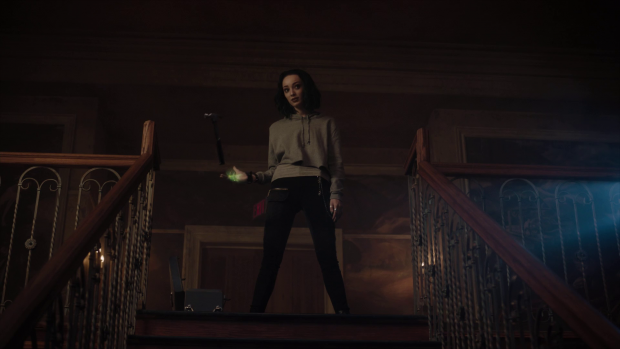 Another opportunity brought on by these characters being together is allowing Marcos to air his misgivings about being a father. As with the Andy/Reed conversations this is all pretty standard stuff where Marcos barely knew his father and Reed tries to be a good father in spite of his own. The conversation is all designed to make Marcos feel better about his upcoming fatherhood and give him hope that not having a positive role model won’t affect his ability to be one. Once again it’s predictable but enhanced by the performances.

Reed and Caitlin’s husband/wife dynamic gets some air time as well though there’s nothing definitive here other than the fact Caitlin seems a little upset that Reed has lost his wedding ring even though it wasn’t his fault. The fact that their relationship hasn’t really been shown at all is addressed in the form of them not having a chance to talk and the acting shows the collective strain this has on them. Reed is fully committed to the mission he has given himself while Caitlin wants to make herself useful in some way so there’s little time for their relationship. It doesn’t go anywhere but may be laying the groundwork for further development.

Consequences to Dreamer’s violation of Clairce’s mind reach a melting point here when she confronts John about how difficult it is living with the memories she shouldn’t have featuring him in a romantic situation. She is further confused by the sexual tension between them last week and decides to leave to remover herself from the situation entirely. She feels uneasy around Dreamer and uncomfortable around John so can’t be around either of them. This is combined with the fact that she is starting to feel like she is being used for her powers because they are the most useful for infiltration missions. Dreamer’s actions have convinced her of this because she was manipulated so that her powers would go stronger and prove useful at the right moment. Her humanity wasn’t really considered at least as far as she’s concerned and it’s impossible for her to be around people who could do that to her. 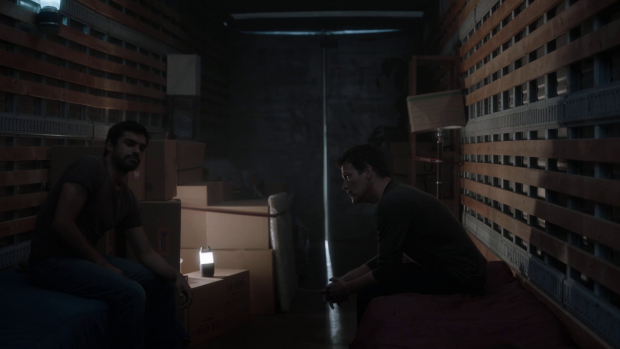 I highly doubt Clarice’s story ends here but her arc throughout the season continues to be interesting. The idea that forcing her to forge connections with others is what prevents her from truly connecting is a fascinating paradox that the show handles very well.

On first glance it looked like this episode would be a John episode and his presence here is significant. We are given some insight into him with the flashback opening showing him trying to raise money for the victims of the now famous 7/15. He attracts attention from people who disapprove and the situation escalates. This scene tells us a few things about John but the most significant is the sense of betrayal he feels from the way Humans treat him. He mentions that he fought for them as a soldier and receives nothing but persecution in return thus extending the Mutant metaphor to War Veterans mistreated by those they were trying to protect. It’s a very small thing but it’s some insight into how John sees the world.

The rest of the episode portrays him as being somewhat aimless to the point that he is easily manipulated by Dreamer into hooking up because it’s ok to give into passion during a War. It’s clear he isn’t comfortable with it but he also defers to her forcefulness. This aimlessness is interesting though somewhat at odds with the other stories going on though it’s difficult to tell the difference between foreshadowing and filler on this show. It does certainly seem like Dreamer is far more dangerous than John is aware of.

Lauren’s contribution other than almost having saws thrown at her is a bit of a meet cute with Wes (Danny Ramirez); a Mutant around her age with the power to create mirages. At first he comes across as smarmy and inappropriate which Lauren is resistant too and eventually she warms to him suggesting that a budding romance is on the horizon for them. It may seem perfunctory but it’s actually an important Human moment as Lauren has someone her own age that she can talk to who understands what it’s like to be plucked out of a normal life and thrown into the Mutant Underground. She handles it well though she also needs someone she isn’t related to just for the sake of different conversations and so far Wes provides that. 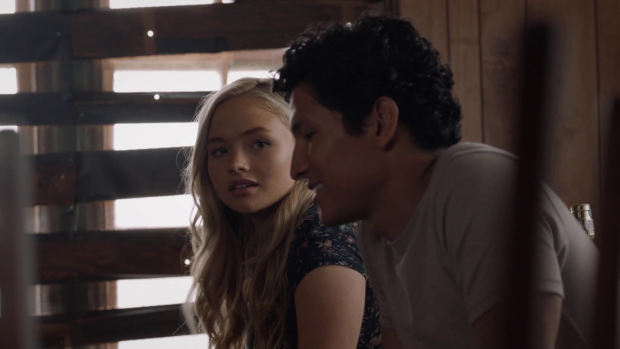 Another intriguing episode that allows the various character dynamics to develop in different ways. This episode allows for the exploration of Reed and Andy’s relationship which follows predictable lines in terms of what their issues are but holds up well thanks to the acting. It also allows Marcos to air his concerns over becoming a father to Reed who experienced the same trepidation before becoming a father himself. Again, very little new here but well done thanks to a talented cast. Reed’s dynamic with Caitlin is also allowed some time to shine but doesn’t really go anywhere which seems to almost be the point but still feels unfinished.

Lauren is allowed a solid interaction with new kid Wes who represents someone her own age that she can bounce ideas off. They have similar experiences so get along easily and it’s important for her to interact with people her own age that she isn’t related to. Lauren also becomes Caitlin’s main motivation to call Lauren out on her extreme training techniques which allows the episode to explore the differences in approach from them. Caitlin wants to give them an education and Lorna thinks they should be ready for a War. The truth is somewhere in-between but it shows the sort of life Lorna has had. The John, Dreamer and Clarice dynamic continues to be fascinating as Clarice leaves once she decides she can’t deal with the violation and refuses to be around people who did that to her. John is generally aimless in this episode and it seems that Dreamer might be more of a problem than he thinks she is.