The Gifted expands the character relationships by building on the revelations dropped in the previous episode, another heist and more Mutant family drama.

The events of the previous episode involved Reed finding an awful lot about his family and personal history. Much of this is referenced in a conversation between Raid and Caitlin where he tells her everything and she repeats it as a handy catchup method for the audience. This serves the character purpose of Caitlin trying to wrap her head around it all. Finding out that her husband should be a Mutant but had horrific experimental procedures carried out on him to suppress the X-Gene is a lot to take in. 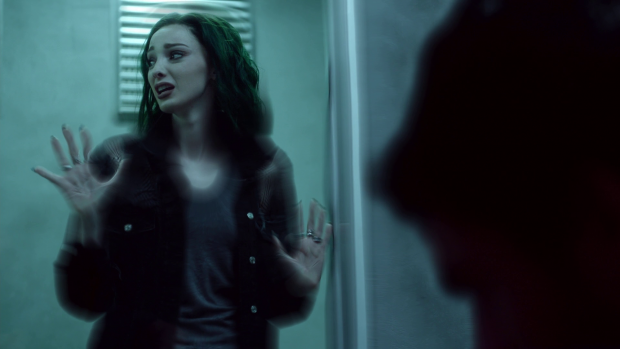 She naturally feels for Reed who has been effectively living a lie for his entire life with essential knowledge kept from him. It’s not something that can be dealt with or resolved in a single conversation as it’s a raw emotional wound that they need to work through together. It’s a great scene showing the depth of their husband/wife relationship.

Their discussion naturally brings them onto the Fenris twins and the fact that Andy and Lauren have the same powers which naturally leaves them curious. They decide on the healthy approach of dealing with it as a family by being upfront about it and encouraging Andy and Lauren to test combining their abilities.

It doesn’t work at first creating a rare comedic moment in this really serious outing. Lauren comments on Andy’s sweaty hands delivering a quick yet effective character beat reminding the audience that they are brother and sister. Part of what makes the family dynamic so believable is little moments like this that enhance the relationships in very real ways. 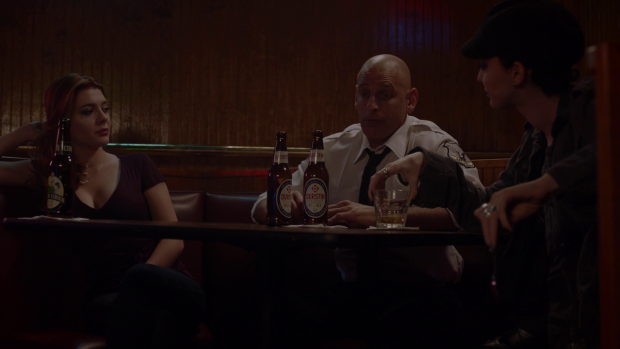 The art of seduction

The next attempt is far more successful and the world seems to almost literally melt away for them as their powers combine to the point that their perspective aligns and it feels like almost anything is possible. It appears to be escalating before Reed puts a stop to it and the rest of the episode is spent reflecting on it.

Interestingly the reactions are counter to what would be expected based on the characters as they have been established. Being teenagers they are both fascinated by the new experience and are curious to try it again but there are differences in the way each of them see it. Lauren admits that having access to that level of power made her feel good and she wants to try it again. Andy is almost the opposite as he leans into his fear of the unknown which is unexpected given his propensity to react more violently to situations.

It’s clear that tapping into their true potential was a transcendent experience for each of them which has them conflicted been curiosity and terror. There are hints at their potential to become like the Fenris twins and how terrifying that prospect is which suggests an upcoming nature vs. nurture debate related to these characters. I can see how the nature angle will be explored as the notion of having so much power would naturally be seductive. 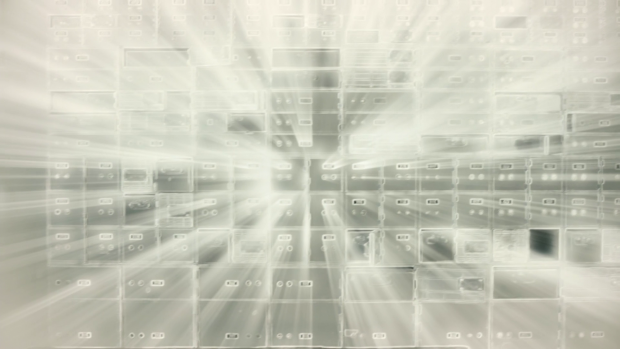 There is some exploration of this debate later in the episode when they are faced with the choice of either using their powers or being captured by Sentinel Services and Andy makes the choice to be captured rather than likely kill their friends in the building with them. This is a clear victory for nature though Lauren expresses anger that Andy stopped their connection so it’s possible that both sides of the debate will be embodied by these characters each taking distinct sides.

Much of the rest of the episode involves a planned heist on Trask Industries in order to save Esme’s family. For a character so new to the show she has shot to prominence very quickly and certainly seems very forceful when it comes to getting her point across. This isn’t a bad thing but it’s pretty jarring as she appears to be forcing her way into the overall dynamic.

I suspect that much of this is deliberate given that she’s a telepath and has a very clear objective in mind. It’s surely no coincidence that Lorna experiences a harrowing nightmare of Markos and her baby being locked up in a facility while she is powerless to help them. To me it comes across as a powerful incentive for Lorna to consider what Esme’s family might be going through in an attempt to encourage her to sign off on the mission to save them. 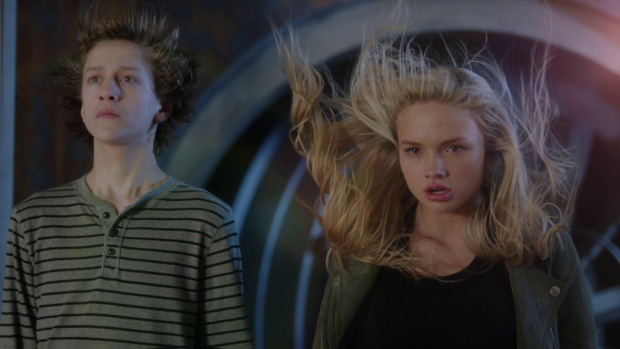 There are other clues throughout that Esme is manipulating people for her own ends and it’s reasonable to assume that she would get away with it since her ability would allow her to do that. There are also hints that she might be working with Trask Industries such as her almost dropping the detonator in a way that looks like an accident. She may not be working with them willingly as it’s possible that she is doing so because she has been promised that her family wouldn’t be harmed. Despite how obvious her manipulation of the others is I’m glad that not all of the questions have been answered at this point.

The build-up to the heist was handled really well with a good use of both Sonia and Lorna in their information gathering mission. Using their feminine wiles to gain information from a Trask Industries security guard may seem like an obvious plan to be carried out by two attractive women but it is played well by Emma Dumont and Elena Satine who both come across as disarming yet driven. Lorna’s impatience and tendency towards violence for results is completely preserved when she bends a spoon to make knuckle dusters and knocks him out. It’s a small scene with the obvious purpose of gaining information but it’s also really effective in showcasing how the personalities of these characters combine with their abilities to get the desired result.

I really enjoyed the heist on Trask Industries. It’s one of these multi part plans that The Gifted has used a few times in its short run. They all differ but are more variations on a theme but fit into the idea of an ensemble working together to achieve a common goal. This particular mission has various characters performing different functions before it all goes wrong shortly before the end of the episode. Naturally

it goes spectacularly wrong to the point that some characters are definitely captured, others have more uncertain fates and the rest are free to pick up the pieces when the show returns in January. 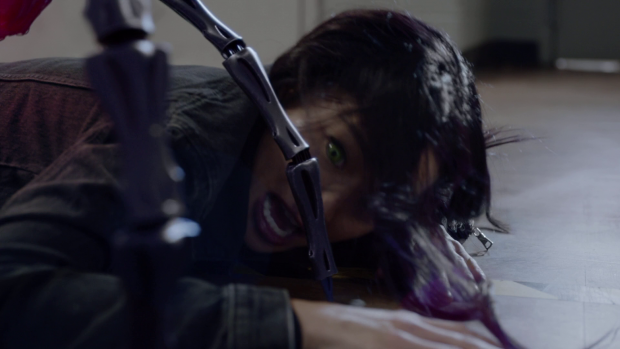 Great, how do we get in and out of places now?

The sequence itself was very well put together with a clear purpose for everyone involved, a nice character moment where Markos and John reminisced about how he would handle the situation as a reminder of what has been lost as well as what they’re all fighting for. The stealth approach created natural tension as there was always the fear of discovery and the way characters reacted to when they were discovered felt true to them. Having it go wrong felt organic as well as it happened at natural point to ramp up the tension appropriately.

Andy and Lauren being captured is a really good setup for the January episodes as it gives Reed and Caitlin something to feel really guilty about. They let their children be involved despite how young they are so I dare say they will torture themselves over this and be very determined to save their children to the point of recklessness. Reed’s former connection to Sentinel Services and Turner in particular will likely come into play here in some way though there are many possibilities as it’s unclear how well Turner knows Andy and Lauren though the dialogue suggests that he has more than a passing familiarity with them.

Clarice is also captured which automatically forces the characters -and the writers- to think laterally about how to handle the problem. Her limitations were clearly established for this particular mission which added to the difficulty but the fact that she isn’t a resource to them at all will force the situation to be handled differently and that’s something that should be interesting to see.

Despite how well handled much of this episode was there was a clumsiness to it that I couldn’t quite place. The various plots didn’t feel all that closely connected until they converged at the end of the episode and there were serious pacing problems in the early part of the episode. Focusing on character relationships is definitely a good thing but in this case it comes at the expense of the movement of the story meaning that much of the episode felt like it was failing to get started. 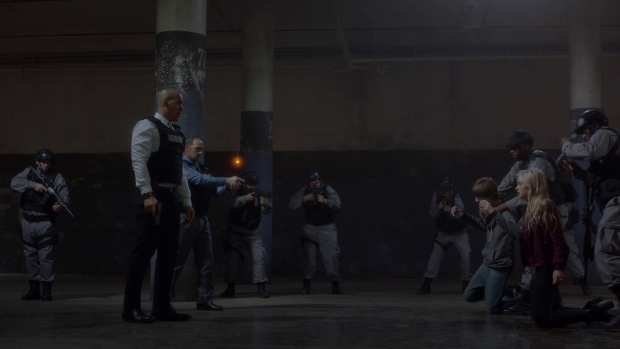 That could have gone better!

A solid episode that suffers from pacing problems but does a good job with the characters. Lauren and Andy’s reaction to the knowledge that they are incredibly powerful together was handled really well with a reversal on the expected reactions it. From what we’ve seen so far it looks like Lauren will embody the nature side of the debate with Andy representing nurture. Reed and Caitlin processing what was learned in the previous episode is also capably handled. It isn’t resolved because it can’t be but plays out like a husband and wife supporting one another.

Esme’s insistence that they go on a mission to save her family seems like pretty obvious signposting that she is using her telepathy to manipulate people into doing what she wants though it makes sense given the context. It’s unclear why she’s doing this so there’s still enough mystery there. The build-up and execution of the heist was impressively done with characters playing to their strengths and an appropriately hopeless conclusion that leaves things on a compelling note before the show’s return in January.