The Walking Dead continues the trend of hopping between locations and factions. It’s time to catch up with Morgan and the people of the Kingdom.

‘Bury Me Here’ was about bringing the Kingdom into the fight that is to come. I can understand Ezekiel’s position of not wanting to fight the Saviors as the arrangement they have seems to be working pretty well for them and it is up to Ezekiel to keep his people safe. 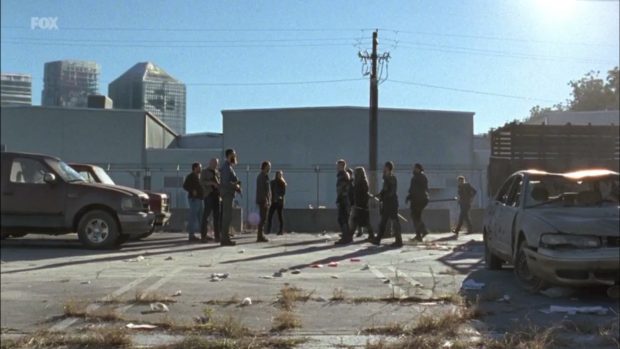 The Kingdom paying their way to The Saviors

Ezekiel is very much a pacifist at heart from giving up his guns with little resistance to not defending his people when Benjamin is shot over a missing cantaloupe. Ezekiel is very much a man who can deal with smaller scale problems like the garden being infested and making a choice to destroy it to save the crops but when it comes to difficult decisions he is somewhat lacking.

Even after Benjamin’s death he seemed to want to go back to the status quo which really shows where he stands in terms of fighting. It takes a push from Carol to finally make him see they need to join Rick and Alexandria in the war against Negan and the Saviors.

The Saviors were a small part in the episode but deserve a mention as the character or Gavin although we know he is one the bad guys he didn’t seem like an awful man he was there to do a job and did it. It was easy to tell he was angry at Jared’s foolish decision to shoot Benjamin. 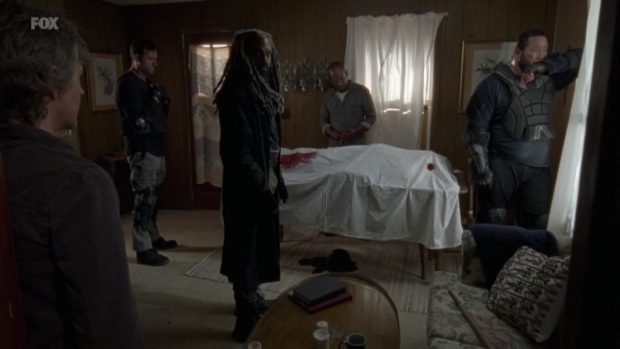 The consequences of Richards actions

When they come back later on to collect and find out that Benjamin had died you could tell he felt remorse and the fact he was willing to kill Jared if he said anything shows that not all the Saviors are bloodthirsty psychopaths. It is worth noting that some of the Saviors are just surviving like everyone else.

We have known for a while now that Richard has been trying to start a war with the Saviors to force Ezekiel into fighting, from his plan to attack a Saviors convoy to trying to recruit carol and fight with Rick. This week however he went one step further and planned to die for his cause however he plans things they never seem to work out the way he wants and results in Benjamin’s death.

He truly believes what he is doing is right and has his heart in the right place but his actions are too reckless and the fact he doesn’t factor in the causalities of his actions made him reckless. I felt like he met a perfect end as he eventually got what he wanted and sparked the Kingdom into wanting to fight Negan and the Saviors. Morgan played a pivotal role in ‘Bury Me Here’ you really felt his pain in losing his Student Benjamin this week, we had seen the bond between the two growing gradually in their student teacher roles and when Benjamin gave Morgan the painting you could tell they were close.

Watching Morgan grieve the loss of Benjamin is a good throwback to how Morgan was in earlier seasons of being unhinged and mentally unstable and was shot really well. This makes watching Morgan go from the calm peaceful warrior transition into Richards killer at the end all the more interesting as I felt more emotionally invested in his downfall.

Carol has taken an interesting journey this season and has gone from being a one woman army to being a recluse in hiding from her true self as much as the world. She clearly is suffering from some kind of PTSD as when she wakes in the middle of the night is very much at war with herself.We still see she has the skills to dispatch walkers with ease but it is the conflict with people that she seems to be struggling hence her isolation.

Her questioning Morgan for answers and not getting them leading her to go back to her safe little cottage seemed like she might stay out of this fight all along but when Benjamin dies on her table it is a turning point for her. She eventually finds out off of a very distraught Morgan what happened to Glenn, Abraham and the others in Alexandria and this finally leads her back to being the warrior she is meant to be. 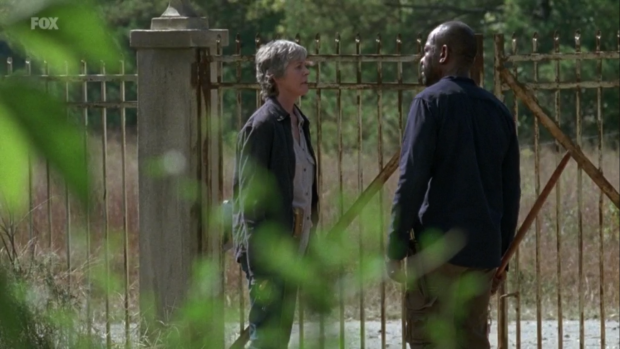 It looks like Morgan and Carol are about to trade places

‘Bury Me Here’ was an emotional episode because of losing a character we had come to like this season. Richard who wanted to fight but never had the plans to succeed but his heart was in the right place. With Richard’s death spurring the Kingdom into action we can expect a lot more violence to come and with what looks like Carol leading them they may become a formidable force in what is to come. Morgan has exiled himself to Carol’s old cabin to prepare to fight and we may see him in the final episode getting his revenge for his student, with 3 episodes to go all the pieces are falling into place.