The latest episode of The Walking Dead was a massive filler episode and the weakest of the season so far. In “Go Getters”,  too much time was spent on secondary characters with scenes that dragged on for too long and scenes crowbarred in to the episode that didn’t really benefit the story at all. We did get some good news such as learning that Maggie’s baby is healthy and the Saviours didn’t feel the need to kill anyone this week.

I missed out last week but after watching it I thought “Service” was a tense and engaging episode that really hits home the power that the Saviors have. It’s hard to watch how Rick and the others are dealing with this situation and I don’t think we’ve ever seen them in such a hopeless situation before. I’d give this one 7/10. 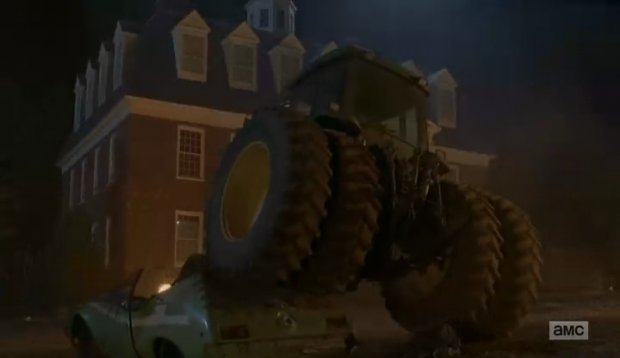 The majority of “Go Getters” was set in Hilltop where Maggie is hiding from Negan and is accompanied by Sasha. Maggie’s unborn baby is fine but I thought The Walking Dead had the opportunity for a really dark twist by killing off the unborn baby which would have been pushing it a bit too much. This episode also announced the return of Jesus who’s character has potential is he is able to show some leadership skills. He got off to a good start this week by blackmailing Gregory.

I really don’t like the Gregory character, especially the way he stole the pocket watch laid on Glenn’s grave. Maggie punching him in the face while reminding him of who she is was a really good moment and Lauren Cohen was excellent in this scene with some good material to work with. One thing I think that Gregory does have going for him is the way he is able to deal with Negan’s right had man, Simon. Despite the fact he was dealing with a different person, he seems able to say or do the right thing to avoid repercussions on himself, and by extension, the whole group.

I thought that Simon was very like Negan which seemed a bit of a cop out. This isn’t a sleight on Steven Ogg who played him who was actually pretty good, but they could have shown a difference in style between the two. I guess that it’s possible that Negan just trusts him as he has a similar leadership style but I don’t think Negan would have acted much differently had he been there instead and the whole scene was a bit drawn out. Both characters are basically villains who either scowl or smile fanatically with intermittent death threats woven in between. Possibly this is intentional as Simon turns to Gregory at one point during their conversation and says “I’m your Negan.” 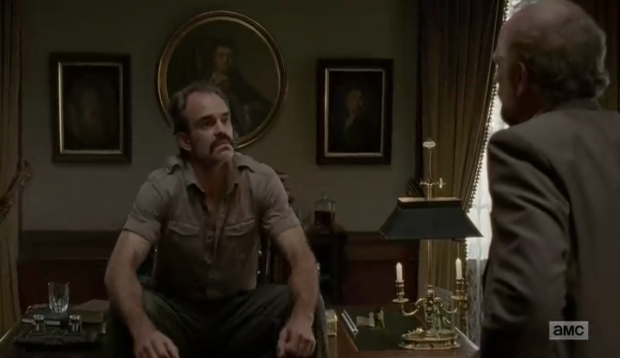 Away from The Hilltop we join Carl and Enid who find rollerblades that don’t quite seem to fit properly and decide to skate down the road with no concern for any walkers that might be nearby. The two of them end up kissing which I guess has been coming for a while. I think this whole scene was just another example of something just forced in to the story.

At one point it did seem like Maggie and Sasha were going to be captured by Negan’s men as he earlier admitted he has a thing for widows. One clever and intense point in Go Getters was when Gregory was ready to give up Sasha and Maggie but moved them in to another room and Simon was delighted with a case of Scotch Whiskey.

I was slightly baffled with the scene where Maggie and Sasha wake up to find the gates of The Hilltop breached and fires set all over the place. There was loud music blaring and walkers just strolling in to the compound’s wide open gates. It was an enjoyable scene to watch with Jesus performing martial arts and Maggie squashing walkers in a big tractor. It wasn’t until after this scene when we discover the reason for the breach was in fact the Saviours flexing their muscle as usual. A fact that would have made the sequence make a bit more sense and we known that at the time. 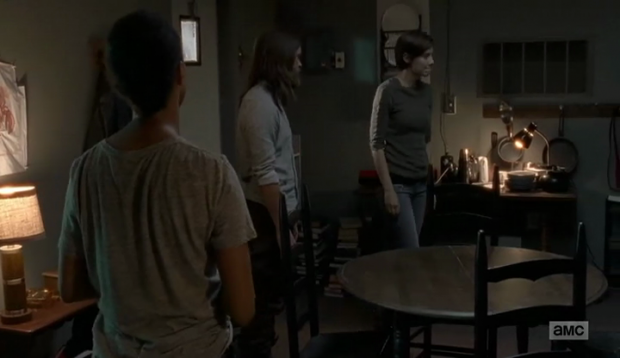 Jesus to the rescue

All in all not a great episode of The Walking Dead. I think that the show is starting to spread itself too thinly and spending time developing too many characters. It’s distracting from the core group which makes the viewer care less about them. We were introduced to Negan not too long ago, and now we have Simon who just doesn’t seem to bring anything extra. The same goes with Jesus, he just seems like a bland character who is only a tool to help Maggie and Sasha through the episode. The show is at it’s best during action and in Go Getters  I did enjoy the scene when the walkers entered the Hilltop and we got to see some acrobatics and walkers getting steam rolled by a giant Tractor. Hopefully the show can get back on track to return to it’s early season promise next week.