So after last week’s mid season opener we are brought back to the normal pacing of The Walking Dead. This slow and steady build up is the show’s bread and butter now where there are episodes of build up and then a few episodes of action and with the war against the Saviors coming alliances need to be forged and plans need to be made, this is what ‘New Best Friends’ was all about.

Rick’s rescue mission for Father Gabriel was an interesting development as last week I had thought father Gabriel had run off as it seemed in character for him. Turns out I was wrong and the new group of people who live in the rubbish dump had actually invaded Alexandria, kidnapped Gabriel and stolen the supplies. It was nice to see that Gabriel’s change to being more willing to fight was not a ruse and actually some good character development on the part of the writers. When ‘Rock in the Road’ had finished Rick seemed really eager to befriend this new group and to his detriment he had an uphill battle to get them on his side. 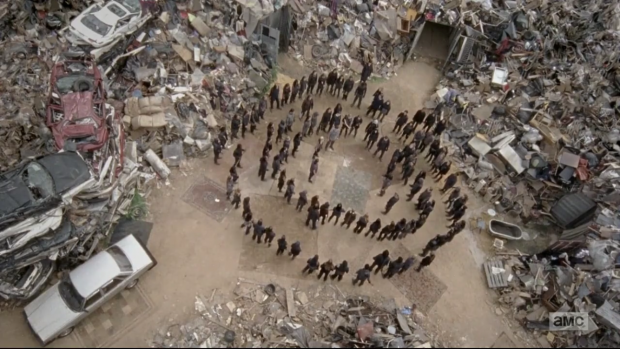 As far as how sane this new group is they seem to be well organized but at the same time they are quite unhinged in the way they talk very little and have a sort of Mad Max way of living their lives in that they do not want to bother things but will take what they want. The fact that they are still so mysterious really draws into wanting to know who they are and more on what has made them descend to the way they are living. I personally look forward to seeing how Ricks relationship with this new group develops.

The highlight of the episode was definitely the trial Rick had to go through to get this new group on-board with fighting Negan and the saviors. The walker he had to fight in the pit reminded me more of an orc from The Lord of the Rings or a Resident Evil style monster and was different from any other walker we had seen so far. It was an intense fight and even though I know Rick is an integral part of the show and less likely to be killed off I felt that he might not escape this fight unscathed. With the death of Glenn and Abraham this season you get the feeling the writers may take more risks with other lead characters. Last week’s run in with the zombie horde suggests that Rick is getting closer to getting himself seriously injured or worse. 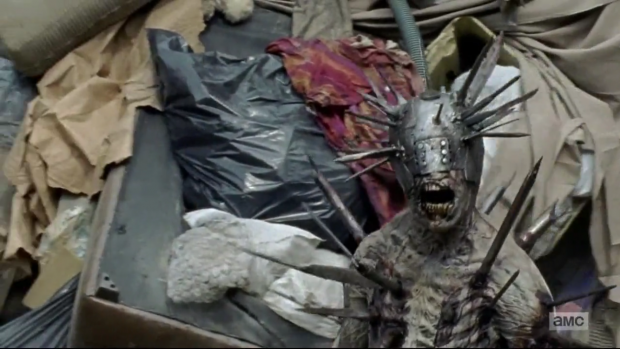 Elsewhere in The Kingdom it seems as though Richard is through with dealing with the Saviors as again this week he was taken advantage of and had to give up his gun. It felt like the more the Saviors push their luck the more the other settlements will eventually say enough is enough and all rebel and this day is coming but Ezekiel seems to want to avoid this as much as possible as he relents and lets the Saviors do what they please again. Richard seemed to have a plan to get Ezekiel dragged into a war with the Saviors and it looked like Daryl might have been willing to follow through on it. After finding out that Carol was going to become a victim in the aftermath it soon changed his mind. to be honest the plan was foolish from the start. Getting the Saviors angry is the last thing the people of the Kingdom need as it will only result in lots of death.

Carol seems to really be living the peaceful life and keeping herself to herself this season, after seeing Carol being a one woman army through the last few seasons feels like she has come to a point where if she starts to fight again she will lose what tiny bit of herself is left and become nothing more than a killing machine. Daryl’s choice to lie to Carol after hearing her speak about how she had to leave all the fighting is a huge part on what is to come as Morgan says if Carol had found out the truth about who had died she would be gearing up to fight with no hesitations. The fact that she was so emotionally distraught asking about everyone from Alexandria and how she felt she was asking Daryl to lie to her as deep down i think she knows that something must have happened.  Daryl, Ezekiel and even Morgan’s decision to sugar coat the truth from her and lead her to believe that everything is alright is there way of trying to protect her from the harsh realities they are facing because they too want Carol to live in peace. I truly feel that when the war with the Saviors finally comes she will play a pivotal role but for now Carol is on the sidelines and I look forward to finding out what eventually triggers her to fight in the end. 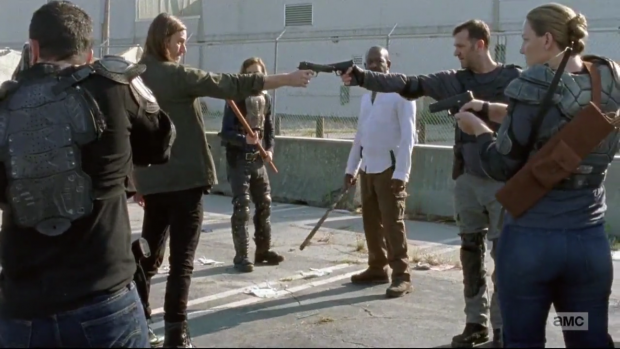 This episode was very much a lead onto episode setting up things to come from Daryl’s decision to leave the Kingdom and the sanctuary he had leads me to believe that this may be the beginning of his revenge against the Saviors as he is heading back to the hilltop. Rick on the other hand has a mission of his own in retrieving guns for his new friends so they can fight the Saviors with him. Ezekiel and Morgan are still pacifist in there way of dealing with the Saviors but with the last exchange i feel like another few incidents and that may change and with next week looking to be a Negan episode that change may be coming sooner than we think.