“Rock In The Road”

The Walking Dead is back this week after a near two month hiatus over winter and picks up nearly almost exactly where it left off; with Rick and the Alexandria community attempting to recruit the other communities to help fight Negan. 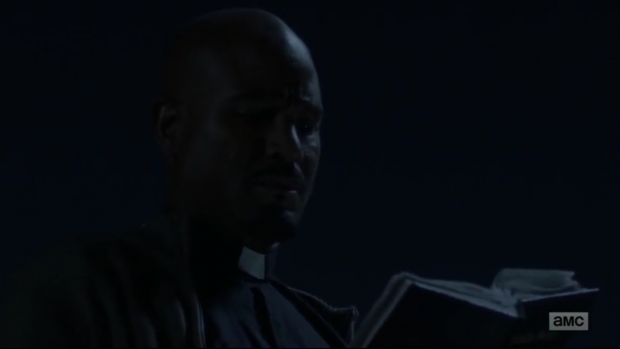 Father Gabriel Leaving Alexandria, but why?

Before we get into the meat and bones of Rick trying to recruit the Hilltop and the Kingdom we have to cover the really strange behaviour of Father Gabriel at the start of the episode. it really came out of nowhere especially with him saying in Episode 8 that he had found his courage and was willing to fight. So to go and run out stealing supplies and leaving Alexandria almost out of the blue felt very strange and out of place to me; not to mention almost out of character for Father Gabriel too but he has been known to be cowardly so I was really hoping this wasn’t him backtracking in his character development.

This Pre-opening moment with Father Gabriel aside the show more or less picked up exactly where it left off with Rick at the hilltop community trying to convince Gregory to help fight the Saviors. Gregory however is less than reluctant to help Rick with good reason. With everything that happened to Rick and Alexandria he has a right to not want to rock the boat so seems like he is trying to protect his people but his character speaks more to protecting himself. Even with Maggie, Sasha and everyone chipping in with advice and offering to train the hilltop community Gregory is still reluctant to change his mind. Enid is a real surprise here as she goes around Gregory to get the people of the Hilltop invested in fighting Negan. I feel that this little push is what will motivate the rest of the Hilltop to train and fight when the time comes. There is a nice little moment when Ricks group are leaving the hilltop and discussing the different ways to plan ahead. Daryl comments that if they don’t have the numbers then they should blow them up and Tara mentions that there are workers at the Saviors camp which were forced into labour so they might revolt too. These seem like teasers for what is to come in the War against Negan since they don’t have the numbers so may have to use guerilla tactics to beat him.

Jesus is really becoming an integral part of Rick’s group and the over all plot of the season. When he suggests to introduce Rick to the Kingdom and King Ezekiel I was really looking forward to seeing how Rick would react to the Kingdom. Daryl instantly dismisses the meeting upon arriving but Michonne seems more willing to except the situation. Jesus and Richard talking was a small highlight of just how much Jesus is integral to bringing all these different groups together in the background, he may not be a leader but he definitely has connections to all of the leaders to help make introductions. 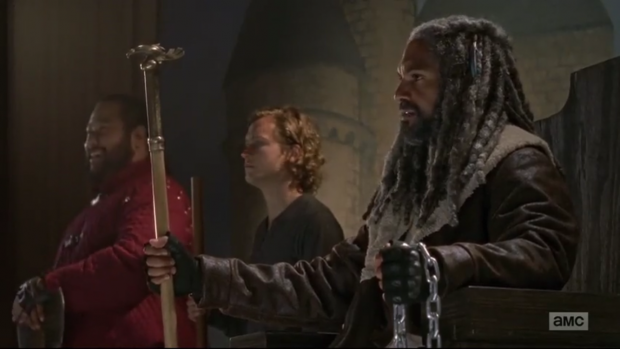 King Ezekiel and his Tiger scares the group.

Ricks first meeting with King Ezekiel is exactly how I thought it would play out with Rick not knowing how to deal with the idea of a ‘King’ but is still sceptical of whether he will be of help and whether his community will be up to the task of fighting. Rick meeting Morgan again was a nice little reunion and the moment Morgan tells Rick about him having to kill one of the Saviors to save Carol and Rick not taking advantage of the moment to remind Morgan that he would have to kill again shows how Ricks character is developing as a result of Negan. The actual meeting with Ezekiel is really amusing with everyone in the group cowering at the back of the auditorium because no one told them there would was a Tiger and everyone acting so non nonchalant about it all. Rick tries to explain his case to Ezekiel but it does not seem to help his case, Richard on the other hand seems more willing to fight but like Gregory. Ezekiel is unwilling to fight and wants to protect his people from suffering at the hands of the Saviors. Morgan’s input of not wanting to fight seems to be the argument in favour of not fighting but in capturing Negan instead seems a much better prospect than all out war. Rick on the other hand tells a parable to Ezekiel really helps emphasise the point of how the Saviors are something that should be removed for the good of everyone even though everyone else has accepted the status quo it needed to change for the better of everyone. I really felt that this would help convince Ezekiel to fight as when Rick usually speaks people tend to listen and follow him but its nice to see other leaders are not so quick to follow.

Before Rick and the group leave they meet with Ezekiel once more and he grants Daryl sanctuary which works good in two ways first it protects Alexandria from the obvious repercussions from the Saviors as they figure that is the first place that Daryl would go but also it gives Daryl a chance to convince Ezekiel to help fight. With Daryl helping to convince the people at the Kingdom and Maggie helping to convince the people at the hilltop they might just be able to band together enough of an army to take on The Saviors.

Watching the people in both communities in the background you can see the real difference between Alexandria, the Hilltop and the Kingdom in that the Hilltop and Kingdom are both peaceful farming communities who have children and families to look after. They are not warriors and this subtle background detail emphasises this to Rick. You can tell by his demeanour when he is told “n”o by each leader and he chooses not to fight their decision as he has learned his lesson of not getting people foolishly killed. Richard realises that they are their own downfall and this point is quite powerful as their own worst enemy may come to be the reason that the other communities fight. I like this idea as it helps define their own trapped state of affairs as being a prison of their own making.

This episode has been all about how to battle Negan and even though he has no physical presence in the episode the few lines he gets over the radio  are typical Negan you can sense the joyful malice he gets from being the boss and hearing his own voice. The lack of the Saviors in general is really refreshing as it feels like the pressure is off of the group just now.

The highway scene is by far a highlight of mine bringing back the earlier comments Daryl made of blowing up the Saviors so when they have a chance to steal all the explosives and RPG’s under the time pressure of a Zombie herd approaching is a change of pace for the show but it shows the group’s ability so adapt to new situations. Rick shows how inventive he can be by keeping the herd on the highway. To what end we don’t know yet but Rick seems to have a plan. watching Rick and Michonne drive down the highway mowing down the zombies is a highlight of the whole episode showing the ingenious nature of the group’s way to deal with the Walkers. They haven’t really faced a herd of Walkers this big for a while so it was a nice throwback even though the main bad of the season is Negan the threat of the walkers is still looming if they are in great enough numbers. 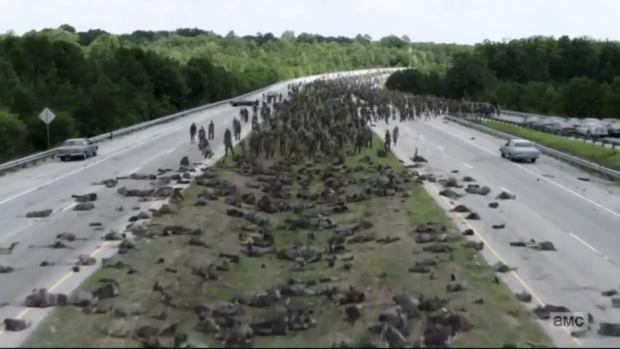 The highway scene is a highlight

Simon – Negan’s right hand man  was back at the end for Daryl and Rick plays dumb claiming he didn’t know anything which worked out really well with Daryl staying in the Kingdom otherwise he would have died. This is where it tied back nicely to Father Gabriel’s disappearance at the beginning of the episode. The fact that Simon is the one to find this comes as quite a shock to Rick but he is able to cover it up really well which shows that they can deceive the Saviors and get away with it. This will help them when they have to plan against Negan in the future. It is only a small lie but it’s a sign of what is to come.

Watching Rick and all of Alexandria react to Gabriel’s betrayal is against what the group view of him and they can’t believe it which works in their favour as they find a note leading to the boat. This raised so many questions at the end of if Gabriel was the man watching Rick and Aaron at the houseboat in the woods or if it was someone else.

The ending was the real surprise when Rick and the group went out to find Gabriel but were ambushed by another group who were well armed and well organized they had them surrounded and outnumbered in seconds at this point Ricks smile says a thousand words he had been looking fr his militia to fight Negan and had tried all other avenues from the hilltop to the kingdom and out of nowhere it seemed like fate that he was now surrounded by the very thing he had set out to find at the beginning of the episode.

In summary this episode was not action heavy but was more about Rick and the group’s journey to find allies in their forthcoming War with Negan and getting turned away at almost all junctures. Just when they weren’t looking for it, it seems that it may have just found them. By the looks of things this second half of the season is going to escalate to a grand finale and I for one cant wait to see that clash when it comes.