The Walking Dead follows on from ‘New Best Friends‘ with Rick and Michonne out hunting for weapons to take to the people of the Garbage Pit so they will fight Negan and the Saviors alongside them. Meanwhile there are tough choices to be made back in Alexandria for Rosita and Tara. 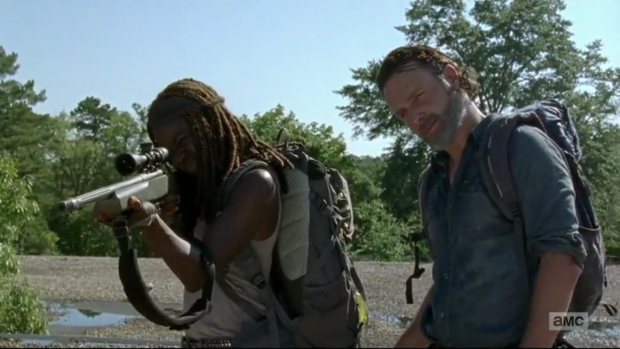 Rick and Michonne have fun at the fair.

‘Say Yes’ is very much focused on Rick and Michonne’s developing relationship throughout season 7 and how far they have come together. The road trip montage has shown how well they get along as well as how much they enjoy each others company and have sort of come dependent on each other. This is probably going to be as far of a love story as The Walking Dead will be willing to do which is good because this isn’t what this show is about. The way it is shot it feels more like they are on a relaxed road trip than scavenging to survive whilst finding guns for their new friends. It is more emphasized with Ricks reluctance to go back with insisting on ‘one more day’ of looking for supplies.

They work well as a power couple as they have both beaten the odds to get to where they are right now and its nice to see them get a little break from all of their battles even if it is short lived. Even when they are faced with the Walkers in the carnival they seem to be having fun whilst they are in danger. It shows how much confidence they have in each other that they can rely on the other to be self sufficient in taking out their fair share even if Rick sometimes gives Michonne more Walkers to kill.

Rick’s confidence does get the better of him a few times resulting in some less than stellar plans this week from his idea of blocking the gap with the car to him climbing then falling off the Ferris wheel into Walkers (both ending badly). It seems he has put his guard down around Michonne and could end up costing him in the future. 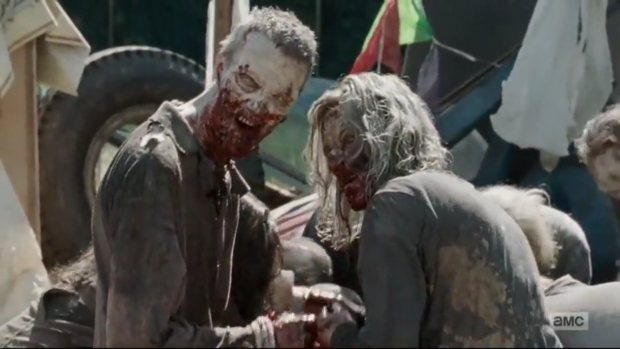 He seems unable to cope with losing so much this season as you can tell with him no longer wanting to be the leader any more after Negan and the Saviors are taken care of. It’s good to see that he has recovered from the season 7 opener along with everything else that has been thrown at him but it still keeps him up at night and has taken its toll on him.

Michonne has essentially became Rick’s crutch the last few seasons and he really relies on her to get him through from her skills at killing walkers to her council in helping him make decisions and keeping him on the right path. This is an example of good character development from when she first joined the cast and felt like an outsider to now being so integral to the group’s survival.

You can really tell Michonne loves Rick by her reaction to what we perceived as Rick being eaten by Walkers which is obviously going to be a fake out because he is a main cast member but you got the feeling that maybe Michonne might not make it when the Walkers descended on her. This fake out death was used before in season 6 episode ‘Thank You’ with Glenn and he later ended up dead. Could this be a foreboding to Rick or Michonne’s fate in the upcoming battle with the Saviors? After all no main cast member is safe and they have hinted that they will lose people they care about.

Even when they finally retrieve all the guns for their new friends the Garbage People, it doesn’t seem to be enoughand they must salvage more. I really get the feeling that at some point these new friends will betray Rick in some way in the future but for now the tense alliance between the communities continues. 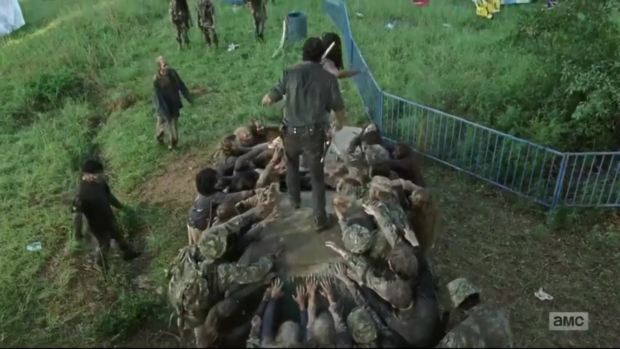 Everything seems to be going to plan, sort of.

Tara didn’t get a lot of screen time this week her dilemma of telling Rick and the others at Alexandria about Oceanside and all the guns they have stashed away was an interesting one. The fact she was talking with Judith who couldn’t comprehend what she was saying let alone respond was a nice way of letting the audience know how she was wrestling with her decision to break her promise to her friend Cyndie and tell Rick where Oceanside was.

It really did look like Rick and Michonne had saved Tara from having to make the hard choice by returning with the guns but since the Garbage People needed more she eventually relented and at the very end it looked like she was about to tell Rick where Oceanside was. I really look forward to see how this develops as Rick will have to negotiate with another group to get them on board with the plan or will he go in and take the guns possibly making another enemy that may come back to haunt him?

The other main plot of ‘Say Yes’ was Rosita, who has been spiralling since the start of the season watching Glenn and Abraham being murdered has become obsessed with killing Negan and getting her revenge to the point she doesn’t even care if she lives or dies doing it. I thought Father Gabriel might have put some sense into her back in ‘Hearts Still Beating’ but then she took a shot at Negan anyway. It really seems that she has a death wish and by the looks of things she is about to fulfil it but is taking Sasha along for the ride. 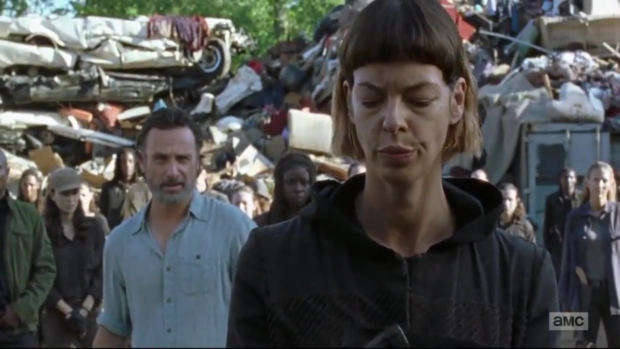 Even with the guns the Garbage people still want more.

‘Say Yes’ was essentially just another filler episode that moved the plot forward and set up what will be more exciting things to come but it still had the action in the right places and the character development to move the story in the right direction. It set up an interesting meeting with Oceanside for Rick and a date with Negan and a bullet with Sasha and Rosita but with only four episodes remaining and a lot still to happen before the main battle against Negan and the Saviors can happen, I am starting to wonder if we are going to be left on another cliffhanger like the season 6 finale, not that that is a bad thing mind you.