The latest episode of The Walking Dead was a lot better than it has been recently, particularly as they dropped the annoying habit of only telling the story of either one person or a small group of people per episode. We got to see a few more characters in “Sing me a Song” as we get to catch up with Rosita and Eugine as well as Rick and Aaron. The most tension was centred around Negan tormenting Carl which seemed to take up the biggest portion of the episode. 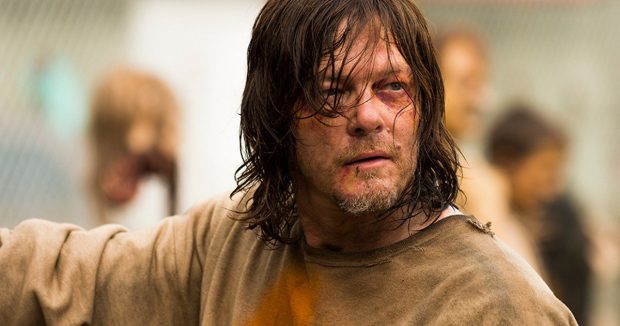 The episode was almost as though the show got to episode 7 of the season and realised they had more of the story to tell than they had time for. This resulted in them probably trying to tell too many stories that could have easily been accommodated in earlier episodes. Not that this counts against the overall quality of the episode but it is worth mentioning.

Negan had already expressed admiration for Carl’s attitude after he gave Negan some backtalk in the first episode of the season. Carl is an easy character to get frustrated with, and his plan to try and sneak in to Negan’s lair with the intention of killing him seemed reckless at best. He gets inside and then proceeds to shoot two of his guards, then when Negan shows up he neglects to pull the trigger. It’s still unclear to me what his plan actually was or how or even if he intended to escape. I liked the scene in Alexandria where Negan discovers baby Judith, very chilling indeed.

Most of the episode is spent with Negan showing Carl that he lives like a king and trying to show him how he has carved out the perfect life for himself where he can have anything he desires. It’s possible that he is looking at bringing Carl in to his service by tempting him with alcohol, women and power. This would make sense as what better way to ensure he has Rick wont step out of line than to have Carl actually wanting to serve Negan. It’s quite a far out theory that probably won’t pan out but this is certainly the type of thing Negan would look to do.

I think Jeffrey Dean Morgan has generally done a good job of Negan, he can come off as a bit goofy sometimes but the scene in “Sing me a Song” when he burns Mark’s face with an iron was great. He was able to project well an authoritarian despot living in a post apocalyptic world and how that kind of person might behave. The way he tormented Carl by telling him to remove his eyepatch and swinging Lucile around while he sung “You are my Sunshine” was quite haunting. 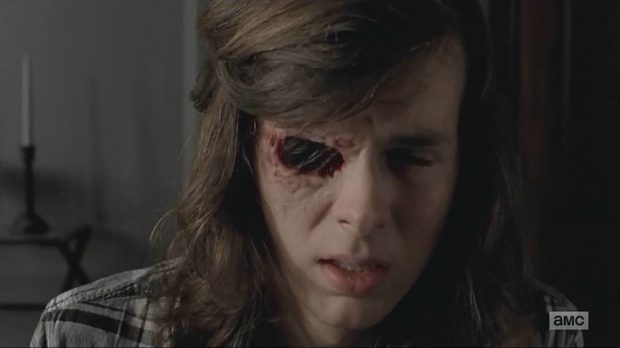 Carl without his eyepatch

Two of the other characters we saw in this weeks The Walking Dead were Father Gabriel and Spencer. They’re on a scavenging mission when Spencer admits to him that he has no faith in Rick. It makes sense that he feels this way about Rick as Alexandria was a peaceful community living under his mothers rule before she died. Our heroes then show up and their society almost collapses in a few weeks. Gabriel maintains his cool with a slight smile on his face when Spencer raised his doubts about Rick “It doesn’t make you a sinner, but it makes you a tremendous shit.” He then gets out of the car and walks away which clearly illustrates his allegiance to Rick.

We got to see more of Michonne this week than we have in a while, and like Rosita is one of the only people still showing like she wants to resist Negan. She sets a trap for a Savior by blocking the road with walker corpses then catches an disarms a woman. As she is on her own it’s not clear how she will try and get in to the camp or get anywhere near Negan for that matter. The only thing that appears to be clear is that she intends to kill him. I like Michonne and I reckon she will play a key role in the episodes to come if the group are to dismantle Negan’s group. She is one of the few characters left who still seems to have her resolve.

We had a scene after this one with Rosita trying to convince Eugene to make her bullets. With Rick seemingly in super subservient mode and Daryl a prisoner, it seems that these two – and Carl, are the only people who seem genuinely interested in being proactive against Negan. I would have to think that this will mean Rick will take a back seat for the mid season finale next week, but who knows.

Rick did have fleeting apperances in this episode as he was out on a scavanging mission with Aaron. They come accross a sign that has a list of weapons and how good their owner is with them. Since they weren’t attacked it suggests that their owner is dead an so the weapons are fair game. Could this point to a big finale next week as our heroes will now have guns and ammo to tackle Negan? 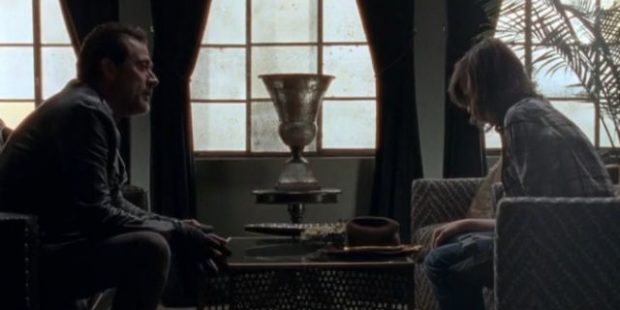 Negan lays it on the line

A solid episode and the best The Walking Dead has been in a while. Negan was back to his best and the scene with the iron was very good as was the tension in the scenes with Carl. It does look like that Carl’s stupidity for trying to kill Negan is going to cause some kind of collateral damage. I just hope that the discovery of Judith won’t be apart of any ideas of revenge Negan is no doubt having. This week did have a few weak points too, particularly the number of people time was spent on that felt wholly unnecessary. In the past few weeks the show has tried to stretch out a paper thin story and this week they possibly tried to crowbar in a bit too much