In the latest instalment of The Walking Dead, Tara stumbles upon a community made up of women only. “Swear“ was a stronger episode than the last two with a better story and better written. Alana Masterson put in a good performance and added a bit of humour to the series. Before this week we hadn’t seen Tara since last season and Heath also made a brief appearance in a few scenes. 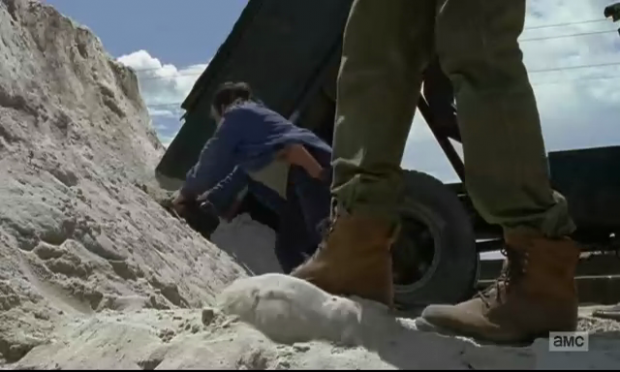 Tara and Heath on the bridge

Although this week was better, it still leaved a bit to be desired. Building the whole episode around one main character and introducing a new settlement with yet more two dimensional characters is becoming a pattern. The story is spread so thinly at the moment and I don’t see how bringing in more characters is going to enhance the show. It also seems a bit implausible that there are now so many small colonies of survivors fighting to survive. Compare this with the early days of the show and the contrast is massive, we would be introduced to a new group probably once a season till about season 5. This just seems a bit convenient when we consider the size of the US and the fact that all of these colonies seem to be within a very short distance of Alexandria.

It seems like the logical conclusion to having all of these groups under the control of Negan indicates an uprising against the Saviours at some stage. This is episode 6 of the season and most of the episodes have pretty much held focus on a single location each. The show really needs to start involving these groups with each other on a bigger scale and try and weave a better story out of that. Each of these places have their own rules and values which are determined by a number of factors. In these situations morality becomes relative and right and wrong are almost totally subjective.

This particular settlement is no different, they are a society of women only, whose menfolk were executed by the Saviours. In order to protect themselves from dangerous people like Negan who would want to do them harm, they have a visitor policy of shoot on sight. This seems to be an instinctive reaction to the horrible trauma they were put through, because of this they can rationalise and normalise the idea that trying to shoot dead an unarmed woman on her own is ok. 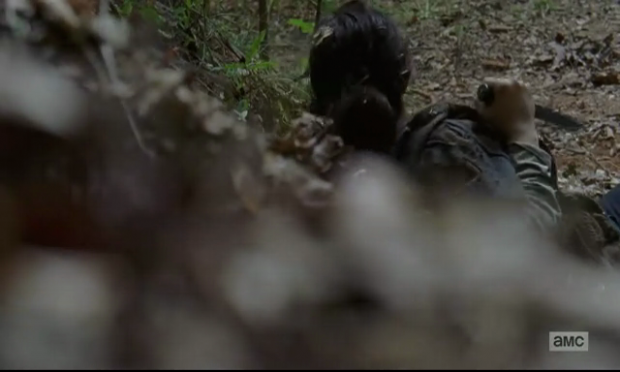 The women who inhabit the place didn’t bring anything new to the wider story. We weren’t introduced to any interesting characters, apart from Cyndie who saved Tara’s life not only from her own friends but from the Walkers too. The rest of them just seem to scowl a lot and talk about how they don’t trust outsiders. However the do manage to catch Tara out on her lie about having worked on a Fishing Boat, obviously they have some wits about them if the managed to escape the influence of the Saviours and stay hidden for so long.

Their plan to isolate themselves completely from the outside world does make sense I suppose, although how sustainable that is I’m not too sure. They want to remain hidden but any time someone wanders in to their camp dozens of people fire off round after round of bullets which can probably be heard miles around. Not the best tactic to remain hidden.

The episode does have a few good points, Tara was interesting and had a few jokes in there to lighten the mood a bit. She also takes the time to point out to Heath, that it’s essential to join up with others and build up alliances for the good of the group. It’s ironic that this point of view almost got her killed.

Cyndie does have an opposing philosophy when it comes to the rest of her group in that she doesn’t apply the shoot on sight rule and instead helps Tara, simply because it’s the moral thong to do, in her mind at least. “Nobody is evil. They just decide to forget who they are”, says Cyndie. I suppose we could argue she is wrong and her friends are the ones in the right as this Utilitarian view point has kept them alive so far. 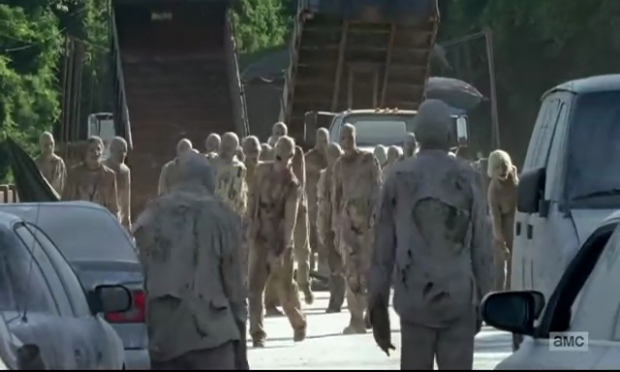 Some walkers doing their thing

“Swear” was a pretty average episode. The new group didn’t really bring anything significant to the show, just another bunch of people we know little about and have nothing invested in due to lack of screen time. This episode of The Walking Dead was marginally better than last week largely thanks to Alana Masterson but the show is still very much in a bit of a slump at the moment. They really need to start using all of these small groups properly by joining them together and making them seem part of the same story, something this season has failed at so far.