“The Day Will Come When You Won’t Be”

After a long Summer of trying to guess who got the jaggy end of Negan’s barbed-wire baseball bat, we finally got our answer. The Walking Dead didn’t disappoint as we were given a double whammy. I think most people had their money on Glenn considering how devastating this would be for Maggie. The whole episode was geared towards maximum tension and suspense as we got to know the personality of the new boss man. Jeffrey Dean Morgan didn’t disappoint and he looks to be a strong addition to the cast. As Negan said, “Welcome to a brand new beginning, you sorry shits.” 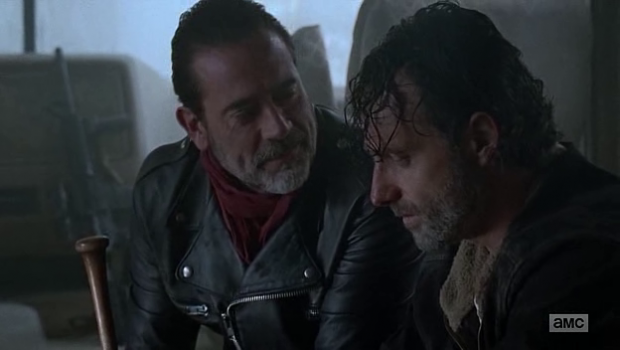 Lets have a chat…

“The Day Will Come When You Won’t Be” was much anticipated with fans eager to find out who had been clubbed to death, the episode that definitely redeemed the somewhat monotonous 90 minute long season 6 finale. Glenn was the real loss for both the group and the viewers having been with the show from the start. Sure, Abraham wasn’t unlikeable. He is quite a new character with little purpose other than concerns over his love life so he won’t be missed as much as Glenn. I guess the point I’m driving at here is they were right to kill off either Glenn or one of the other big characters or the last few months would have led to an anti climax. Saving his death for last was a nice piece of writing after it seemed Negan might put his baseball bat away for another week. However, that wasn’t to be, and watching the bad guy repeatedly smashing in the heads of two people to that degree was pretty brutal. Gore has been a big part of the show since its beginnings but could possibly be used a bit more sparingly.

Quite a lot of this episode was spent with Negan trying to  train Rick in to submission, treating him more like a disobedient dog rather than an enemy. Only finally accepting he had broken Rick by having him think he was going to cut Carl’s arm off which left Rick looking on the edge of a panic attack. We know Rick is a man who can bounce back as he has faced a similar type of enemy in The Governor a few seasons back, although its fair to say he wasn’t as formidable or ruthless as Negan. He manages to get inside his head as the camera cuts to Rick as we hear Negan’s voice in the background “I bet you though you were all gonna grow old together”. His purpose really only seemed to be about breaking Rick, once he can dominate Rick, he can dominate the group. 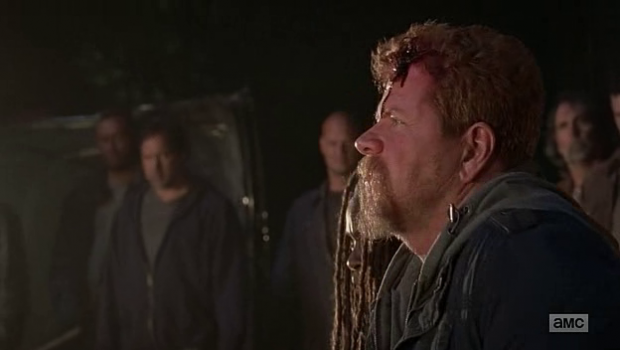 Abraham takes a sore one

The leadership style of the two group leaders differ in many ways, Rick treats strangers with apprehension from a desire to protect his own. This is due to him having his family with him for much of the show and he seems permanently in protective father mode which extends to the rest of his group. Any time he has had to deal with a prisoner he has come at the situation from this point of view.

Negan, on the other hand seems to be polar opposite in terms of his motivations. We don’t know a great deal about his back story but what we do know is that he is brutal and exploitative. This would seem that his power is generated through fear, and while he has the Alpha male status within his group, he doesn’t command the same type of loyalty that Rick does within his. In theory this could result in his status being challenged within his group causing discord, which could enable Rick to take advantage of the situation somehow.

I mostly liked this episode due to Negan giving his speech in a delightfully psychotic manner which made me feel pretty anxious about what he was going to do next, almost feeling like the baseball bat was going to swing at me. This is surely the sign of good writing as well as effective acting. I did think however that getting Rick to cut off Carl’s arm would have been a step too far, leaving him with one eye and one arm would be a bit cruel- even by this shows standards. 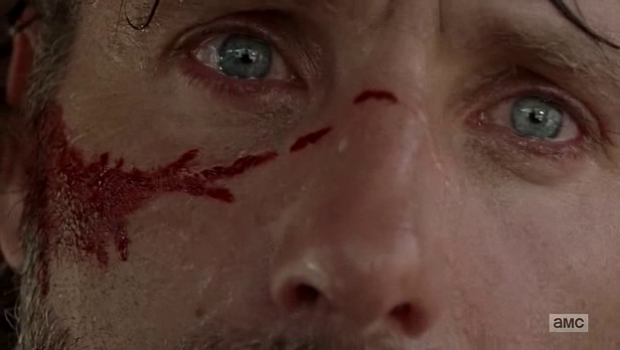 This episode of The Walking Dead delivers everything I think most viewers were hoping for since the end of season 6 and is a great base to build on for this season. The group are broken to a point worse than ever in the 6 seasons so far, Daryl has been taken, Glenn and Abraham are dead (possibly killed too gorily)and that’s not to mention the disappearance of Carol and Morgan. Andrew Lincoln and Jeffrey Dean Morgan worked well together and I look forward to more of the same over the next few weeks.