The Walking Dead Catches up with the people of the Hilltop and more importantly picks up with Sasha and Rosita planning to take down Negan.

The first five minutes of ‘The Other Side’ follows the settlers of the Hilltop as they go about their daily lives without dialogue. This montage really shows the tranquillity of how the people of the Hilltop are living right now. Contrasing this with Maggie and Sasha training the settlers how to defend themselves shows how the Hilltop culture is starting to change. 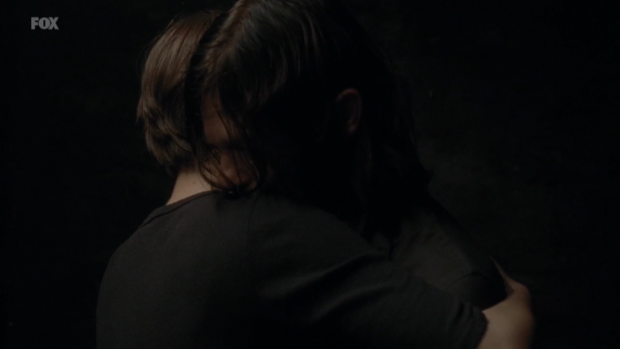 Daryl and Maggie finally get to console each other over Glenn

Maggie and Daryl’s relationship in this episode is finally explored as the two haven’t really been in the same area for any length of time since the season 7 opener. It was interesting to see that Daryl still felt such guilt and responsibility over Glenn’s death that he couldn’t even bring himself to talk to her when he moved back to the Hilltop.

Maggie as tough as she tries to be around everyone else shows a moment of grief and vulnerability after seeing Daryl. Its nice to see this addressed later on in the basement when Daryl is about to make a mistake trying to protect Maggie from one of the Saviors, It all eventually comes to the forefront and Maggie lets Daryl know that it was never his fault what had happened. She also tells him that Glenn would have wanted him to forgive himself because he was one of the good guys. This is a really genuine character moment that speaks to the history of these two characters.

Gregory is still as cowardly as ever when it comes to the Saviors and staying in their good graces even willing to give up the Hilltop’s Doctor knowing it will possibly endanger his standing as leader.

His interactions with Simon from the Saviors shows his concern but the fact he doesn’t sell out Maggie, Sasha, Daryl or anyone else he finds a threat yet shows he still is unsure of his value but. His bargaining did gain him favour which makes him a threat going forward if he chooses to be. On the other hand he did get given a way into Negan’s compound from Simon so if Gregory can be turned he could become a useful asset in the war to come. 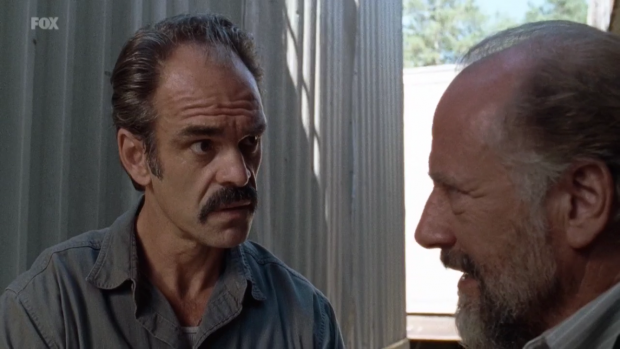 We see him taking his new found confidence later on and using it on Jesus to order him around and split up the group who he views as the most troublesome to his continued leadership of the Hilltop a smart move but with tensions running high could be too little to late as I think Maggie could take his place as she is already ingrained in the dynamic of the group.

Sasha and Rosita were the bulk of this episode, their decision to commit to killing Negan was finally put into effect almost instantly from last weeks ‘Bury Me Here‘ which for the Walking Dead is quick in terms of pacing something the latter half of this season has been missing.

Their impromptu road trip and feeling of hate towards one another is understandable as they both are on a revenge mission for Abraham’s death as the hands of Negan but they never really see eye to eye on this. It takes a road trip and sitting over Negan’s compound before they eventually seem more on the same page which feels a bit rushed but it adds context to what happens next.

Sasha who had been calculating and wanting take Negan out from a distance so that she might get out alive suddenly changing her view point because of a small heart to heart with Rosita really felt contrived. Watching her go from cautious to guns blazing into the compound felt out of character for her especially when it came at the expense of saving Rosita, who has had a death wish since Abraham’s death. 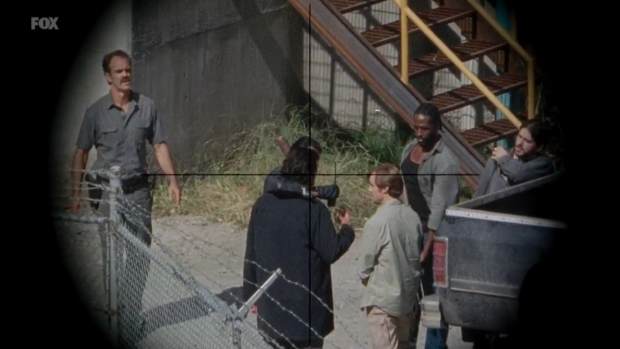 Negan is a tough man to kill so it seems

Rosita still is a very one note character on her quest for vengeance with her death wish. She finally convinced Sasha to run guns blazing into the Saviors compound and perhaps to her death. I highly doubt that will be the case as it didn’t happen on camera so i suspect she is alive but perhaps captured.

After Daryl finding out where Sasha and Rosita had gone it seemed as though he was going to get to take some revenge on the Saviors finally. This is where the pacing of The Walking Dead really falls apart as just when the action was starting to pick up the episode ends. I am all for a cliff hanger in this show as it can work really well but when you are trying to build up tension for the season finale it seems counter productive especially when next weeks follows Rick and the survivors of Alexandria.

Whilst it seemed as though we were making some progress towards maybe seeing Negan get taken out from either Sasha or Rosita it seemed it was all for nowt. It appears as though it will be up to Daryl and Rosita to finish this mission in the season finale but we will have to wait a fortnight to find out either way. Whilst it seems the people of the Hilltop are about to have to make some choices in who they want to lead them being either Maggie or Gregory.