Thunderbirds Are Go heads back into space to rescue a transport ship full colonists looking to set up a home on Mars.

This episode is almost entirely focused on the rescue at hand and maintains a really quick pace as a result. It takes almost no time before Thunderbird 3 is deployed and the situation maintains a real sense of urgency. 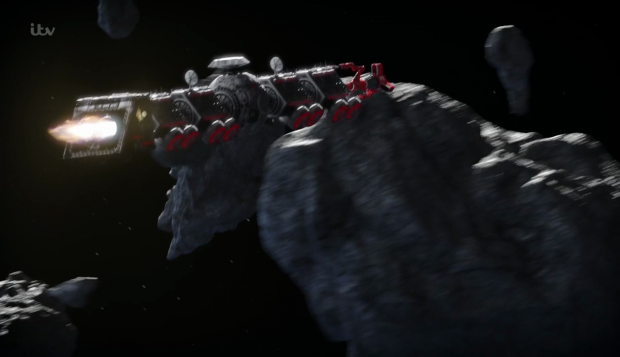 Thunderbird 3 acts as an engine

As action heavy episodes go this is a really impressive one. There are a good amount of close calls, tense moments and high stakes to keep things moving. We also get to see plenty of quick thinking from Alan and Scott on how to fix things. I also liked the design of the colony ship.

Thunderbird 3 was used to great effect here with it transitioning from being the vehicle to get them there to a replacement engine for the colony ship and a shield for them to survive entry into Mars’ atmosphere. I always like when the vehicles are used in creative ways and I’m not sure it would be possible to cram any more uses for Thunderbird 3 into a single episode.

It was a good episode for Alan who showed plenty of initiative throughout. His plan to use Thunderbird 3 to guide the colony ship was clearly an inspired one and the heat shield idea was his too. We don’t see it often but Alan is a very resourceful character who is able to think on his feet and puzzle his way through a situation. He is also really skilled but that applies to the other brothers too.

Scott is along for the ride but doesn’t really do very much other than pilot the pod that is used to destroy asteroids in the path of the colony ship. He shows good leadership by acknowledging that Thunderbird 3 is Alan’s ship and he needs to let him do things his own way. Scott is clearly still in charge but having that trust in Alan’s ability is a good thing too. 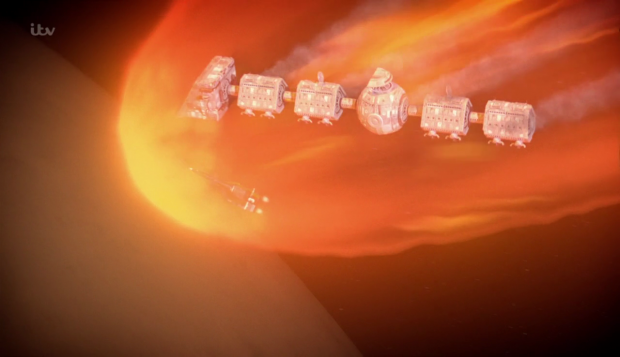 This episode also had someone else along for the ride. Captain Lee Taylor (Rich Hall) is an old friend of Jeff Tracy and one of the first men to set foot on Mars. This makes him a living legend and also gives him ties to the brother’s lost father. The episode doesn’t quite make enough of this as most of Taylor’s screen time was taken up with frustrating gags about his bad memory. He mixed up the names of the brothers entirely too often and it just got old really quickly. There was another running gag about Scott and Alan thanking one another that I could have done without as well.

It was good to hear someone talk about Jeff as it helps build into a larger than life mystique for the absent father. This would have been a good opportunity to see some flashbacks of Jeff and Taylor landing on Mars so it’s a shame the time wasn’t taken to deliver some insight on who Jeff was as a person. If any of the brothers had taken advantage of him being around and learned more about their father then his presence would have been far more meaningful. Taylor’s presence is a bit of a wasted opportunity.

I wonder if the show will ever deal with the loss of Jeff Tracy in some way. I’m not sure what could be done beyond revealing that he’s still alive or chronicling some early missions in flashbacks. Maybe a flashback episode of him establishing International Rescue would be a good way to do it and Lee Taylor could be a part of that in some way. I find the character fascinating purely because he’s absent and I’m eager to learn more even if the characters aren’t. 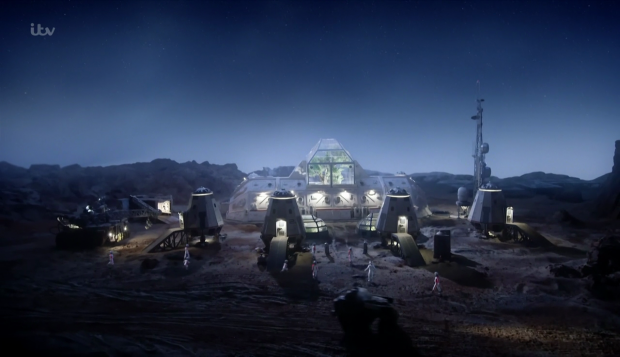 The character is clearly very brave and skilled as we see from him going aboard the colony ship and helping them out with their situation. At the very least it’s easy to see why he would be sent on the first manned mission to Mars and it’s clear that his reputation is deserved.

I thought the set pieces were all really well done. The asteroid dodging was really exciting and the dangerous descent into Mars’ atmosphere was appropriately tense. This episode is another example of things not going exactly to plan and I always like that when that happens as it allows the brothers to be more creative and shows that their rescue attempts are very dangerous.

A well paced episode that allows Scott and Alan to show their creativity in tense situations. The danger level rose at a reasonable rate and the various set pieces were appropriately exciting. There is a bit of a missed opportunity in the use of Captain Lee Taylor as his presence was the perfect opportunity for the brothers to learn more about their father. It’s a shame that the episode doesn’t take advantage of that as there is a good story to be told with the Jeff Tracy character that has been all but ignored up until now.