Thunderbirds Are Go moves away from the oceans and outer space when a ship attached to a balloon finds itself heading towards disaster.

This was a fairly typical episode for this show and it was really well executed for the most part. I rolled my eyes slightly when Lumiere was mentioned but thankfully his presence was minimal and quiet. The actual man needing rescued was a pretty standard idiot in danger who doesn’t bear much analysis. 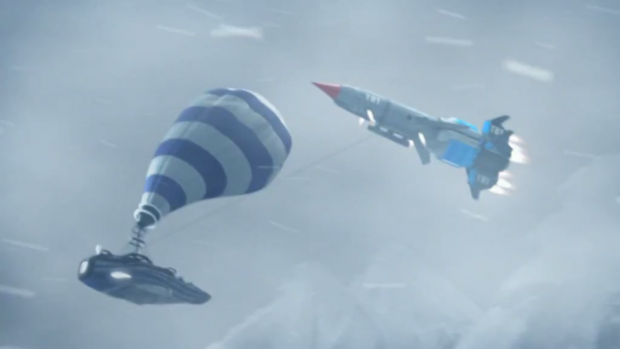 I really liked the rescue in this episode as it had everything that makes them interesting for me. Not everything went according to plan so Scott had to think on his feet, the environment meant that the Thunderbirds were largely useless and the situation was constantly evolving so there was a certain amount of unpredictability to it.

Taking Thunderbird 1 out of the equation and having Thunderbird 2 directly causing problems on an unstable mountain were both really nice touches as it meant that the characters were out of their depth somewhat. Of course this was largely fixed by Brains having whipped up a prototype perfectly suited to the situation but forcing the characters to use their wits rather than their ships always enhances things.

There were other little fun touches in the episode such as Brains interrupting the Thunderbird 2 launch sequence in order to tell Virgil about his prototype. I’ve often commented that the use of stock footage in this show takes up too much time in the episode so I was amused by the interruption to that. I wonder if it’s a direct reference to the same footage being played week on week or if it was just a fun way to introduce the new prototype that Brains had whipped up.

The prototype itself was nothing exciting as it was just a white ball that could roll down a mountain safely. It fit the situation well enough but there was a real lack of tension once it was introduced. This was redeemed somewhat at the end when it couldn’t stop but since the occupants were relatively safe I assume that it would just roll until it hit something and stopped that way.

Kayo was provided another opportunity to show how resourceful she is by assessing that the situation didn’t feel quite right and heading off to investigate on her own. The past few episodes have really been driving home how potent her instincts are and that her hunches always have merit to them. Kayo is definitely the best character in this show and this is being consistently proven with each appearance. 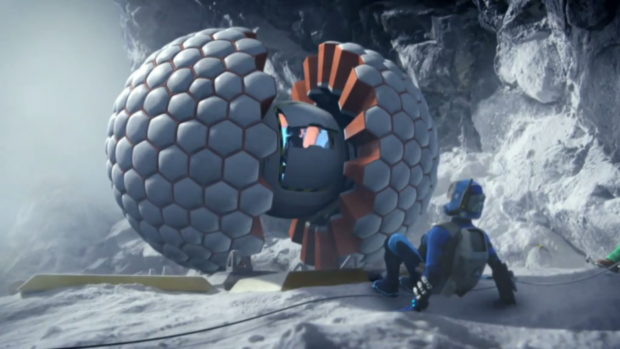 There was a really annoying running gag where Brains kept repeating his new catchphrase “R.A.D.” which is an acronym for something. The episode leaves the definition as a mystery which I found to be really pointless as the meaning wasn’t all that interesting. If there had been one or two instances of it then it might have been fine but the constant repetition was unnecessary and irritating. I know this is a show aimed at young kids and jokes like that are aimed at them but I’m tough on this show because I know it’s capable of delivering better.

A solid if by the numbers Thunderbirds Are Go episode. The plot was another idiot in danger story but the execution of it was really competent. Things like Thunderbirds 1 and 2 being rendered useless was a nice touch as it forced Scott to rely on his wits rather than his ship. Brains’ new prototype wasn’t all that exciting to look at but it made the episode feel more dynamic just by using it. Kayo had yet another opportunity to show her judgement and resourcefulness which is always a win as far as I’m concerned. Annoying recurring gags aside this was a really solid if unremarkable episode of this show.