Thunderbirds Are Go takes some inspiration from Armageddon when a wayward comet threatens all life on Earth.

The similarities to Armageddon are thankfully few and far between but the plan to drill to the core and plant a bomb is exactly the same. I don’t really have any insightful comments on the comparison but I felt that it was worth mentioning. 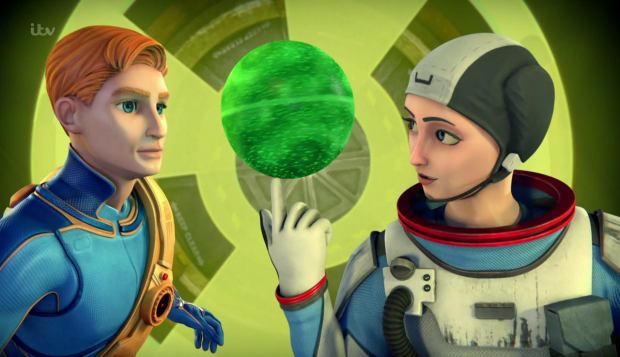 John takes some time to unwind

Since this is a space adventure that largely limits the plot to using Alan and John in Thunderbirds 3 and 5. Virgil comes along for the ride in this case as well but the main focus is on Alan and John as far as this episode is concerned.

So far the second season has focused less on Thunderbirds 1 and 2 but has gone a little too far the other way as I mentioned last week with regards to Thunderbird 4. Episodes where all of the ships play a part probably aren’t practical very often as the show will start to feel a bit overstuffed and messy but having more variety in what ships take the focus of an episode is a problem that needs to be solved.

This episode uses Thunderbird 5 really well and that’s definitely a rare thing. Usually John and Thunderbird 5 are used to monitor a situation but rarely actively involve themself in the events. Having this happen makes the episode feel a lot more unique than usual. The last time Thunderbird 5 was actively used in a story was in the first season episode “Skyhook“. 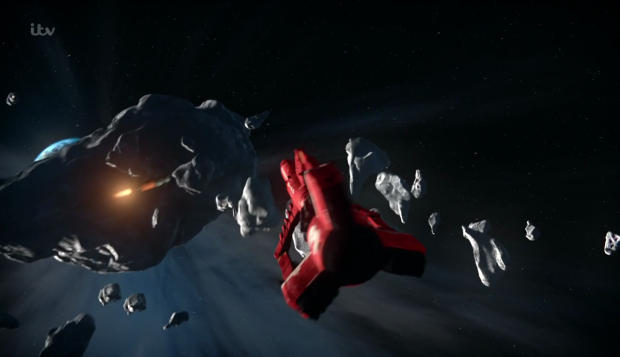 Thunderbird 3 struggles to stay in one piece

In some ways this episode is similar to “Skyhook” as it features the return of Langstrom Fischler (Rhys Darby) who again serves as an antagonist of sorts. His rampant stupidity is what makes him dangerous rather than any villainous intent though which makes him more of a nuisance than anything else. I feel that putting the entire planet in danger by redirecting a comet should have had more consequences for him as it’s a lot more than a simple mistake. The episode doesn’t really deal with the consequences of this but it’s possible that his next appearance might do this.

It’s actually a good thing that Fischler doesn’t have much of the focus as this allows for John to have some character development. We see him relaxing by playing Zero-G handball with Rosamund Pike’s Captain Ridley O’Bannon, who was introduced in “Ghost Ship“. It’s a good scene as it lets us see that John has a bit of a playful side and his life isn’t entirely concerned with monitoring disasters. It also ties into the sense of loneliness that John often feels since he is pretty much always isolated up on Thunderbird 5 save for when he communicates with others. He doesn’t often see people so this is clearly something he appreciates and I liked the subtle hints of an attraction between John and Ridley.

Ridley is also shown to be a really stubborn and confident person who knows what is important to her. She makes sure that her crew gets off her station but refuses to leave herself because her command is important to her. This forces John to bring Thunderbird 5 in personally to help her preserve the station. It might seem like an irrational attachment but Ridley asks John if he would abandon Thunderbird 5 so easily and John doesn’t have an answer. The visible double take was a nice touch as it shows that he realises he is just as stubborn. 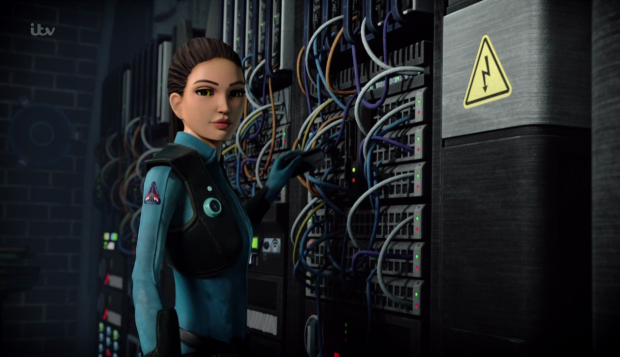 Kayo does what she does best

The mission to destroy the comet was tense and exciting as things didn’t go entirely to plan. Thanks to Fischler’s idiocy Thunderbird 3 was put in serious danger more than once and the ticking clock really helped ramp up the urgency of the whole thing. The visual effects in this episode were absolutely stunning as well so it all came together to create a really dynamic set piece. Combining this with John trying to rescue Ridley as well as the near miss for Thunderbird 3 at the end really enhances the whole thing.

I was impressed that the episode managed to find a good use for Kayo who went to Fischler’s facility and sabotaged his access to the engine he was using to redirect the comet. It was a very small moment but the way she effortlessly walked in, did what she needed to do to stop him interfering and left was very slick. Kayo’s a great character and it’s always fun to see her skills used in inventive ways.

One thing the episode lacked was a reason for Virgil to be there. Him being on Thunderbird 3 added absolutely nothing that couldn’t be accomplished remotely. He had the knowledge of comets to help with the drilling but he could have provided all of that from Tracy Island. I’m all for seeing the characters put in different situations but  when they don’t really add much to the experience then it feels like a wasted opportunity. 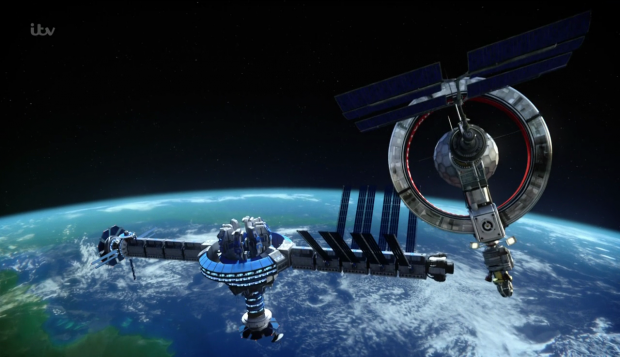 An exciting space-faring episode that created a really dynamic and tense set piece with a lot of elements. The visuals were stunning and seeing the characters think on their feet always makes these things better. John’s interactions with Ridley add depth to his character that we don’t often see and the shades of attraction between them is a nice touch. The use of Kayo in this episode was minor but incredibly effective at showing just how formidable she can be. Fischler is fairly weak as antagonists go but having him appear to be a nuisance seems to be the right way to go. The fact that there are no consequences for him almost destroying the Earth is somewhat weak but that might be picked up later. Virgil tagging along on Thunderbird 3 felt a bit weak as there was no significant reason for him to be there. He could have provided everything from Tracy Island so there is still work to do in using characters more effectively.