Thunderbirds Are Go sends Thunderbird 4 to the lost city of Atlantis when a wayward explorer puts himself in danger.

This season really has had a lot of Thunderbird 4 and that is definitely a positive thing for purely selfish reasons. I’ve mentioned many times that Thunderbird 4 is my personal favourite so I always enjoy seeing it in action. It doesn’t mean anything if the episodes it appears in aren’t any good though so does this episode count among the better ones? The short answer is that it isn’t bad but it’s brought down by some significant flaws. 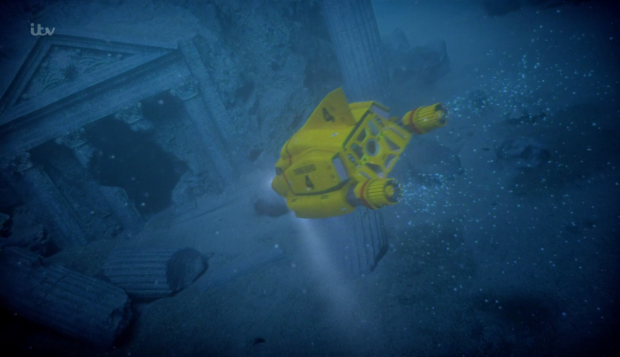 The most major issue is that it’s another “idiots in danger” type story. I know this is a show about an organisation that rescues people in really unique situations but it doesn’t mean that every episode needs to follow that mould. Early in the episode it felt like this might be a story about scientific discovery that would give Brains something more to do than problem solve and fix the damaged vehicles. Adding in Francois Lemaire (Jack Whitehall) was unnecessary along and every scene he appears in was marred by irritation.

In theory saving people who are selfish and ungrateful sends a message to kids that everyone is important no matter how unlikeable they are but I’d say that this show has sent that message a number of times. This could have been an episode about the importance of preserving history and the excitement that can only come from scientific discovery.

Another flaw is that Thunderbird 4 episodes are limiting by design as there is only one Thunderbird that can go underwater -Lady Penelope’s car doesn’t count- so the story can’t have the variety that other types of rescues can bring. All Virgil can do is sit and wait for Gordon to return which isn’t all that exciting and lessens the opportunity for Virgil to develop as a character. Not that Gordon does receive any development either but the heavy reliance on Thunderbird 4 this season has left the other craft feeling sidelined. Who’d have thought I’d find something wrong with using Thunderbird 4?

This was definitely Brains’ episode and he does get the chance to step outside his comfort zone when he has to operate in the field rather than at a distance using holograms from the safety of Tracy Island. This changes him in some way as he knows his actions could have a direct damaging effect on him and the mortal danger makes the whole thing feel more urgent from him. 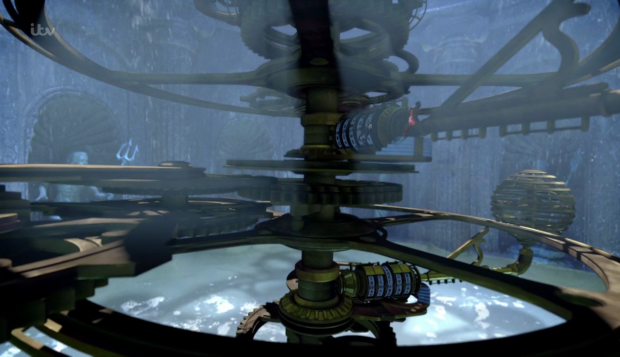 The relic of a lost civilisation

Brains was used well in the problem solving sequences and the ticking clock aspect made the situation feel so much more urgent. There was also a hint of tragedy when Brains knew that the most important discovery of his career would likely be lost. As I said it’s a powerful message about the preservation of history and Brains is the perfect character to champion that outlook.

The design work on Atlantis and the ancient computer was excellent. It definitely felt like the advanced relic of a lost civilisation and the underwater ruins looked appropriately run down. Weta always do a fantastic job bringing the visuals to life and this is one of the most striking examples.

A solid enough episode with a few flaws that drag it down. The rescue element wasn’t at all necessary as the message about the preservation of history and excitement that comes with scientific discovery was powerful enough. This was a good vehicle for Brains who was outside of his comfort zone by being in the field. The heavy reliance on Thunderbird 4 this season has been limiting in some respects as the other vehicles aren’t really being used which lessens the opportunities for the other characters to develop. The design work was stunning as usual with the ruins of Atlantis coming across as the relic of a lost civilisation.