“Up from the Depths Part 1”

Thunderbirds Are Go brings back the Mechanic who goes after a crashed prototype Thunderbird piloted by none other than Jeff Tracy himself.

It’s funny how I was saying just last week that I’d like to see the show start to explore the past and give more insight into the man that Jeff Tracy was. This episode doesn’t quite do that but it does give more of a sense of what his relationship was with his sons. 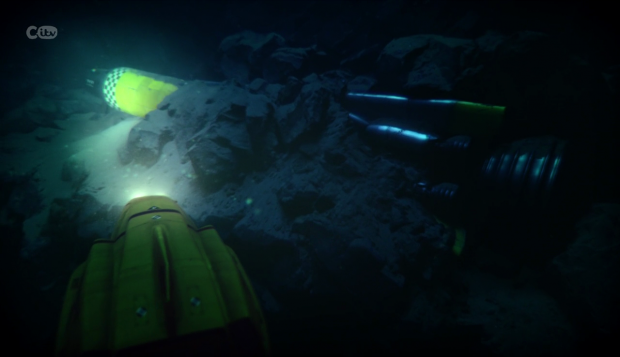 A relic of the past

This is triggered when deep sear researchers discover a crashed prototype Thunderbird called the TV-21. The backstory is that it was the precursor to Thunderbird 1 and was ditched in the ocean when the Hood sabotaged it. Apparently Jeff had a personal attachment to it and was heartbroken when it was lost. This isn’t much in the way of insight but it is more than we have ever gotten. From this we can gather that Jeff Tracy was a passionate man who believed in International Rescue so completely that he was attached to the machines that would help make that dream come true. I’d still like to see a flashback or two someday but this is definitely a step in the right direction.

The discovery of the TV-21 also knocks the brothers off guard as they are excited about finding something connected to their father. This affects their judgement which allows Kayo to shine by seeing things from a more rational point of view. She regards the discovery as suspicious and advises caution. Her being the voice of reason unconnected to Jeff in the same way adds some depth to the ensemble of characters.

I personally feel spoiled by the abundant uses of Thunderbird 4 this season. It’s a completely personal thing but it is my favourite and I love seeing it in action. This was a great episode for it as well as there was no shortage of jeopardy deep into the Marianas Trench. Thunderbird 4 is used effectively and Gordon is very calm under pressure -pun definitely intended- as well as being creative in the way he approaches problems such as using the various tools to try and free himself from the Mechanic’s grip.

It was also great to see the TV-21 be used for nostalgic reasons. Gordon gets to wear the old hats from the 60s TV show. This was a really nice piece of fan service that allowed an element from the original series be used in the context of the history of this show. It’s an important moment as it lets Gordon be reminded of his father. 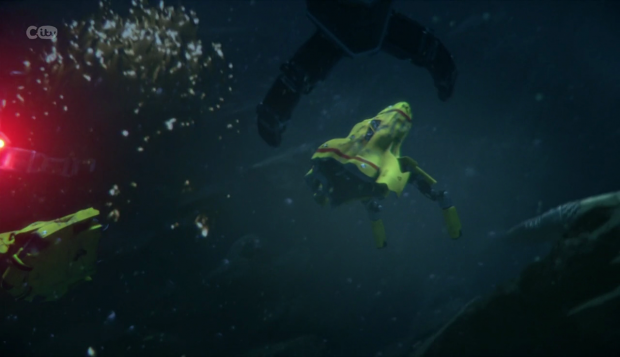 One thing that kids cartoons tend to be known for is the lack of real threat since it is known from early on that the heroes will win and the villains will limp home to their lair defeated. This episode steps outside that comfort zone that Thunderbirds Are Go has stayed in so far by having Thunderbird 4 destroyed. I’ll admit that I found this to be a big shock as I expected Gordon to escape at the last second. The destruction of Thunderbird 4 sends a powerful message that the Mechanic is not to be trifled with and that he represents a legitimate threat to the team. He has no problem using everything at his disposal to get the job done and this makes him very dangerous.

The fact that he succeeds in his true goal of stealing the TV-21 also shows how dangerous he is but this is part 1 of a 2 part story so I suspect that this will be resolved next week. There is also a compelling mystery around why he wants it when he seems to have access to devastating technology of his own.

This is the first episode that allows the brothers to directly interact with the Mechanic albeit through holographic communication. Scott’s “tough guy” speech really needed work as the Mechanic’s reply was far better. Scott was probably supposed to sound more bad-ass than he actually is but this didn’t really work. 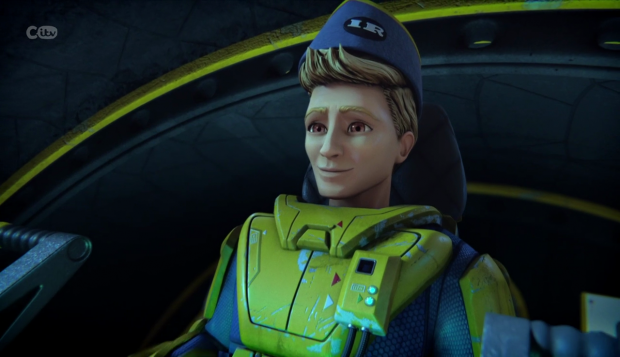 A great episode that explores the relationship Jeff had with his sons as well as raising the stakes by having Thunderbird 4 destroyed. This shows how dangerous the Mechanic is and worked well as a shocking moment. Having the TV-21 in the story allowed for some nostalgia as well as giving some insight into how the brothers remember their father. The Mechanic stealing the TV-21 was an effective cliffhanger and I look forward to seeing the resolution next week.