Timeless takes us to Nazi Germany, 1944 where the team meet Wehrner von Braun and Ian Fleming as Flynn continues his plan to mess with history.

Once again, the show starts out by showing history as it happened uninterrupted. This is starting to be an anchor so that the viewer knows where the threat to history comes from but I feel like it is a bit condescending sometimes as usually this exposition is handled by Lucy about five minutes into the show anyway. 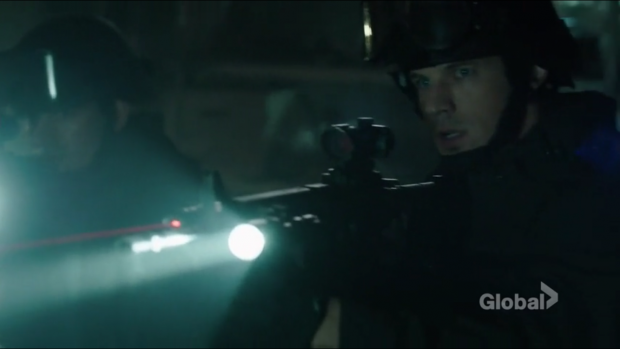 This episode carries on from the end of ‘Atomic City‘ as the team are chasing after Flynn and Anthony after they stole the atomic weapon. The team locate where they are hiding in the present through Jiya which seems awfully convenient given that  Jiya only recently thought she might be able to locate Flynn’s ship. Wyatt as usual is to late to stop Flynn and thus the team must go back to 1944 to Germany to save history.

This leads to a spy style adventure that involves the world famous author Ian Fleming (Sean Maguire) who was in Germany at the time working for MI5 as a spy and the rocket scientist Wernher Von Braun (Christian Oliver) who is in charge of creating the V2 rockets. Which makes you question whether Flynn’s goal is to supply the Germans with a working Atomic weapon before the US could develop theirs thus changing history.

It’s nice to see the story progress out of America as the last few episodes have been fairly American centric which led me to believe that the time machine could only travel through time but not locations. This turning out to not be the case means that the show can explore world history which opens up a whole host of new story lines.

As usual the set design and costumes are very well done so much so the costume department gets a small shout out in the show in the introduction of the wardrobe warehouse which houses a plethora of costumes from all different times. It answers the question of where the team keeps getting their Clothes from at inopportune times and also so fast. then raises other questions of what were these clothes originally intended for if not the mission they are currently on though this probably should have been introduced before this point considering they have been playing historical dress up for a while now. 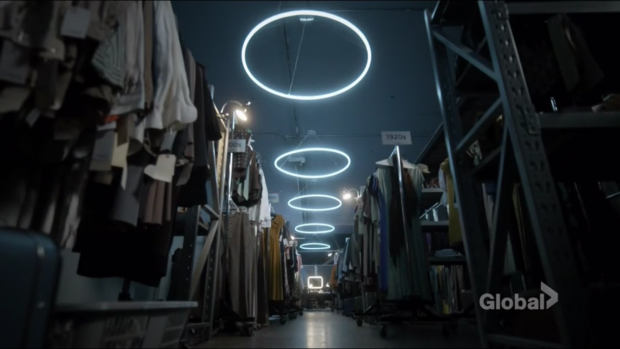 This leads to some contention between Wyatt and Lucy as she wants to preserve the timeline but all Wyatt sees is an enemy in front of him he needs to kill. This is shown through out the episode from Wyatt killing the Nazi in the road or him wanting to take a shot at Flynn and not mind about the fact that Von Braun may be hit in the crossfire thus altering history to the point that maybe man doesn’t land on the moon. This contention between Lucy and Wyatt’s ideals are where the show really thrives and shows its difference from other time travel series of the same ilk, they explore the consequences and the hard choices where as most other shows tend to just use the time periods as a back drop so its a nice change to the genre.

Wyatt still feels he is in the right most of the time mostly when he decides to rope Rufus into disarming the V2 rocket to save hundreds of allies and civilians from its devastation. Wyatt later shows more depth to his character by showing slight jealousy over how Ian Fleming keeps ‘hitting on’ Lucy I’m not sure the show needs a love angle like this as its a time travel sci-fi show more than a drama especially when Wyatt’s motivation seems to be to save his dead wife. Another facet to Wyatt shown is he is a massive James Bond fan but not just the movies he enjoys the books. This shows that he is more intelligent than was originally portrayed even with a short joke between him and Ian Fleming in the ‘never say never’ line.

Lucy starts to show cracks in her demeanour through all the time travel she has been doing of late from watching Abraham Lincoln’s assassination to the Hindenburg exploding and then last week knowing that people she interacted with all end up meeting horrible ends. The fact that she knows consciously that she cant change history and yet has to live through these events with the fore knowledge of what is to happen shows that in her heart she wants to change the future but a calmer head knows that changing the future can have dire consequences, such as her sister no longer existing so now she errs on the side of caution to keep history in tact.

Lucy’s PTSD is well established from having the shakes in the time capsule to zoning out when Wyatt enters the room. This leads to a nice exchange between the two concerning their backstories with Lucy’s car crash illustrating that she feels out of control every time she time travels. Wyatt tries to help her get her over the ‘hump’ as he says. This is a nice change to see the two on the same page as usually they are arguing over whether they should intervene in history. This may be what drives her to start the journal as a coping mechanism for the stress of her current situation. 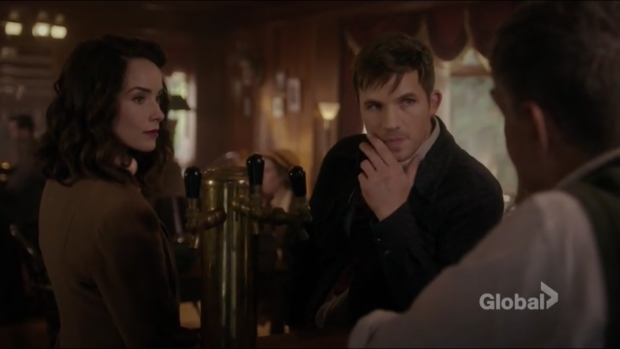 Wyatt and Lucy trying to find the informant in 1944

One of the famous figures of the week, Ian Fleming (creator of James Bond) was a really good character and was different to the last few episodes where the team protected a historical figure. Ian Fleming happened to be the allied spy hiding out in Germany at the time. Which was a nice change as usually the team knows who they are going to meet so this was a nice surprise. His impact is almost instantaneous on the group from talking through what was disturbing Rufus (more on that later) to helping the team accomplish their mission of stopping Flynn. He was the real lynch pin in the team’s efforts this week which was nice to see as usually the team fumble around and everything is haphazard so it was good to see the team carry out a well executed plan instead of Wyatt’s usual shoot now ask questions later style.

Sean Maguire plays the part of Ian Fleming well. He embodies all the traits you would imagine of the creator of James Bond from his way with the women to having a plan all the time and his espionage tactics. Whether this was true of the real man or not it certainly evokes a sense of James Bond in the man. Even when they are almost captured you can imagine it being a scene from a Bond movie with the evil villain.

Ian Fleming and Wyatt are very similar in their views of doing good at the time and be damned with the consequences in their view of killing Von Braun. With Fleming we got some backstory as to his motivations to want to be a spy and see Von Braun dead. Fleming was in London when the bombs fell and killed his brother. He feels some guilt/responsibility for this as he was with him at the time. This sort of exposition of the historical character of the week really gave the character more weight and felt like less of a throw away, so I hope the show continues on down this route. The fact that Lucy manages to convince both Wyatt and Fleming to spare him and hand him over to the allies is a testament to how she can still in some way control the situation even to the point of spurning Fleming’s advances on her at the end of the episode.

Flynn is again not shown much in this episode he seems to constantly be working in the background it kind of makes it hard for him to be a formidable villain for the team to face when he gets so little screen time, his motivations are still unclear all we know is he wants to destroy America and Rittenhaus. It’s nice that what little screen time he had in the episode later on we saw some conflict in the character in that he hated the fact he had to be associated with Nazi’s to get his plan accomplished but was willing to do what it took to achieve his goal which turned out not to be a nuclear detonation Abducting Von Braun  was always the plan so that he could be handed over to the Russians thus changing how history unfolded from the Cuban missile crisis and the space race to land the first man on the moon; two events that Von Braun was influential in. 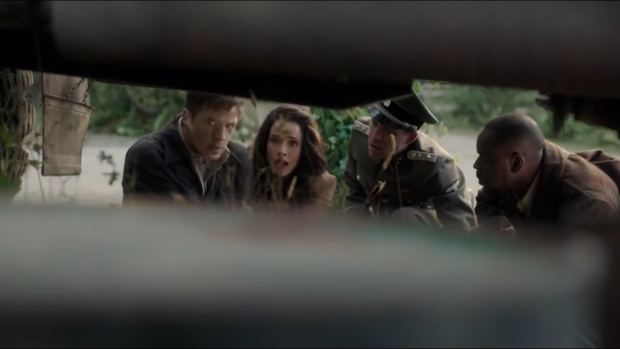 The team and Ian Fleming trying to stop Flynn

Von Braun himself was really just a pawn that was fought over between the two sides and the only real interaction he had at any point was with Rufus in which he was asked how he could live with what he was doing. Von Braun’s response was quite powerful in that it wasn’t his intention to cause harm all he wanted to do was get the rockets off the ground and in the grand scheme of things all he wanted to do was get man to the stars and the moon and this was the only way he could do it. In Rufus’s eyes he couldn’t handle this but its how he turns the theory of how it was never his intention to cause harm and destruction and this resonates in how Rufus’s actions to create the time machine with his colleagues had started off with good intentions but has been used for destructive purposes was a nice exposition.

Rufus was having a hard time at the start of the episode with spying on his friends and through out his journey this episode he learns a lot of who he is. His conversations with Ian Fleming in particular are most compelling in that how Fleming deals with being a spy is to trust no one and his motivation is ‘always to the mission’ (a nice nod to Sean Bean in Goldeneye).

This puts things into perspective for Rufus and the other conversation with Von Braun reinforces his decision that he is not cut out to spy on his friends leading to the confrontation with Conor who we learn has been working for Rittenhaus this whole time but the way he explains it with such fear in his voice leads us to believe that Rittenhaus may well be the real villain working in the shadows and raises more questions as to which side -if any- is right? The encounter at the end between Rufus and what we can assume is an agent of Rittenhaus where they threaten his family if he doesn’t help them more or less confirms this. 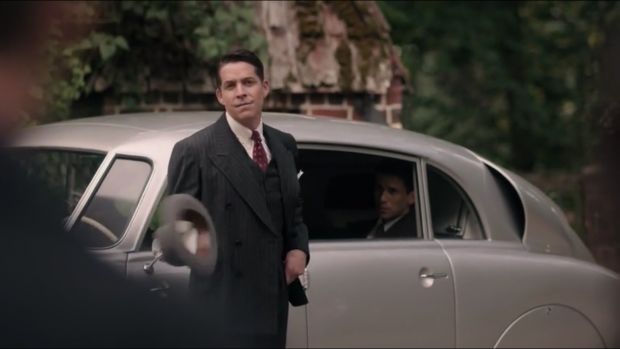 The team is becoming more fleshed out but the main villain is still yet to be truly revealed with Flynn still being the weak link. We get more insight into his character and how he is willing to do anything to accomplish his goals but there is still a lot missing. The main mystery of Rittenhaus is the biggest question mark but the episodic structure of various time periods as the backdrop of the stories with interesting historical guest stars has the show firmly in its stride.