A new time travel show starts with Timeless and the first episode sends the main characters back to the Hindenburg disaster.

So much time travel exists in fiction that it’s hard to imagine that anything new can be done. DC’s Legends of Tomorrow shot for originality by adding superheroes to the mix and succeeded to a degree but what does this NBC show have to offer that’s new or interesting? 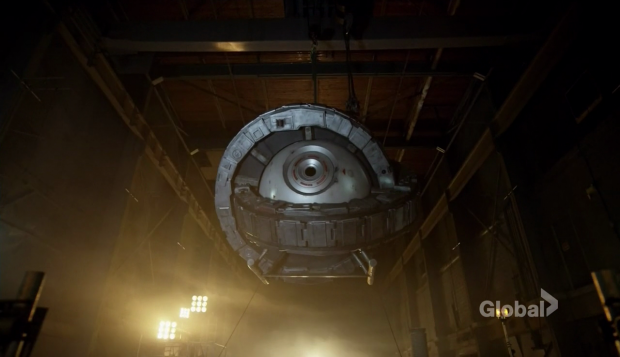 It’s not the TARDIS but it’ll do

In short, not much but don’t take that as a bad thing. Time Travel has been done a lot and innovation is difficult because there are only so many schools of thought on the rules of this thing we as a species currently can’t do. Timeless decides to play it pretty safe while shooting for something wacky and fun.

It’s a solid angle to take and the show broadly achieves that in this episode at the very least. It can be a fun concept so it’s good that a show exists that intends to have some fun with it.

The basic idea here is that a villain by the name of Garcia Flynn (Goran Visnjic) steals a time machine so that he can go back in time to derail America’s development by sabotaging important moments. Why he wants to do this is unclear as yet but the fact that he does is enough for now. Sadly as a villain he’s almost completely forgettable as the show seems to confuse mysterious with absent but as a motivator to get the plot moving it does the job.

His first stop -as far as we know- is the time of the Hindenburg disaster and it turns out that he wants to make sure that it doesn’t blow up according to the history we know so that it can actually blow up when more historically significant people. Rockefeller, the United Nations co-founder, the man behind the D-Day strategy, Omar Bradley, and helicopter inventor Igor Sikorsky are specifically mentioned. Their deaths would cause significant developmental problems for the United States so as targets they are pretty high value. 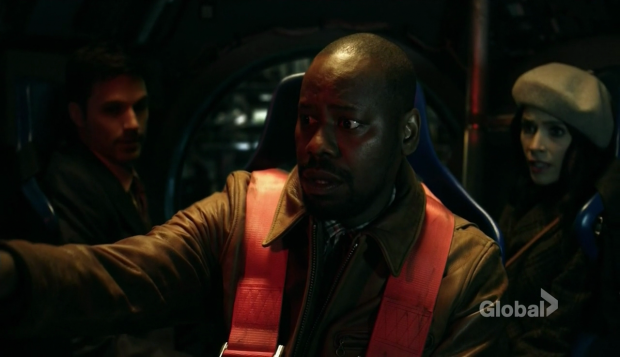 As you might expect an elite team are recruited to stop them. This consists of broody soldier, Wyatt Logan (Matt Lanter), tech genius, Rufus (Malcolm Barrett) and plucky historian, Lucy (Abigail Spencer). On some level these choices make sense as a historian would have an idea of what went on at the time and how to react to it, a soldier can do the necessary dirty work and the tech guy can pilot the time machine as well as fix it when it inevitably breaks.

As characters go they aren’t too bad either. Lucy is outspoken and amazingly intelligent to the point that she’s a walking encyclopedia right down to the minute details. Wyatt is a strong and silent soldier type but has plenty to say given the chance. Rufus is a friendly guy who can be really confident when he needs to. The three characters already have a solid dynamic and are lots of fun to watch. There are the standard hints at a potential romance between Wyatt and Lucy but they aren’t consuming the show as yet so I’m fine with it.

Lucy and Wyatt both have the strongest motivation to get something out of time travel. Wyatt lost his wife at some point in his past and sees this as a way to save her. Lucy has a sick mother (Susanna Thompson) who she wants to see healed. She also has issues at her former job with being recognised for everything she is. Rufus is along for the ride because he has been told to but there is a reveal late in the episode that shows he isn’t all that he seems. For some reason he has to record the interactions between Lucy and Wyatt and he’s uncomfortable with it. Time will tell why I suppose.

These are very superficial ways to anchor the characters but as an introduction for the pilot episode it works well enough. I’m interested enough to see what they get up to in the next episode so the pilot does its job. 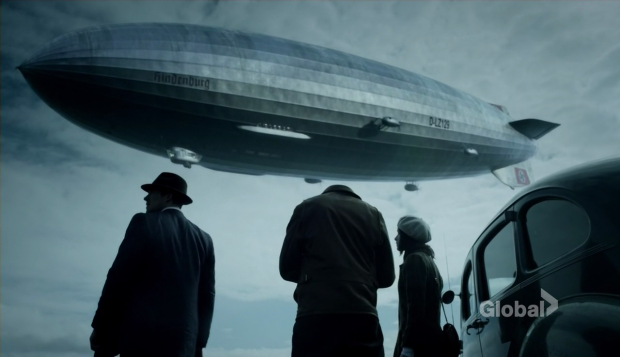 The Hindenburg in all her glory

It seems that the structure of this show is that the team will travel back in time to play a part in well known historical events. In this episode it’s the Hindenburg and I’m sure we can look forward to the Moon Landing episode, the JFK assassination episode, the Titanic episode and all manner of other well known events. Using the Hindenburg for this episode was a refreshing choice actually as it seems relatively untouched in fiction; at least in my experience.

The episode plays out with the team changing the past by having the Hindenburg destroyed a few hours later than planned. This tells us important information about the time travel rules in this show. Events are fluid and can be changed. It is suggested that some things are meant to be and will happen anyway but that is merely speculation on the part of Lucy so it remains to be seen if that will turn out to be the case.

There are a number of mentions of not being able to travel back to a point where they already exist they only have one chance to succeed in a given mission. Why they can’t send a different group of people for a second attempt isn’t covered but something tells me they didn’t think of that. I dare say this is a rule that they will break at some point when the stakes are at their worst.

Changing the timeline has personal consequences for Lucy who wins by her mother no longer being sick but also loses by having her sister wiped from history. It’s really harsh as consequences go but shows that the events that play out in this show will have consequences. She also finds herself engaged but that’s less interesting than her erased sister. 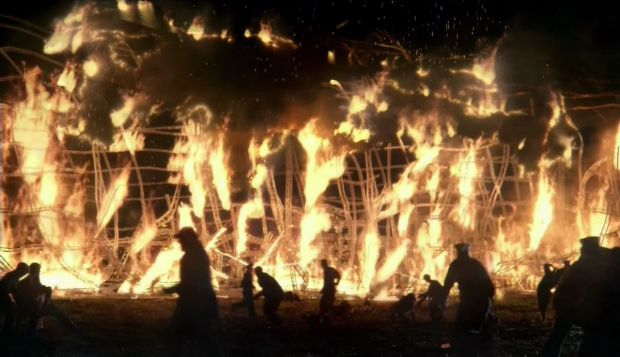 One major failing the episode has is how fast everything seems to move. It feels like no time at all between the characters being introduced to time travel and hopping in the time machine. Nobody has any time to adjust and everyone seems to simply take it in their stride. I found it jarring just how routine it seemed to be despite it being new and exciting. Perhaps taking some time to digest the implications would have improved things.

On a visual level the show is really impressive. The depiction of the Hindenburg disaster looks good and the creation of the period setting on a budget is convincing enough. Considering the production team will be scaring up a new historical era in every episode it all looks really good so far.

Another thing the show does well is the depiction of racial inequality. Rufus objects to travelling through time as being black in the past is never going to be fun. The handling of this is fairly on the nose at times when he mentions a list of famous black people to highlight how ignorant someone is. There is also elements of subtlety with the mention of sitting at the back of the bus. Considering the show could have simply sent 3 white people into the past and not tackled this at all I do have to admire the attempt if not the entire execution.

The show has many of the usual science fiction trappings outside of time travel and the consequences of changing history. There is a shady organisation who aren’t what they seem, a wider story that we don’t have all the pieces of quite yet and the promise of some sort of payoff in the coming episodes. Just why is there a book written by a future version of Lucy and what is the mysterious “Rittenhouse”? I’ll be sticking around to find out. 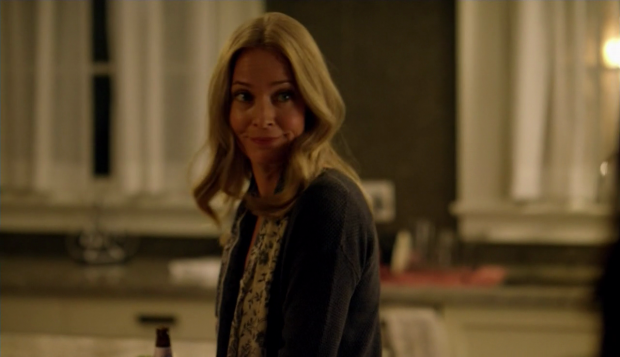 Well this is new

A fun show that focuses on being entertaining rather than ground breaking or original. The characters are solid, the acting is good and the premise of taking trips back in time to famous historical events has a lot of mileage. There is enough depth and there are enough questions to keep me interested so far and I look forward to seeing more.