Timeless takes us to March 1836 to the days before the battle of the Alamo at San Antonio. This is another chance for Flynn to disrupt the time line by preventing the revolution that occurred after the battle was lost. Everyone fought so bravely and ultimately died but their sacrifice spurred on a revolution that Won the war but the question of whether the team can save the timeline without altering it remains.

Timeless is back in America again as the main villain Flynn continues his rampage to bring down the US government and Rittenhaus who we were briefly introduced to at the tail end of ‘Party at Castle Varlar‘. It seemed we might get some more answers to the questions this raised in the opening minutes of this episode but it was glossed over in favour of more pressing concerns  like Flynn and what maniacal plan he had for us this week were thrust forward instead. I don’t particularly mind Flynn as a villain but his quest against Rittenhaus is kind of a weak selling point for me. If Rittenhaus was more of a threat than a shadow that hasn’t truly revealed itself his justification would feel more powerful. 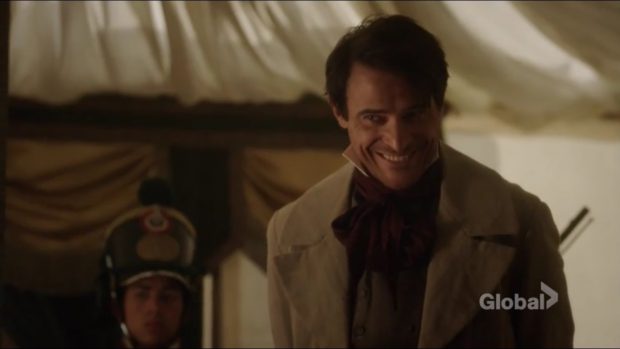 Flynn is trying his hardest to finish the Alamo fast

Flynn’s motivation this week is again killing some one of historical importance; in this case William Baret Travis (David Chisum) and causing the letter to never be written that spurs the rest of the area to end General Santa Anna‘s (Alex Fernandez) rampage. In meddling with the timeline however he accidentally condemns everyone in the fort to die where as originally the women and children were allowed to live. It is strange to see this conflict in Flynn as he tries to fix the error he has made by trying to change the general’s mind to no avail, it makes me think that Flynn is not the villain he has been portrayed as so far but without the written house story line coming through it is not clear yet.

Wyatt being ‘fired’ at the beginning of the episode felt a bit disjointed as he as only at most had 3-4 attempts to kill Flynn and each time protecting the timeline has taken precedence over doing so. Having his War history brought up at the beginning whilst he was being fired lead to him having to relive the past where he faced his own personal ‘Alamo’ back in Kandahar which was a nice way of combining the two even though it did seem kind of jarring seeing US soldiers just laying in the middle of the Alamo. It took a minute or two to realize this was a flashback/hallucination/memory, it could have been handled a bit better. 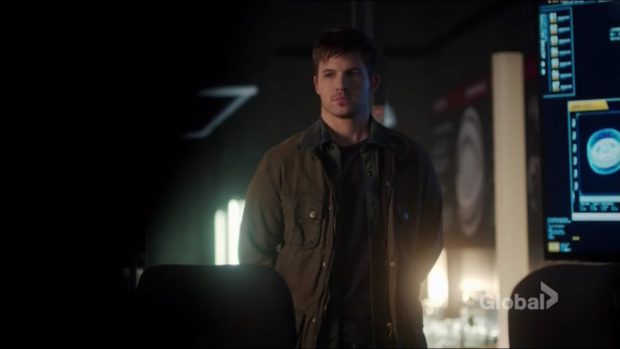 Wyatt finds out his fate before his last mission.

The main reason for the flashbacks are Wyatt is feeling he is unfit to be part of a team because he abandoned his old unit and they all died so he could get intel home as part of his mission. I feel that Wyatt has become more fleshed out in the last few episodes which has made his character more complex compared to the one dimensional character I originally believed him to be.

There are a few historical characters this episode each played there part in helping each member of the team grow this episode. Rufus meets Davy Crockett (Jeff Kobes) who helps him conquer his fears after Rittenhaus scared him so badly at the end of the last episode. Lucy’s historical figure is not really a figure but the letter written by William Baret Travis that is unfinished that she must finish and make as stirring as the original. Wyatt himself learns a lot from James Bowie (Chris Browning) about how to deal with how he left his men behind and the guilt he feels over that, also the fact it was decided over the flip of a coin brings us back to Wyatt’s dislike of fate and how he doesn’t like to think it controls the outcome of things for him. By the end of their time together Flynn has come to realize that even though he feels remorse over the death of his team ultimately it was the right decision but now he has a new team to protect and this is emphasized by how he tells the young John Smith (Sean Michael Kyer) to carry out his duty and take the letter so that history can stay intact. This marks the end of his character arc as he realises that losing his unit wasn’t his fault. When he tells John Smith that being the one to leave can be as hard as being in battle he is really validating that within himself. 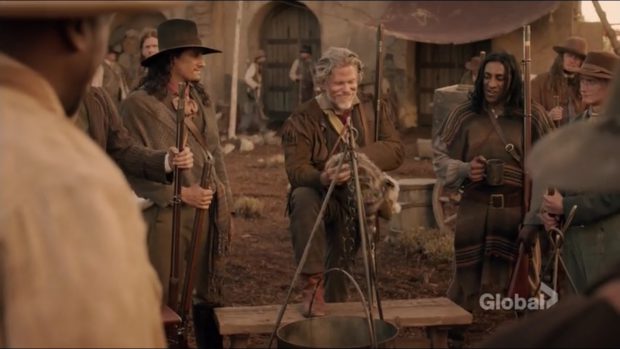 Timeless has again gone all out on the set design it is huge and well made and the costumes are realistic again. I feel half the reason this show works half as well as it does is because of the well made set designs for each era and the faithfully represented era to help the viewer immerse themselves in it. even the set piece action sequences were well done even though they were brief and a lot of the action was left to the imagination the fact that the show is willing to utilize these action scenes to sell the narrative is just as important as the narrative itself.

Lucy this week was kind of a tertiary character apart from a moment in the beginning of the episode with her mother and the same at the end all of this leading to her finding out who her father was. It seems like this will be a red herring and her father will be someone either from Rittenhaus or some how related to the time travelling adventures. Its a time travelling trope that they have not explored yet but with such a small ensemble of key characters I see this more than likely being the case. During her time in the past we see her sympathize with Wyatt and his struggling feeling of surviving his Alamo but the way she convinces him to come back to the present and not die like he feels he should feels a bit forced and almost in the romantic realm of things, something I hope they don’t follow through with as the show doesn’t really need the romantic angle being forced between two of its leads. 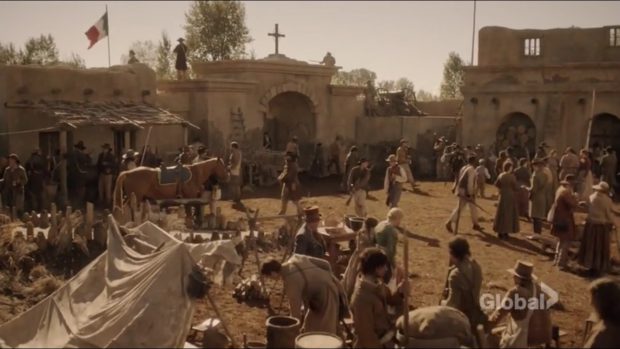 The set design for this series is very impressive

‘The Alamo’ was another by the numbers adventure through time to another historical event that Flynn was going to disrupt and change the future but at this point in the show they should establish what the real consequences are of changing the future and whether he is the real big bad of season one. I am constantly waiting for the other foot to drop in the context of written house and what they truly are, until that happens the show cant really progress the way it should as right now it is just a by the numbers sci-fi time travel experience sure it is pretty and has some good character development but with out the meat and bones of a good compelling season villain or arc it is steadily losing my interest.