With Titans‘ alternation between episodes following the principal story and those taking on meandering side plots, it would follow that we’re due for another of the latter, especially since such episodes are invariably titled after the characters brought in for a one-shot appearance. However, those churning out this tedious slog of a series have finally figured out that it’s possible to actually follow the main narrative while also having a character go off and do something else. 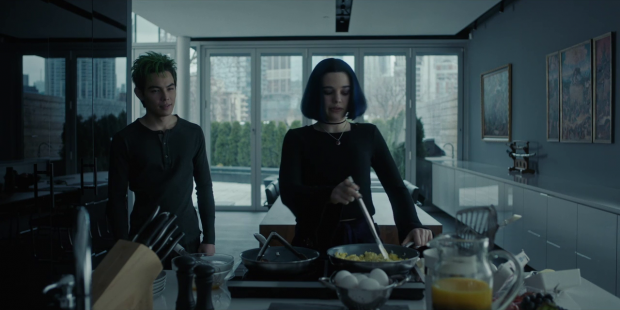 What is it with people cooking eggs in this show?

After having somehow established that the destroyed asylum was the stronghold of the cult who were after Rachel and holding her mother Angela (Rachel Nichols), Dick decides that the group’s quest is over and whatever they were can now disband, or at least leave him alone long enough to go on an urban walkabout until he figures out his new place in the world now that he’s abandoned being Robin. Exactly how they ascertained there were no more of the cult hiding out anywhere is not touched upon, and it seems a bit of an oversight given how insidious such societies can often be. Least of all, where did that hit squad sent by the Organisation come from?

The episode introduces another potentially recurring character in Donna Troy (Conor Leslie), the eponymous Wonder Girl. A sidekick of Wonder Woman in much the same way Dick was to Batman, the pre-existing relationship of the pair is quickly established by their ease with each other, and doesn’t really need the flashback sequence showing them as teenagers to convey the sibling-like bond they share, even if it does establish Donna’s comment about being “older, smarter and prettier” than Dick as being an old running joke between them.

Despite both of them essentially having the same starting point in the world of superheroics, they’ve ended up at rather different points. Donna has abandoned the vigilante lifestyle and now exposes wrongdoing using her skills as an investigator and photographer instead of her Amazonian abilities, to the extent that there are only a couple of throwaway moments where the latter are even used. “I didn’t quit being Wonder Girl,” she later tells him, “I just realised I could do more good being Donna Troy.”

Big sisters are always there for you

Her attempts to take down a poaching and smuggling ring highlight the difference in how the two operate, with Donna using subtlety and manipulation to play a long game and flush out every member, whereas Dick is content to wade in and beat them up one at a time in the same way he’s approached every bad guy problem. It’s a little frustrating that after having just made such a big thing about ceasing to be Robin, he’s acting as though he still is. The difference between the pair is that Donna was never defined by being Wonder Girl, whereas for Dick being Robin was such a huge part of his life it came to consume his very sense of self, so much so that now having abandoned the identity he’s stumbling though an existential malaise barely aware of who he even now is.

The scene at Donna’s photography exhibition emphasises just how out of touch with the everyday world he has become, unable to simply talk normally to other people. His verbalised absent thought of “I wonder what the Penguin’s doing now” might have been lacking in subtlety, but it shows exactly the kind of place his mind waders to when left unchecked, and that he’s got a long way go before he can become a part of regular society. It raises the question of exactly how he got by as a police officer prior to the series beginning, but I assume we’re not supposed to think about things like that.

As for the rest of the group, they’re given something to do by heading off to the rural property Angela owns (or their “secret base,” as Gar excitedly refers to it), and travelling by train means that it’ll take long enough for them to get there that the journey can last the whole episode. 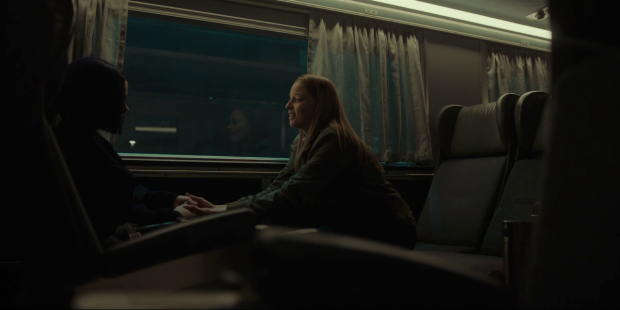 Mother and daughter get to know each other

The interaction between Rachel and Angela provide some of the most touching moments the show has thusfar been capable of. The scant minutes make Rachel truly realise how loved she has always been, giving her answers to questions that it wasn’t until a few days previously she realised she even had. It’s interesting to note that we’re being given honesty about Rachel’s origins but Angela doesn’t even allude to the fact that Trigon is a demon. He isn’t mentioned by name and only referred to as a cult leader, which suggests that she never actually knew what he was, and the fact is being kept hidden now for a big reveal at the series climax. Or that the cult leader was just a man and Trigon was working through him. Whatever it is, it’ll be intruiging to see how it plays out.

Kory’s memory starts to return in between her moments of subtly mocking everyone talking to her when she wants to be left alone, which provide some amusing moments and remind us that there is something akin to a personality under her blank slate that’s so far been barely explored. She’s also still being hunted by law enforcement for her assault on police officers in Origins, but the only purpose served by bringing this up is to instigate an action scene in an episode otherwise lacking in any real kind of threat.

Apparently Rachel’s newfound healing abilities can also deal with memory problems, leading to Kory’s recollection of both who she is and her mission. Unfortunately, this reveals her to be an interstellar assassin sent to take out Rachel, presumably to prevent her from allowing Trigon though and laying waste to all of reality. We end on a cliffhanger moment that for once actually makes you want to see what comes next. It finally seems like we’re actually getting somewhere. 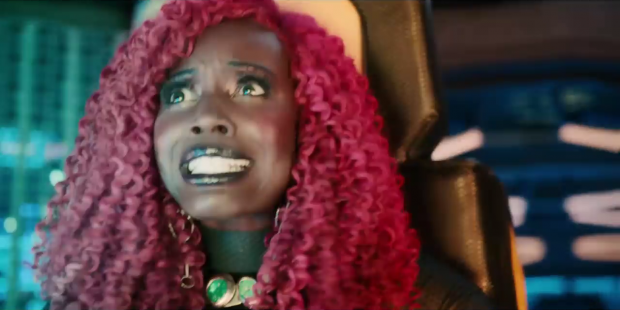 Donna Troy brings with it an increase in focus that offers a glimmer of encouragement that Titans might pull itself out of the mire of tedium in which it’s been languishing for too long. Donna herself is a welcome addition to the cast, and the lingering issue of Kory’s memories is about to become integral to the plot. It’s taken too long and with way too many sidetracks to get here, but it seems we’re about to get some proper relevant story.